Playing the Hits? Robbie Eagles is ready for Desperado 【WGS】 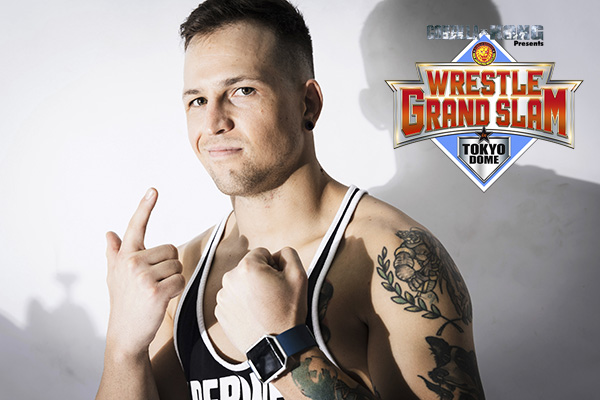 After El Desperado defeated Taiji Ishimori to make a second defence of the IWGP Junior Heavyweight Championship in Sapporo on July 10, one person was not going to wait around for his opportunity. Robbie Eagles issued a video challenge, and is now set to become the first Australian to wrestle in a singles match in the Tokyo Dome, with the richest prize in his division at stake. We chatted to Robbie about Wrestle Grand Slam Sunday.

Or watch in English or French on FITE!

I was champing at the bit to make something happen 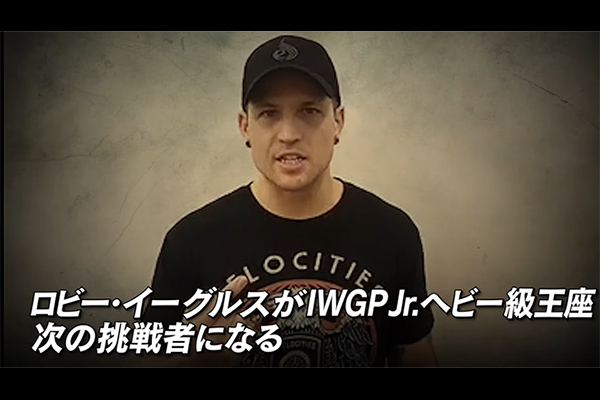 –So Robbie, your video challenge went out in Sapporo after El Desperado defeated Taiji Ishimori for the junior heavyweight title.

Eagles: Well, I was sick of being passed over for opportunities. I had to do what I needed to do to put myself back at the front of the line. So it was a little bit strange to see the video go out and it being a little bit ambiguous…

–You were addressing ‘the champion’ with no idea of who would win the match.

Eagles: Right. I shot that and had it ready to go, so I was really champing at the bit to make something happen.

–Australia has dealt with the pandemic a little bit differently to a lot of countries. Can you fill us in on what you’ve been doing since we saw you at Best of the Super Jr.?

Eagles: Well, I went home after the tour, went through quarantine, which ended just after Christmas, so I celebrated a late Christmas, and then it was a case of wrestling as much as I could.

–Things were quite open in Australia at the start of the year.

Eagles: Yeah, in Sydney where I live things were open, so I was able to wrestle and train, and keep myself ready for whenever a chance came my way. I actually wrestled Mikey Nicholls in Perth as well.

Eagles: Yeah, all part of staying as ready as I possibly could.

It’s not so much about what you do, but how much you want it 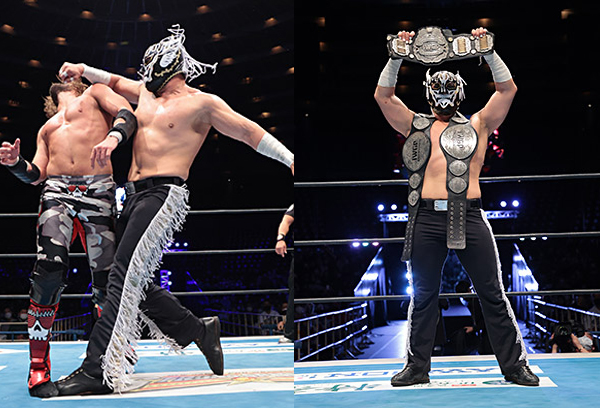 –Whenever there’s a big card on, you’re usually following along on social media.

–So how did it feel for you to see everything that’s happened in the division this year, between Hiromu’s injury, the vacant title, El Desperado winning and everything in between?

Eagles: It was hard, because I would be watching at home and thinking ‘maybe this is my chance!’ ‘No, maybe now!’. I wished I could storm my way to the ring and make my presence felt. You feel like a ghost having to see it from afar.

–It must be quite frustrating.

Eagles: But on the other hand, it’s been great to see the journey that these guys are taking, especially Desperado and the journey he took from that great BoSJ run he had to winning the title in Osaka. He might not have won it the way he wanted to, but it was a Cinderella story for him to finally take the title. And I am glad he did it at El Phantasmo’s expense, because I’m not a big Phantasmo fan, heh. In the end I just wanted to be a part of it, so I was watching with a lot of anxiety trying to think about what I can do. Now it’s full steam ahead.

–Was Phantasmo a motivating factor behind that video of yours? A lot of people were expecting he would be next to challenge Desperado.

Eagles: Absolutely. I saw him after Desperado beat YOH at Dominion. I think he was going to challenge there, but Ishimori jumped ahead. I know he wants to put himself back in that hunt, so it’s really satisfying to know I’m getting a chance he isn’t, because I know he doesn’t deserve it, heheh.

–Desperado isn’t exactly a white hat, but you seem to think he’s a deserving champion. What do you think of his reign so far?

Eagles: I think now it isn’t so much about what you do, but how much you want it. He might bend the rules, but he’s shown how much he wants that title. He’s produced results, and certainly beaten me, so I have to respect that. He has a ton of heart; he could have used an injury or an illness as an excuse, but it’s just fired him up more. 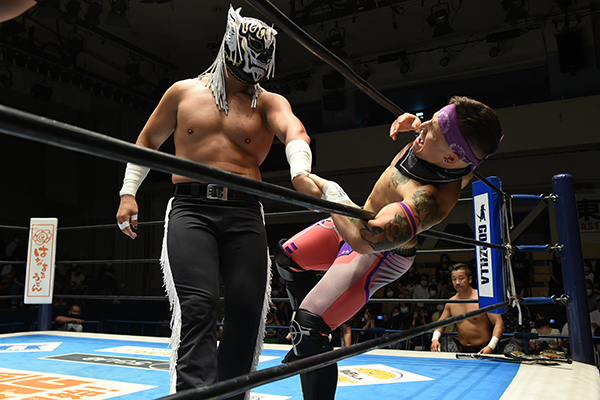 –It’s not a great record for you with Desperado. You’ve lost two tag matches against him, and in Best of the Super Jr. last year. What’s the key at Wrestle Grand Slam for you?

Eagles: I think people have me down as a one trick pony. People think I will focus on the legs, and the Ron Miller Special has helped me a lot over the years, but that’s not all that I have.

–In the Best of the Super Jr. matchup, both of you attacked one another’s legs for a lot of the match, but it was a Pinche Loco that scored the win for Desperado.

Eagles: Right. I watched his match with YOH in Osaka as well, where there was a lot of knee offense. I took notes on that. I really think though that people forget one big thing with Desperado.

Eagles: Most people have forgotten that he’s had surgery on his jaw. There’s no way that’s as strong as it used to be. So that’s an option. Or I might go to aerial offense, and drive the wind out of him with a 450, or I could drop him on his head, and there’s a few new moves the NJPW audience hasn’t seen yet that I’ve worked on in Australia. So there’s a lot of ways I could beat him. 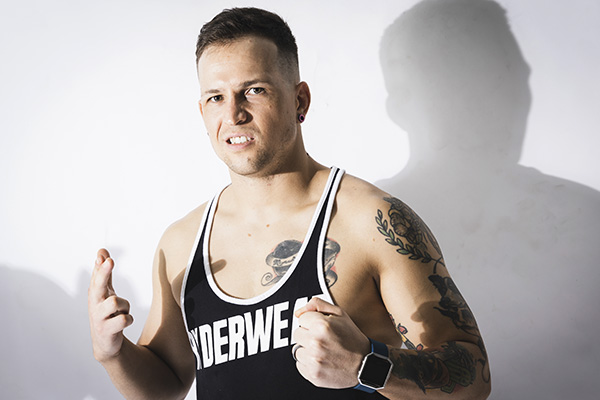 –This is your first main card match at the Tokyo Dome. It’s a little bit different with pandemic restrictions to a jam packed Dome, but there are a lot of eyes on Wrestle Grand Slam. Is the scale of the event intimidating?

Eagles: It absolutely is. Every venue that I wrestle at, from community halls to stadiums, I picture every seat full. I need the pressure to thrive. It doesn’t matter how many people are in the Dome; it’s still the Dome.

Eagles: And so much legacy and great matches for junior heavyweights there. I’ve been watching Ultimo Dragon, Kanemoto, guys like that in the Dome, and I’ve been watching to implement some of the tactics they used in that building to train for this match. It doesn’t matter whether there’s five people there, or 5,000 or 50,000, the Dome is the Dome in my book.

–With the junior heavyweight championship defended in the main event more recently, we’ve also seen longer matches for that title. SHO and Hiromu went past 30 minutes in February, and Desperado and Ishimori went near 30 in Sapporo. Are you training for a long match on Sunday, or do you want to surprise Desperado with a flash pin, or a flash KO?

Eagles: I’ve definitely come out guns blazing and tried to finish matches fast, but I’ve had long matches too. 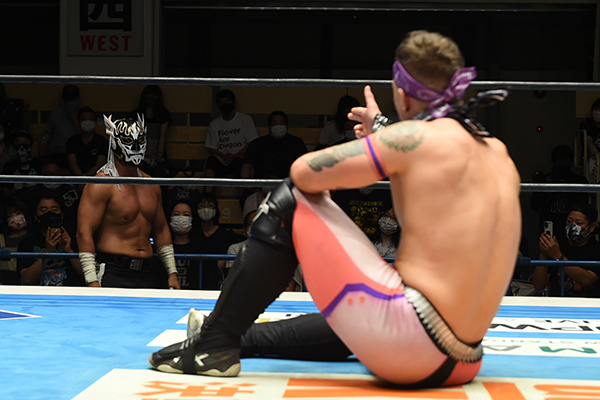 –You vs Ospreay for the junior heavyweight title in Melbourne was the longest in championship history up to that point in time.

Eagles: I think people pidgeon hole the division into a certain speed and style. Now though, we’re seeing them pace themselves, train for longer matches and train to take more punishment for 20, 25, 30 minutes.

–And how are you preparing?

Eagles: A bit of both. I’m training for speed so I can get it done quick, but I’ll also do endurance training. You have to prepare for both. I have a gameplan of course, but I’m not going to reveal it.

–If you come out of the Dome with the title, what would your goals be as champion?

Eagles: It’s fitting that this is happening at Wrestle Grand Slam. Ash Barty just won Wimbledon for Australia, and our team is set to do us proud in the Olympics as well. I want to take some of that energy.

–You have that patriotic pride.

Eagles: I’ll have the green and gold in my heart, and maybe on my ring gear as well. I really want to represent Australian sports, do my country proud, and really do the world proud. I always put everything I have in every match, so I want to be a world’s junior heavyweight champion, and be the champion that everybody wants and deserves. I know everyone in the division is doing all they can to further it, but I want to be among them, and be one of the guys people remember when they talk about junior heavyweight wrestling over the next 20, 30, 40 years.