Zack Sabre Jr. and SANADA go to a draw, while Taichi scores emphatic win over Naito in Osaka 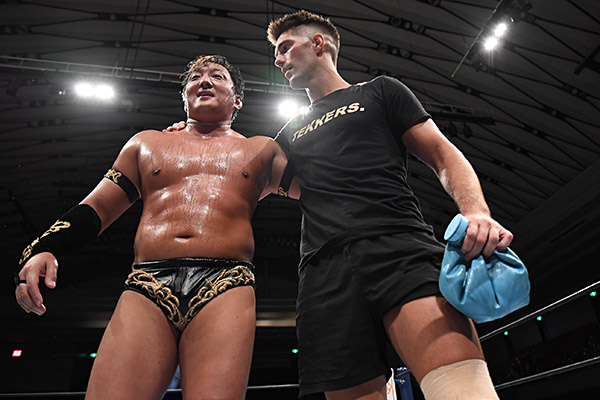 Summer Struggle came to Osaka on July 22 for the first in a double header of events in EDION Arena, both headlined by singles previews of the IWGP Tag Team Championship match at Wrestle Grand Slam in the Tokyo Dome.

The first of the night’s two main events saw Zack Sabre Jr take on long time rival SANADA. Sabre proffered a hand to SANADA at the bell, and Cold Skull accepted for a clean handshake before they set to work, jockeying for position with clean breaks in the ropes. With SANADA tripping Sabre and the Briton stopping short of taking a SANADA armdrag in return, neither man had a distinct advantage; as the pace quickened, it even seemed as if each would simultaneously pin the other before standing up with wry grins exchanged. 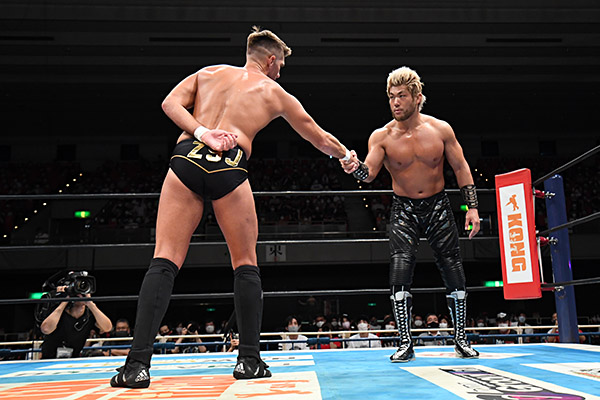 As the two combatants re-engaged, Sabre had the upper hand with a top wrist lock, and after some repeat escapes from SANADA, finally cinched in a tight headscissors at the five minute mark. Even this did not keep SANADA grounded for long though as he used a head spring to escape, and then grounded his opponent with a body scissors that wore away at the Briton. Sabre would work free, but a basement dropkick would see the first significant damage dealt by Cold Skull. 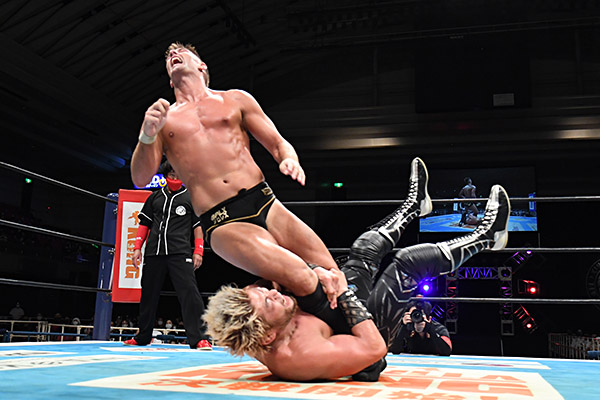 SANADA kept up the pressure on the floor, wrenching Sabre’s knee around the guardrail before landing a knee crusher in the ring. ZSJ finally had a weakness established in the knee, but minutes later was able to flip the script, wrenching SANADA’s left arm and setting to work on the left shoulder both in the ring and out. As the match reached passed 15 minutes in length, SANADA was able to use Sabre’s momentum against him though, and followed with a placha to turn the tide.

Sabre wanted to quickly get the pace back under his control, but an overhead kick was stopped and followed with a standing Moonsault. As has so often been the case in their encounters though, SANADA wanted to put ZSJ into a Paradise Lock, something the Suzuki-Gun member was never going to allow as he went back to the arm. 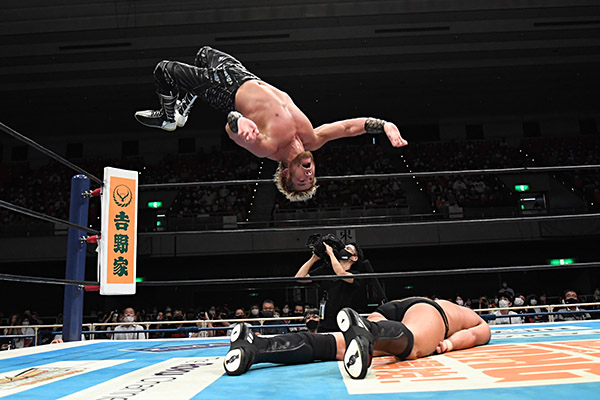 A short blow from SANADA to the knees, and both men were slowed with their respective injuries. Sabre would further punish his foe as he maintained wrist control, but an emphatic Dragon Screw would put him to the mat. Still, Sabre’s instincts would see him raise his knees in countering a SANADA Moonsault, driving his opponent to the ropes as he looked for the Clarky Cat at 20 minutes past.

Still the two men went hold for hold, an overhead to SANADA’s shoulder immediately followed by a Dragon Screw through the ropes. Even in technical holds, the match broke down into hard forearm exchanges instead. SANADA seemed to hit harder, but Sabre would quickly shift  gears, switching to flash pins, expertly countered for a series of nearfalls for both competitors. SANADA finally misdirected Sabre to land a Moonsault across the back, but would be countered when following up. SANADA would trap ZSJ in a ground Tiger Hold, but Sabre would bridge up to force his opponent’s shoulders to the mat as well, the result an extremely rare double fall. 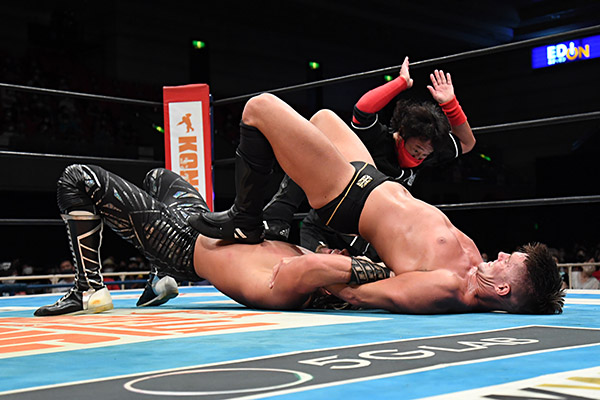 The main event saw Taichi take on Tetsuya Naito in their ninth career singles meeting. After a good deal of posturing, the match began with a similar pair of clean breaks to Sabre and SANADA, but it wouldn’t take long for Taichi to try and take the advantage. The Holy Emperor would be frustrated though, a tijeras from Naito and a signature taunt in ring followed by a baseball slide out to the floor. Here the match differed vastly from the bout before, Naito’s hatred for Taichi coming out with a punishing choke over the guardrail and a tight cravate when back on the canvas. 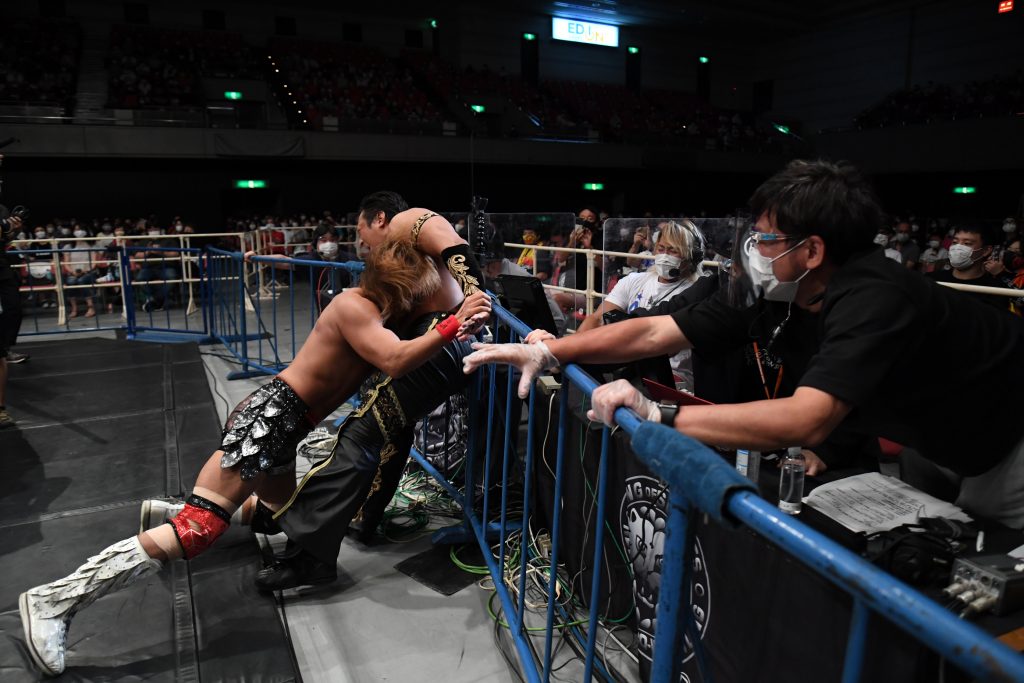 Taichi managed to find a break in Naito’s offense, scoring a jumping high in the corner, before turning the tables on his nemesis with a heavy guardrail shot outside. The former tag champion would go for the current belt holder’s throat inside, chokes wearing Naito down, and the pressure stayed high as Taichi rang kicks off the spine. Yet when Taichi wanted a Nodo-Otoshi, a neckbreaker from Naito forced the match’s pendulum back El ingobernable’s way. 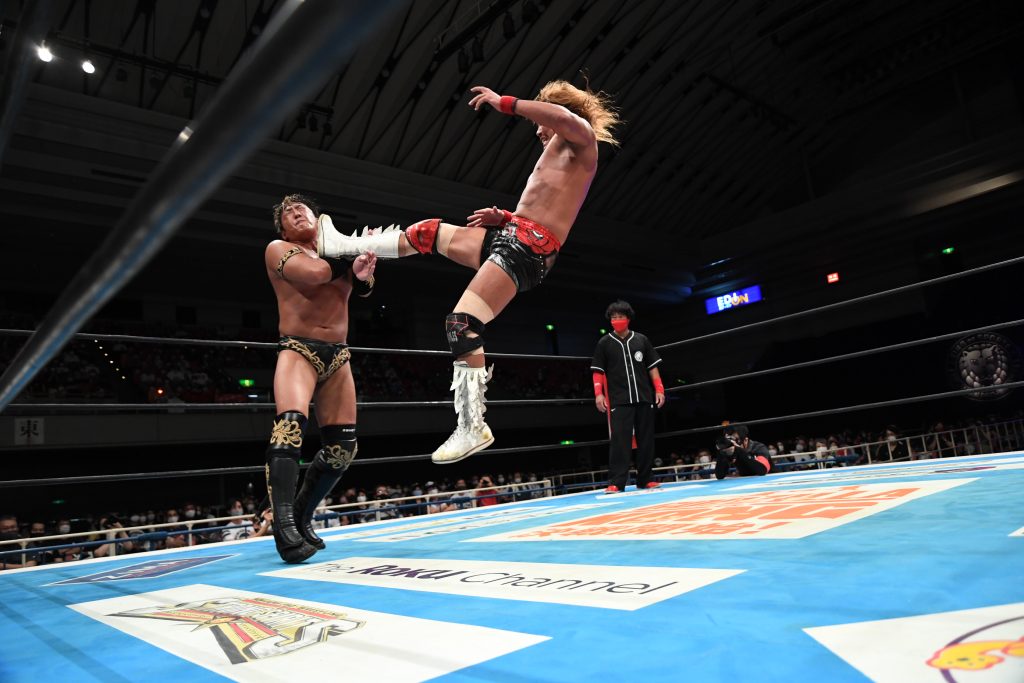 Signature offense in the corner for Naito would be followed by a leg Full Nelson, Taichi held in place until a blow to Naito’s face rocked the tag champion. Back in control, Taichi continued to rattle kicks to his foe, Naito battling back with forearms, but the Holy Emperor having a clear advantage in the standup. Thinking fast, Naito would shove Taichi to the corner, and use the ring for added leverage to pile on back elbows. Naito fought for, and got some of, a Frankensteiner out of the corner, but a Dangerous Backdrop was waiting in response. Despite Naito’s best efforts, an Ax Bomber scored for Taichi, and the Seitei Jujiro would be lo0cked in center ring, as the match began to slip from Naito’s grasp. 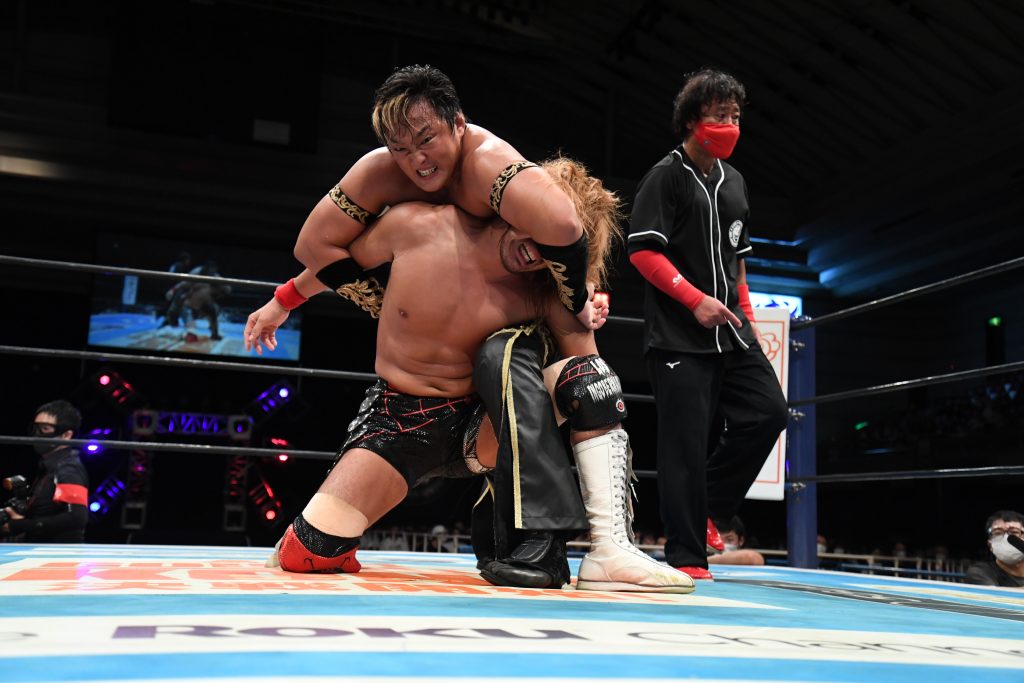 When Naito refused to quit, Taichi went for the Taichi-Style Last Ride, but was stopped and countered with a rope step DDT. The match passing 20 minutes, Naito this time connected with a full top rope Frankensteiner and shaped up for Destino, but found a Patriot Bomb in responsee. Naito was able to get a short Destino shortly after as Taichi couldn’t follow, and though ringing up the arm for the full version didn’t pay off, an enzuigiri had Taichi rattled.

Naito attempted Esperanza out of the corner, but Taichi found an enzuigiri of his own. Naito countered a Black Mephisto and hit Valentia, but the full Destino was countered with a second attempt at the Mephisto, Naito somehow kicking out at 2.9 as the crowd clapped on both men. 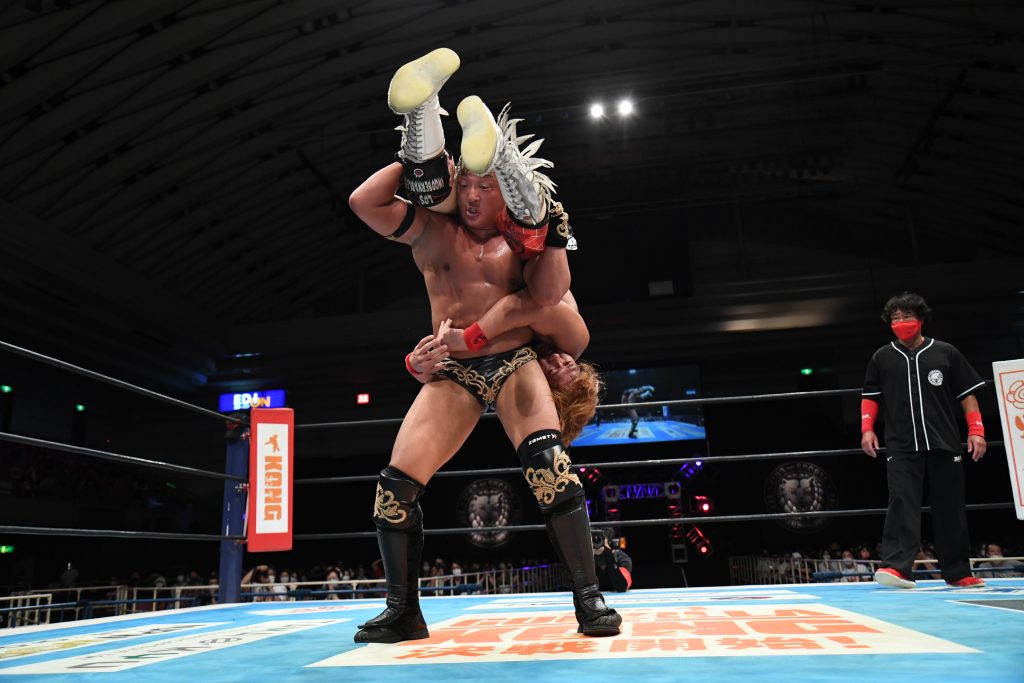 Taichi found his feet first and charged at Naito with a pair of boots, but Naito sprawled out of a Dangerous Backdrop. Both rivals traded vicious strikes, but Taichi landed the Dangerous Backdrop for another nearfall. A thrust kick scored clean off the skull of Naito, and Black Mephisto landed for the victory. 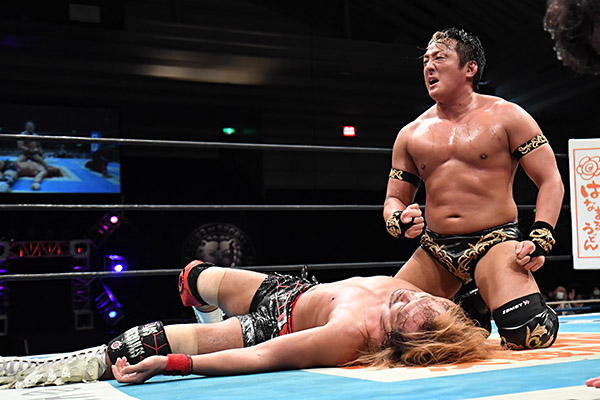 There is little time for taichi to bask in his success, as he faces SANADA tomorrow in Osaka. Zack Sabre Jr. will battle Naito in the main event.