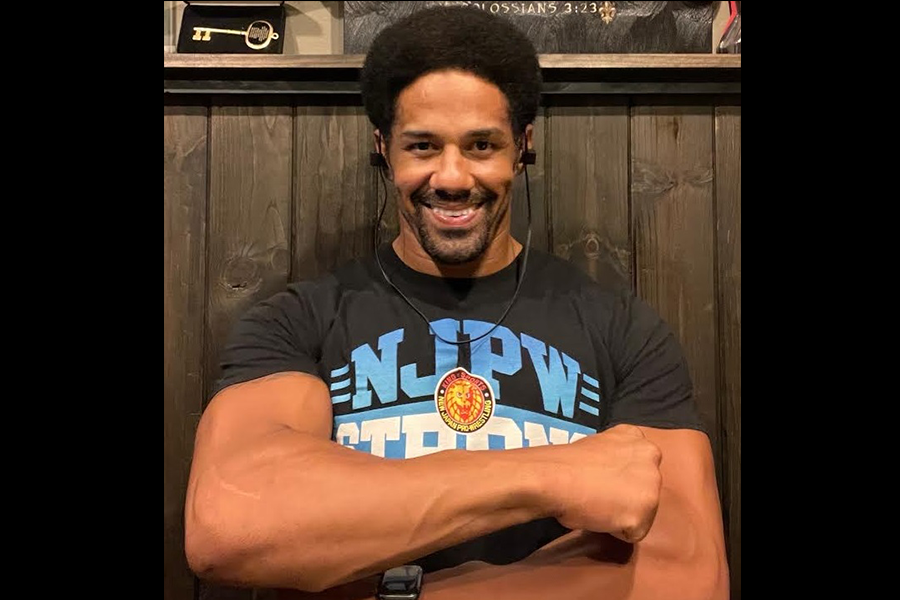 Fred Rosser has been one of the driving forces behind the success of NJPW STRONG, and when Resurgence was announced, bringing fans back to US events for the first time in 18 months, together with STRONG’s tapings with crowds for the first time ever on August 16 at Thunder Studios, Rosser wasn’t going to pass up the chance to be a part of it all. Before his six man tag at the Torch at L.A. Coliseum on August 14 was signed, we chatted with Mr. No Days Off.

Watch Resurgence LIVE in English on FITE! (Live in Japanese on NJPW World; English commentary at a later date)

By the end of the night I felt confident that yeah, I could do this

I’m excited to officially announce I’ve signed W/ NJPW! All I can say moving forward is, don’t ever let your dreams just be dreams because as long as you’re patient & believe in your dreams, anything is possible. Patience is a talent #njpwSTRONG #blockthehate @njpw1972 @njpwworld pic.twitter.com/o6MM4dBPap

–So first of all Fred, you’ve been wrestling on NJPW STRONG as a freelancer for close to a year. Some weeks ago, you posted on social media that you had signed a contract with NJPW.

Rosser: Right. That wasn’t an overnight thing, it was the result of a long journey.

–What started that journey in NJPW for you?

Rosser: It all started November 2019, at Showdown in Los Angeles. I had run into my friend Lance Archer that September.

–He was IWGP United States Champion at the time.

Rosser: We had been in (former WWE developmental territory) FCW together. I ran into him and we talked. He asked how I had been doing, and I happened to say that I had dreams and aspirations to wrestle in Japan. He gave me a flyer for Showdown at the Globe Theater November 11. It was a 7PM start, but I got there at 5PM. After all these years in the business, I still wanted to be there as early as I could.

–Even though you weren’t wrestling, you took the professional approach.

Rosser: And I just really wanted to drink everything in. Feel the ambience and also sit there as a fan and ask myself ‘do I fit in?’ ‘ Can I do this?’ and those questions were running through my head the whole time. But by the end of the night, I felt confident that yeah, I could do this, I could hang with these guys.

I was hungry and committed, and now I’m committed full time 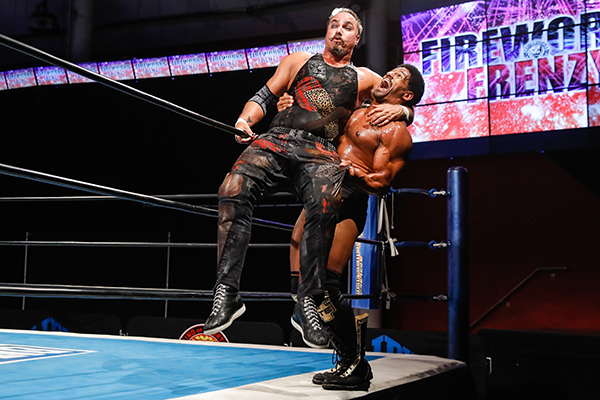 –Going from WWE to NJPW meant quite a change in style.

Rosser: Yeah, and that was a little intimidating to me initially. I had a lot of conversations with my family before I committed to this opportunity on NJPW STRONG as well, to decide whether it was the right time and the right place for me. But they gave me their blessing, and I just went after it with laser like focus. I was hungry and I was committed, and now I’m contractually committed full time. You might see me in other places from time to time, but NJPW will always take priority. I want to be a part of everything that goes on with NJPW STRONG going forward, and to elevate the other talent as well.

–Before you had your first matches on STRONG, you said that this was a ‘bucket list’ destination for you. What were your first experiences with NJPW, and why were you so attracted to wrestling in New Japan?

Rosser: I grew up always wanting to be a WWE Superstar, and I was able to do that, but all through my time there I was watching the NJPW stuff as well. I loved the style, even though it was very physical, somewhat intimidating…

–Who appealed to you in particular when you were watching? 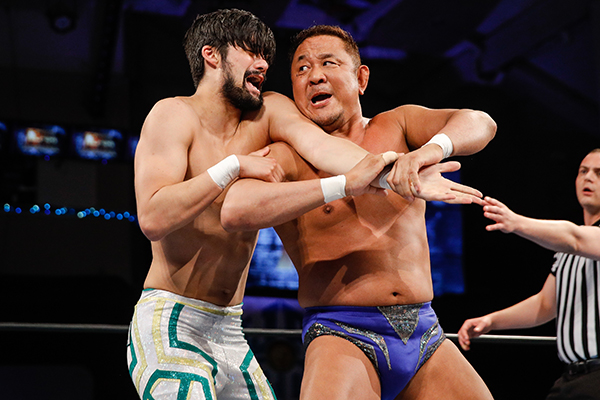 –You were a Yuji Nagata fan?

Rosser: Of course! Blue Justice, 100%. I’d seen his match with Kurt Angle, and Kurt was one of my all time favourite wrestlers. Now Kurt’s retired, and Nagata’s here on NJPW STRONG! I was so jealous of Moxley sharing a ring with him, and Chris Dickinson, and I love Chris.

–Did you interact with him backstage?

Rosser: You know, I was like a fanboy. A little kid, seriously. I have a black set of ring gear and a blue set, and like a kid, I made sure that I had my blue gear that day! I wasn’t sure whether we’d bond all of a sudden or if he thought it was disrespect (laughs).

–So Nagata is on a bucket list of opponents for you?

Rosser: Oh absolutely. Either teaming or one on one, Blue Justice and Block the Hate in New Japan! If I can speak it into existence then I will.

The ultimate goal would be to do something with Tanahashi 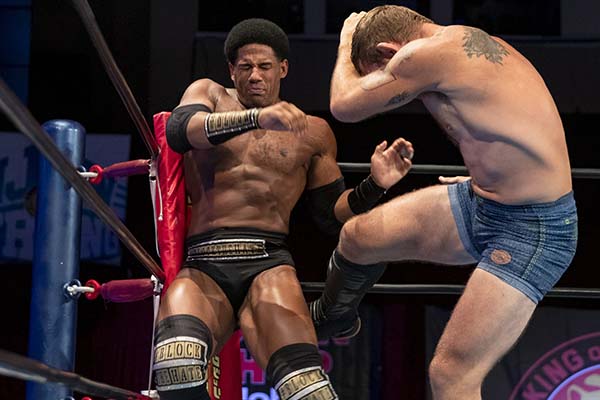 –After you left WWE you wanted to make that step to NJPW.

Rosser: Exactly. When I left in 2017, I did say that I always wanted to pursue New Japan and then having gotten here, I realized that the style that I had thought would be intimidating really fit me like a glove.

–It really has been incredible to see just how well the style in NJPW and on STRONG has really fit you so well.

Rosser: You know, the biggest compliment I could have is from not just my fans but my peers. When myself and Tom Lawlor had that match at Showdown last year…

–The fans voted it the NJPW STRONG match of the year in 2020.

Rosser: Exactly, and that meant so, so much to me. But what Lawlor said about that match as well, much as I may not like him, to say that as soon as we touched, he knew it was going to be special, that meant so much, to have the acknowledgment from a peer.

–And from peers in Japan as well. Hiroshi Tanahashi does colour commentary on STRONG matches in Japan and has said he’d love to tag with you!

Rosser: He and I! You know what they say these days about it all going down in the DMs! We communicate with direct messages on social media, and it blew me away for him to say he was a fan of me. I’m a fan of him, come on! So for him to take the time to communicate meant so much. The ultimate goal for me would be for us to do something together in Japan, but before that the test will be in front of a crowd in the US.

Rosser: The Torch at L.A. Coliseum, and then the STRONG tapings on August 16. Both of those will be huge. I’m a grown man, but I get goosebumps thinking about those nights.

STRONG has the hardest working roster on the planet 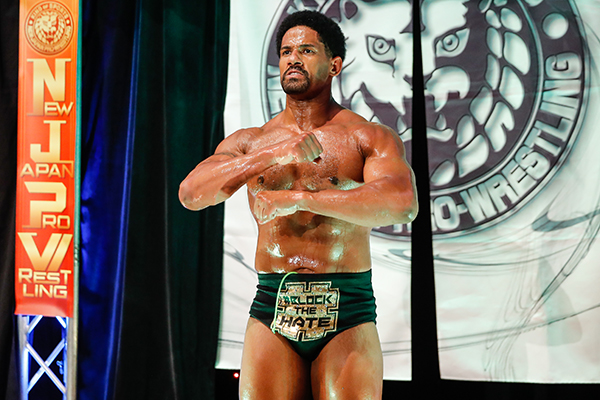 –You’ve become a real face of NJPW STRONG, and the fans will certainly be behind you in August. Were you a little nervous about how the hardcore NJPW fans would react to you when you came in from WWE?

Rosser: It is a little intimidating, because, I know I call myself Mr. No Days Off, but that name can be applied to everyone over there on NJPW STRONG. Every single person on that show works hard and puts in the hours and the effort. It’s the hardest working roster on the planet.  But I can keep up with these guys because I go in there prepared.

–You put in a lot of work before you even got into the ring on STRONG.

Rosser: One of my favourite actors is Matthew McConaughey. He says he overprepares for every role so that when he gets on set he’s able to improvise and do what he can do with a role, because he’s in control of the situation. So I tried to bring that into my work, make sure I was in absolute perfect shape beforehand so I was in control of the situation when I got in the ring.

–Of course, you got into the ring right in the middle of a pandemic. Did that make the preparation tougher?

Rosser: The moment the gyms closed, I went out and got TRX suspension training, resistance bands, all the equipment I needed. It isn’t about getting ready, it’s about staying ready, and then not missing a beat when you get in there. I’m never going to say I’m the best at anything, but I put every single ounce of effort I have in achieving my dreams. That’s what it’s about. I think the fans recognized that, and I’m grateful for it.

–Have you had many opportunities to train with Katsuyori Shibata or in the LA Dojo at all?

Rosser: Many times, yes. It’s not easy! Those Young Lions do it every day, while I’m invited every once in a while. But when I do get invited I make sure to show up and put in the work. It’s no joke and top notch. If it was easy, there’d be 40, 50, 60 guys, but it isn’t. These are the best of the best, fantastic athletes, and fantastic students. They’re listening all the time to some of the best minds for this business, and I’ve been really happy to help Kevin Knight, Clark Connors and those other guys there.

–So you’ve passed some of your knowledge down, too.

Rosser: Oh yeah. I make no excuses- I’m going to get my stuff in when I’m in there with you! I’m going to beat you up in that ring, but I’ll also make sure your talent gets elevated, and you get pulled up with me.