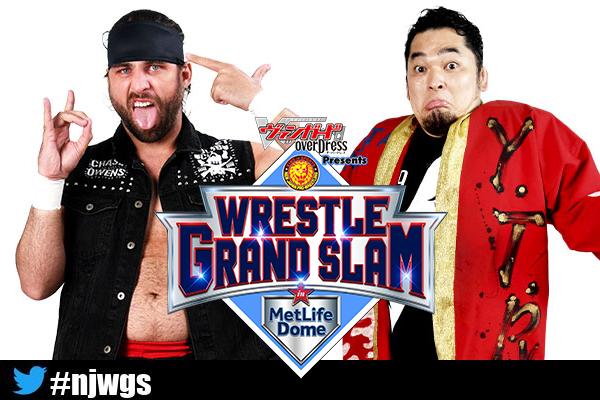 Owens was the first ever to relieve Yano of a KOPW trophy on July 25 in the Tokyo Dome when Owens persisted through a 22 man New Japan Ranbo, landing a Package Piledriver after a handful of powder to the eyes in order to claim victory. In the nights to follow, Owens would further pile on the humiliation, trying to get Yano to yell ‘I quit’ on a house mic. Angered, Yano demanded that the two have an ‘I Quit’ match at Wrestle Grand Slam in MetLife. Promising that Owens would ‘see how serious (Yano) can get’, Yano’s choice of rules has no pinfalls or disqualifications, and the only way to win is to make an opponent verbally quit on the microphone.

Owens would respond that he had his own rules in mind, and would announce his stipulation in Yokohama on August 10. Owens introduced his choice of rules in violent form, attacking Yano with a strap after their six man tag team match. the current holder has repeated his request from Castle Attack back in February- a Texas Strap Match.

Owens choice of a Texas Strap Match, where the winner must touch all four corners of the ring while strapped to his opponent, lost in the February poll to Yano’s choice of a YTR Style Strap Match. Now that he holds the KOPW 2021 trophy, will his choice of stipulation hold more sway? Either way we’re set for the most violent battle over the trophy yet on September 4!