–So, let’s continue our look back at 2009. On April 15 in Ryogoku, a high profile match indeed against Kurt Angle.

Tanahashi: Obviously I thought at the time it was an incredible honour to wrestle Angle for the IWGP Heavyweight title, but I think looking back, that feeling is all the stronger. A lot of stars had to align for that match to come together, and the company struck while the iron was hot.

–Obviously, Angle’s accomplishments, from the Olympics to WWE need no introduction.

Tanahashi: I’d seen him wrestle in WWE obviously, but I never really thought I’d get the chance to wrestle him. He was incredible, and I learned a lot even during that match.

–You’ve written in the past about the ‘unexpected bonus’ this match turned out to be to your career.

Tanahashi: NJPW was finally on the right path, but it was going to take some time for us to be where we needed to be. In that set of circumstances, to be able to wrestle Angle was so important to me, and something I was so happy to do.

–What particularly appealed about Angle to you?

Tanahashi: If you had to sum up Kurt Angle in one word it would be ‘professional’. He was tough as tough could be, but he had a comedic side to him. With a lot of great amateur athletes, they might have some difficulty putting that pride aside and succeeding in the pro ranks to the same level. But here Angle was, one of the best pure athletes there was, period, but he could still adapt perfectly without any sense of inflated ego. That’s damned cool. I think his match with Shawn Michaels is one of my personal all time favourites.

–Kurt has called you ‘the Japanese Shawn Michaels’.

Tanahashi: That definitely made me happy to hear, but I’d been patterning a lot of my matches on Shawn Michaels for years, so it did feel like I was being called out a bit, heheh.

–And how was the match itself?

Tanahashi: I definitely felt that unparalleled strength he had. I mean, here was a guy who could suplex around Giant Bernard and Brock Lesnar, and I definitely felt that power. But with me, slightly smaller than he was at the time perhaps, he still adapted himself perfectly. When I was in the States, I noticed they kept calling Angle a ‘machine’ and that was pretty apt. Precise in everything he did, and with inhuman stamina to boot.

–You really went to the fundamentals in this match, working a headlock quite a lot.

Tanahashi: Well, first I wanted to see what it was like to wrestle an Olympic medalist, so I tried to take his back in the opening. That clearly wasn’t going to work, so I felt I had to go old school Noge Dojo style. If you watch my matches from this point on, especially in bigger matches, you’ll see my really going for that headlock. The more I have control in the early stages, the more the rest of the match flow changes.

–You were really prepared for that Ankle Lock.

Tanahashi: I tend to pride myself on being good with counters and coming back from underneath. The Ankle Lock gives you a lot of options, with Dragon Screws and all sorts of other stuff. 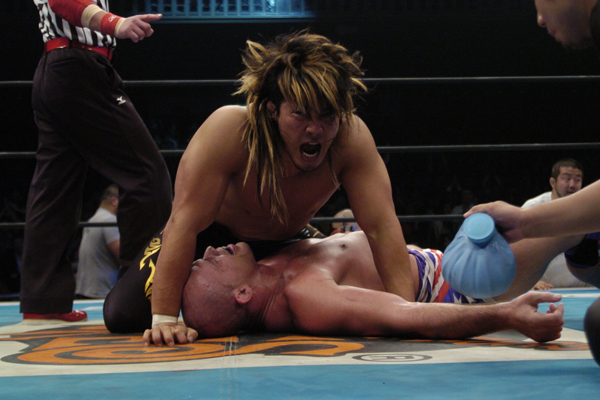 –You won with a pair of High Fly Flows.

Tanahashi: That was definitely gratifying, it felt like an achievement. I think from this point on is where we saw main events gradually get longer, and most title matches were in the 20 minute range, but this only went 15. It was the shortest title match of my career, but I think there was still a lot to it. I really do feel, even now, that a great match isn’t necessarily a long match, and I think this was definitely proof. In a lot of ways it changed my outlook on wrestling.

–It meant a lot to you. Kazuchika Okada has said he learned a lot from watching Angle while he was on excursion in TNA.

Tanahashi: You know that old Bruce Lee thing, being like water? I always say Angle is like air. just adapting itself and fitting the form of whatever the situation requires. Giant Bernard taught me that English phrase ‘playing by ear’, listening to the crowd and changing what you’re going to do to suit. Angle was the master of that. This match really was such an incredible experience.

–You were pretty overwhelmed in your post match interview.

Tanahashi: I mean, that’s how good the match felt in the moment. It really hit me that next to Angle, I was a Young Lion.

–That’s quite the thing for the Ace to say! Angle is eight years older than you but in terms of your respective careers, you aren’t all that different.

Tanahashi: But Angle was really thrust into the limelight right from his debut on huge stages. I think that’s what showed, more than I thought it would. Big match experience matters huge; that’s why I think my Tokyo Dome main events are so important to me as a wrestler.

–This was the only singles match the two of you ever had. Have you met one another outside the ring since?

Tanahashi: We really haven’t, and I think that’s why this match was such an important moment in time. Nakamura and Nagata have both wrestled him too, and I think there’s a very real, very noticeable, and very important distinction between guys that have wrestled Kurt Angle and guys that haven’t. I hope I have that kind of significance to other wrestlers. There’s no doubt he taught me how to be a top guy.