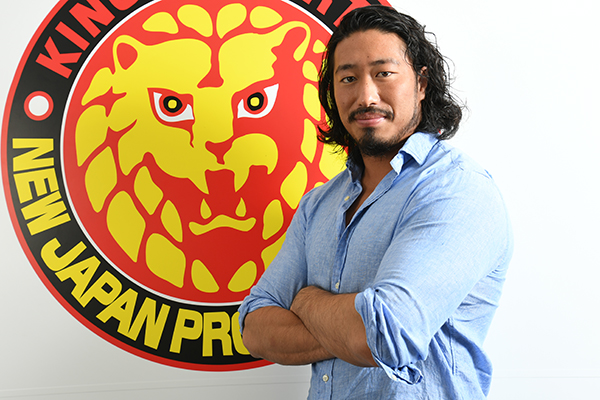 After a long journey as a Young Lion, Yota Tsuji is finally making his way in the world as his own man on excursion. As we await a bright future for ‘big Tsuj’, we spoke to the now graduated Tsuji on the brink of a new chapter. 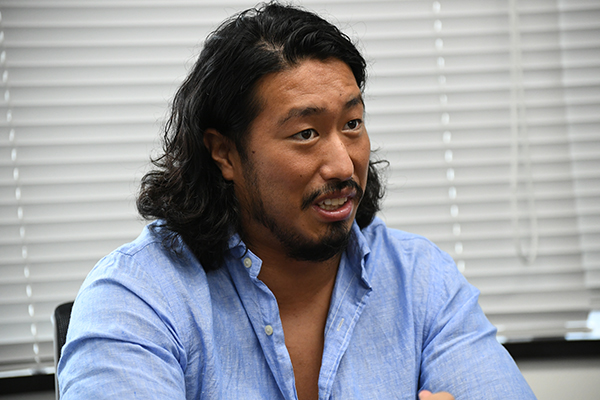 –So how do you feel, now that you’re officially no longer a Young Lion?

Tsuji: Before I had that last match, I kept thinking I’ve been a Young Lion for far too long. Now that it’s behind me, I realise it’s gone by in a flash.

–Any reflections on the last four years as a Young Lion?

Tsuji: It’s a cliche I know, but I came in not knowing a wrist lock from a wrist watch. All my senpai were yelling at me every day, the bumps were tearing me apart physically. Then I started working as Tanahashi-san’s attendant, we had the flood at the Dojo, COVID, a ton of obstacles. But in the end, I had 11 singles matches with the best of the best, and that was an incredible learning experience. Now, I know overseas things are very different from Japan, so I want to make the best of my time.

–You brought up Tanahashi. Your thoughts of your time working with and for him?

Tsuji: It’s no exaggeration to say that Tanahashi is the reason I am where I am today. I never once thought I would be working as Hiroshi Tanahashi’s attendant.

–How did you come to be his attendant in the first place?

Tsuji: Well, (Tomoyuki) Oka was his attendant before, and he said to me ‘if I’m not here anymore, you should take my place’. So that’s how that happened.

–Did you get any advice from Tanahashi about your excursion?

Tsuji: Yeah. I came to him, because I really wasn’t sure what it is I should be doing, or how to approach wrestling overseas. He said ‘this is your excursion, so you really should be trying to do everything you want’.

Tsuji: So that means my own costumes, my own moves, my own character. He told me to do everything I want, and then take the best of what I pick up with me back to Japan.

–Tanahashi sent a message to you in his comments after you two wrestled on June 14 in Korakuen. He told you to go on and ‘become a big star- until you come back as a top guy, I’ll be here waiting’.

Tsuji: I think it’s a bit much to interpret that as him entrusting the future to me, and I’m sure some of those comments were directed toward Yuya Uemura as well. But I think he was saying that he trusted me, or us, with the future of New Japan, and that was great to hear.

–You took those words to heart.

Tsuji: Absolutely! Then, after the Tokyo Dome main event, Tanahashi said that ‘until Tsuji comes back, I’m here, so there are no worries’, and that was incredible.

I felt for myself how great the top guys are 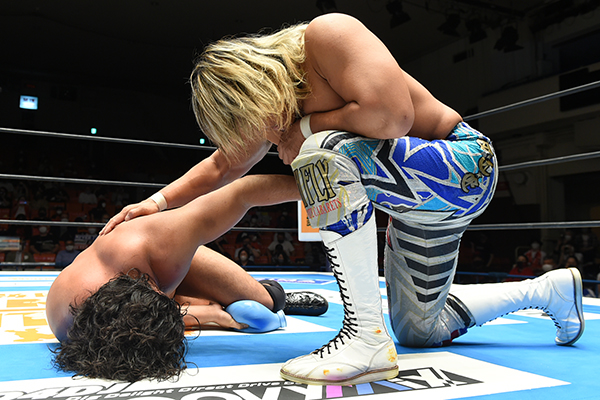 –So with Tanahashi’s words taken to heart, what exactly is it that you want to learn and achieve overseas?

Tsuji: I want to improve my English for a start (laughs). That’s a half joke, but from a wrestling perspective, I want to try and use all these moves that I’ve had in my head this whole time. Like Tanahashi said, I really want to try out a lot of new stuff and take what works back with me. And I want to get results in the process.

–So you want to put some achievements under your belt before you return.

Tsuji: For sure. I really don’t want to come back until I’ve won a championship overseas. If I can’t win a title there there’s no reason to believe I can win a title here. Overseas you might have big companies in AEW or WWE, but the best competition is in NJPW, and it’s by far the hardest to win a championship in New Japan.

–What kind of wrestler do you want to become overseas?

–You mentioned the singles matches you had against your peers; how was that experience for you overall?

Tsuji: Every one was very important to me but it was Tanahashi that was the most important. From him suggesting that I should get into the business in the first place, to working as his assistant, I owe so much to him and I was so grateful for the chance to wrestle him. 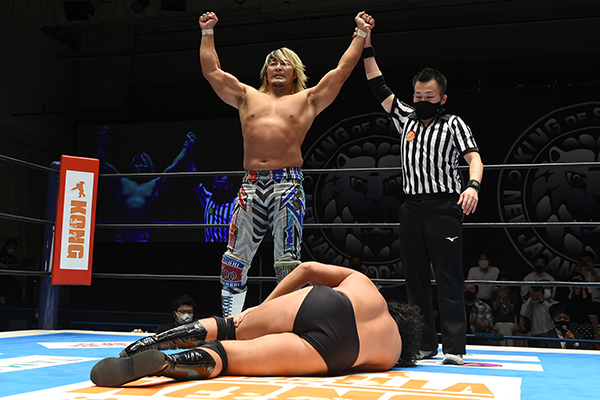 –What did you learn from that match?

Tsuji: It’s hard to really express it, but as I wrestled him I was thinking how incredible he is. For me, three years deep to get in there, with him, I really felt that difference ‘oh, this is what a top wrestler is like’. I was able to feel first hand how great the top of the top guys are.

–What other matches stood out to you?

Tsuji: Takagi and Okada, definitely. They were different matches. Tanahashi let me do what I was able to for a while, I think before he shut me down, but with those two guys they showed me exactly the difference in level we are at.

–Not many Young Lions get the chance to go one on one with the IWGP World Heavyweight Champion.

Tsuji: He was awesome. Power, speed, stamina, all leagues above me. I thought before the match that I could at least make him sweat a little, but no way. 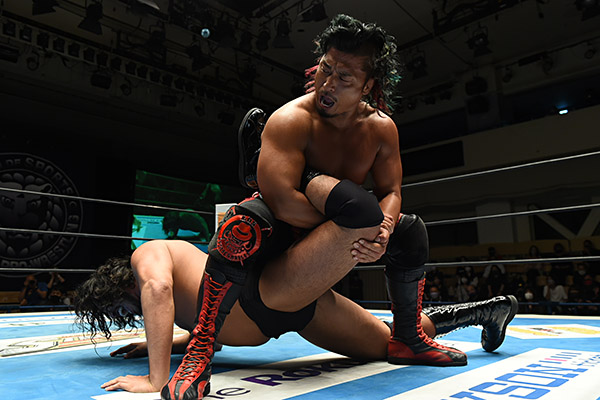 –Okada shut you down pretty effectively.

Tsuji: Man, even the look in his eyes was ice cold.

Tsuji: Again, I’m not sure how to really express this, but I really felt he was looking down at me. Like, ‘why did you put this piece of garbage in with me?’ It was gutting, really. 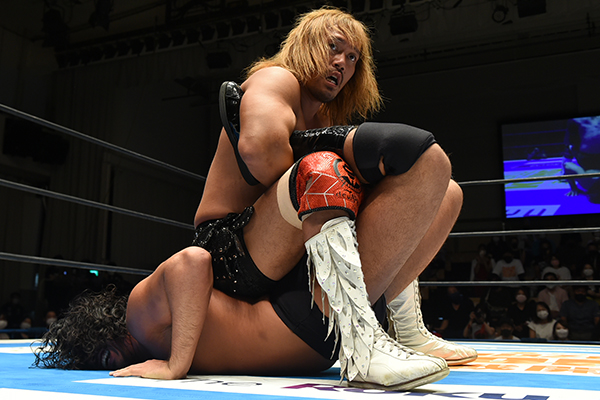 –Your graduation match was a long awaited one for you against Tetsuya Naito.

Tsuji: I’ve got to be honest, I wasn’t completely happy. I had issued that challenge over Twitter, and didn’t achieve what I set out to do, but the match still got made anyway. Naito himself said that the company was being a bit too soft, and I’ve got to admit, that did nag at me.

–That you didn’t make that opportunity happen by your own power.

Tsuji: Right. I mean, since I got that opportunity I felt I had to make the most of it. But when I come back, I think I’ll have another chance… I want to do that whole 55,000 likes idea again, heheh.

–What did you learn from wrestling him?

Tsuji: A lot about how to build a match and how to dictate the pace, for sure. He had the pace from the get go, so even though I was able to get a lot of offense off, it was still very much his match, and he was never in any danger.

–After the match, Naito sent a maessage to you in Spanish- hasta luego, adios! How did you take that message?

Tsuji: Really, the big thought in my mind is that next time it won’t be so easy for him.

–Naito referred to you wanting him to have to use Destino, and that next time you met he hoped he would be pressured into using it.

Tsuji: Yeah, that hurt to hear. I was taking that match serious as a heart attack, and he wasn’t taking me seriously at all. He didn’t have any need to use his strongest moves, and he made that perfectly clear.

–So you definitely want that ’55k rematch’

Tsuji: Right. By the time I come back, I want to be the kind of wrestler that gets those 55,000 likes easy.

We will carry NJPW into the next era, and in front of jam packed yelling crowds 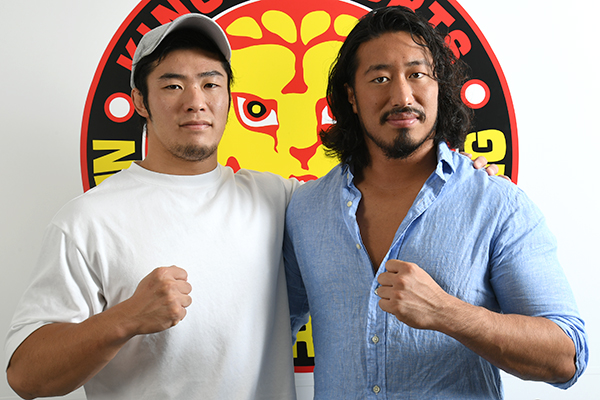 –A lot of your senior wrestlers were sending you and Uemura both messages in their backstage comments in the last few weeks. How did that make you feel?

Tsuji: It was heart warming, definitely. I think after Uemura and I, there hasn’t really been much in the way of newcomers coming up in the last three years or so, so that meant that there were more eyes on us. I definitely want to repay that encouragement with results while I’m away.

–Of course, Yuya Uemura is also going on excursion at the same time. What are your thoughts on Uemura?

–Destined to be together (laughs).

Tsuji: But seriously, we’re both very different people and different characters, but we’ve been able to have one another’s backs and help each other through this whole process. I’m really glad he was there with me this whole time.

–Obviously it was natural that the two of you would be compared and contrasted from the start, but was that a little bit frustrating, perhaps?

Tsuji: Well, sometimes there would be a bit of jealousy creeping in. Two years ago, when he got that shot in Super Jr. Tag League, I was definitely jealous.

–And as a result, you were part of the New Japan Cup for the last two years.

Tsuji: That first round match with Togi Makabe was definitely a big deal. To have an opponent that stature, and then to go at it head to head with him… It really felt as if I’d gained something significant with that match. 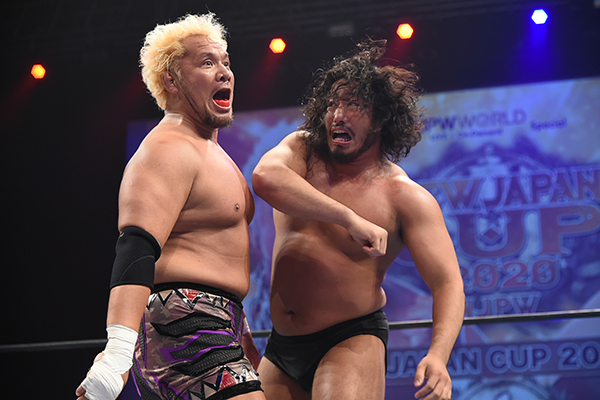 Tsuji: After that, during the G1 Climax tour, it was me, Uemura and Gabe (Kidd) in all those singles matches. We all wrestled one another so many times day in, day out, but I was still able to find something new, and learn something with each match. That was a really beneficial experience.

–It’s much too early to talk about what you’ll be doing when you return, but do you have a vision of what you and Uemura want to bring to NJPW when you come back?

Tsuji: I said this backstage, but me and Uemura will carry NJPW forward. We’ve had a tough time with COVID, but I want us to carry the company into a new era in front of jam packed and screaming crowds.

–Do you have any final message for the fans?

Tsuji: Can I say one thing first?

Tsuji: The Young Lion tradition in NJPW is a deep one, but I always wanted to change the Young Lion image. There’s this strong idea of shaving the head and stripping all that personality back, but I think it’s important for the Young Lions to have a little character. That’s why I grew my hair out and kept the beard. 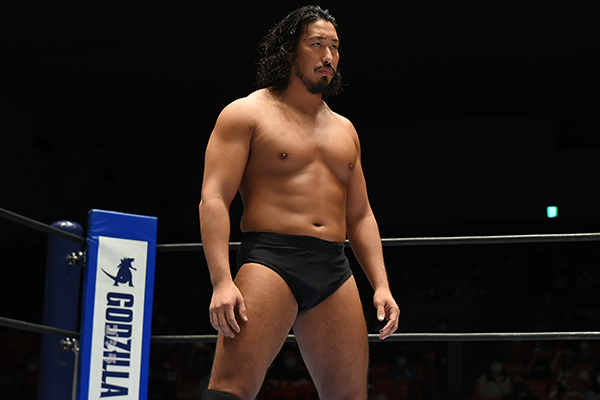 Tsuji: I know Young Lions are supposed to run to the ring and slide in. I’d be criticised and yelled at for walking out every so often, but I do like to think I might have changed the image surrounding Young Lions a little bit.

–You certainly were different to Young Lions we’ve seen before.

Tsuji: I was a little rebellious, but I think that gave me some extra support from fans, and I’m grateful for that. I don’t have any official merch, but fans would make their own signs to bring to matches, or send me some incredible support on social media, and I’m so grateful. I promise that I’ll live up to all your expectations… no matter what kind of wrestler I return as (laughs).

–Do you have a specific goal in mind?

Tsuji: I want to beat Hiroshi Tanahashi and become IWGP World Heavyweight Champion. And I want a Netflix documentary made about me! So make no mistake, I plan to come back as a big name! 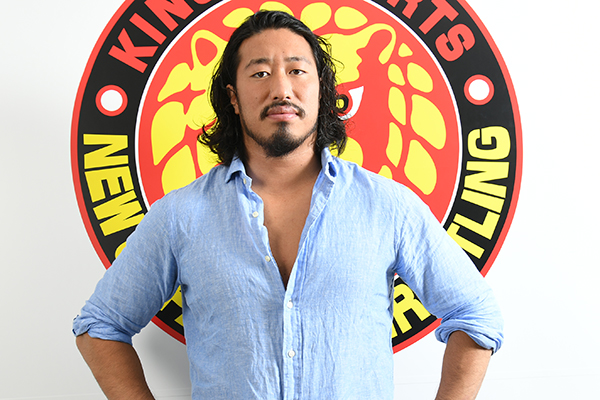