Shingo Takagi on picking up where he left off with EVIL, and the MetLife main event 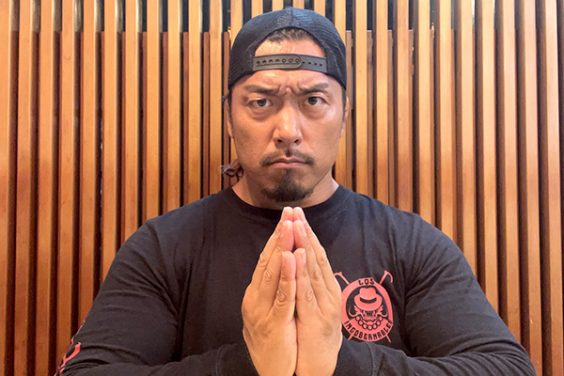 Shingo Takagi was an angry man in mid August. After interference, post match attacks and a broken championship side plate courtesy of EVIL, the Dragon was more than ready to unleash his brand of vengeance. Yet suddenly, and with just weeks to go before his IWGP World Heavyweight Championship defence in MetLife Dome on September 5, COVID-19 sidelined him. Now Takagi is driven to show that he is the best in the world Sunday. 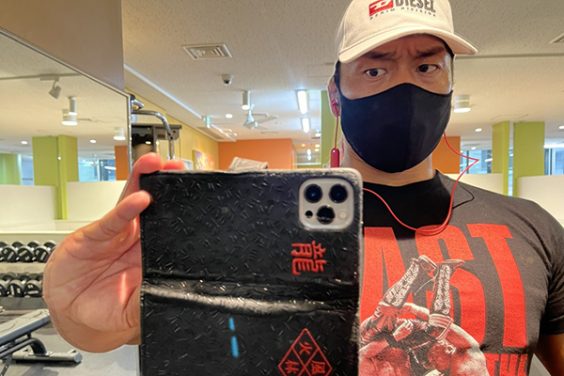 –You’ve been out of action since August 15, where before an event in Shizuoka, you presented with a fever, and then returned a positive PCR test. Now you have the go ahead to compete, how are you feeling?

Shingo: Perfectly fine. Completely healthy, but itching to get in that ring.

–You’d blogged that you had a couple of days where your fever went up, but you were able to get by and heal up naturally without any medication.

Shingo: I had the positive result on August 17, which was the Tuesday, and then by the Saturday I was able to exercise. I just woke up that morning feeling ok, and started pushups and doing steps on a stepladder I have at home. Just light exercise.

–You were quick to assert that you would be able to have this title match with EVIL in MetLife Dome. Fans were worried, of course, but in your mind, you never saw this as a prolonged absence.

Shingo: I absolutely never once thought I would be missing that match. It was a big shock at first to have a 38 degree fever, but at that point my body was already fighting the thing, and as soon as that was over, it was all good.

–It helped a lot that you’re always in phenomenal shape.

Shingo: But obviously forcing myself back would have been a waste, so it was important to start slow and work my way up. I had to beat the illness first, and then get back in fighting shape.

–Did you lose weight from the time off?

Shingo: About 4kg. I’d lost my sense of taste and smell and that wrecked my appetite for a bit. But now I’m right back to where I was.

–After NJPW announced that you were out of action, you stayed quiet on social media.

Shingo: Well, while I was off, there were still events happening. It wasn’t my place to blab about matches that weren’t my business. But I was watching on NJPW World. 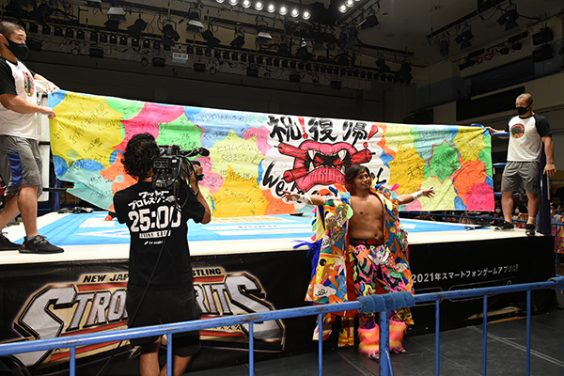 –With BUSHI also being off, and LIJ as a whole not being able to compete, Hiromu Takahashi returned in a singles match on August 27 with DOUKI.

Shingo: He comes back, and the rest of us are off- the LIJ drama continues, heheh. But that match was a real inspiration.

Shingo: I was in a tag match with him when he got hurt. I was wondering then what kind of match he would be capable of half a year down the line, and he was incredible. It definitely lit a fire under my ass.

–With Naito and SANADA in the tag picture, September 5 will be all about LIJ.

Shingo: Right, we’ll all be together and kicking ass. 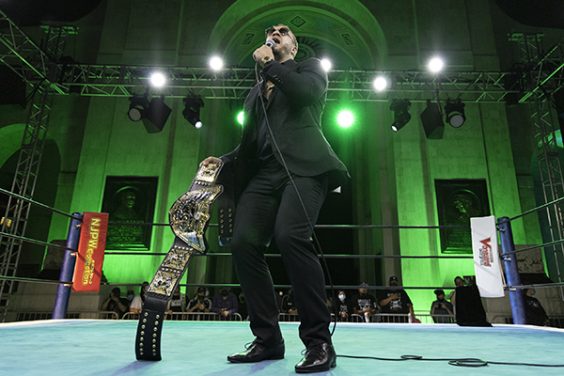 –You are coming back having to defend the IWGP World Heavyweight Championship in the main event right off the bat. Is there any extra pressure on you?

Shingo: Well, there might be fans, or staff that are concerned, but to me, having a title match right from the get go is exciting.

–There was more than a little concern, that after the Tokyo Dome main event had to be altered with Kota Ibushi’s illness, that this main event would be affected as well.

Shingo: Well, I couldn’t do anything about the Tokyo Dome. What I can do is show and tell everyone that I kept waiting that I’m back and at my best.

–You’re certainly carrying the responsibility of being champion.

Shingo: Right, and it’s also about getting all those people out my twitter mentions that say the championship is cursed.

–Will Ospreay vacated the title due to injury after his match with you on May 4, Ibushi missed his title match with you, and then you got COVID.

Shingo: I mean I don’t think you can chalk up something that’s spreading the way it is to a curse. And I was absolutely sure I’d be back in time for this title match. Even the doctor was amazed with how stubborn I was, and how I basically brute forced the damn thing (laughs).

–You dealt with COVID the way you do your opponents then. Well, the build between you and EVIL has been on ice since Nagano on August 14; what are your thoughts on him as an opponent?

Shingo: I have to say, it’s been annoying to have everything come to a halt. It’s been hard to put things on hold and now pick up again. But then I watched that US show (Resurgence) and saw Ospreay come out with that phony title saying he was the real champion. That got me mad at both of them all over again. Ospreay and EVIL.

–How was EVIL connected?

Shingo: Thanks to that p***k EVIL, my belt is damaged in two different places. Now Ospreay is showing up on TV with a shiny championship belt. It stands to reason that people who don’t know might think he was the real deal. I started thinking ‘man, this is all EVIL’s fault!’ and it got me fired up again. 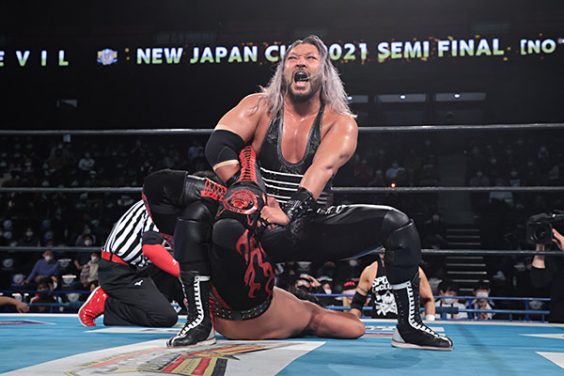 –Let’s talk about EVIL specifically. You faced off in the New Japan Cup semifinal, and were victorious, although Dick Togo was heavily involved. There’s a good chance this won’t be a fair fight.

Shingo: Well, after EVIL left LIJ, he completely changed his approach, and it’s been shortcuts all the way ever since. Him and Togo are so in sync it’s like they’re an old married couple finishing one another’s sentences at this point. Between his work at drawing the referee, and EVIL’s ability to take advantage, together with his natural ability? He’s a tough opponent for sure.

–You have to be careful on Sunday.

Shingo: I don’t have any respect for it, but you have to remember they’ll do anything it takes to get the win, and you have to prepare appropriately.

–He was your teammate at one point, obviously.

Shingo: Well, I tend to think I was the real reason he left LIJ in the first place.

–Certainly Naito wasn’t as impressed with EVIL’s output after you hadjoined LIJ.

Shingo: I don’t know whether he disliked me particularly, but he and I had a similar style, and weren’t all that different size wise. The biggest difference between us was I talk a million miles away and he said nothing at all. So I think the better I did, the more pressure it put on him.

–2020 kicked off with you being a double singles and six man NEVER Champion, while EVIL was a bit lost in the mix.

Shingo: So he leaves LIJ, finds a new style and it paid off for him results wise for a while, at least.

–He won the New Japan Cup in 2020, and won the double IWGP Heavyweight and Intercontinental Championships. Now he’s looking to reclaim the top spot against you.
Shingo: Well, I’m quite the thorn in his side.

It’s about beating COVID, beating EVIL and going into the G1 in the best possible shape 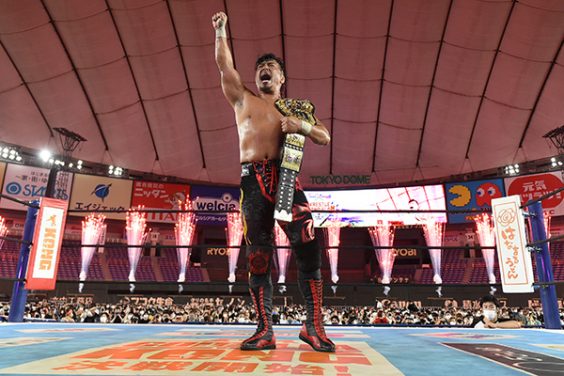 –Obviously there is unfinished business between you and Kota Ibushi. What do you think about Ibushi facing Hiroshi Tanahashi for the IWGP US title on September 4?

Shingo: It definitely caught my eye. Tanahashi took Ibushi’s place in the Tokyo Dome, I beat him and then he went on and won the US title. Then he challenges Ibushi?

–Tanahashi said he understood Ibushi was gunning for the IWGP World Heavyweight Championship, but that a ‘detour’ would be the best thing for him. Ibushi called Tanahashi not a detour but ‘the direct route’.

Shingo: You’d be wrong to think that this has nothing to do with me. I’ll be there on September 4. I want to see that match and take in the atmosphere in the MetLife Dome.

–These two cards will really set the scene for the autumn.

Shingo: I have a ton of unfinished business with Ibushi, and with Ospreay. But right now I’m 100% focused on EVIL. Last year, I lost the NEVER title right before the G1 Climax started, but this year I plan to go in as champion. 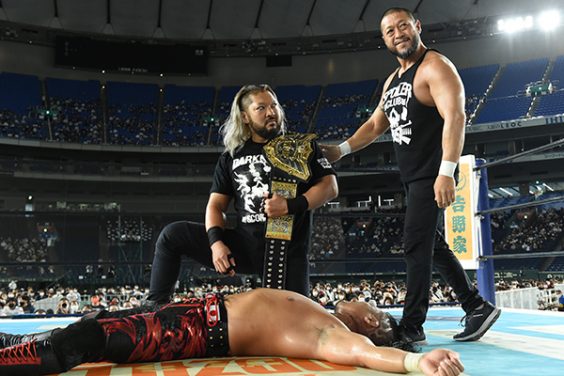 –You lost to Minoru Suzuki in Jingu right before G1 Climax 30.

Shingo: I think that affected my motivation in the early part of the tournament, and it meant I couldn’t get out the blocks like I wanted. This main event it’s about beating COVID, beating EVIL, and going into the g1 in the best possible state.

–What are your final thoughts for EVIL?

Shingo: It’s what I’ve said quite a bit by now. I really don’t get what it is EVIL is trying to do. I don’t get it. He keeps saying that crap about being in the right, being just, but there’s no depth to him, it’s all hot air. He’s had his share of success, but I have no idea what he’s really in all this for.

–Do you want to find that out?

Shingo: Even when he left, all he said was that LIJ was rotten. He never gave any more of a reason. Maybe his pride is stopping him from speaking up, from saying it’s because Shingo Takagi is far greater than EVIL could ever hope to be. Sunday, I want him to admit the truth, and if I can make him change his ways in the process, so much the better. 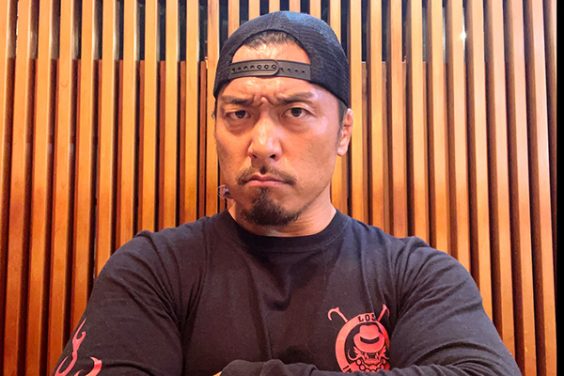