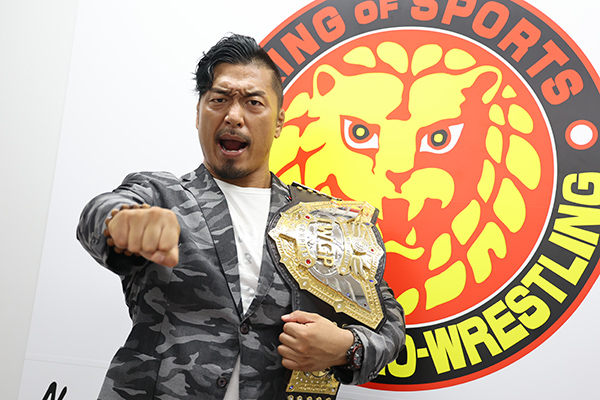 September 6 saw Shingo Takagi address fans and world media in the Wrestle Grand Slam press conference to address his successful defence against EVIL 24 hours prior. Takagi moved to V2 with the IWGP World Heavyweight Championship, and is preparing to enter his third G1 Climax as a champion for the first time. 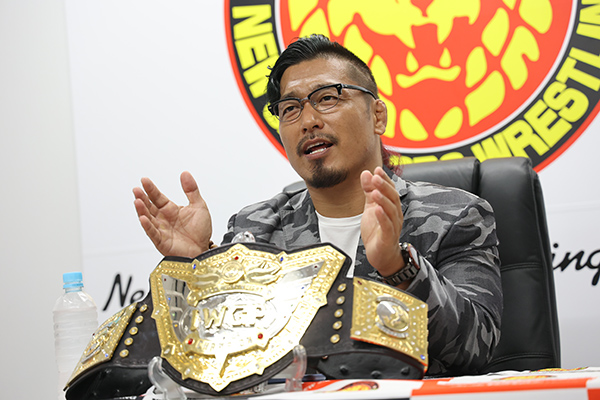 ‘Before we get started, yesterday was the first time I really yelled out in that ring in three weeks, so my throat is hoarse and my voice is pretty messed up. It might sound more like the legendary Dragon Genichiro Tenryu rather than this Dragon Shingo Takagi today, but let’s move on. I know people might be concerned for my wellbeing, but I’m fine today. Of course, I’m banged up from my match, but I feel good, and had enough get up and go to get up and go to the sauna this morning.

As for that damage, well, my neck and my back are sore, but that chair shot from SHO, I don’t know whether there was an extra little bit of hatred in that, but it hurt like hell. Still, I don’t have much time to reflect on that, the G1 is around the corner. I just still don’t really get what EVIL, and now SHO are going for. Even during the match… I guess they’ve formed their own team within the BULLET CLUB, what is it, House of Pancakes or something? House of..?’

‘House of Torture? I was close, but that’s a tough one to remember. Well, now you’re Out of the Picture as far as I’m concerned. I get rights to rename you now, right?

Anyway, I didn’t wrestle for three weeks, and dropped four kilos in ten days. That had me sweating for a while, and then I put five kilos back on. Man, I’ve been in combat sports since I started judo around sixth grade, 25 years plus, and I don’t think my bodies  been through anything like a fortnight span like I just had. It just goes to show what the human body is capable of dealing with even though I’m sure mine is complaining about it. It surprised even me, what a wrestler can do. Anyway, there’s two more weeks to go until the G1, so I’ll be working to be in absolutely perfect shape for the opening matches.’ 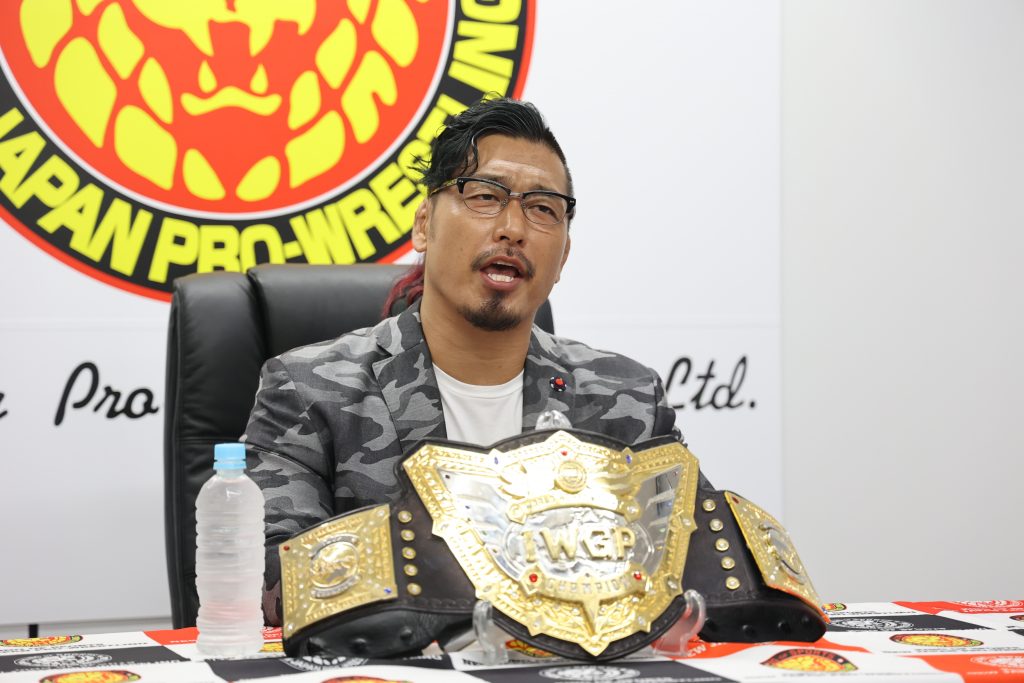 –The G1 lineup was announced yesterday, and you’ll be going into the tournament as the IWGP World Heavyweight Champion. Your thoughts?

Shingo: Last year I was NEVER Openweight Champion and was really driven to head into the G1 with the belt, but then I lost to Suzuki in Jingu Stadium. That messed with my motivation a little and it made the start tough for me. This time I’m World champ and going into this thing, so it’s a different picture. But then again, nobody has ever gone into this as champion and won, right?

Shingo: I definitely wouldn’t mind adding Shingo Takagi to that list. Maybe this is just the outsider in me talking, but I always had that image of the G1 winner going on and then challenging for the IWGP. I won the title first, but when you look at the past champions in this tournament, you’ve got Tanahashi, Okada, Naito, then Ibushi won it twice in a row. So I really think I need to win this tournament. Some of the press yesterday were talking about this big return for me yesterday. But to really solidify that I need to win the G1.

–You’re in A Block this year. Are there any particular opponents you’re excited to face?

Shingo: Well, it’ll be my first singles matches with Loa and O-Khan. I watched the announcement video yesterday with everyone though, and I couldn’t not be drawn to Naito and Ibushi.

–You’ll finally get that match scheduled for the Tokyo Dome, during the G1.

Shingo: He wrestled Tanahashi on Saturday, but to be honest, I wanted to be the one to get his return match. In the end I had to settle with being ringside on commentary. I think, and I don’t know whether this was intentional or not, we saw him trying to adjust expectations on social media and what have you before the match, but he brought it. I think he was damn close to beating Tanahashi. So I know full well he’ll be physically up to the task, and he’s won it twice in a row. I can’t let him get the hattrick. Right now our positions are very different, and I think that’s what I want to highlight in our match.

Then, Naito… We don’t have a leader in LIJ, but I’m the champ, so people might consider me as the leader, and then… I’m obviously grateful he came to help me yesterday, but I could tell he was giving me a bit of the stink eye while I was on the mic. I don’t know if there’s a bit of jealousy there, or what. But it isn’t about saying I’m definitively above him or anything like that; instead it’s about the fact I lost to him in the G1 two years ago, and there’s a debt that needs repaying. But the match I’m most excited for is with Zack.

Shingo: I have actually, about 12 years ago, 2008 or 2009 in Germany. It was in this tournament, and he was there, only 19 at the time. We all know him for coming at you with these submissions, but I tapped him out! I submitted Zack Sabre Jr., heh. I don’t know whether he remembers or not, but I’m excited to pick up again with him after 10 years plus apart.

–What are your thoughts on B Block? Who would you want to face in the finals?

Shingo: Well, I think my theme here in this G1 is that the floor is the finals for me. I absolutely want to make the finals at the very least. And obviously I want the best in that final. Plus I like me my fresh matchups and new situations, so SANADA would be a great one. Even out of all of LIJ, he has unique appeal. Tanahashi si the US Champion and still has a status above everyone, but SANADA. There’s a sleeping beast within that man I’d like to awaken. 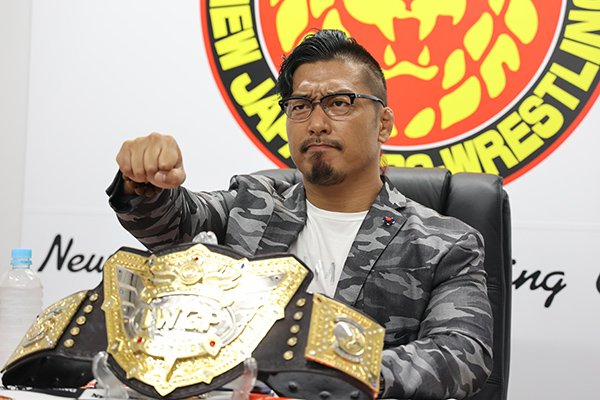 –Of course, Will Ospreay is not in this G1. You did lose to him earlier in the year. What are your thoughts on Ospreay?

Shingo: I know he came down with COVID recently, right? And he put out a video saying that he would be right back. Where was that kinda attitude four months ago, huh Ospreay? No ‘Shingo I’ll be right back’, nothing but complaints over the last four months instead, from what I’ve seen. If you had an issue you should have come to Japan. Hurt or not we could have talked this over, but you took four months away and now you can get in line, at the back.  I can’t deny that I haven’t beaten him. Not recently at least- people have forgotten by now that I beat him in the G1. But with that in mind, I have to prove that this title belt that I have is the real IWGP World Heavyweight Championship and his is a phony fake. That’s a mission of mine in this tournament, to prove to the fans that I am the real deal. Winning the G1 will do that and it’ll shut Ospreay up in the process.

–As we wrap up here, have you remembered the name of the new BULLET CLUB team?

Shingo: A test? Out of the Picture, right?

Shingo: I can’t get my head round it. Your parents should take you behind the house for a spanking, the way you idiots carry on. Hey, I’m just trying to bring about a little levity around here, it’s a tough crowd every time we do these.