–Last time we talked about how you lost the IWGP Heavyweight Championship to Manabu Nakanishi in Korakuen Hall, and won it back shortly afterward at Dominion ’09. That same night, Pro Wrestling NOAH’s Takashi Sugiura defeated Hirooki Goto and moved to challenge you after the main event.

Tanahashi: There was still some juice left over from the interpromotional matches at the Dome, and Sugiura had become the center of attention in all that.

–NJPW and NOAH were involved in interpromotional matches since the prior September, and there was a big spotlight on Sugiura teaming with Mitsuharu Misawa against Hirooki Goto and Shinsuke Nakamura at Wrestle Kingdom. Sugiura lost to Nakamura, but made a definite impact.

Tanahashi: That spun him into this feud with Goto. Goto was a bigger guy, but Sugiura was so densely packed with power, and he really carried that amateur tough guy reputation with him to the ring.

–So your first defence would be against Sugiura in Sapporo on July 20. This was actually the first time in history a NOAH wrestler challenged for the IWGP Heavyweight Championship. NJPW wrestlers had challenged for NOAH’s GHC title four times, but never won.

Tanahashi: That included me against Takeshi Rikio in the Dome in 2005. From the match itself, to the result, I had a lot of unhappy memories connected to that match. So this was a bit of a revenge situation for me. 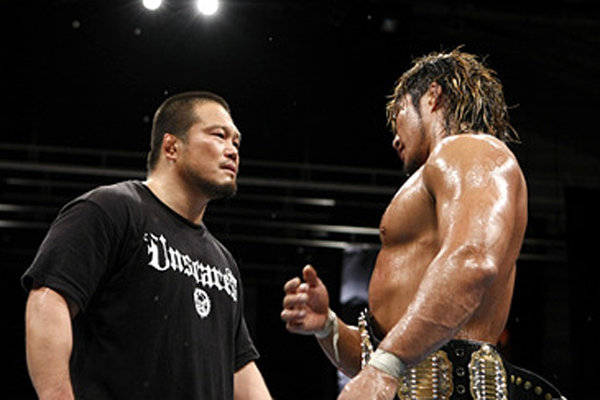 –May 5 in Korakuen there was a tag bout with you and Koji Kanemoto facing Takeshi Morishima and Kota Ibushi. You said afterward that you badly wanted to beat out NOAH.

Tanahashi: Yeah. Beating the opponent in front of me was only part of it; it was a lot about beating the promotion as a whole. There were a lot of bad memories of the mid 2000s where we were worked over by guys from other companies.

–There was the point of view among commenters and the press that NOAH had taken over as the business leader in Japan for a brief time.

Tanahashi: They were getting more coverage, more magazine covers, the whole deal. That really hurt, so this was as much about responsibility for the company as it was my own personal desire to win.

–Obviously it was around this point in time that Mitsuharu Misawa sadly passed away in the ring on June 13. What were your thoughts when you heard the news?

Tanahashi: I remember we were in Kyoto that day, and I first heard the news while I was out to dinner with guests. It was hard; I was keeping my composure in company, but incredibly concerned under the surface.

–For Misawa of all people to pass in the ring was such an immense shock.

Tanahashi: You had that image of him as a wrestler who could take any punishment imaginable. For him to go… It really was a reminder that we put our lives on the line every time we get in the ring.

–You faced Misawa just the once, in 2004. Misawa and Yoshinari Ogawa challenged yourself and Yuji Nagata for the GHC Tag titles.

Tanahashi: Nakamura only faced him once as well, that match in the Dome. For us to wrestle a guy that we had been watching since we were fans was really a huge deal for the both of us. Before I faced him that time, I think I said I wanted to find out what a Misawa elbow was like, and i wanted to get into a strike exchange. In the end, I sure felt what that elbow was like, but I wasn’t going to trade (laughs). 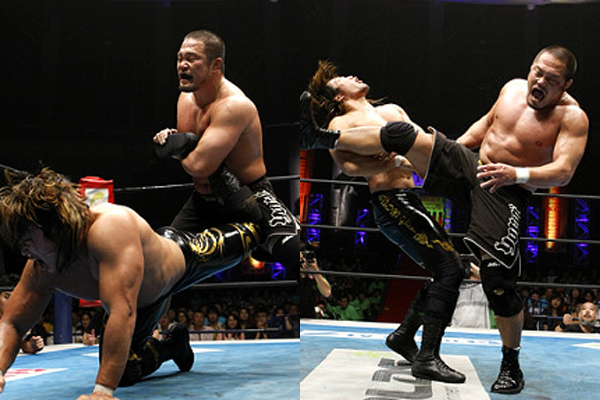 –What were your thoughts on Sugiura as a wrestler, in that title match? Those suplexes of his certainly carried a reputation.

Tanahashi: It was a little hard to know what to expect; we didn’t have any preview tags, it was just straight to the match itself. To double back on the Misawa talk, I had heard from everybody that Sugiura threw some stiff elbows, so I was ready for that going in, but when it came to actually taking them, that was a different matter, preparation be damned.

–There is the old wrestling adage that back in the day NJPW was about punishing, and AJPW was all about taking the punishment. Sugiura in theory represented that old All Japan mindset, but actually wrestled in a very New Japan way.

Tanahashi: Right, I think he would have fit very well in the New Japan roster back in the day. Not just with the elbows, but kicks and really every one of his strikes. 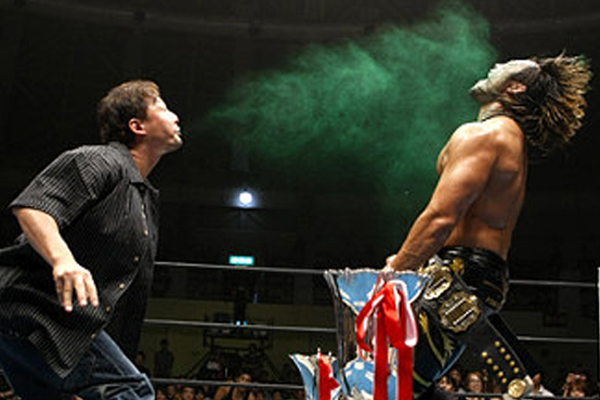 –You countered Sugiura’s Olympic Slam and landed a pair of High Fly Flows to win the match in the end. Then, just as you were sending the fans home, TAJIRI from HUSTLE ran in and hit you with the green mist.

Tanahashi: Right. I know there was a bit of a theme over the year with defending New Japan against invaders, but man, I didn’t get a second’s rest (laughs). But I think that series of events really established me as the central protagonist here in NJPW.

–Just before the match with Sugiura, you were attacked by Masato Tanaka of ZERO-1 as part of the Complete Players with Jado and Gedo as well. TAJIRI and Tanaka would both go on to be part of that year’s G1.

Tanahashi: Well, being beaten down in surprise attacks isn’t fun, but it reinforced that I am the focal point of New Japan- the best and quickest way to make an impact was to go after me. It was a big boost to my self esteem, being in that position of responsibility. 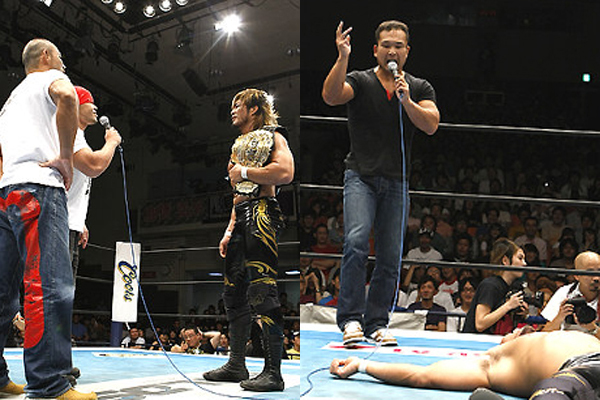