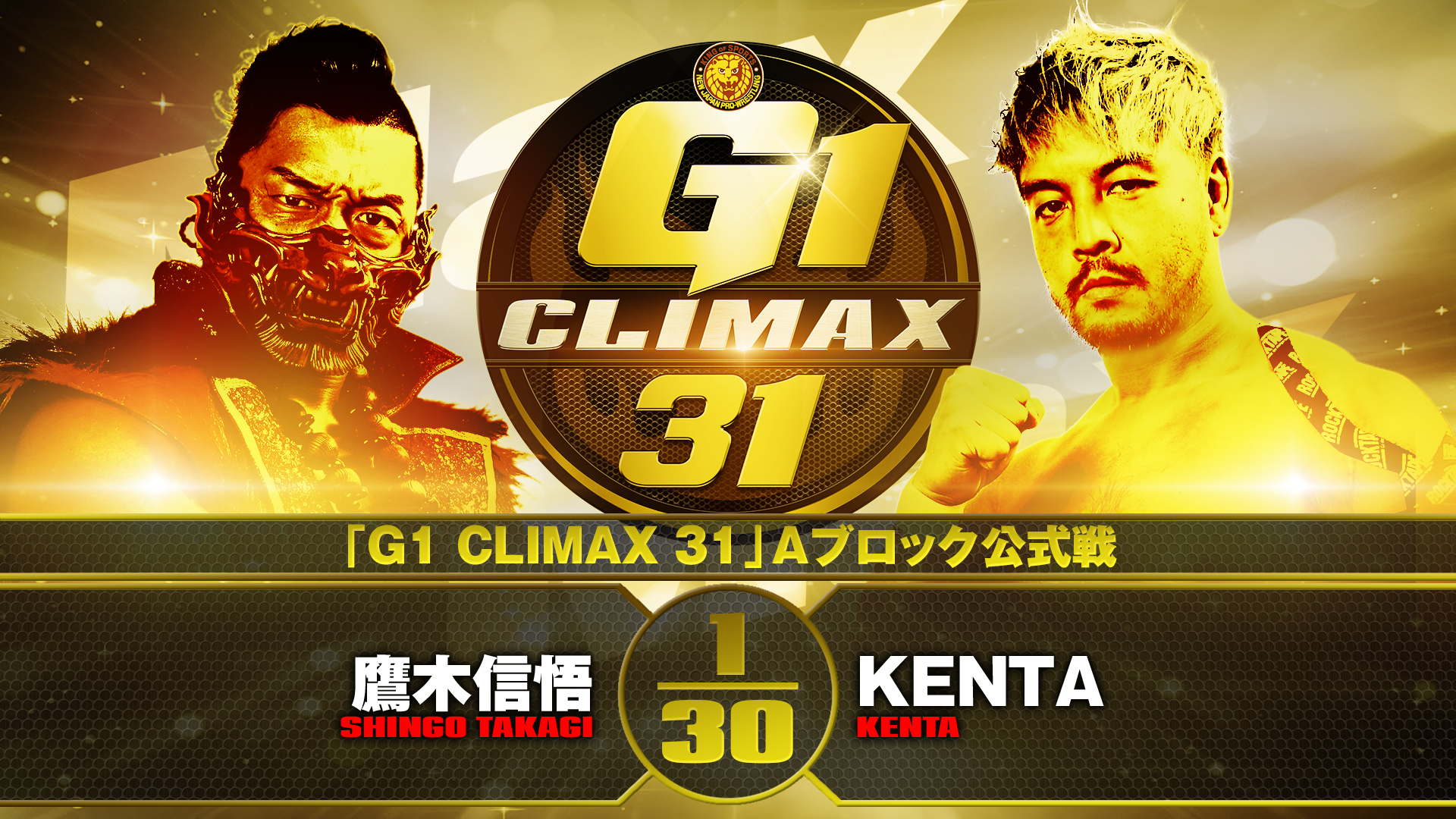 Pre-match talk around Shingo Takagi and KENTA’s match in the New Japan Cup this year was rather more humourous than the IWGP World Heavyweight Champion would have liked, the Dragon’s put downs toward the BULLET CLUB member being immediately rebuffed in comedic form. Shingo was eager for revenge after being knocked out and briefly hospitalised by a Go2Sleep many years earlier, but KENTA changing the script pre-match shifted the atmosphere around the bout. Nevertheless, the Dragon picked up the victory in Korakluen Hall that night, and badly wants to do the same on September 30.

With his scheduled match against Tetsuya Naito in Kobe cancelled, Shingo is eager to get back on the G1 horse, with bad memories of Zack Sabre Jr.’s submission victory in Ota last week still lingering. Takagi showed his motivation with a violent non tournament battle against Yuji Nagata in Kobe World Hall instead, and will try to shake off KENTA’s insults to bring the intensity in tonight’s main event. 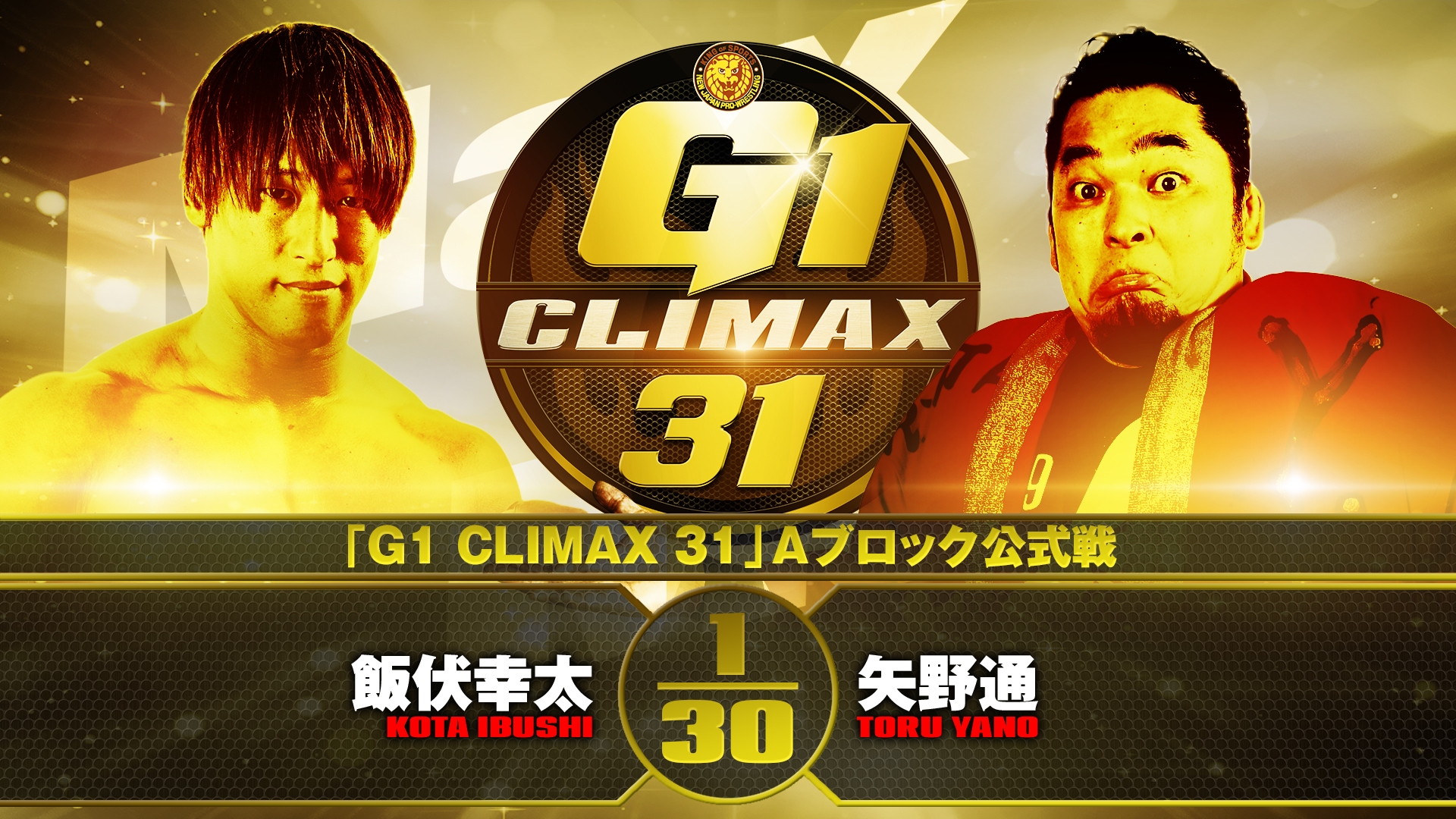 Don’t get up to make a sandwich before this one. Kota Ibushi and Toru Yano have met one another in four singles matches in their careers, with an average length of four minutes and 52 seconds, which includes Toru Yano’s personal best for fastest win in the 2015 G1 Climax, clinched in just 50 seconds. In fact, the 2-1 record for Yano against the two time G1 winner in this tournament is going to be nagging badly at Ibushi heading into a match that he can barely afford to lose, and that will could lead to an unforced error that Yano will gladly take advantage of.

At 2-2, Ibushi’s record looks more even than it actually is, one win coming from Tetsuya Naito’s forfeit, and the other a scrappy victory against Tomohiro Ishii. A third loss is not a death sentence, but will give him a ceiling of 12 points, which will likely place him on the bubble of contendership by the time we get to the Budokan in a couple of week’s time. Does Yano have his number tonight? 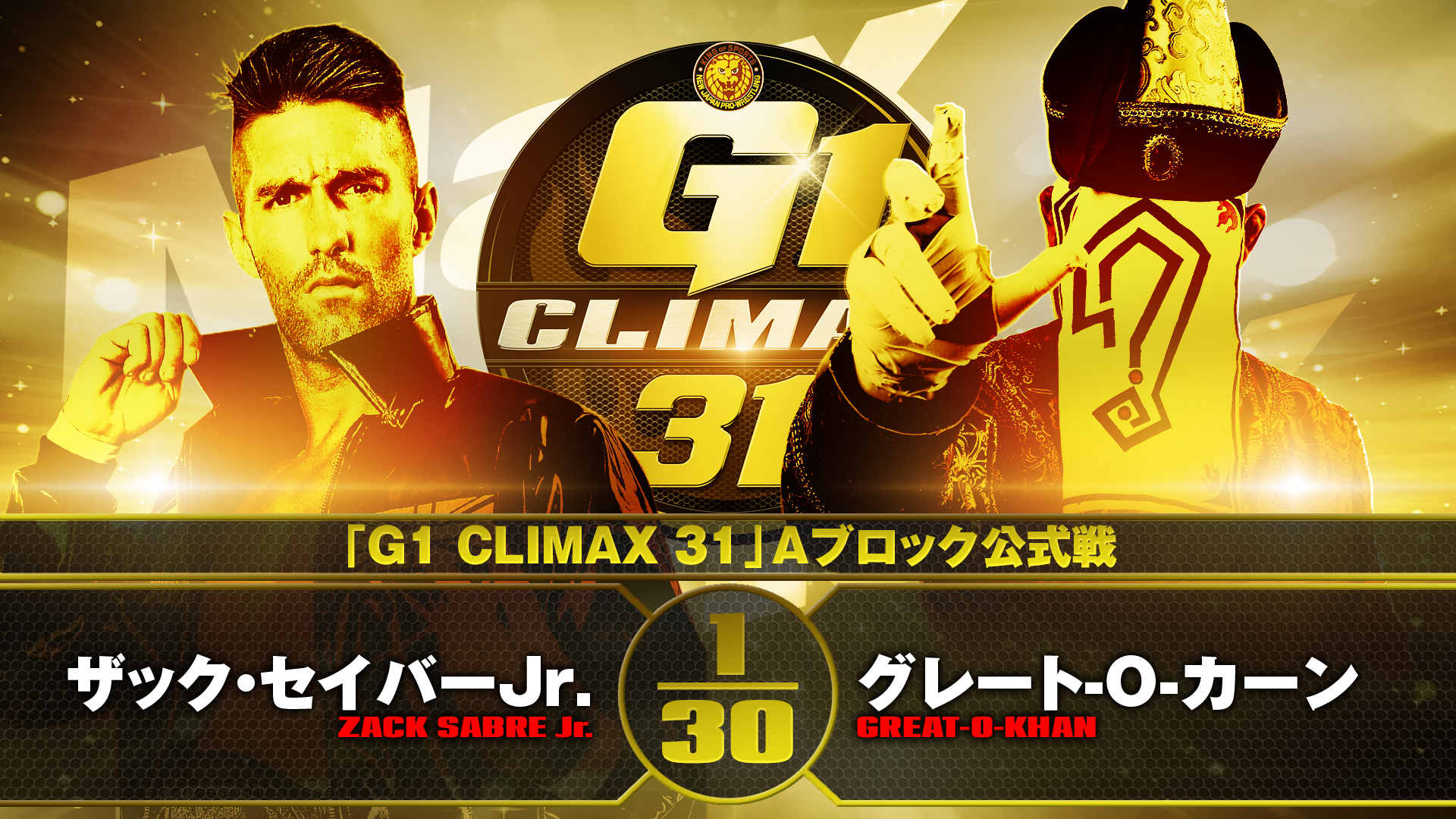 Assisten though it may be by Tetsuya Naito’s forfeited run, Great-O-Khan has put together an undefeated streak to get him to eight points in his debut G1, matching KENTA’s 2019 record, and coming within a match of Jon Moxley’s debut five match streak. O-Khan also has the knowledge that he is over the ‘Yano trap’ that Moxley fell into having beaten the master producer in his second bout, meaning the United Empire’s Dominator is in fine fettle heading into Korakuen this Thursday.

Yet O-Khan is facing another opponent on a hot streak, and perhaps the hottest in recent history. Zack Sabre Jr. has not only beaten, but submitted Tetsuya Naito, Shingo Takagi and Kota Ibushi in his first three matches, in a run of momentum that seems eerily similar to the four submission streak that took him to the New Japan Cup in 2018. ZSJ will be looking for another submission tonight, but his opponent may be the hardest to tap thus far in the tournament. A martial artistry polymath, there isn’t a fighting style Great-O-Khan is not proficient and extremely dangerous in. Contrasted to Sabre’s European Catch speciality, this is one of the most intriguing styles clashes in the entire G1, and one you cannot afford to take your eyes off of. 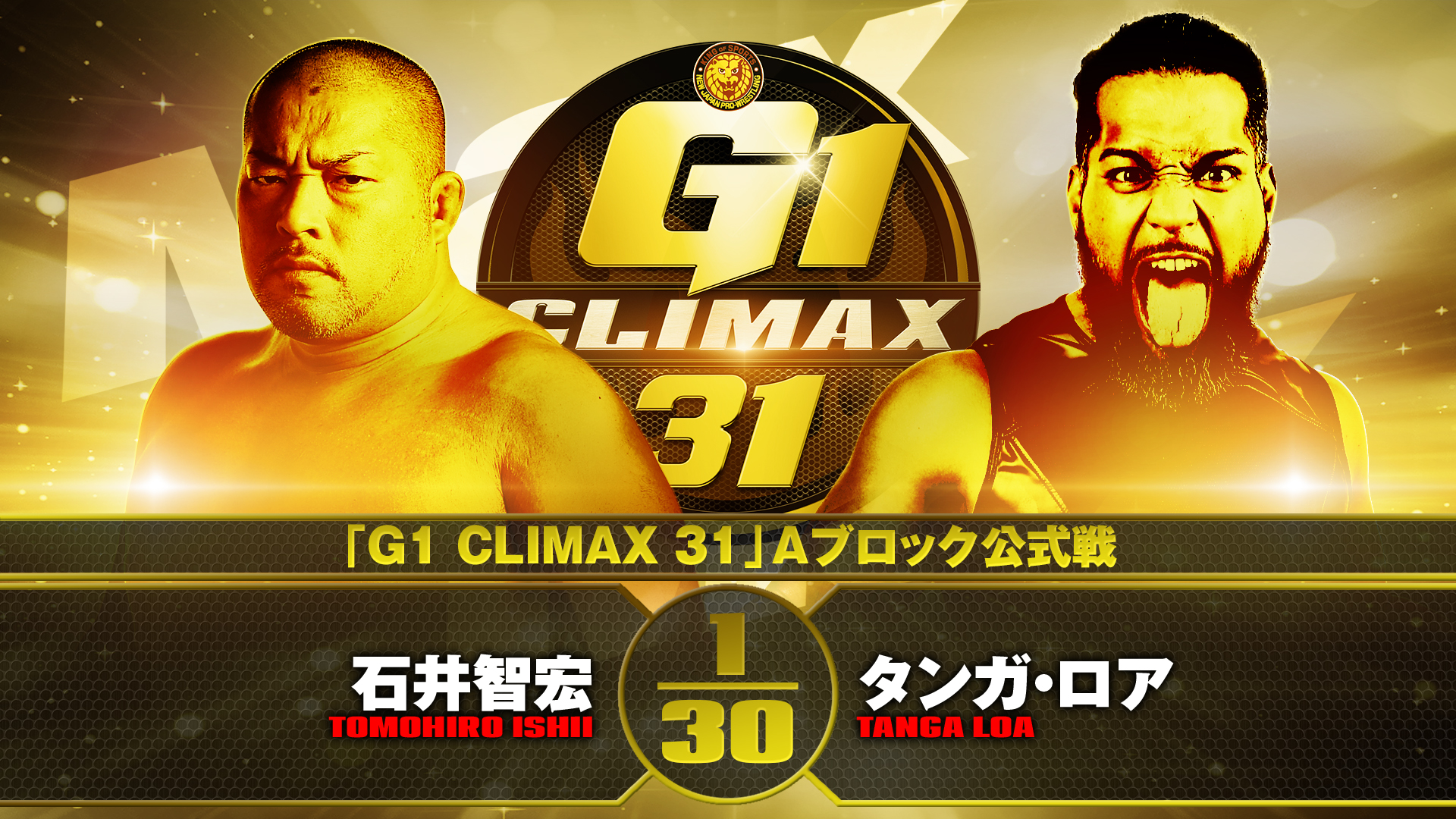 In a situation where another loss will make the finals a very distant possibility, Tanga Loa and Tomohiro Ishii will be looking for their first non forfeit victory in the G1 tonight. Ishii has had a difficult start to the tournament, placed in a murderer’s row against Shingo Takagi, Kota Ibushi and KENTA, each resulting in hard fought losses. Based on pure form, Tanga Loa is a much more winnable prospect, but the more the tournament has worn on, the hungrier Loa is becoming. Could he upset the Stone Pitbull tonight? 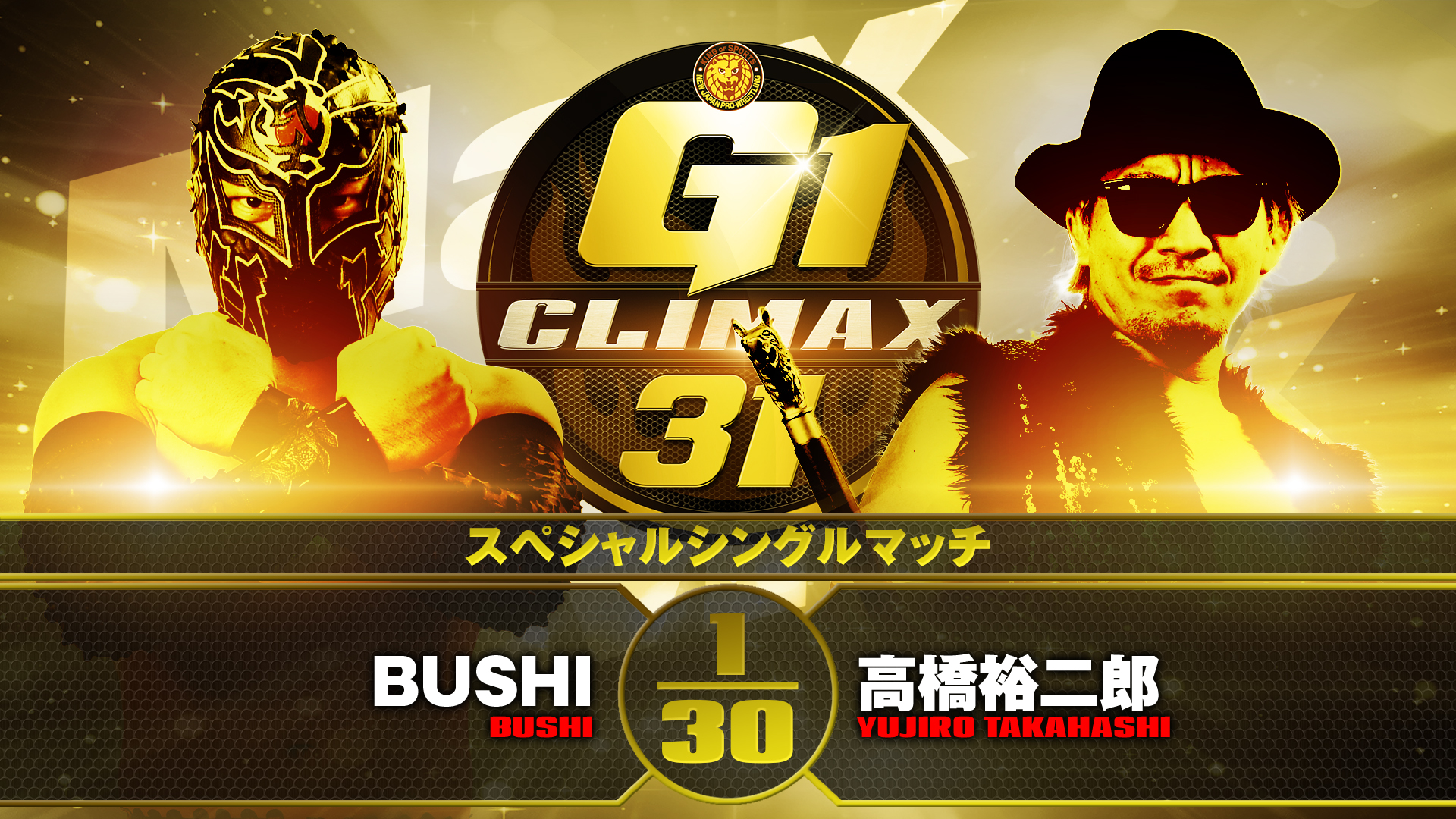 Kicking off the evening, Yujiro Takahashi will be going one on one with BUSHI. Yujiro may be denied his scheduled match with Tetsuya Naito, but will likely be very pleased that his former partner had to bow out to a knee injury, extending his history of knee issues that Takahashi has exacerbated in the past to violent effect. Yujiro doesn’t get to wriggle of the Los Ingobernables De Japon hook though, as BUSHI will be taking Naito’s place. There is no doubt that BUSHI will make Yujiro work for his two forfeited points in the opener tonight.