After a critical and competitive night in Yamagata, Zack Sabre Jr., Shingo Takagi, KENTA and Kota Ibushi topped the A Block table with 12 points and one more match left to come. 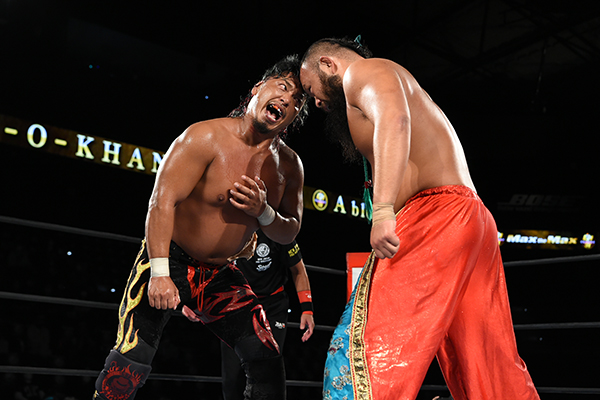 IWGP World Heavyweight Champion Shingo Takagi battled great-O-Khan in a main event he had to win in order to stay in the conversation next week in Yokohama. Having tried to out wrestle several of his opponents at their own games, O-Khan would present trouble for Shingo, his size meaning the Dragon was unable to easily overpower the Dominator, and would instead be tackled with a Takagi like shoulder charge. As the rattled Shingo was sent to the floor, he would be booted off the apron when trying to make his way back inside, and O-Khan would then drive the champion into the steel as he continued to hold the early advantage.

O-Khan’s hubris would bite him when he took a proud seat atop Shingo in the corner; an angered Takagi would land a stiff right blow and his own version of the Mongolian Chop before a DDT and brainbuster. As the Dragon went for a sliding lariat though, he would be caught into the Sheep Killer. The imperious O-Khan would grind Takagi’s face into his boot, but the proud World Heavyweight Champion would only fire back, leading to a heated exchange of stiff strikes and suplexes.

Takagi gathered steam and went for Noshigami, but was countered, a reverse bearhug and shots into the turnbuckle to taped ribs that were further damaged with a drop over the ropes. The Sheep Killer and a powerslam would get a near two as the champion struggled past the 20 minute mark but Takagi would counter with an arm bar, and then closed the distance on a pump kick to land Made In Japan. 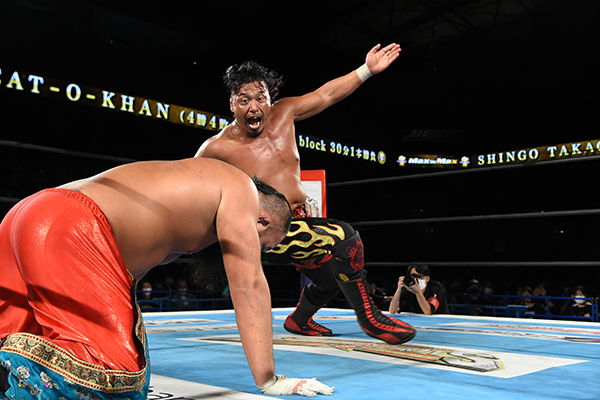 As both reset, hard strikes were exchanged, with Takagi coming out on top with a wild right forearm. O-Khan muscled out of the Last of the Dragon though, finding an Iron Claw and then a huge lariat for two, but still the Eliminator didn’t come for the United Empire member, countered with a snap Dragon suplex. Pumping Bomber did score for Takagi though, and then Last of the Dragon landed for the Takagi victory. 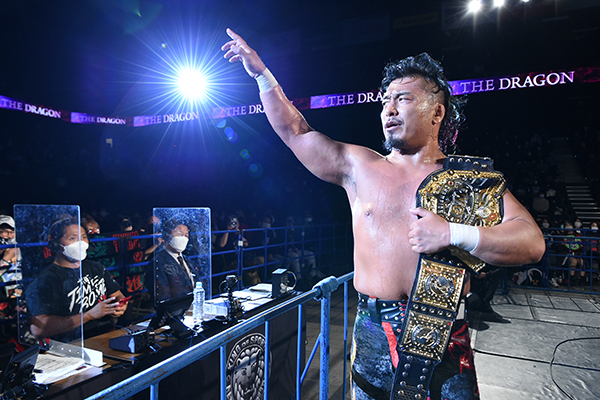 In a must win situation against Toru Yano, Zack Sabre Jr. set to work quickly with a choke and roll-up for two, Yano responding with N-U for a two of his own. Both combatants fought over a Cobra Twist before a ground Cobra almost got Sabre the win, Yano instead bailing to the floor as fans in Sendai took a breath. 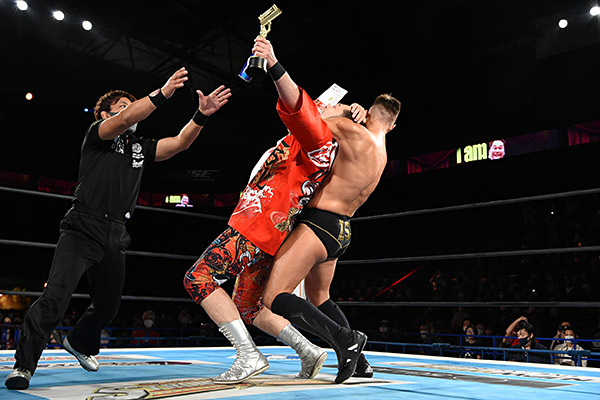 Sabre threw strikes at Yano, only to be thrown himself by Yano with a front suplex. The master producer would muscle the Briton to the back and then tried running to the ring for a countout win as a now blindfolded Sabre almost got caught out. As ZSJ continued to rally, Yano frantically ran through his playbook, digging out a pair of handcuffs for Sabre only to find himself handcuffed to his opponent. Both men now joined at the wrist, Sabre found a cross arm breaker to submit Yano. 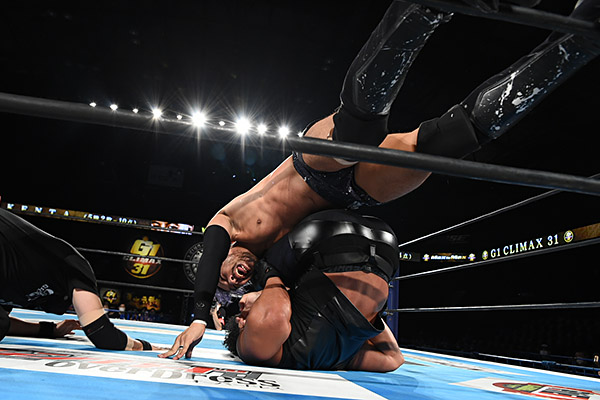 KENTA headed to the ring against his BULLET CLUB teammate Tanga Loa in a strong position, having already hit the ten point mark, one win off the leading pace. BULLET CLUB team orders were not in play though, as Loa showed his power at the jump, and stayed in early control. Thrown off, KENTA tried to avoid engaging, only for Jado to force him into heavy contact, including into the steel guardrails. 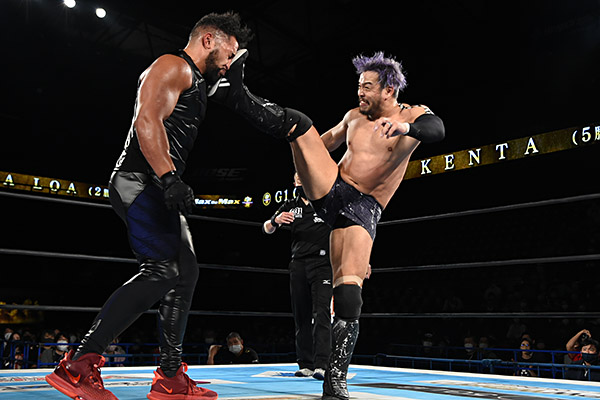 Loa would keep control of KENTA inside the ring, with the front runner unable to respond to a standing moonsault, and tortured in the OJK. When he escaped from a Loa suplex though, KENTA managed to find some space, landing a Tornado Gunstun and then a lariat from the top to get two. A powerslam followed, but Loa would be fired up by KENTA’s kicks, and responded with an enzuigiri and Blue Thunder Bomb for his own nearfall.

KENTA found a Green Killer to stall Loa and all but double stomped a hole through his foe’s chest for two. Loa would rally even in the face of KENTA’s overhand rights though, and a T-Bone suplex had the former NEVER champion reeling long enough for him to send Loa into the referee and deliver a low blow. Taking down Jado in similar fashion, KENTA moved to secure victory with his kendo stick, only for Loa to hit KENTA low instead. Loa would try for Apesh*t but would be rolled up with feet on the ropes for the KENTA victory. 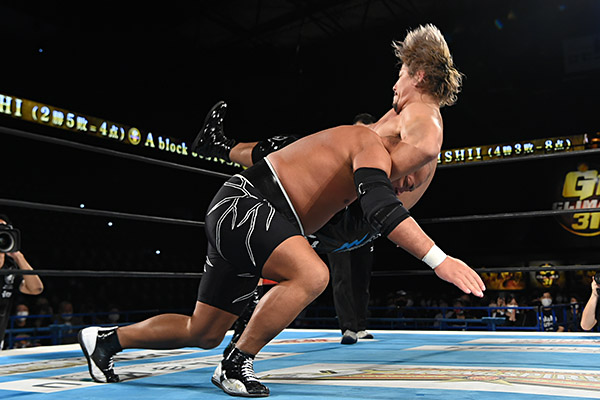 Yujiro Takahashi would face Tomohiro Ishii in the first league match of the evening. The BULLET CLUB member got off to a jump start against Ishii and quickly sent him to the outside, where he established full control. Continuing to dictate the pace, Yujiro would withstand an Ishii powerslam and land a Fisherman’s Buster, before Ishii roared back at boots to the face and landed a suplex.

The Stone Pitbull would follow with an even bigger suplex, this one from the second rope, but though Yujiro wouldn’t successfully escape Ishii’s clutches by biting his hand, he would by delivering a crunching DDT at the ten minute mark. Takahashi would stay on top of Ishii, and blocked some heavy elbows before landing a big lariat and a scary buckle bomb, then Miami Shine for a very near two. 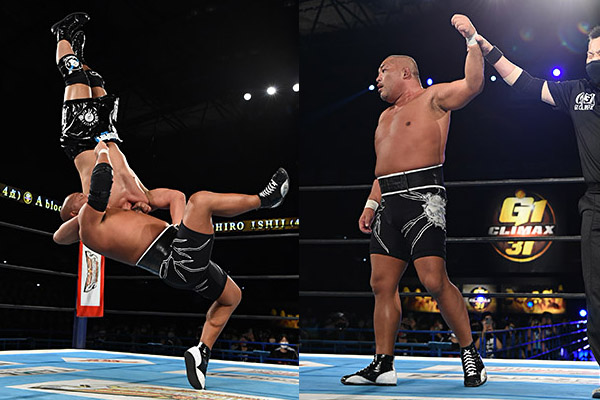 Ishii stayed in the hunt, and resisted Pimp Juice with a backdrop suplex, before connecting with a big enzuigiri. A sliding lariat got two for Ishii, but Yujiro would prevent the Vertical Drop Brainbuster and landed one of his own, followed by Pimp Juice for two. Ishii fought his way out of Big Juice three times, cracking Yujiro with a battering ram headbutt, and a release German suplex, before a Vertical Drop center ring put him on ten points.

A block will be decided on Monday, October 18 in Yokohama. G1 continues with B Block action in Yamagata Thursday.