The full card has been revealed for Power Struggle in Osaka’s EDION Arena on November 6. A stacked lineup will see five titles as well as Kazuchika Okada’s status as G1 winner and top dog heading into Wrestle Kingdom 16, defended across its 9 matches.

Watch Power Struggle LIVE or in English on demand November 6 on NJPW World! 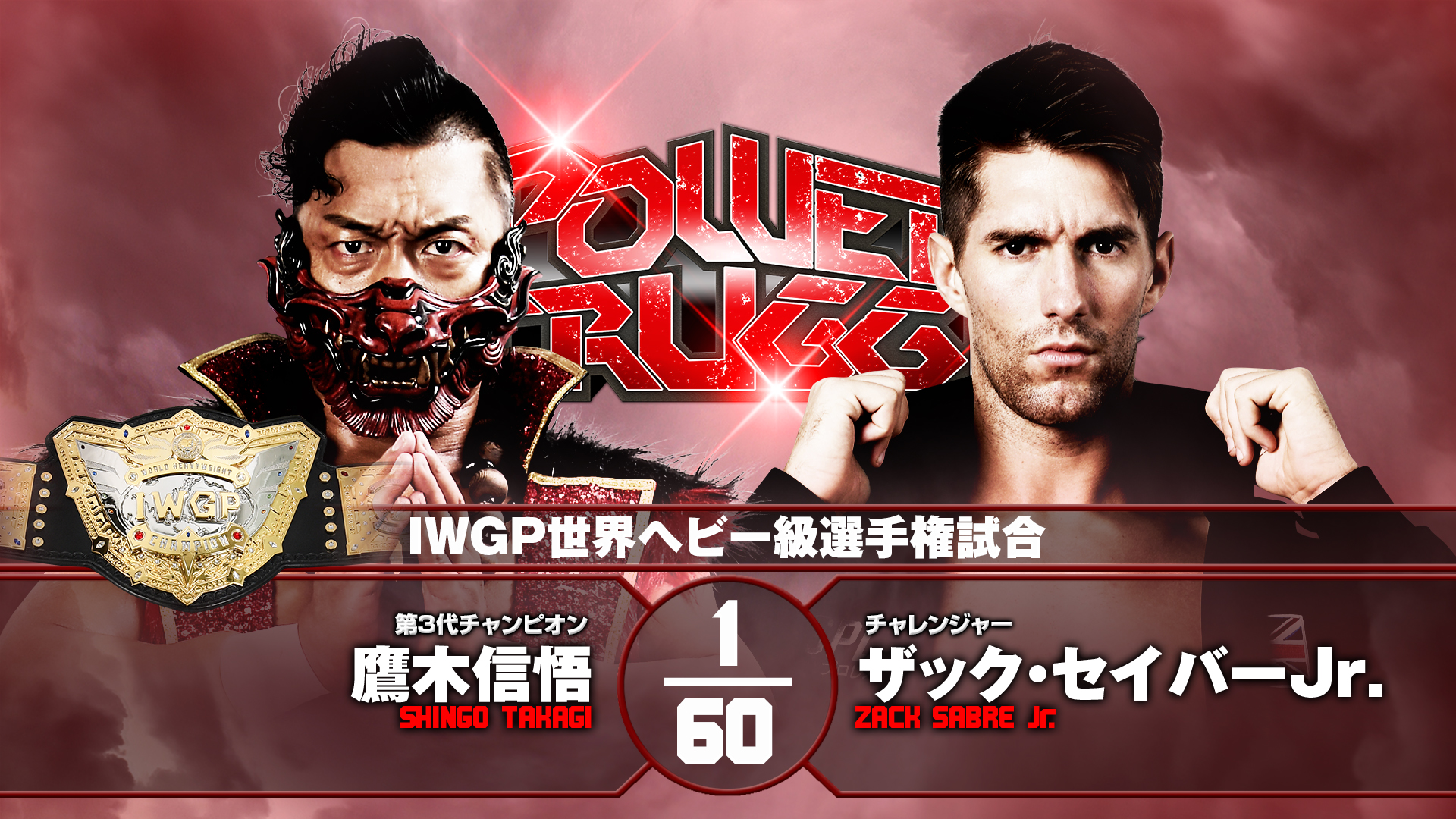 The main event will see Shingo Takagi defending the IWGP World Heavyweight Championship against Zack Sabre Jr. In his second G1 Climax 31 match, Zack Sabre Jr. wrestled Shingo in Ota-ku for their first singles matchup since facing one another in Germany’s WXW promotion in 2009. Avenging a fast loss way back then, Sabre submitted the champion, and though his G1 would come to an end with 12 points off three losses, his decisive win over the Dragon could not be taken away from him. Can Sabre get his second win in as many months over Shingo, this time with the richest prize on the line? 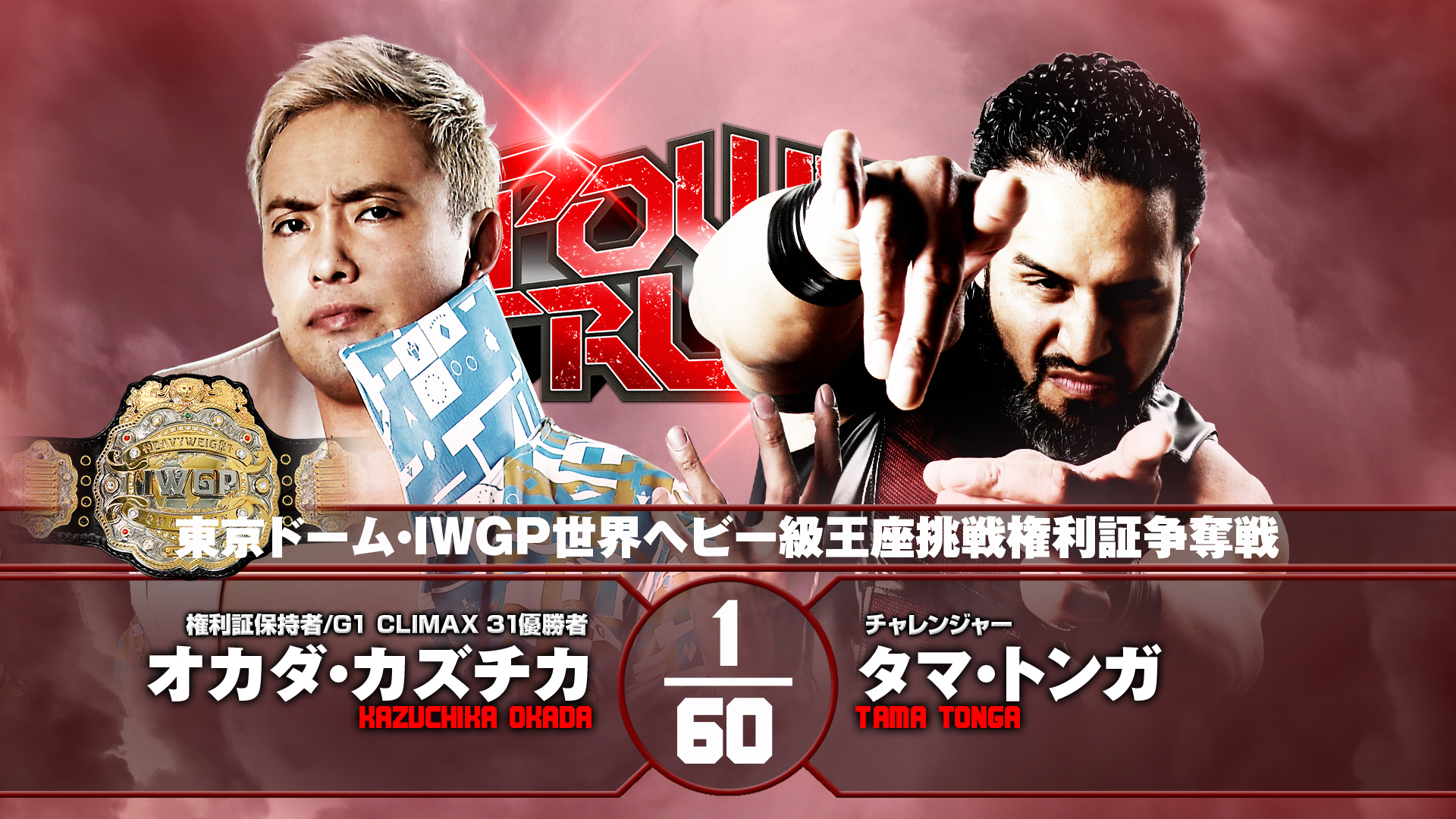 Kazuchika Okada will argue that his prize and status as G1 Climax 31 winner is even greater than that which Shingo Takagi possesses. After his G1 final against Kota Ibushi was cut short due to a dislocated shoulder on the part of the Golden Star, Okada was quick to vow that the two would face off once again in the future. As a material symbol of that promise, Okada requested that he not be granted a briefcase with a contract for winning the G1, but instead the fourth generation IWGP Heavyweight Championship belt that Ibushi retired.

Belt or contract, the fact that it represents the winner of the tournament of tournaments is not in dispute. Indeed, Okada has suggested that the G1 is a greater achievement yet than even the IWGP World Heavyweight Championship. Shingo Takagi may disagree, but before the Dragon comes close to having a tete a tete with the Rainmaker, Okada must get past the ‘Good Bad Guy’. Tama Tonga was the only competitor to beat Okada during the G1. For Okada ‘a debt that needs to be repaid’, for Tama, the chance to surpass, and obtain, greatness. 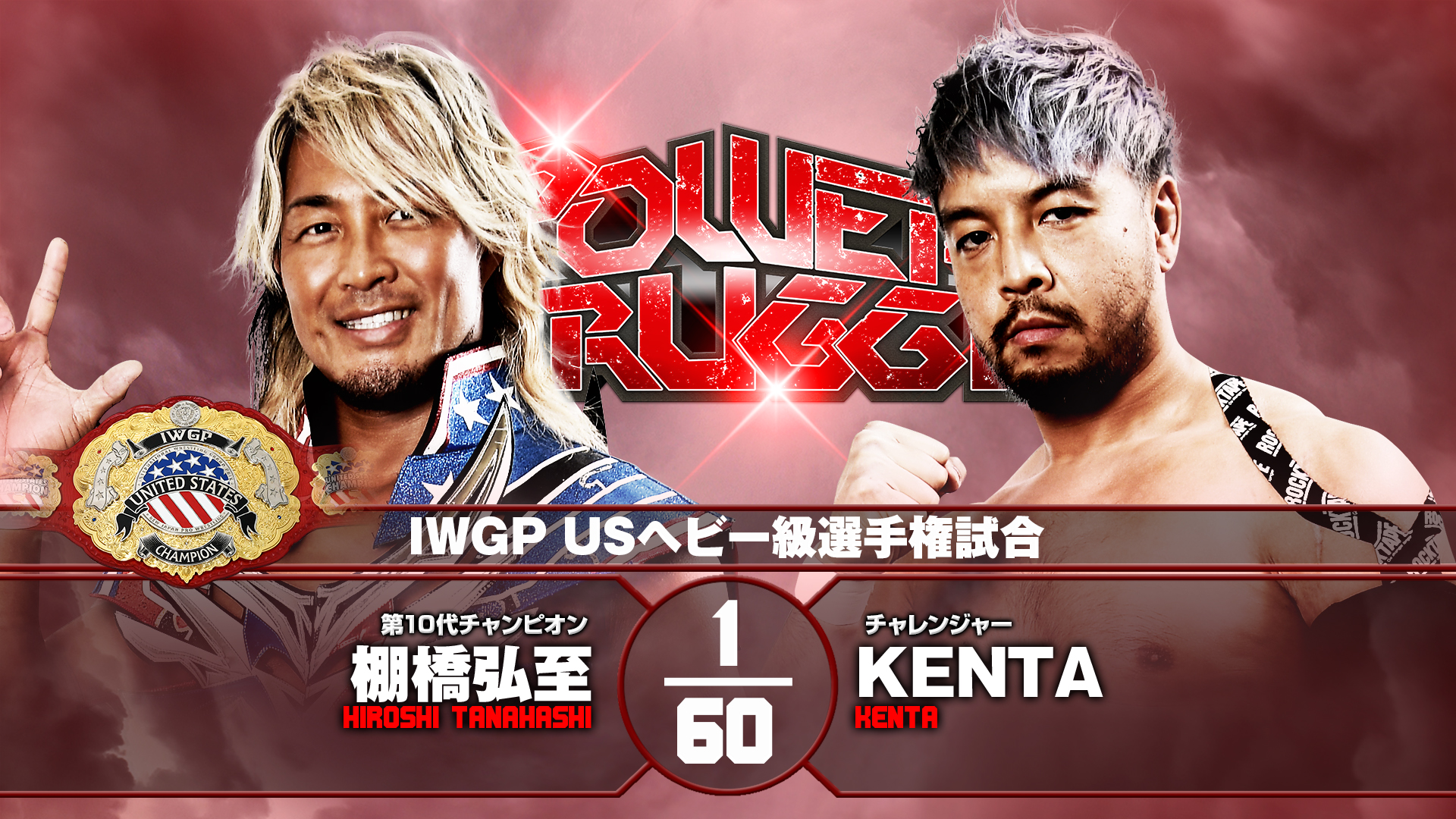 Hiroshi Tanahashi will defend the IWGP United States heavyweight Championship against KENTA at Power Struggle. After an eight man tag at the G1 final, Chase Owens moved to challenge the Ace after beating him in the G1, only to see KENTA lay out Tanahashi with the red belt. As Owens allowed KENTA first shot, the BULLET CLUB member stated that now was the time for him to claim the title that he has been tied to for over a year now. Last year at Power Struggle, it was KENTA beating Tanahashi to retain his right to challenge for the US gold. Will he now beat the Ace for the title itself? 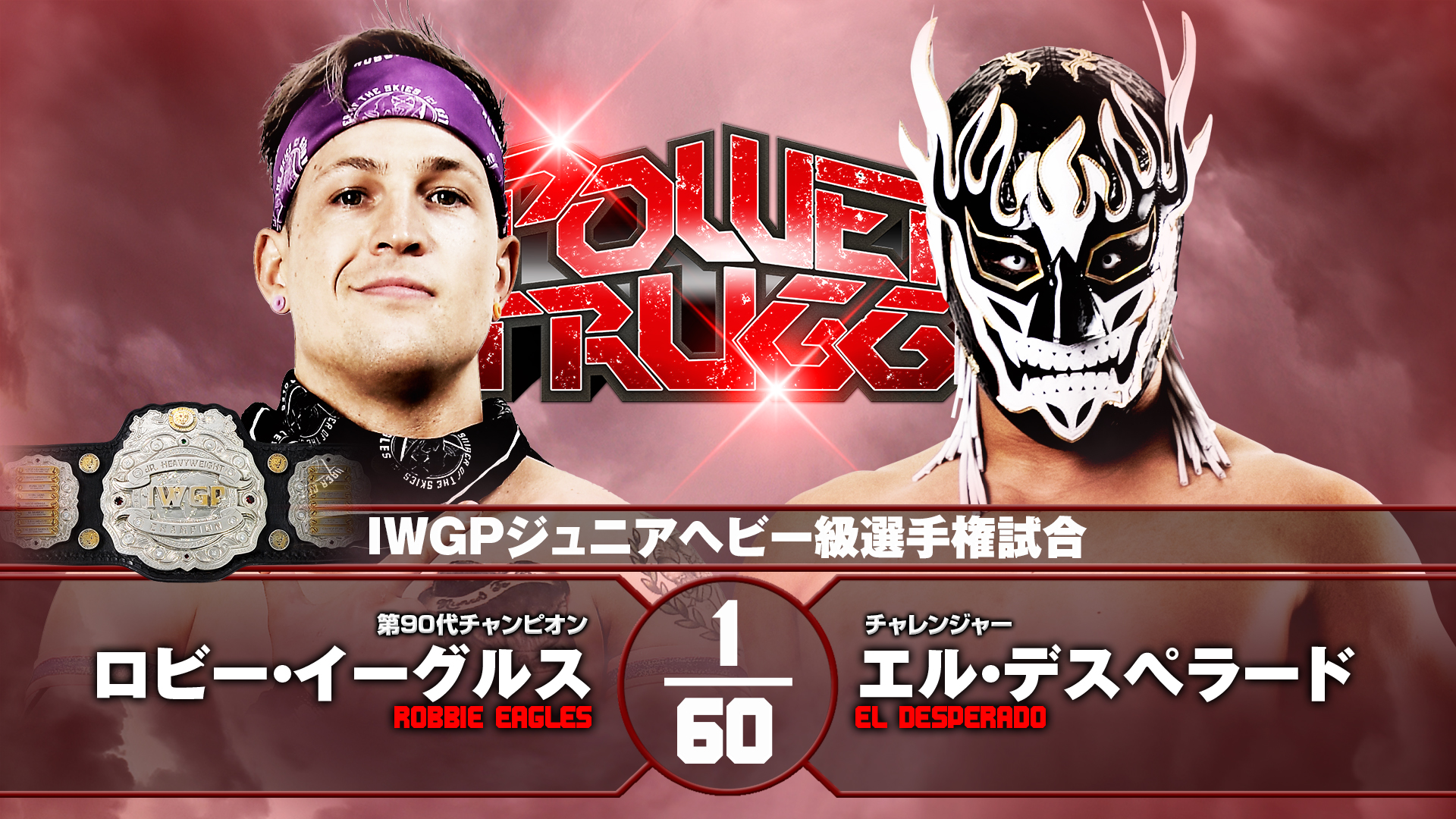 Robbie Eagles defends his IWGP Junior Heavyweight Championship against El Desperado. After beating Desperado to lift the junior heavyweight title at Wrestle Grand Slam in Tokyo Dome, Eagles defended successfully against Hiromu Takahashi in the MetLife Dome before he faced down a Desperado hungry for a rematch. With the IWGP Jr. Heavyweight Tag Team Championships held as collateral in a Korakuen title match, Robbie Eagles and Tiger Mask took the gold in fine form. Yoshinobu Kanemaru would submit to the Ron Miller Special, as Eagles doubled down on a history making year; not only is the Sniper of the Skies the first ever Australian champion in New Japan, he’s also only the fifth double junior champion in history. With Desperado fired up and frustrated though, will that status last past Saturday? 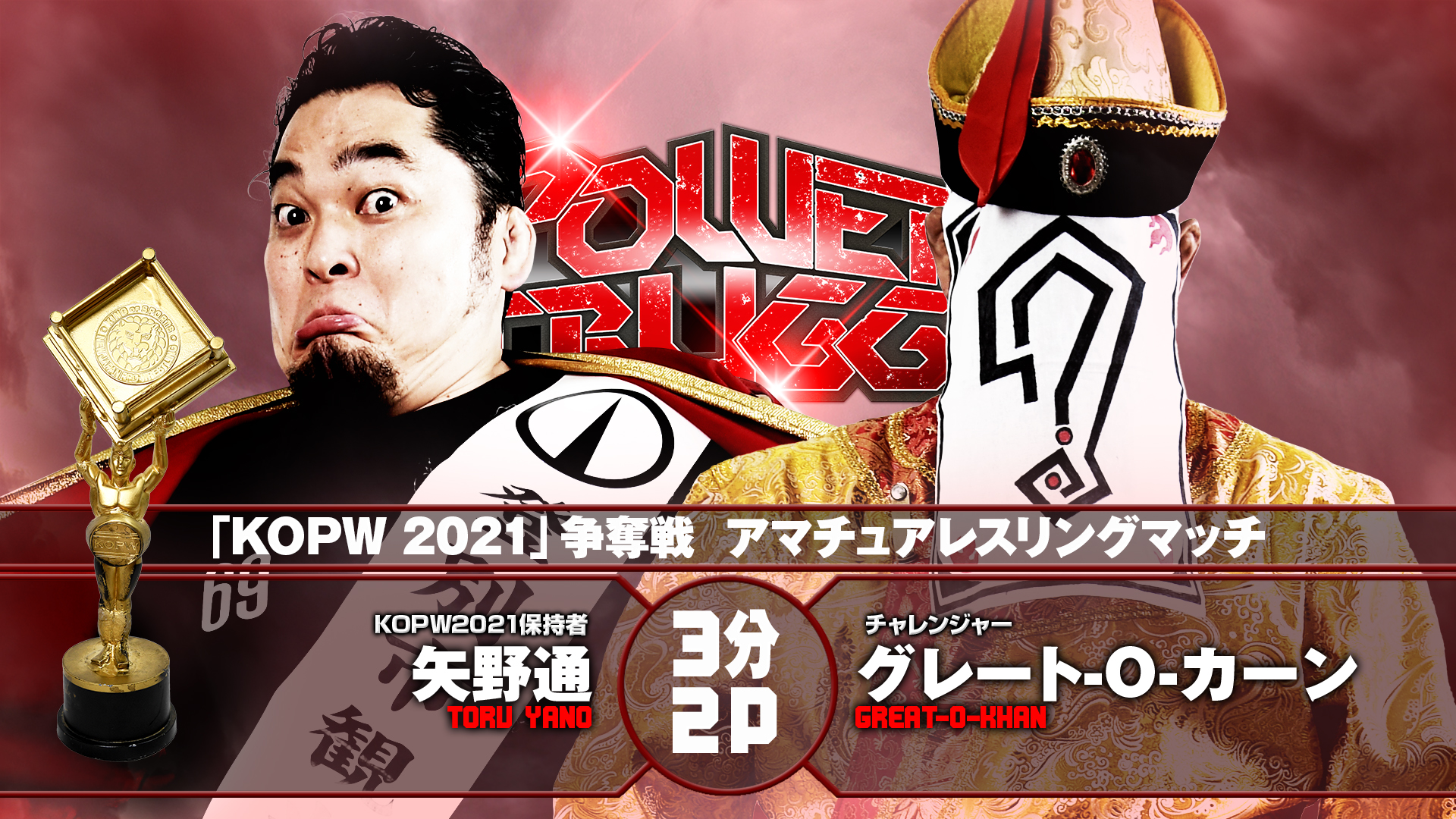 Toru Yano puts his KOPW 2021 trophy up in a match with the Great-O-Khan. Their New Japan Cup match in March saw O-Khan with his long ceremonial braids shorn. In the G1 O-Khan got some measure of revenge, only for Yano to deliver a low blow to the Dominator twice to escape having to kiss the United Empire member’s boot. The furious O-Khan suggested Kiss my Feet stips for their Power Struggle meeting, while Yano wanted an amateur wrestling match, harkening back to both men’s All Japanese roots. The Amateur Rules swept the vote, with this bout now set for two three minute periods. 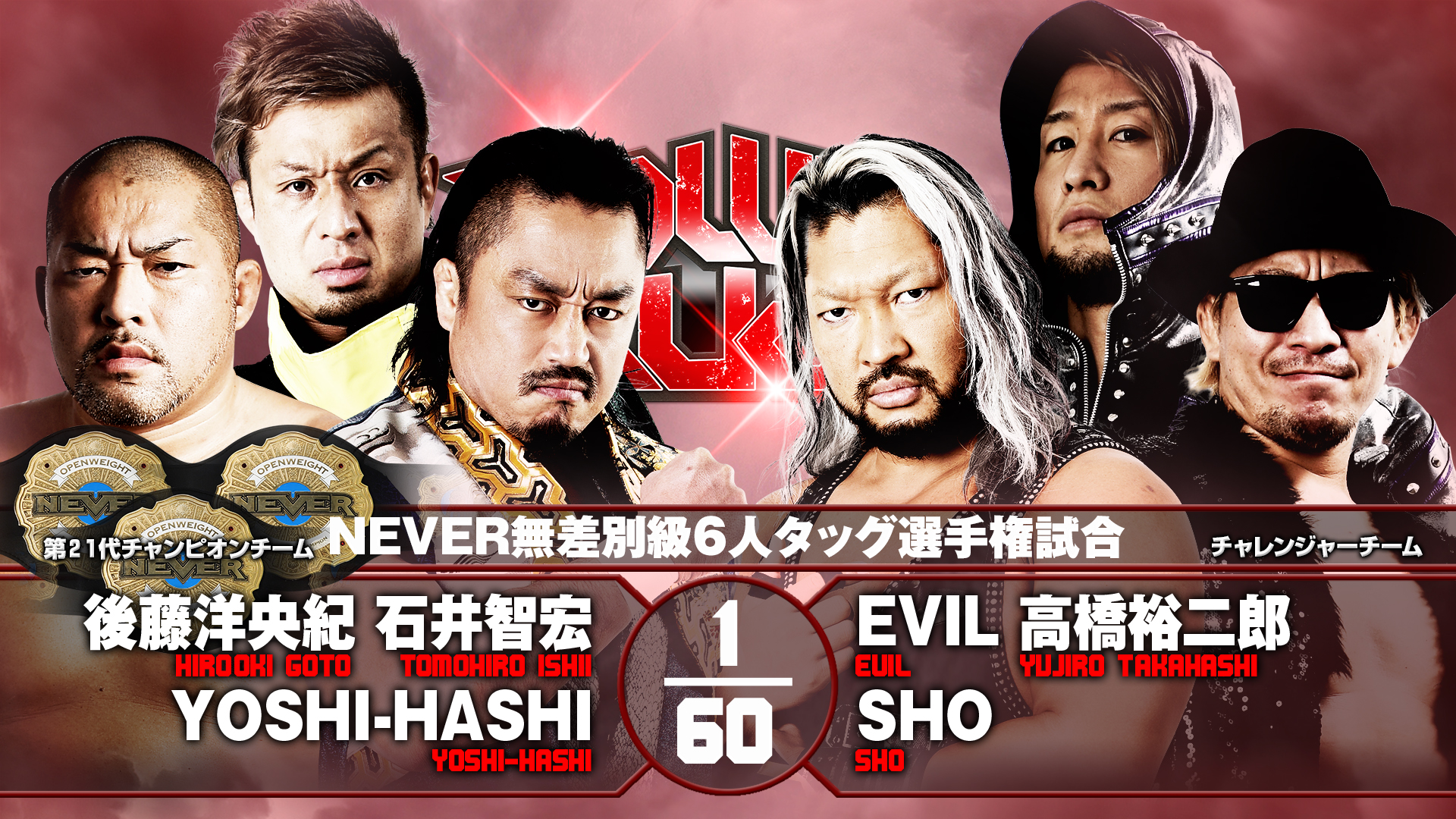 The NEVER Openweight 6-Man Tag Team Championships are also at stake. The CHAOS side of Hirooki Goto, Tomohiro Ishii and YOSHI-HASHI will be looking for their tenth defence. Yet after being assaulted with chairs, steel wires and more at the G1 finals, the HOUSE OF TORTURE emerged as challengers. EVIL and Yujiro Takahashi have challenged the current champions before, with several BULLET CLUB combinations having gone after the gold, but with SHO’s defection to the new HOUSE OF TORTURE subfaction very recent, the group has a man on the inside. Nobody knows the inner workings of CHAOS better than SHO, who might prove to be a secret weapon tonight; at the very least as the champions have experienced, he’s capable of swinging a chair if needed. 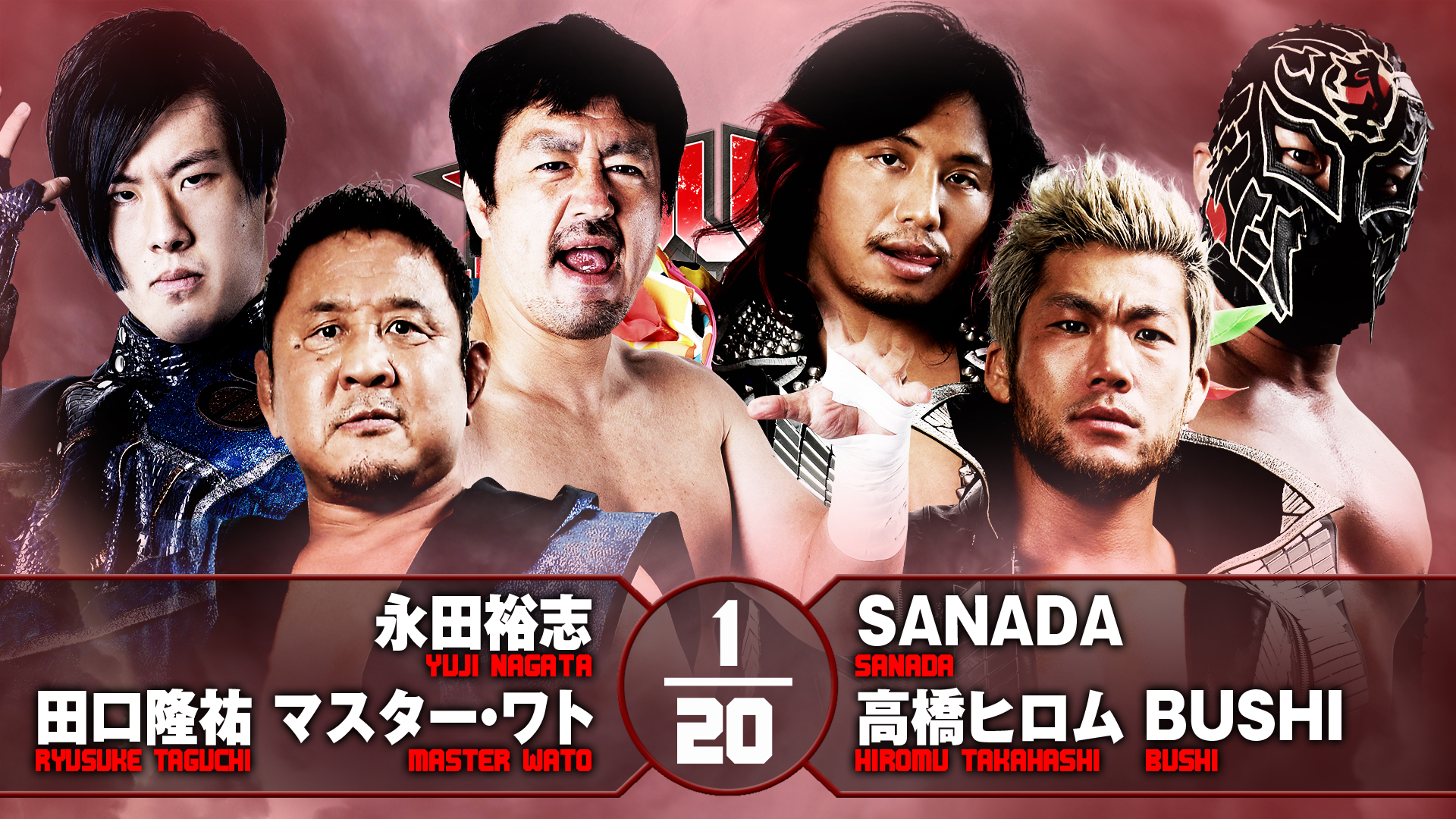 Master Wato, Ryusuke Taguchi and Yuji Nagata will face the LIJ team of Hiromu Takahashi, BUSHI and SANADA. SANADA and Nagata have an intriguing history together and a chemistry that always results in exciting exchanges.  Meanwhile the four junior heavyweights in this bout will be awaiting the imminent announcement of BoSJ lineups. Taguchi and Hiromu in particular have been… antagonistic as of late, with heated debate between the two of how to apply the ‘Neo’ Mongolian Chop. What might ensue? 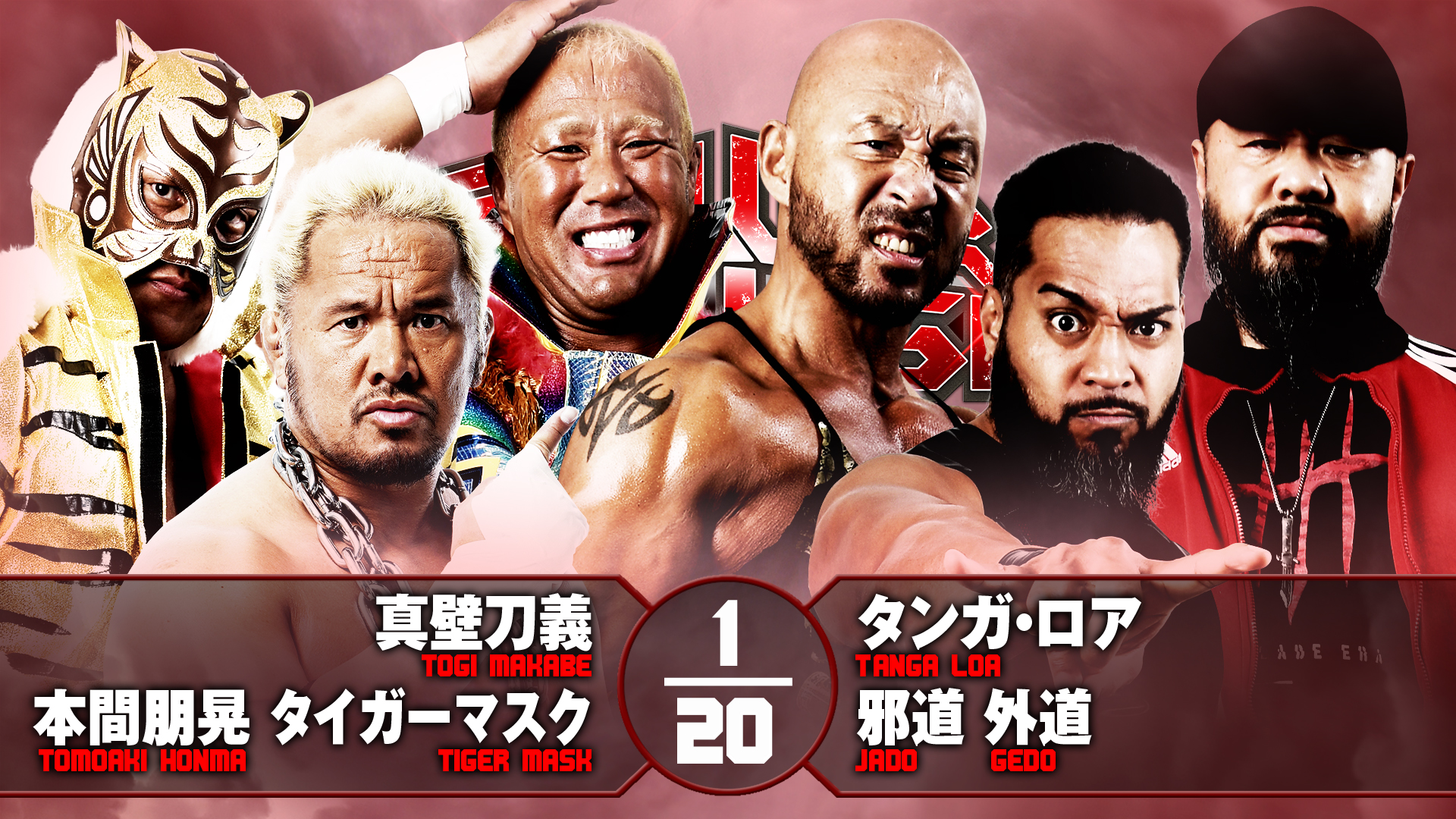 Tiger Mask joins the Great Bash Heel team of Togi Makabe and Tomoaki Honma to face Jado, Gedo and Tanga Loa. Both GBH and the Guerillas of Destiny with Loa and brother Tama Tonga, will be looking to make a big mark in World Tag League to come; GBH having won back to back in 2015 and 2016, the latter at the expense of G.o.D themselves. Yet after a long hunt, 2020 saw the Guerrillas beat their World tag League and Tokyo Dome curses, winning the tournament and securing their first Wrestle Kingdom victory the following January. Tama Tonga and Tanga Loa will be looking to go back to back themselves in 2021; with Tonga competing against Okada tonight, Loa’s mentors and tag legends the World Class Tag Team will provide ample substitution. 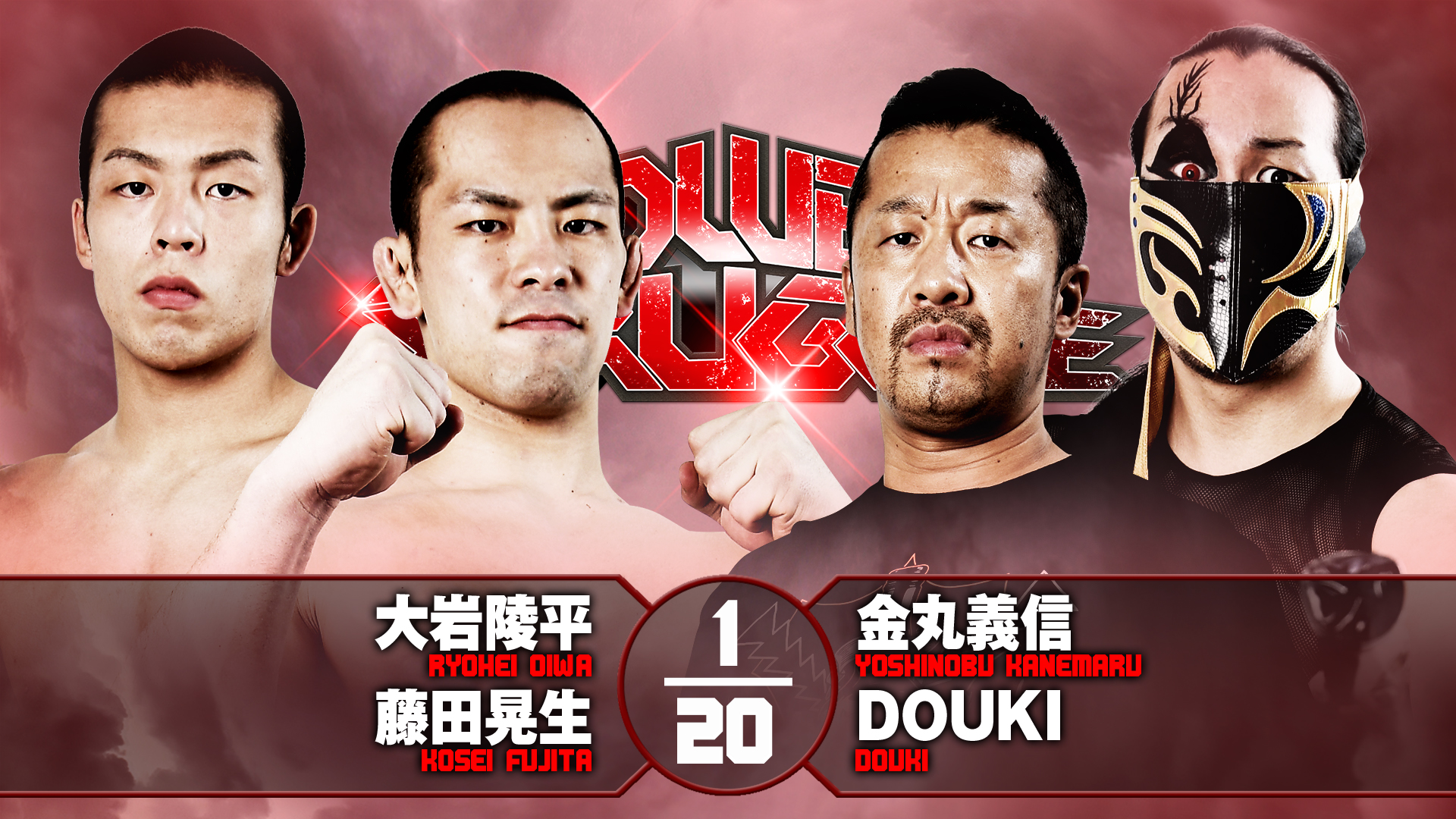 Kicking off the evening, Ryohei Oiwa and Kosei Fujita will face Yoshinobu Kanemaru and DOUKI. We haven’t seen DOUKI in action since before the G1, and he’ll want to make his own impact as Young Lions seek to continue their progression tonight. Meanwhile, with Best of the Super Junior announcements imminent, both Suzuki-Gun members will be showing what they plan to bring to the league starting November 13.