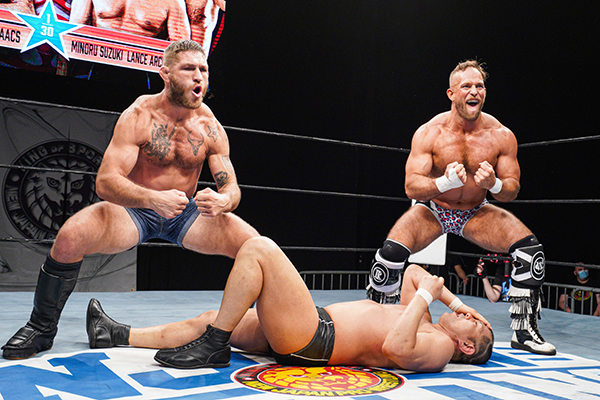 A dream tag encounter headlined NJPW STRONG this week, as Team Filthy’s Tom Lawlor and Royce Isaacs took on hometown hero Lance Archer and Minoru Suzuki of Suzuki-Gun. With a typical Suzuki-Gun jump start, the King and the Murderhawk Monster were not standing on ceremony, as the match qyuickly spilled to the floor. Isaacs and Lawlor would be able to take over in the ring, and put Suzuki in a rare position of pressure, before a knee to the gut of Lawlor created a tag to Archer.

Lawlor would try and slow the giant Archer with a front chancerie, but the former US champion countered with a suplex, and powered out of a desperation sleeper to boot. With a tag assist from Isaacs, Archer would be put to the mat, but still stayed in the fight, and as the match broke down, Archer was able to drill Lawlor with the Blackout, leaving Isaacs alone with Suzuki. 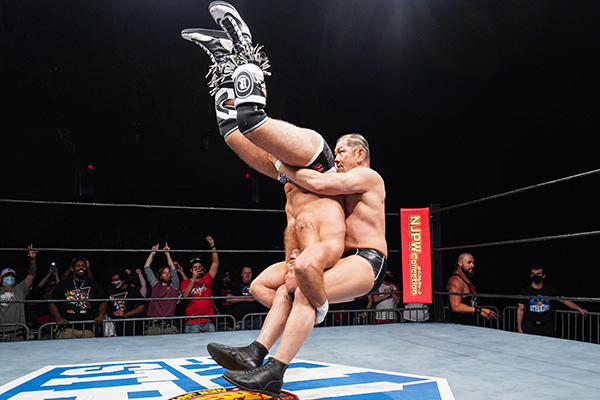 Isaacs brought all he had to Suzuki, a back suplex, and a pop-up knee getting him two. A big German suplex got another nearfall for Isaacs, but a boot from Suzuki would open the door to trademark palm strikes, and then the sleeper and Gotch Style Piledriver for the victory.

Before the night ended though, Chris Dickinson headed out to confront Suzuki. With the two set to meet in two weeks on the Showdown series, Dickinson showed no fear in the face of the King, but in response Suzuki put his ‘little English’ to use: ‘f*** you’

Lio Rush took on Taiji Ishimori in a junior heavyweight dream match. The action started fast and furious, with a high speed exchange leading to a standoff, before Rush caught Ishimori in a leapfrog with a dropkick to the gut. Moments later though, it was Rush misdirected to the floor, and the Bone Soldier would create a weakness in the previously injured arm of Rush.

Countering a Rush handspring with a basement dropkick to the hurt arm, Ishimori continued to work for a submission, and got it with La Mistica into a Crossface, but Rush was able to negotiate himself into a powerbomb counter. Risking the injured arm and shoulder, Rush was able to hit a handspring that sent Ishimori into the guardrail outside, and a tope suicida followed. 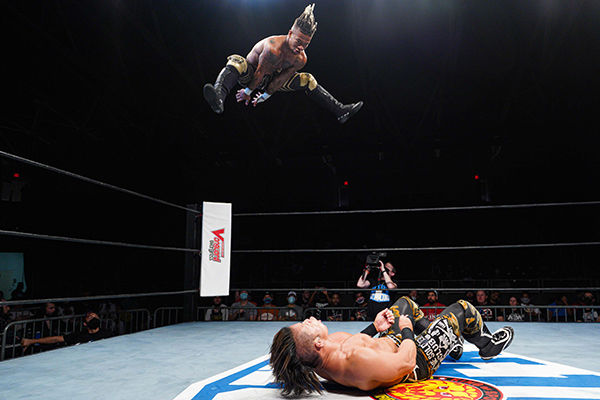 Back in, Ishimori was able to slow Rush’s forward momentum with the Cipher Utaki, but the Man of the Hour was able to out maneuver Ishimori for some huge headkicks. Ishimori refused to kick out on two separate occasions, but the Final Hour frog splash was too much, and Rush picked up a massive victory.

The night’s action started with Fred Rosser and Rocky Romero getting a big win over JR Kratos and Danny Limelight. Rosser certainly felt the power fo Kratos for a good part of the match, but when Romero got the tag, he would take flight with a tope to the floor, while Rosser caught Limelight’s Symbiote DDT to turn it into the Rosser Flowsion.