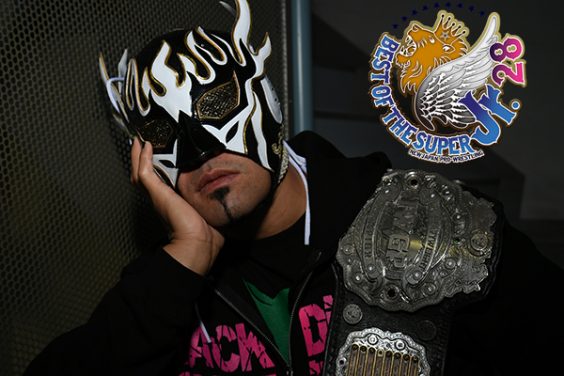 Best of the Super Junior is now officially underway after Saturday November 13’s opening matches. El Desperado was in the main event of night one, carrying the IWGP Junior Heavyweight Championship into the tournament for the first time. Yet this remains a trophy Desperado has never won, and while the champions’ curse doesn’t run as deeply here as in the G1 Climax, there is still a large eight year gap separating Despe from the last champion to win a BOSJ; Prince Devitt in 2013. We caught up with the recently crowned two time champion to get his thoughts on a second reign, and the tournament to come.

Watch Best of the Super Jr. Live or in English on demand on NJPW World! 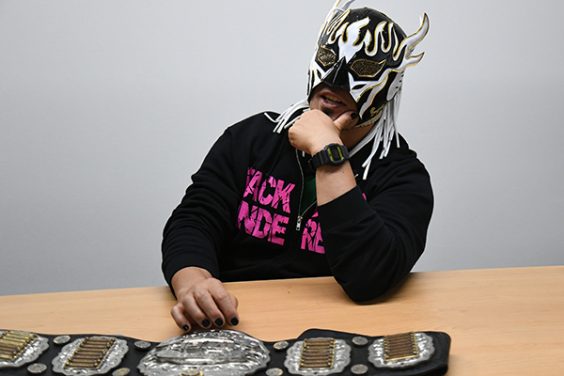 –Heading into this year’s tournament as champion, do things feel a little different to your other four entries?

Desperado: Having the belt or not doesn’t really change how I approach things. If this was single elimination, maybe the champion might get a first round bye, but with a league, everyone is on level footing, so.

–All the same, having just beaten Robbie Eagles to win the title for the second time at Power Struggle, you must feel pretty confident.

Desperado: Going into that title match, all my focus was on Robbie. He isn’t the kind of guy you can afford to take lightly or let anything distract you with. He took that title from me in the first place, after all. But I couldn’t go into this tournament having lost two in a row against him, and I’m glad I avoided that.

–The lineup was announced by chairman Naoki Sugabayashi during our recent online press conference. You were quite scathing about the announcement, saying the way it was done ‘poured cold water’ on the whole thing.

Desperado: It’s such a double standard compared to the G1. And if the G1 was announced that way, the wrestlers would be upset and complain, right? Takagi definitely would. Okada definitely would. Probably that Ace guy, too.

Desperado: He was probably in on it in the first place (laughs). 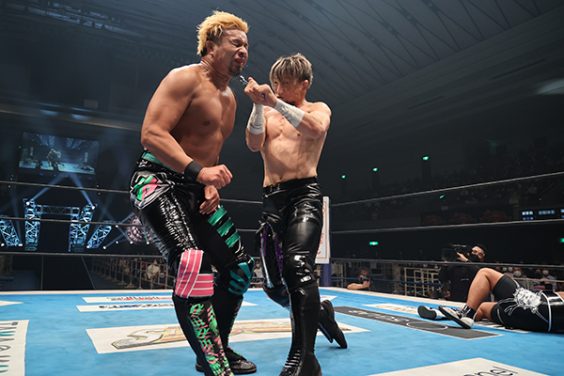 –Your first Best of the Super Jr. match is against SHO. It was against you and Yoshinobu Kanemaru that SHO turned his back on YOH, and then joined HOUSE OF TORTURE afterward at Wrestle Grand Slam in MetLife Dome.

Desperado: I’ve said what I’ve said about the two of them together, and about YOH in particular. I figured SHO would wash his hands of YOH eventually. But he went somewhere that doesn’t suit him.

–You don’t think HOUSE OF TORTURE is a good fit for SHO.

Desperado: He seems to be having fun… but then again during the G1 tour he was just in charge of turning the lights on and off, it seemed.

–SHO certainly seemed to enjoy turning out the lights as he helped EVIL beat Tama Tonga.

Desperado: And now he’s carrying that wrench around and everything.

–Ah, his use of the wrench helped HOUSE OF TORTURE win the NEVER 6-Man titles at Power Struggle.

Desperado: Ah, so he’s a champion now as well. Well, I think you have to have eyes in the back of your head with him now,  and it seems like he’s gained a more opportunistic, tactical mindset. I said it doesn’t suit him, but that means he’s changed his image and approach, and adapting himself to his new surroundings is a strength.

–Is part of you looking forward to facing this new SHO?

Desperado: I’m intrigued. I want to see what he might pull out. HOUSE OF TORTURE are in World Tag League as well, so I think for most of the tour at least we won’t see any runins. So what can he, what will he do on his own? Bear in mind, when it comes to fighting dirty, that’s our wheelhouse. This style, it’s easy for your brain to go a certain direction. The question will be just how far down that road SHO can go.

(This interview took place before November 13, where Desperado lost after HOUSE OF TORTURE interference in Korakuen hall) 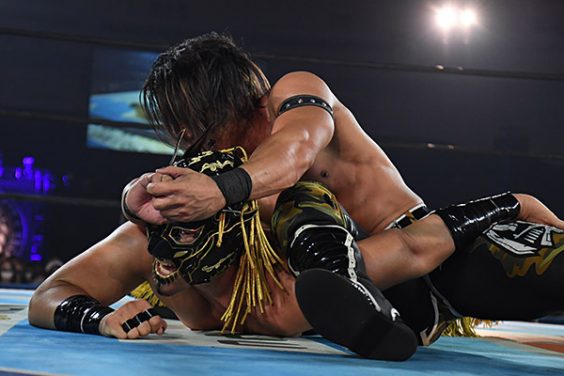 Desperado: I’ll be honest, this is a really tough one. Yeah I beat him in last year’s tournament, and I beat him for the title this July. But both times it was really by the skin of my teeth.

–After you beat Ishimori on July 10 in Sapporo, you said ‘If I can beat a challenger like that, it shows I’m a real champion’.

Desperado: He isn’t one that you gameplan for and have a calculated approach to. He will come at you and you just have to react and deal with it in the instant. Obviously he has unbelievable precision with his offense. I really like a wrestler who can do the fundamentals better than anyone else, and that’s him to a tee. But he’s also in just freakish condition as well.

He’s had a few words with himself, and he’s certainly gotten bigger 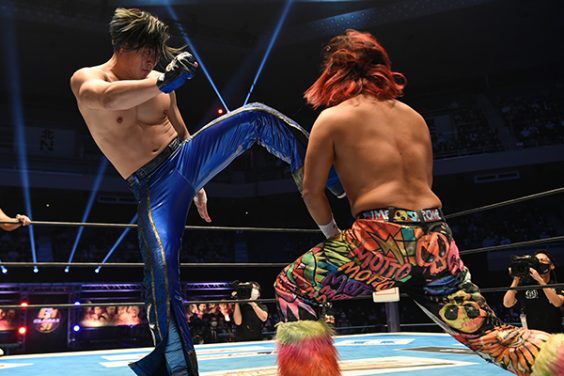 Desperado: I’m still embarrassed about it.

–Wato has made great strides since, and his physique has markedly improved.

Desperado: He’s certainly bigger. I think he’s had a few words with himself about where he was lacking.

–You’re usually very…reserved about any praise when it comes to Wato.

Desperado: Well, you can’t really say anybody’s made changes or made strides until you find out in that ring. Just because he’s bigger certainly doesn’t mean he’s better necessarily. He looks like he’s putting in the work. I’ll find out whether that’s really the case.

–Last year Wato was accompanied by Hiroyoshi Tenzan, but with Tenzan in World Tag League this year, Wato will head to the ring alone.

Desperado: He’s finally being shoved out of the nest, right? I don’t know whether Wato’s too much of a daddy’s boy, or if it was his dad that didn’t want to be an empty nester. I really want to tell him to do something about having Tenzan next to him backstage, he just disappears next to Tenzan every time.

–His second gets the spotlight.

Desperado: Not to say being a good talker means being a good wrestler, but this is a good situation for him, to be forced to speak for himself.

–Have you felt that Wato has progressed since his return?

Desperado: Hmm, maybe. But then again I’ve been in the title mix for the junior tag and singles belts and he hasn’t had so much as a sniff, so that says he’s still not there.

–He should be motivated for this match with the champion.

Desperado: He damn we;ll should be, and he should say that over and over again. Anyways, he’s nowhere near this title. 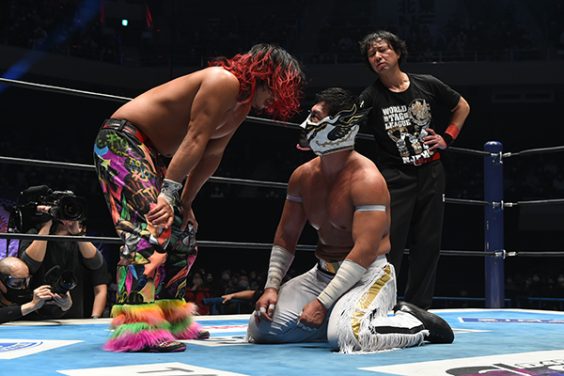 –So right at one third distance of the league you have Hiromu Takahashi in the main event on November 21 in Aichi. Everyone will have that date circled.

Desperado: Obviously Hiromu is a special opponent. He’s the special opponent. There’s a lot of factors involved with this, and at this timing, it’s definitely exciting. That reminds me, *that* match got uploaded free recently, right?

–That super Jr. final match last year that saw you remove that mask and tear into him.

Desperado: He laid his hands on the mask, and then everything happened from there. I don’t think that should affect how you look at this match, but the truth is, you never know what’s going to happen with me and him, and this could make or break the tournament for me, completely. It’s like if I can get by on 80% normally, just to survive I have to put in 120% here. That’s exciting, it is.

–You can’t miss this one.

DOUKI has plenty more up his sleeves 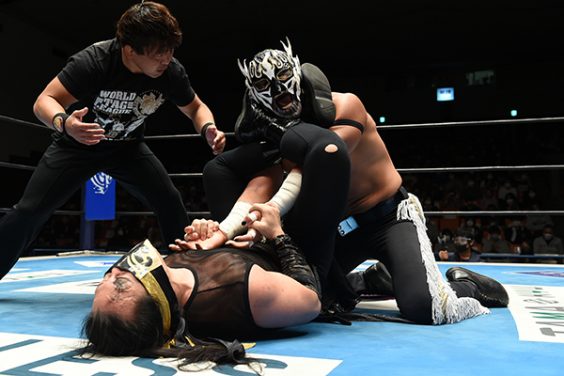 –November 24, and it’s back to Korakuen hall where you face DOUKI. A year on from your Numero Dos submission win over him, what are your thoughts on DOUKI?

Desperado: Oh, he reminds me of me for sure. But I don’t think he gets it. I remember back when TAKA (Michinoku) and Taichi would always be talking about me, nudges in the ribs and ‘you see?’ kinda thing. It was always ‘no I don’t see!’ every time for me. I used to get so hot. But that’s where he is.

Desperado: Yeah, exactly. It wasn’t until I started teaming with ‘Nobu that it was like ‘Ah! NOW I see’, heh. I think actually, if he had that experience of learning with ‘Nobu, he could match or beat where I’m at. He really has all the potential in the world. But when it comes to the BoSJ finals this year? Hate to say it, but he isn’t there yet.

–A big upside, but he hasn’t had his break yet.

Desperado: DOUKI and Wato both, there’ll be plenty of chances to come around for them. But with me, ‘Nobu was a key figure, and a big turning point. There needs to be someone to fill that role for DOUKI.

–It could come in this tournament.

Desperado: Sure enough. For me it was a partner that helped me turn the corner, but with him it might be an opponent that does the same for him.

–Of course, DOUKI made his debut in New Japan when he replaced you in the 2019 BoSJ.

Desperado: I think he was really walking on eggshells when he first came in here and he was far too timid, but he’s really progressed. He moves well, he has a ton of offense, and you can tell he’s hungry. Plus, when it comes to lucha he has plenty more tricks up his sleeves. i’m looking forward to this one.

More in part two of the interview!