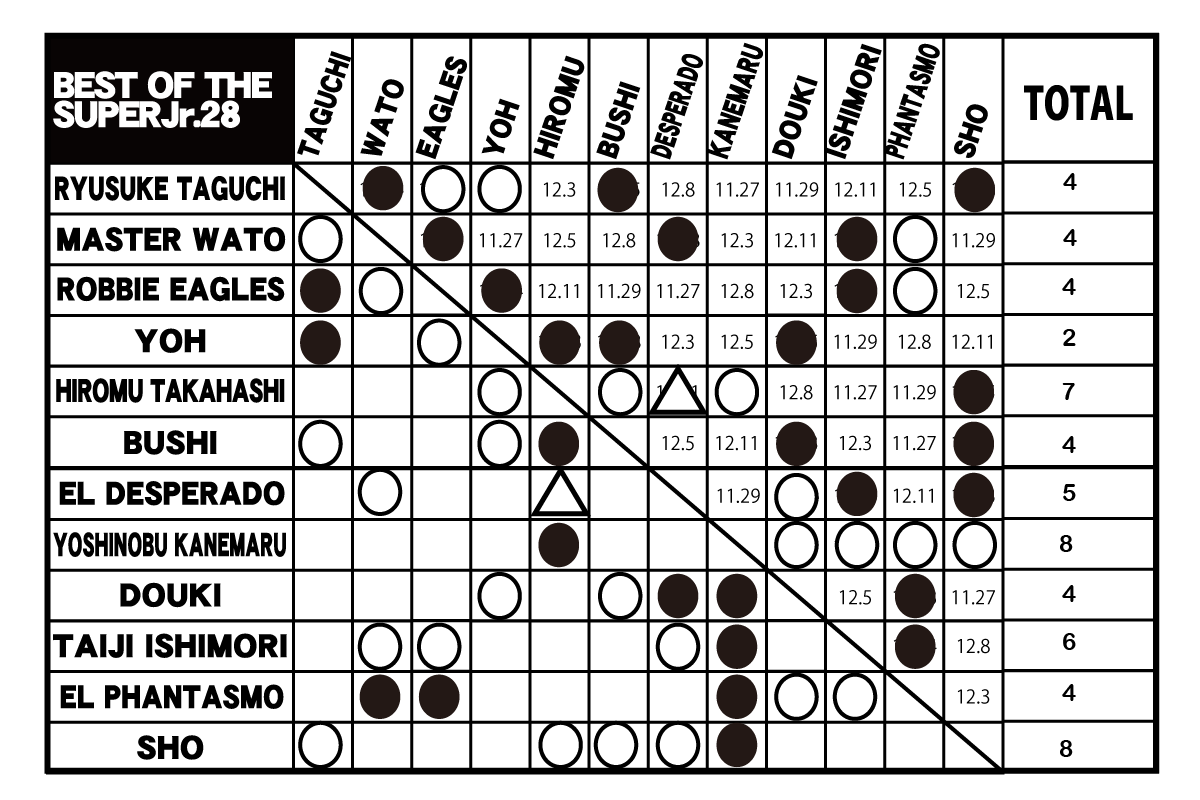 Best of the Super Jr. passes its midway point on Saturday November 27 in Fujisawa, as competition gets more and more heated with just over two weeks to go before the Ryogoku finals.

Watch LIVE or in English on demand on NJPW World! 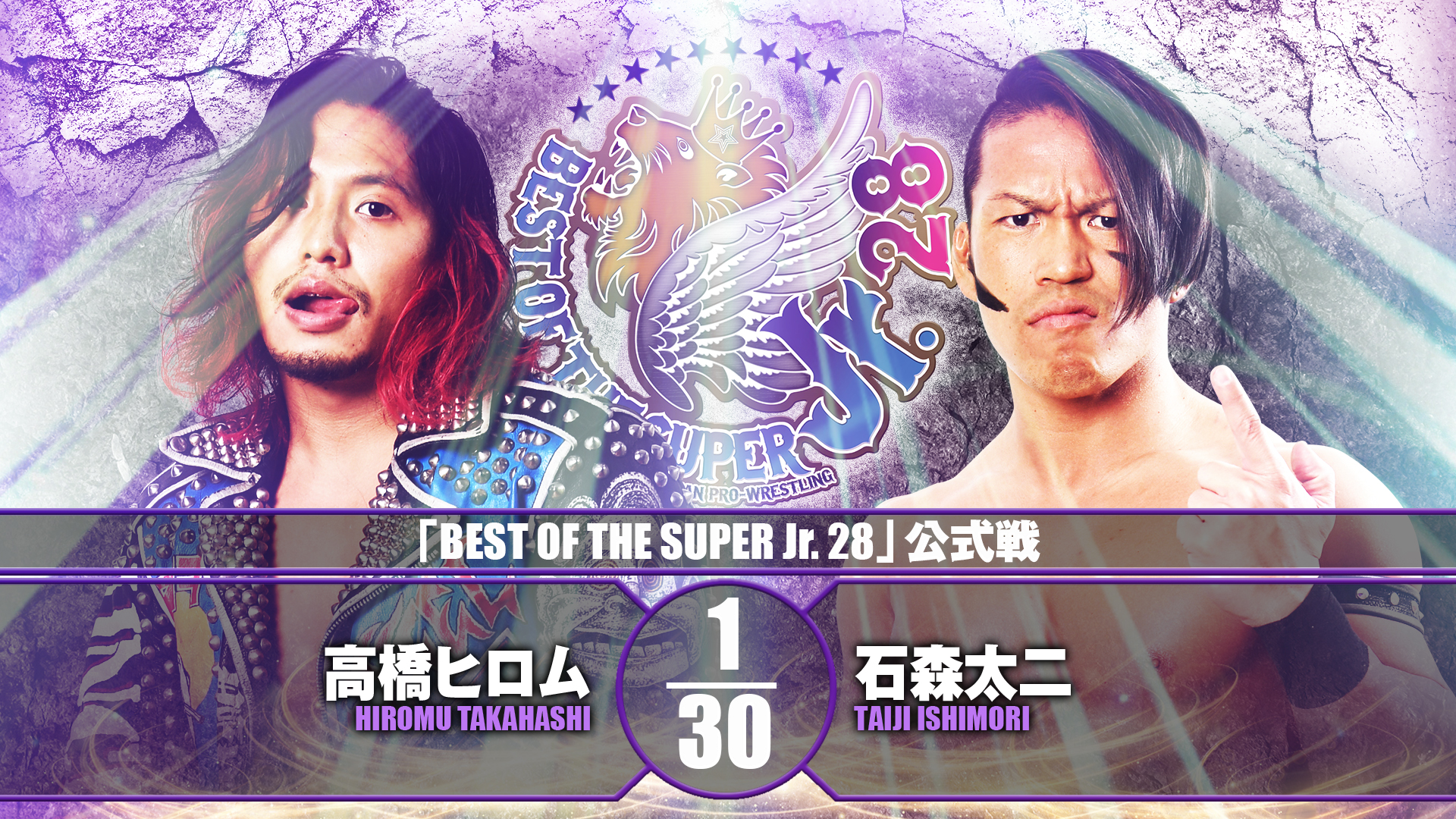 At the top of the card in Fujisawa, Hiromu Takahashi and Taiji Ishimori do battle. Almost one year ago, Hiromu beat Ishimori on January 5 in the Tokyo Dome to lift the IWGP Junior Heavyweight Championship, and made the promise on his exit that soon his then freshly won title would headline in the Dome. This match could be a big part of that plan, as Hiromu still vows to win the Best of the Super Jr and headline in Wrestle Kingdom, Will Ospreay’s IWGP World heavyweight Championship challenge notwithstanding.

Ishimori has only defeated Hiromu once, at Summer Struggle in Jingu last year, and it was with a gameplan that has served the Bone Soldier well in recent months. It was with concerted shoulder work that saw Ishimori victorious over El Desperado last week in Korakuen Hall, that won him the IWGP Junior Heavyweight Championship last summer over Takahashi, and nearly saw him to a retention at Wrestle Kingdom. Will Hiromu be able to counter Ishimori and stay on the winning track? After pulling up short rather than rock his partner El Phantasmo with a loaded boot in Korakuen Hall, Ishimori is sure to have no such mercy tonight. 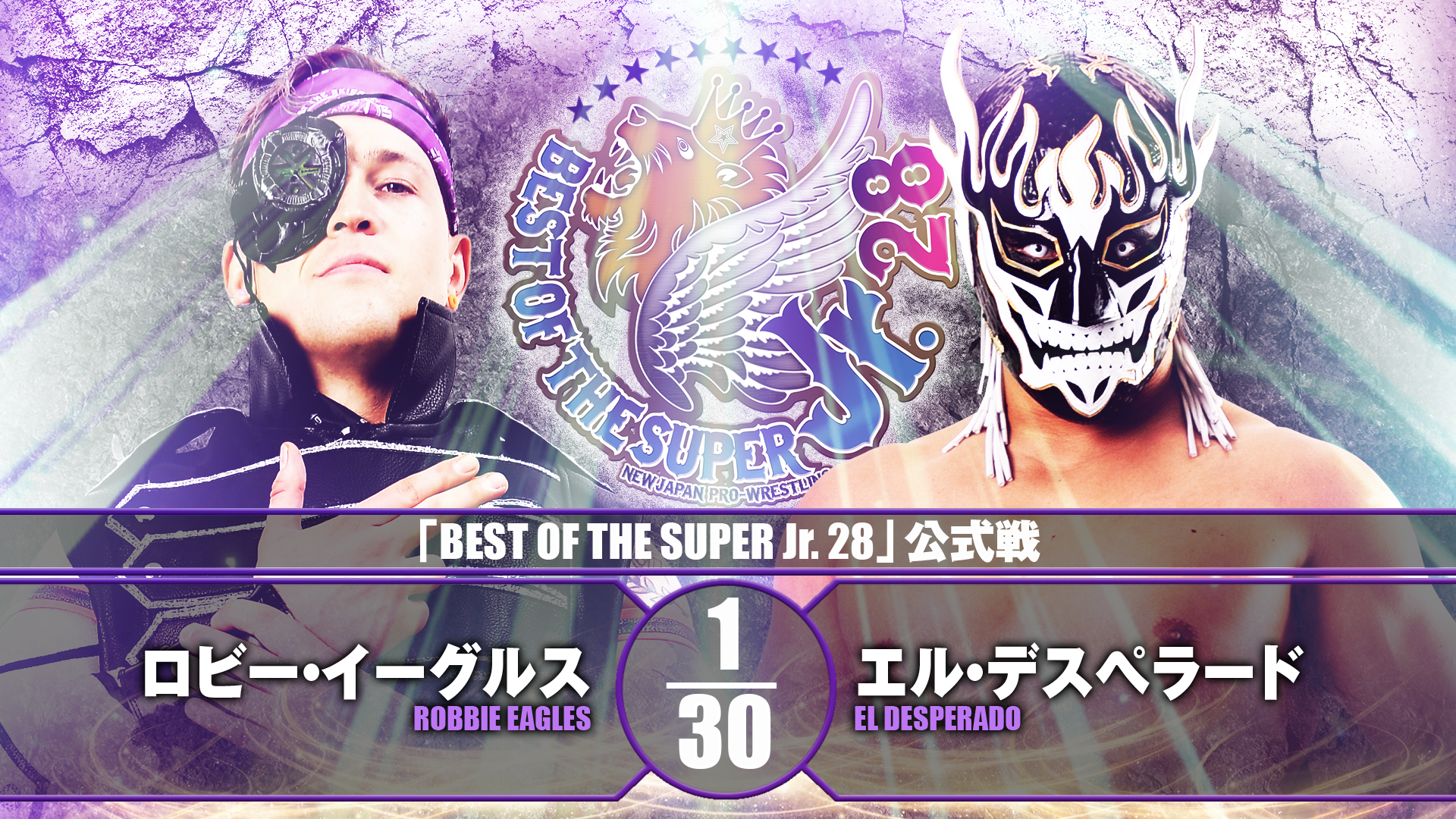 Another high profile championship rematch will see Robbie Eagles face El Desperado for a 2021 rubber match after one win apiece over the IWGP Junior Heavyweight Championship. Eagles shocked the world with his title win at Wrestle Grand Slam in the Tokyo Dome, and battled intensely to his ultimate defeat back to the masked rudo on November 6 at Power Struggle.

Neither the current nor the former IWGP Junior Heavyweight Champion has gotten off to the hottest of starts in the first half of this tournament; after a loss to YOH in Korakuen this week, Eagles has a negative record while Desperado’s is barely even at two wins, two losses and a draw. With a spot ain the finals December 15 hanging in the balance from here on out, there is no doubt that this will be a hotly competitive matchup. Each will likely try to target the other’s knee; or might a change in traditional strategy see one man victorious? 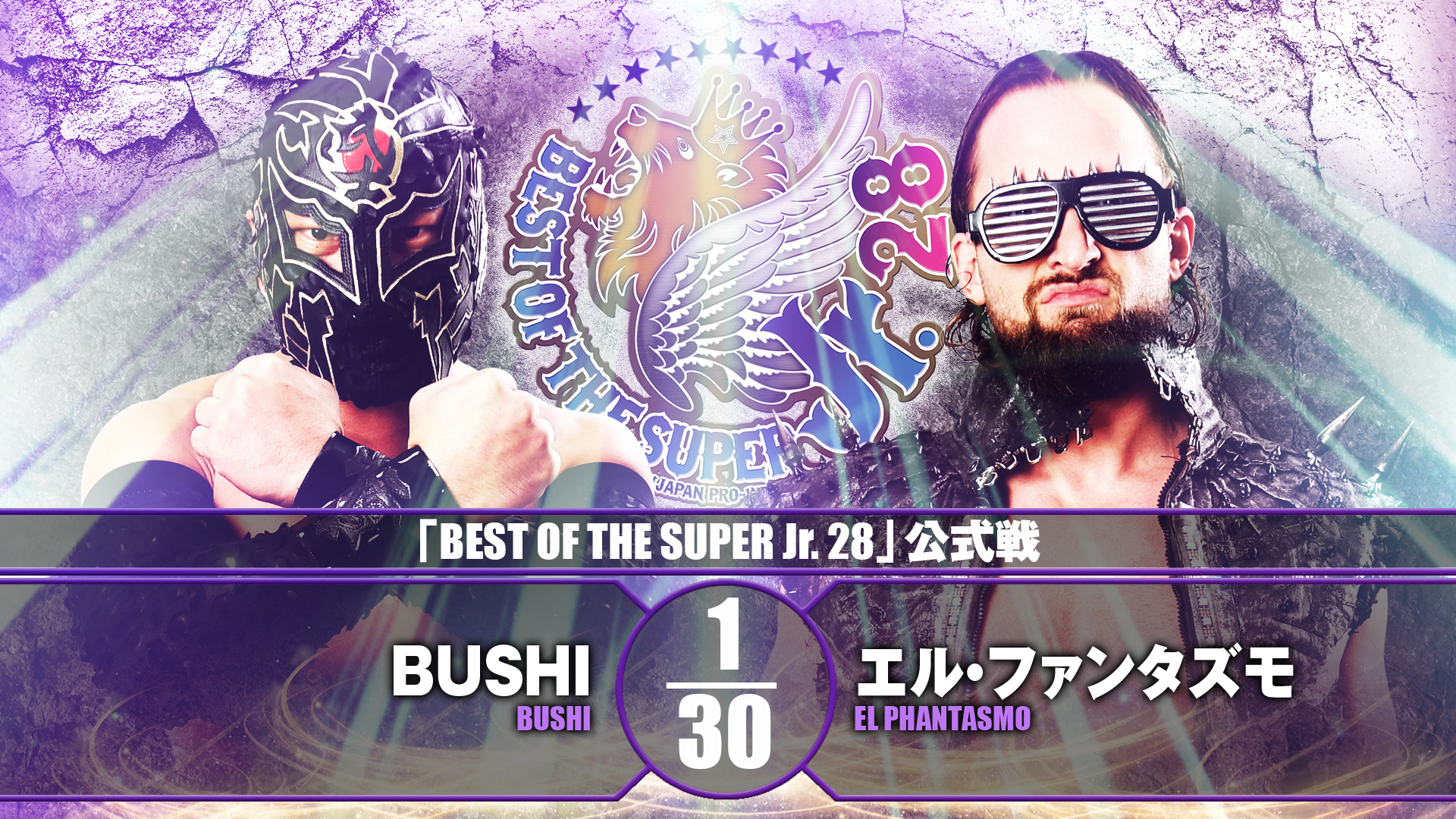 Two members out of a three way bout at Castle Attack this February that saw El Desperado emerge as IWGP Junior Heavyweight Champion, and after several tag encounters, BUSHI and El Phantasmo meet for only the second time directly one on one tonight. Their 2019 BOSJ meeting saw ELP on top; after a rocky campaign for both men thus far has seen them to 4 points each, how will this encounter play out? 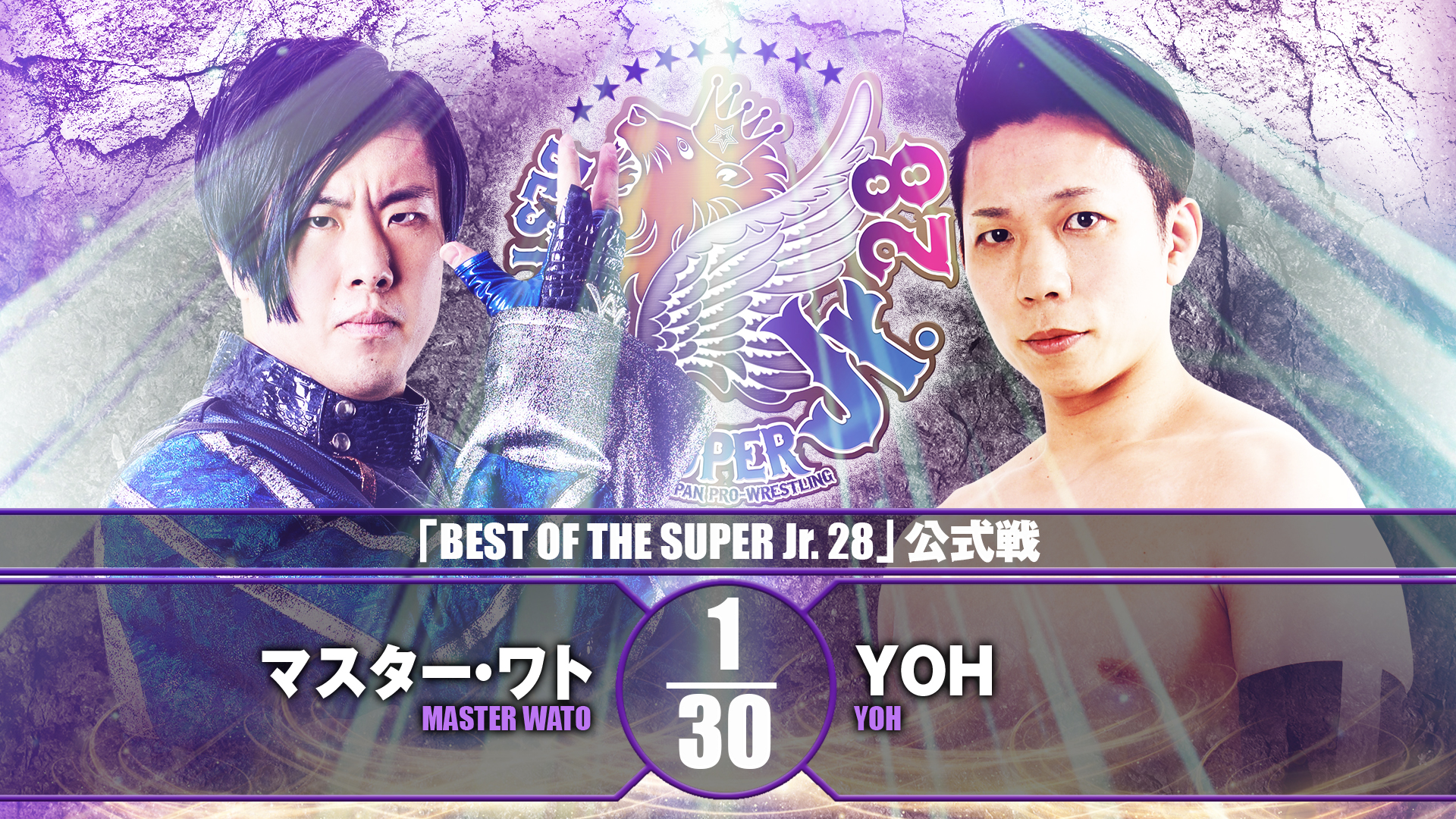 After a roll-up win over Robbie Eagles in Korakuen Wednesday, YOH’s torrid start to Best of the Super Jr. 28 has finally seen some light as YOH sits at two points. Meanwhile a win against Ryusuke Taguchi has seen Master Wato improve to four points, but the young future Grand Master still has to come to terms with a negative win:loss record in the first half of his campaign. It’s safe to say neither start has been ideal, but the second half of the tournament could see things change with a big win in Fujisawa. 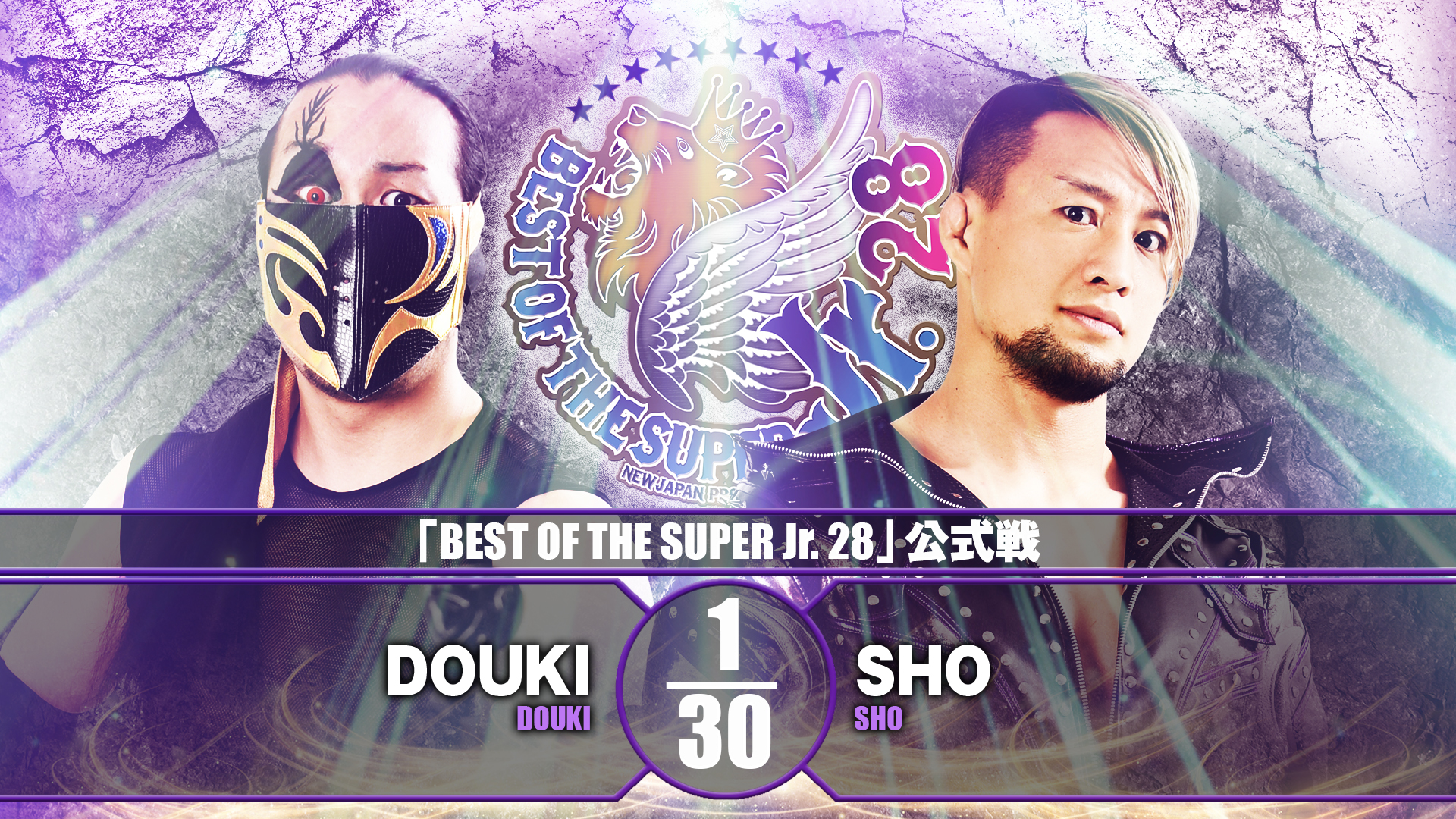 In Korakuen this past Wednesday, Yoshinobu Kanemaru was the de facto Babyface Master against SHO, ending the Murder machine’s seemingly unstoppable run to the delight of fans the world over. Meanwhile, DOUKI would battle El Desperado to a hard fought loss, eventually forced to submit to Numero Dos. Could that contest with his Suzuki-Gun brother inspire him to success against the Murder machine, or will he experience SHO’s brand of torture in Fujisawa? 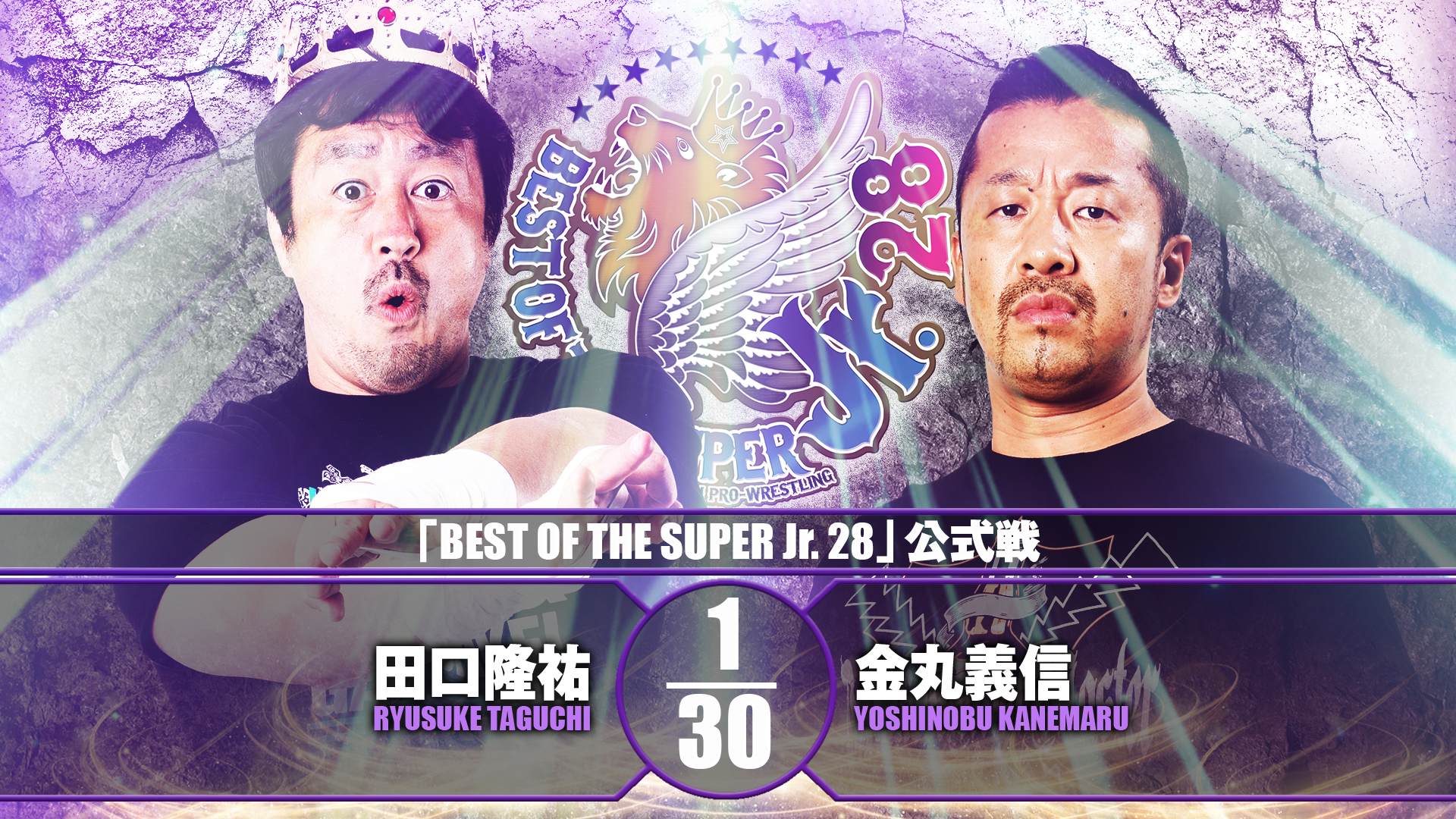 The two most experienced veteran competitors of the tournament face off in the first BOSJ match of the night, as Ryusuke Taguchi takes on Yoshinobu Kanemaru. Is the master of heels best the master of hips? Taguchi is looking to regain momentum after a loss to partner Master Wato in Korakuen Hall this week, while Kanemaru is riding high having ended the dominant dirty run that SHO experienced in his first four matches. This is going to be a battle of sharp minds and experienced hands, but who will emerge victorious? 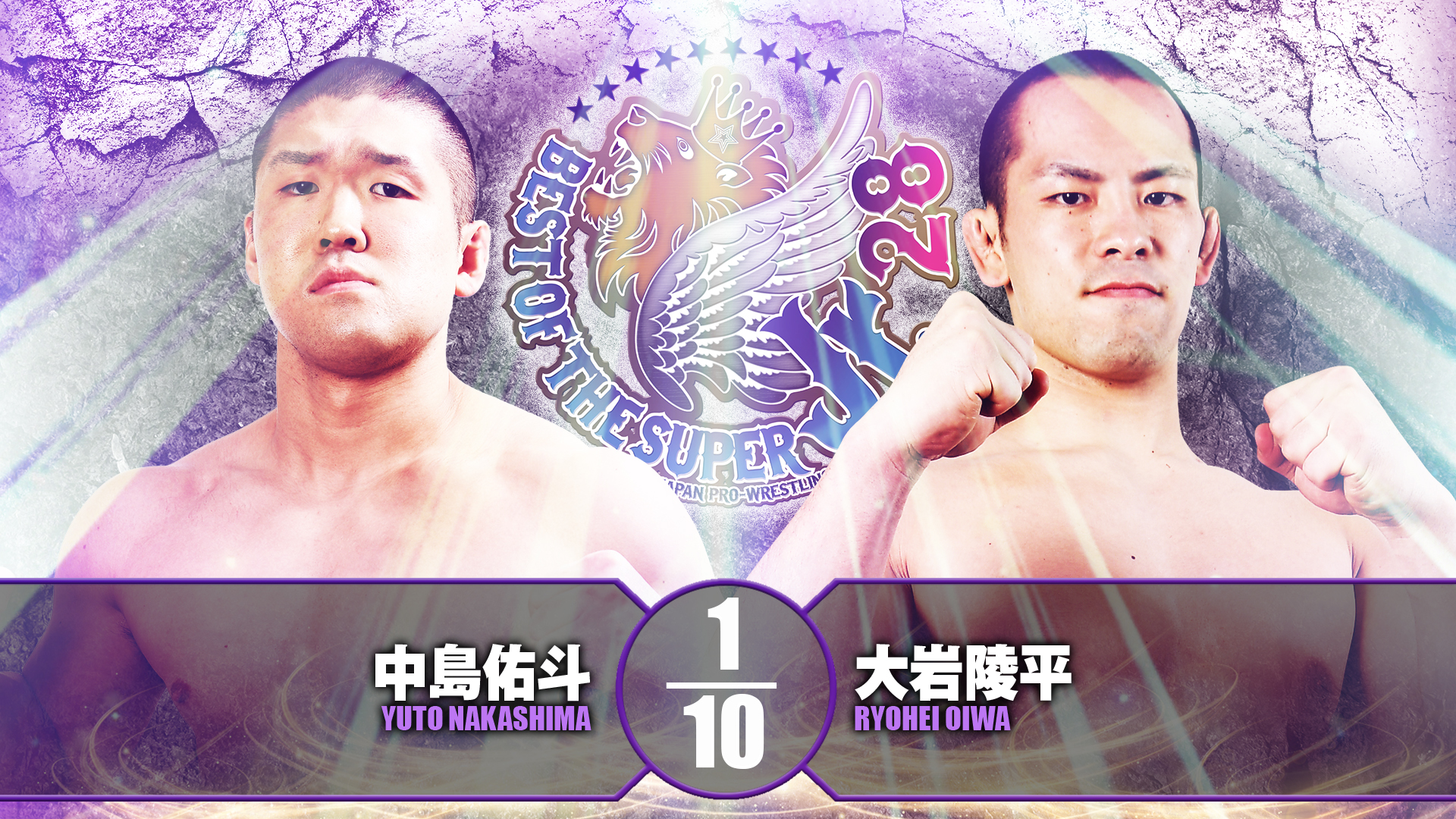 With all three of our Young Lions having wrestled one another six times so far, we don’t seem anywhere closer to breaking the trend of ten minute ties. Could this finally be the night to break the deadlock? We’ll find out Saturday.