The Wrestler Discusses STRONG and more 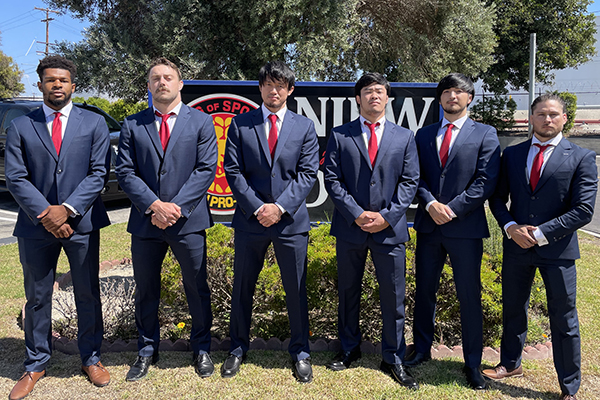 Katsuyori Shibata is preparing to deliver a major announcement on December 15 in Ryogoku Sumo Hall. Prepared statements aside though, the Wrestler has plenty of off the cuff opinions, and in the wake of his grappling exhibition with Zack Sabre Jr. in October, spoke at length about the progress of his students, NJPW in the US and more.

–I’d like to get your thoughts on the LA Dojo class at the moment. On August 14, Yuya Uemura joined the Dojo.

Shibata: He was very welcome. When I would come back to Japan earlier in the year, I would work with him and Gabe (Kidd). He stuck out to me back in 2019, in the Budokan. He wasn’t in the match with Clark (Connors) and Karl (Fredericks), but he got right in there and threw strikes at Clark afterward.

–When did you start working with him?

Shibata: It would have been Korakuen, I think last February? He came to me asking for a way into a cross armbar, and we worked on a few things together. After that COVID meant I couldn’t go back to the US, so I stayed in Japan and trained with him and Gabe.

–How did you feel when he asked to join the LA Dojo?

Shibata: Happy, obviously. He decided that he needed the Dojo, that it was the right place for him. I’m happy he felt that this was the best path. I’ve been through the same thing he has, when you’re young and you don’t really know what the best direction for yourself is. 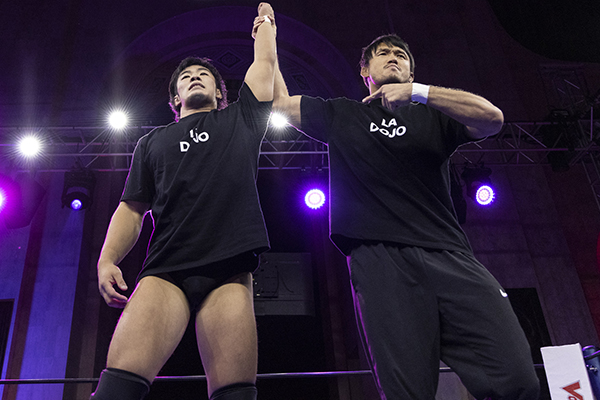 –That can be a tough process.

Shibata: Right. And, this is something that I’ve talked about a lot before, but I do a lot of teaching with pain. If you want to use a hold or a move, and you don’t know exactly first hand how it hurts you, then you’ve got no hope. You have to be able to take that pain if you’ve got any hope of being even a little bit convincing to the fans or your opponent.

Shibata: He’d been doing a lot of getting in and out of holds in practice, and doing a lot of weight training, but he needed toughening up, quite honestly.

–So that was your job?

Shibata: If you train with me, then you will get stronger. There’s no two ways about it. In Japan, weight training gets lumped together with practice and it’s all called ‘training’, but it isn’t. That’s a workout.

Shibata: In America, the ‘training’ is in practice, directly connected to wrestling. The rope running, the bumps, the sparring. It’s completely separate to the body building part. In Japan, wrestlers might lift weights for a few hours and say ‘that’s practice for today finished’, and you haven’t practiced a damn thing. Obviously we work out in the LA Dojo, but the main part of it is training in the ring. After that, then yeah Narita might work on his kicks, or you can bench a few lbs. 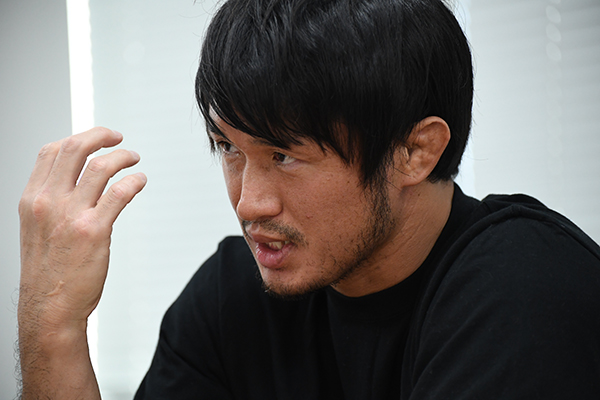 –How about Ren Narita? Lately he looks uncannily like you.

Shibata: I get that a lot (laughs). But there’s talk about him being a Katsuyori Shibata clone, and that’s not the plan at all.

Shibata: I was talking with our trainer, Sugano-san recently, and I asked him about Narita, what he thought about how he moved. He said ‘if it was someone else, then I’d say they were ripping you off. But he’s studied under you, and that’s what I see in him’.

–It’s more that the ‘Shibata-ism’ is coming out naturally in him.

Shibata: I used to train a lot with (Masakatsu) Funaki, and I started moving and looking just like him, subconsciously. With what Sugano-san said in mind, it struck me that looking like somebody isn’t a bad thing, really.

–It’s natural for a student to resemble their teacher somewhat.

Shibata: Narita’s still growing. When he leaves the LA Dojo, he’ll be his own man. In the meantime, if there are things he wants to steal, he’s welcome to steal them. 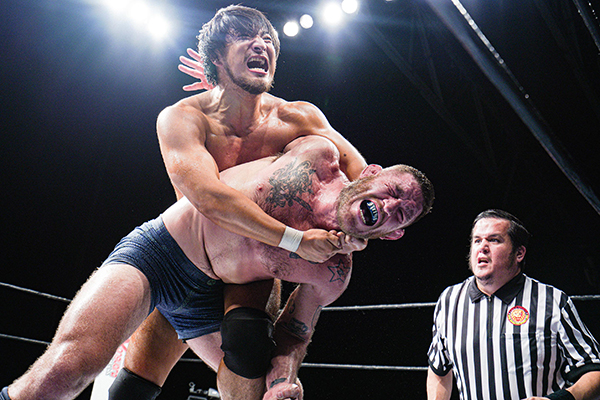 –He really stepped up when he challenged Tom Lawlor recently in Texas.

Shibata: Yeah. He just wasn’t quite ready for a title match at that point.

–But he has been much more fired up in the ring on STRONG lately.

Shibata: When we’ve called the STRONG matches together, Tanahashi said ‘if he keeps that level of emotion up, he’ll be huge’. But I think he needs to be a little more explosive.

–So he isn’t quite there yet.

Shibata: I think he needs a match, or an opponent that gives him that last piece of the puzzle. I don’t know who or when that would be, but he just needs that beast inside him to wake up.

–There are high hopes for him all over.

Shibata: Yeah. But I think he’s moving at the right pace, for him, right now. It’s hard for him, because he’s on his excursion right in front of all the fans on NJPW World every week. So it’ll be tough for him to make a big splash when he returns.

–You’re right, every one has an eye on his development.

Shibata: But it’s important to see the positives in that. He needs to see that as an opportunity, not a hurdle to him.

–It’ll be exciting to see both him and Uemura grow.

Shibata: Tanahashi talks about how pure Uemura is all the time. There’s no evil about him at all, it’s surreal almost. I think Uemura can be the sun while Narita is the moon. They’ll both shine, in their own way.

Uemura and Narita seem so much like Shibata and Tanahashi, 20 years ago 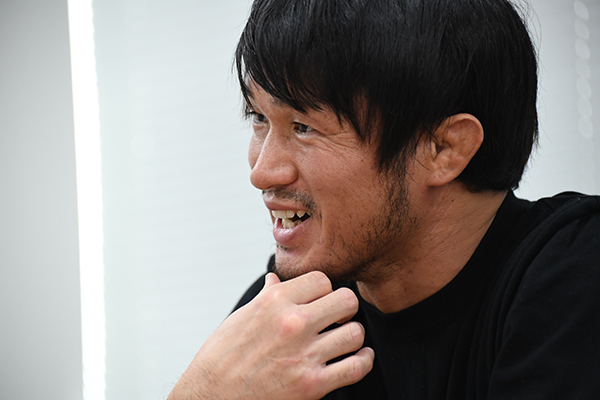 –Are there any challenges involved with looking after Uemura and Narita at the same time?

Shibata: That’s a leading question. What do you think might be difficult?

–Well, maybe their different personalities, and training them at the same time…

Shibata: Narita is younger, but he’s Uemura’s senior experience wise. So it really is the same situation as me and Tanahashi. They’re us, twenty years ago (laughs).

–It might be a ways off, but I think everybody’s excited for those two to get the final go sign from you to come back big in Japan.

Shibata: I think when they do go back, they’ll be completely different to anything we had before. Tanahashi and I have had the same conversation; NJPW wants something or someone to completely change the face and the direction of the company. I have my own ideas of what that could be, you saw that with Zack, and I’d like them to reinvent in their own ways.

–You want Shibata-ism to change the world?

–It certainly sounds like you have your hands full…

Shibata: As a coach, there’s no better situation. NJPW World means people are watching the whole time, so I really can’t slack off.

–And as for you personally, I’m sure the fans are excited to see what’s next.

Shibata: I hope the exhibition with Zack was me setting a good example for the Dojo boys. It sounds like it made waves all over the world, so with any luck it’s helped convince them they’re on the right path. 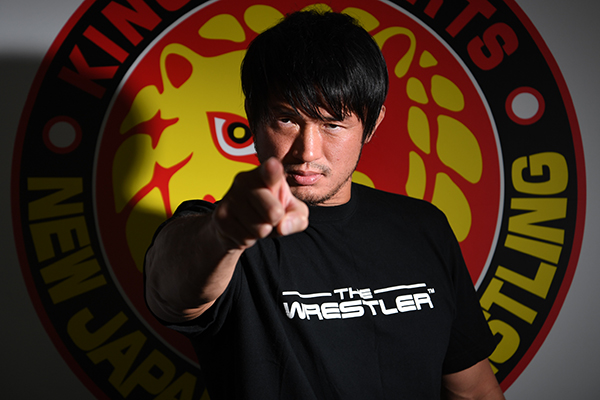