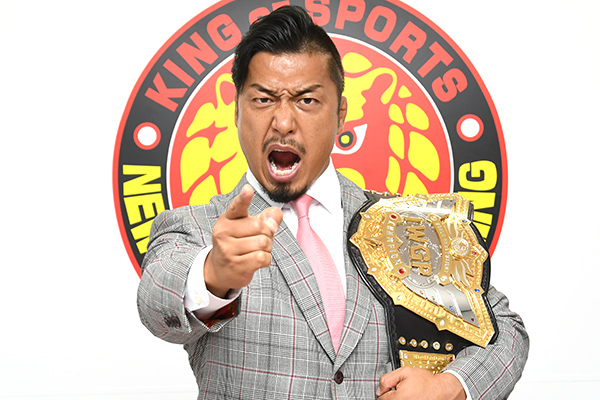 Shingo Takagi has been awarded Tokyo Sports’ prestigious MVP award for 2021, taking the prize for the first time in his career. The IWGP World Heavyweight Champion received the honour with a press conference in Tokyo December 13.

Tokyo Sport’s Pro-Wrestling editor Yusuke Okamoto stated of Takagi’s selection that Shingo was one of two names, together with Pro-Wrestling NOAH’s Keiji Muto that led the way in nominations. Takagi won his first award with 14 out of 19 votes for leading the way in NJPW as IWGP World Heavyweight Champion as well as having matches worthy of his champion status. 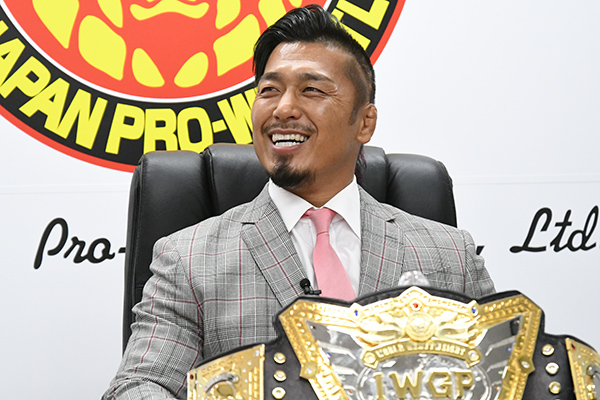 Accepting the award, Shingo stated: ‘Thank you for voting me as MVP. I don’t have the time here to really express how I feel, or how happy I am at the award, but to hear that the nominations were mainly for me and Keiji Muto, that shows that Yamanashi is churning out the best in Japan and the world, and that’s pretty cool in my book.

‘Looking back on the year, just like in 2020, we had to live with COVID, and the challenges that presents. We all as pro-wrestlers had to put everything we have into doing what we could. We were still performing in front of half capacity buildings, and the fans weren’t allowed to cheer. So it was up to us to express what they couldn’t. We had to bring that heat and energy, we had to create that emotional connection with the fans there, and of course watching at home. That’s what I was thinking in every single match.

‘This year I was chosen as MVP, but I don’t believe I did anything particularly different this year. It was business as usual, as far as I was concerned. Other people were saying ‘it should be Shingo’ but, y’know, this business is a lot like any other; sometimes luck and timing can make all the difference. Looking back, I guess that for all my talking about being fired up, this was the year that people bought into my conviction.’ 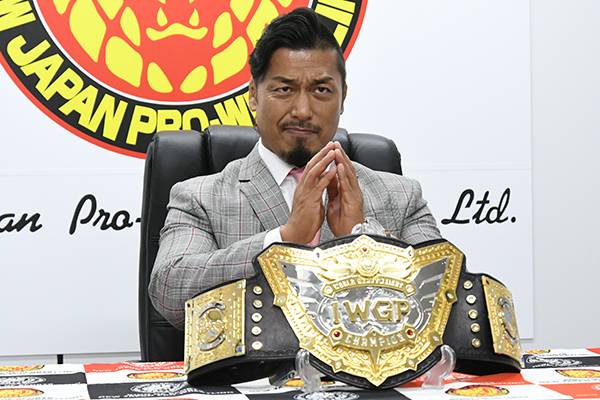 –What matches from this year stand out to you in particular?

Shingo: Even though it’s a match I lost, the NEVER match with Hiroshi Tanahashi in January…then March with Ospreay, the New Japan Cup final, and at Dontaku. I lost those matches, but even so, or perhaps because of that they became important matches to me. But I think what really stuck with me was in MetLife Dome with EVIL.

It was right in the middle of this COVID wave, and at the end of August, even I came down with it. I had to self isolate, couldn’t train properly, lost a ton of weight. For all what I just said about fate and timing, it couldn’t have been worse for me, but I just about made it back in time.  I was able to get to that main event, and I had people who had my back. I was worried, and I’m sure the fans were worried about me too, but I was able to make the main event and win. Maybe it’s a bit rich to say I stood in the ring with COVID and won, but it felt like I overcame a lot, and that’s why that match sticks with me.

–Over the last ten years, the MVP award has gone around NJPW’s top players, between Hiroshi Tanahashi, Kazuchika Okada and Tetsuya Naito. Now Shingo Takagi has been added to that list.

Shingo: Okada, Tanahashi, Naito and now me. Hmm. I haven’t been chosen in Tokyo Sports’ awards since 2008, when I won the technique award. Maybe I was in the running after that, and my name was in those meetings, but I never got picked. So I kinda figured that my turn would never come around, and it was better not to think about it. Really I just wanted to do what I could and not think about something out of my control. What was in my control was getting to that top mix with Okada, Tanahashi, Naito, Ibushi. I guess, now I’m 39… I just managed to get there in time. Now I have been chosen as MVP, it’s a sign I managed to get in that mix.

Shingo: Well, I love wrestling, and I have a lot of respect for it. I don’t want anyone to look down on the business. Genichiro Tenryu used to talk about how it’s important for wrestling to convey pain and effort, and that’s what makes more people respect wrestling in turn. That’s how I wrestle every time, and I really want to have fans say that my matches are the model of what professional wrestling should be. 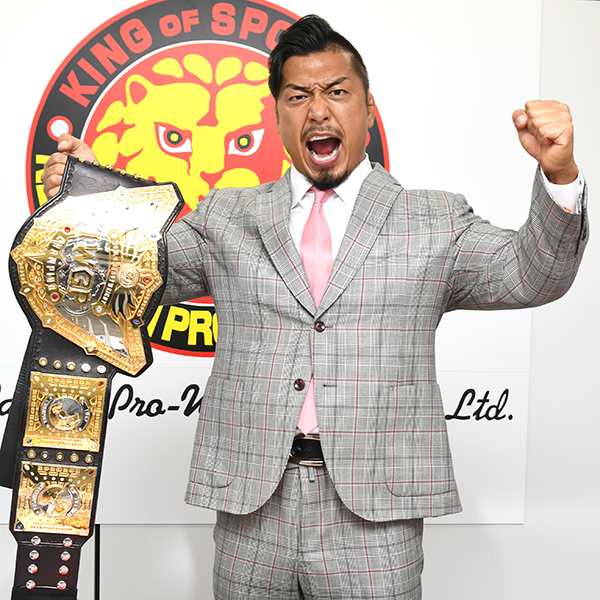 –You have the January 4 main event against Kazuchika Okada set. Can you speak to your plans for the rest of 2022?

Shingo: Well, in 2021, I came this far, won the IWGP World Heavyweight Championship and took the MVP. Those are pretty big achievements, but I think that 2022 is the year where you’ll really see the evolution of Shingo Takagi. January 4 & 5 2022, those main events will be the turning point. Can I come out on top or not? I think those events will really shape my wrestling career as I go into my 40s, my 50s, or however much longer I keep doing this.

–Obviously you feel you have to win.

Shingo: Of course. Whatever it takes, I want to stay on top. I think there’s been a lot made about this whole belt thing, but in the end, not just for NJPW, but for the whole business, I have to stay on top.

Shingo: Like I said before, I won the world title, and I was chosen to be Tokyo Sports MVP. But I don’t consider myself right at the top of this business, yet. In 2022, I plan to weather the storm of January 4 & 5, and like a dragon roar to the top of the wrestling world. Thanks in advance for the support. That’s all I’ve got to say. 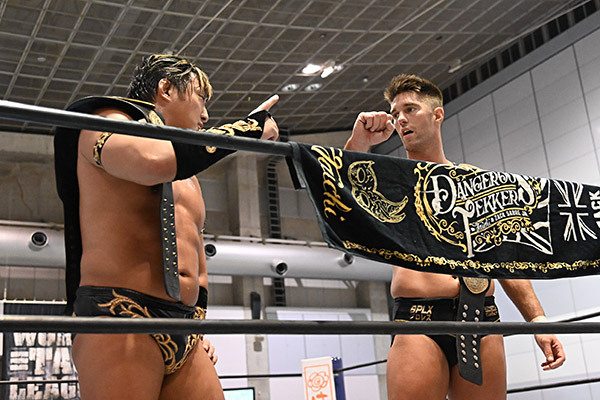 Dangerous Tekkers were also granted the publication’s Tag Team of the Year award, also for the first time. ‘About bloody time!’ was Zack Sabre Jr.’s comment on the prize, with Taichi stating ‘After the miscarriage of justice that was last year’s pick, this was the only natural result. Nobody has carried tag team wrestling like we have over the last several years. I’m relieved we’ve put an end to the humiliation of having the last NJPW team to win this prize being Manabu Nakanishi and Strongman. Okamoto- hand over the prize money now.’ 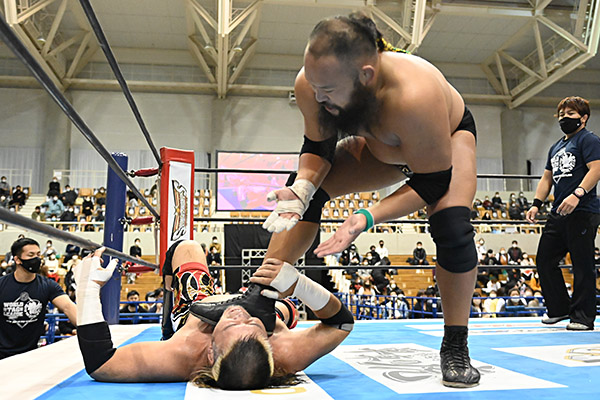 Meanwhile Great-O-Khan took the Technique award, stating ‘Technique, not the MVP? We cannot tell whether Tokyo Sports are discerning experts or a meaningless rag. They certainly seem happy to speak out of both sides of their mouths. Well, we shall take all the awards next year. For now we shall accept this ‘Technique Award”