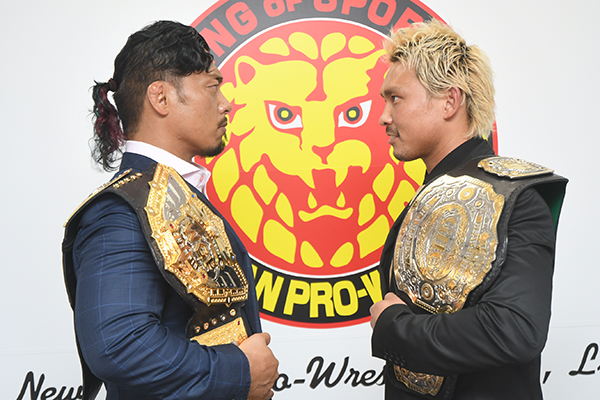 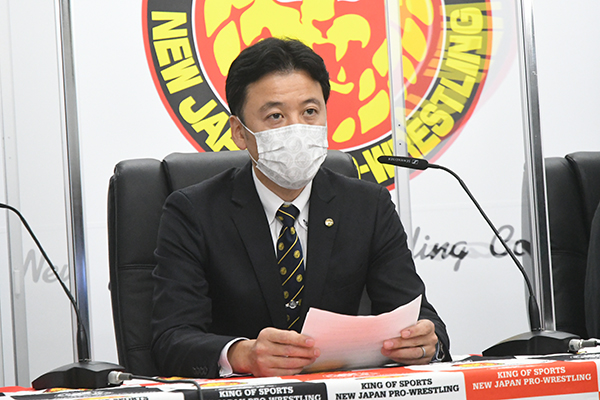 ‘Thank you for watching today. Yesterday, we announced the cards for January 4 & 5, Wrestle Kingdom 16 in Tokyo Dome, the two events that will kick off our 50th anniversary year. Today, we will announce the full card for January 8.

‘At our previous press conference last month, there were questions about whether NOAH and NJPW would be teaming with one another, or be in direct competition. We can now say that every match will be New Japan competing against Pro-Wrestling NOAH. NJPW’s wrestlers will be carrying the expectations of all our fans around the world, and I expect our wrestlers to show why they are the very best. Please enjoy the action on January 4, 5 and 8.’

The full card was then revealed, as detailed here. 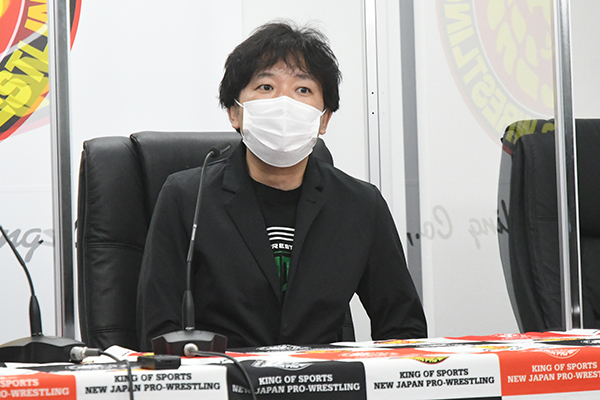 The Executive Director of NOAH’s parent company Cyberfight, Narihiro Takeda then addressed the conference, stating ‘NOAH are prepared to march into war with NJPW, and our wrestlers are absolutely ready. I truly believe this will show the power of professional wrestling.’

There followed an opportunity for representative wrestlers from both companies to address the audience. As IWGP World Heavyweight Champion, Shingo Takagi represented NJPW, while GHC Heavyweight Champion Katsuhiko Nakajima spoke on behalf of NOAH. First to speak, Takagi would state: 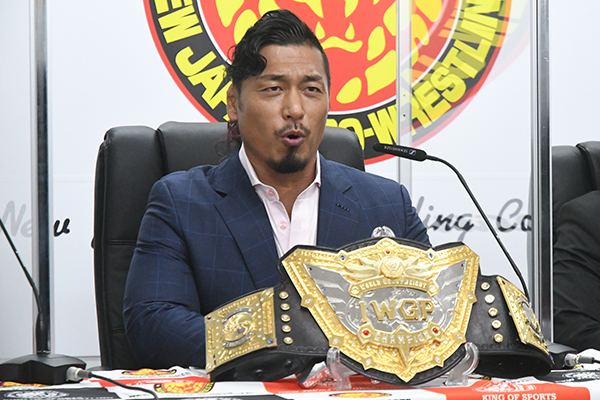 ‘Hello everyone, 2021 Tokyo Sports MVP and current IWGP World Heavyweight Champion Shingo Takagi here. I’ll be honest, January 8 hasn’t exactly been at the front of my mind. I’m completely focused on January 4 and 5, but now that the card is officially announced, and seeing what’s on offer, I have to say… This is a big plus for NOAH perhaps, but for New Japan, I’m not so sure. I asked the press to do some digging, about who draws people. We took data from our five biggest events this year, Tokyo Dome and MetLife in there, and to match what we did on those five, they would need to run 80 of their cards. So with that in mind, just numbers wise, there isn’t much in it for us. 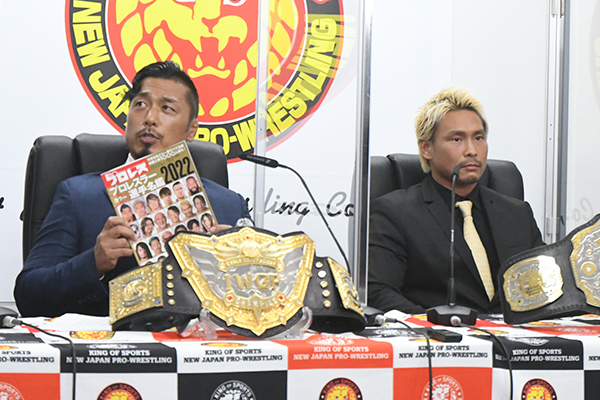 For NOAH, this is a great deal. They get to swing with us, maybe win big. But if we were to take all the NOAH fans and add them to New Japan, it would be like going from a ten to maybe, maybe 10.5 at best.  But for me personally, I always like new motivation. I crave it. And this card… Kongo, hey? Ten man tag. I was just looking at the Weekly Pro-Wrestling Wrestler Directory and came across you guys. A name like ‘Diamonds’ you expect flash and class, but don’t judge a book by the title I guess. You pose like geeks, HAOH and NIOH look like they’d rather be anywhere else. Tadasuke, I know that guy. You’ve got him in his little dorky jacket and sunglasses and everything. You look all wrong stood like that, what a joke.

But still, as opponents. We debuted at the same time, we’ve fought before, Katsuhiko Nakajima. You’re the GHC Heavyweight Champion, huh. And you’ve beaten me. Good ol’ Katty. I can call you Katty, right? I’m definitely hyped to get my hands on you. We’ve had singles matches before, too. January 8, Yokohama Arena. Is this one and done, or does it become something more? I think this match will be a pretty good indication of what’ll happen next. That’s all I’ve got to say about that.’ 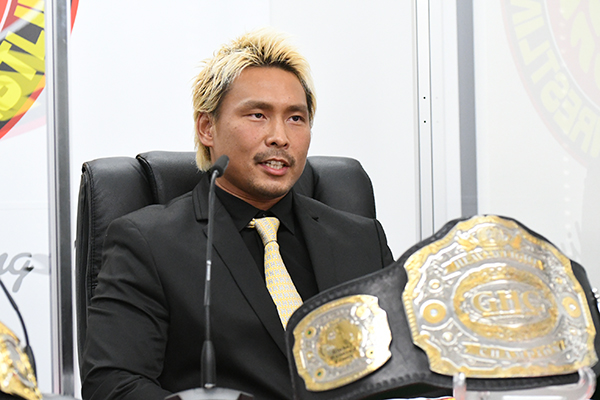 In response, Nakajima fired back:

‘I am the GHC Heavyweight Champion Katsuhiko Nakajima. On January 8, in Yokohama Arena I look forward to experiencing the “industry leader”… The “industry leader” New Japan Pro-Wrestling, and having it all belong to… NOAH? No, to Kongo… No, to me. Get ready.’

–Mr. Nakajima, your response to Takagi’s statement that there is no benefit to NJPW in this situation?

Nakajima: Well, you’re welcome to stay home then. Obviously NJPW thought there would be some benefit in facing a hot, rising NOAH or this whole thing wouldn’t have happened. NJPW is the “industry leader”. But perhaps the non leader NOAH has something the “leader” doesn’t hmm? 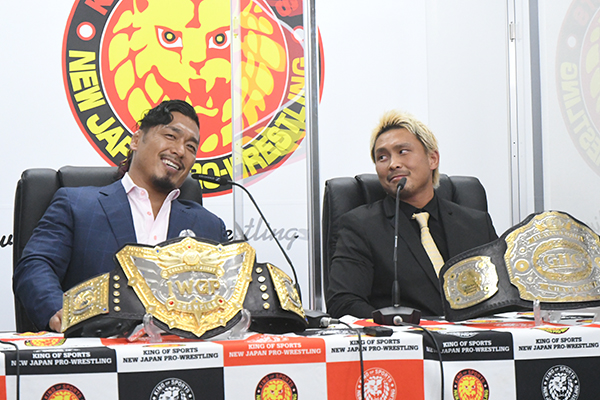 –Mr. Takagi, you have wrestled Nakajima in the past in losing efforts. How do you feel about facing him in particular?

Takagi: Hey, hey, hey! Watch what you’re saying here! Yeah, I faced him twice and I lost both times.  Are you trying to piss me off? Well, it’s all out there for you to look up and find out anyway. Look, Katty Nakajima over here said it himself, we are the industry leader. I wasn’t expecting that from him. But look, it isn’t about industry, not about the size of the company. The point is that our wrestlers are on a different level. With Kongo, it looks like you guys wear a lot of red, maybe we could make that a stip. Lose and you can’t use red, how about that. What was the question?

–About facing Nakajima, and your feelings about this match.

Takagi: Right. Well, I think this match will show everyone whether this ends in a one match deal, or whether it’s the start of something bigger. You know, I just so happen to have this directory magazine here, and it has all our stats in there and everything. You know, I’m a former GHC Junior Heavyweight Tag Team Champion? Wild, right, never wrestled in NOAH, and still a GHC champion. But having that listed there, it makes it look as if I wrestled in NOAH for ages and only ever got some junior tag belt. I would be lying if I said I wasn’t a little interested in that GHC Heavyweight title. 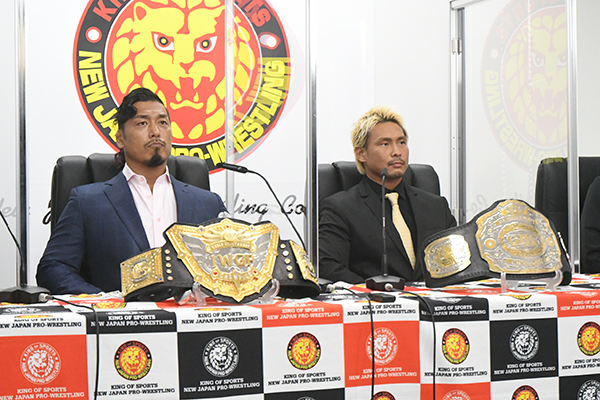 –What are your thoughts on Nakajima’s accomplishments in NOAH?

Takagi: I’m a wrestling fan. When I get a chance I watch what I can. He hits hard. He conveys the pain of this business. He’s violent. We both debuted in the same year; that’s not to say we came up completely the same or anything, but I think we have a fair bit in common when it comes to what we think about pro-wrestling. When we wrestled before, Katty’s kicks hurt like hell. That was ten years ago, but I still remember, and I’ve got some receipts coming.

–Mr. Nakajima, does Takagi have particular significance to you having debuted in the same year?

–How about Takagi’s suggestion of having the colour red as a stipulation for this match?

Nakajima: Sounds stupid. I think the fans coming to see this match want something better than that.

–This is a ten man tag match, but are there any other members of the opposite team that interest you?

Nakajima: Well, looking across the whole card it looks like there are a lot of factions against one another, and that’s motivating. But with Takagi, we did debut at the same time, he is a heavyweight champion. So it would be stupid to say I’m not at least aware of Takagi. How’s it going to go down?

He’s been sitting there talking about what we’ve done in the past. Today was the first time I’ve met him in a while. And I don’t feel anything intimidating about him at all. On the day, who knows? We’ll find out. I look forward to it.

–Have you watched any of his recent matches?

–Mr. Takagi, you will be in the main event on January 4. Your thoughts on where this match should be on the card January 8?

Takagi: Obviously the champions should be in the main event. Katty Nakajima has a title match on January 1. I’ll have title matches on January 4 and 5. We’re both here in this press conference right now. Not to head to January 8 as champion would be pitiful. He was just saying he didn’t feel intimidated? I’m the IWGP World Heavyweight Champion, and whether it was luck, fate, timing or skill, I am the 2021 MVP. If you aren’t intimidated by me, then it’s my responsibility to make you fear Shingo Takagi on January 8 in Yokohama, Katty. 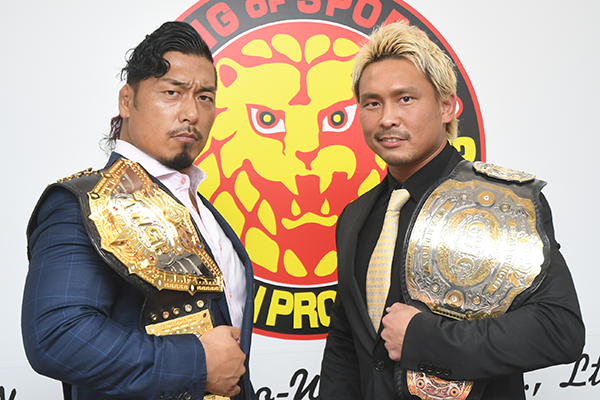