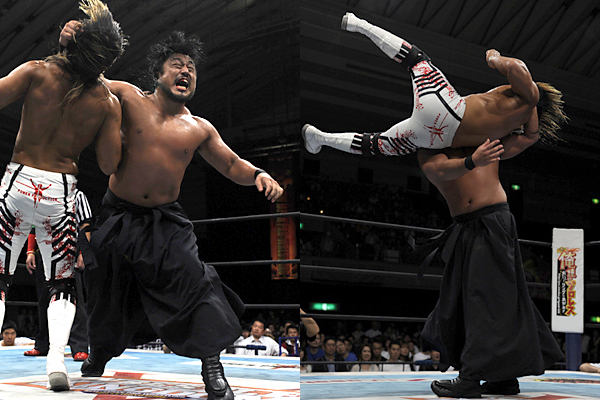 –Last time we talked about the American tour in May 2011. You headed back to Japan, right in time for Osaka June 18, facing Hirooki Goto for your fifth defence. Up to that point, your personal best was V4.

Tanahashi: With Goto I was always so fixated on the November 2007 match we had, and how good that was. After that, I felt we couldn’t top it no matter how much we tried. It was frustrating for a while, but I think we finally beat that match here.

–Goto came up with his new move, the reverse Shoten for this match, and pressured you hard but couldn’t quite get the win.

Tanahashi: That match was definitely about the four years of experience we’d both had, and how much we could withstand one another’s offence.

–After you won with the High Fly Flow, you had a runin with Giant Bernard, who with Karl Anderson was double GHC and IWGP Tag Team Champion. Bernard challenged you for the IWGP Heavyweight and in return you demanded a tag title shot, taking Goto as your partner at the fans’ behest.

Tanahashi: I don’t think the fans in the building have chosen an IWGP Tag team Championship team before, heh. I think Goto was most surprised by the reaction, but it really changed the mood for him from disappointment to this positive energy. 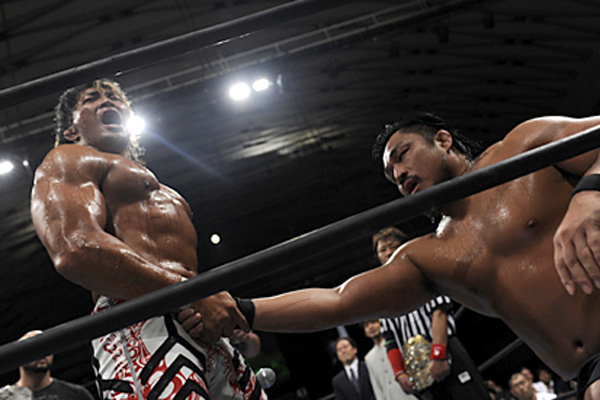 –You had that tag title match on July 3 in Korakuen, but Goto would take a Gunstun from Anderson to move Bad Intentions to their ninth defence.

Tanahashi: We had a lot of steam going into the match, but those two guys were just too much. great singles wrestlers, and even tougher together.

–You then faced Bernard in July in Makomanai, the same opponent in the same venue where five years earlier you won the title for the first time.

Tanahashi: A special opponent in a special venue. And for Bernard too, he’d been in NJPW for five years at this point, all in the top flight mix. Quite a while.

–In the end, Bad Intentions would break up, and Bernard left Japan in February 2012, after being in the top flight for six years.

Tanahashi: He was there in the good times and the bad, always declaring ‘New Japan Ichiban!’. Having a big foreign heel going after a Japanese guy is something that’s ingrained in Japanese wrestling. With him, and Scott Norton before him, I really learned how to wrestle smart, how to use my head and draw from the crowd. 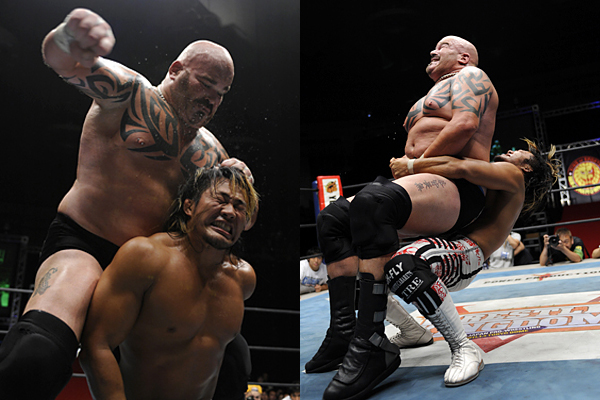 –In a rare finish for you, you used the Straightjacket German to just gleam a win.

Tanahashi: He’d kicked out of the High Fly Flow, so it was a case of how can I beat him now? I tried a German suplex and he kicked out of that, so the next step was a Dragon, and when he broke my grip, then the Straightjacket. He already had this huge waist, and then you have his arms on top with that move, so it was a really tough one to hit. You can’t break your clutch in that scenario at all.

–Do you have a particular grip?

Tanahashi: A lot of wrestlers use that hooked finger butcher’s grip. Me, I loop my index fingers and thumbs. Then I put my little fingers in those loops and bring my hands together. I think I’m the only one that does this, heh.

Tanahashi: I’m sure somebody had taught me at one point, but I never passed it on, and it kinda stopped with me, I think. I’ve honestly forgotten where I picked it up to be honest. Maybe I should teach it to the Young Lions, and call it the ‘Tanahashi Grip”(laughs).

–Immortalise yourself even more, why not.

Tanahashi: It’s a great grip. Suplexes aren’t just about the throw, you need a good tight pin on top. I use the same grip on my headlock as well.

–After this match, Bernard left and then rejoined you in the ring. He called out ‘Tanahashi ichiban!’ and you embraced in the ring. 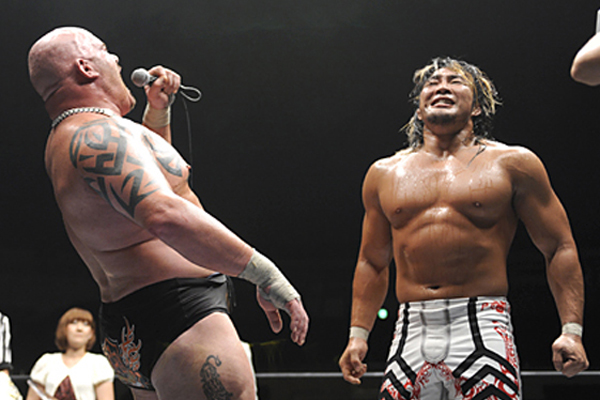 Tanahashi: Yeah, he’s a special opponent for sure. That was a really emotional, memorable match. Plus there were more people than five years earlier, which was great.

Tanahashi: It was steadily building up and peaking. I remember in 2006, the ringside area being four rows deep, then next time we were there it was five. You notice that kind of thing running around the building to warm up. When I started as a Young Lion I’d barely have any space at all to move, and then it really started to decrease. Here all that work in promotion was starting to pay off.