Okada speaks to the press after Sapporo defencethe

February 21 saw Kazuchika Okada greet the press and the viewing public after his successful defence of the IWGP World Heavyweight Championship in Sapporo. Set for an Anniversary Event match that will see him tag with Hiroshi Tanahashi and Tatsumi Fujinami against Minoru Suzuki, Zack Sabre Jr. and Yoshiaki Fujiwara before his New Japan Cup campaign gets started opposite El Desperado, Okada had much to speak about. 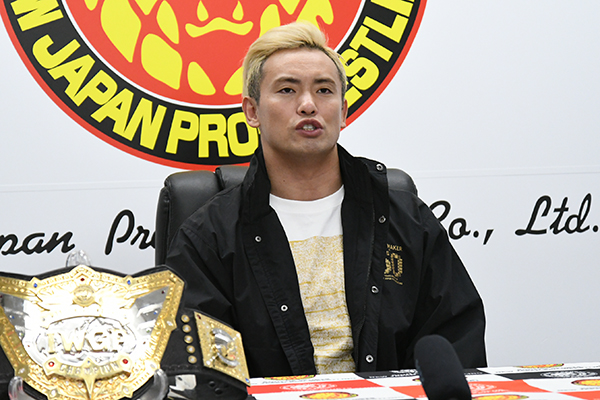 ‘Yesterday was absolutely a match that was fitting for the 50th Anniversary, and I was able to win that match and defend the championship. But the 50th Anniversary year has only just begun, and I plan to continue bringing the excitement against all sorts of opponents in the months to come. Don’t take your eyes off Kazuchika Okada or NJPW.’

–On the Anniversary Event card, it’s been announced that you will be teaming with Tatsumi Fujinami for the very first time. Your thoughts?

Okada: I really wanted to either team with or face a wrestler from our past, and this is definitely a great team. Between the three of us, there’s a real generation gap, but you’re seeing the history of NJPW in one team, and I think not just me but the fans will get to experience the history and legacy of New Japan. I’m excited.

–You have Yoshiaki Fuijiwara opposite you.

Okada: I’ve actually tangled with Fujiwara before. On an event (Masahiro) Chono promoted, I was in a battle royal with him, but this is definitely the first time in a while. These are definitely three technical masters. Maybe I should be working on my Dragon Screws so I can keep pace with Fujinami and Tanahashi.

–In the New Japan Cup, as you suggested, you will be facing El Desperado in the first round.

Okada: Thank you New Japan (laughs). It’s gotten to be a tradition to have these champion versus champion matches at Anniversary, and I wanted that again this year. This year with the New Japan Cup having champions and juniors in there… It’s been a while since I’ve gotten to face a junior champion, and out of all the wrestlers around right now, El Desperado has impressed me. I’d like to experience that, and experience the will of a junior champion. At the same time I’m excited to teach Desperado just what it means to compete as a heavyweight wrestler, and hopefully he’ll pick up a thing or to and continue to develop.

I think Desperado really is an impressive wrestler, so perhaps if he gets to wrestle me, he’ll be able to improve even more. As for the tournament itself, I plan to show just how dominant a champion I am and to win the whole thing.

–Before the winner of the New Japan Cup has challenged the champion. What might you do should you win? What motivates you in this tournament?

Okada: I think the motivation is to win the tournament as champion, in itself. Have the fans know how amazing Okada is, how I am the face of this anniversary year. After that, I have a lot of ideas, and opponents I want to face. There are guys in New Japan pro-Wrestling that I haven’t wrestled for a while, and that might even include junior heavyweights. The motivation for me is to prove that NJPW is a cut above, and I want to present matches that have the fans excited. 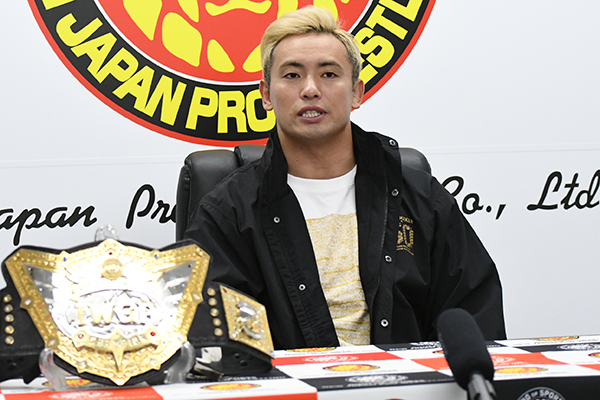 –Kota Ibushi returns at Anniversary. After what happened at the G1 final, how do you feel?

Okada: I hope he does well. Just because he’s back, that doesn’t mean he gets a shot at me right away. He has to earn that spot, and make a claim for a rematch. I definitely want to face him, but he has to get to that point. So I’m waiting, and I’ll keep this belt ready for when he tries to take it from me. Good luck- that’s all I can say.

–If he wanted a shot in the immediate future, one might say he needs to win the New Japan Cup.

Okada: Well, he isn’t doing that. The level NJPW operates at, you can’t come back and win this tournament that quick and that easy. There’s a lot of stiff competition there.

–Finally, a lot of talk overseas has been around what is happening within BULLET CLUB at present, even about a potential dissolution. Do you have any thoughts?

Okada: (laughs) I really don’t know. It doesn’t really have anything to do with me. But I’ll give you a proper official comment: “I have nothing particular to say on the matter”.