–So last time we talked about what happened at All Together on August 27. You would then head to Mexico and CMLL into mid September, before returning September 19 in Kobe and defending the IWGP title against G1 winner Shinsuke Nakamura.

Tanahashi: It was quite the schedule. Over in Mexico, foreigners are typically rudos, but I was there doing events and being in the champion role. Then, when I came back I didn’t have any of the off time the other wrestlers usually get after the G1. ‘Never tired’ indeed.

–That’s Hiroshi Tanahashi all over.

Tanahashi: The first time I said that I’d never been tired in my life was after that Kazuchika Okada challenge January 4 2012. Bugt I backed it up. In ’11, I was doing defences every month, and going abroad to wrestle in my off time.

–This match with Nakamura was an attempt at revenge for Shinsuke from a failed May challenge, but one that saw your seventh defence after a High Fly Flow to the back and then a roll-up, a rare move.

Tanahashi: Well, it was the second time to wrestle Nakamura in a short span, and I always want to do something different with him, so that came out, a little something I kinda cooked up in Mexico. It made sense, from the back, you don’t know when that high Fly Flow impact is coming, and the follow-up pin is hard to counter. 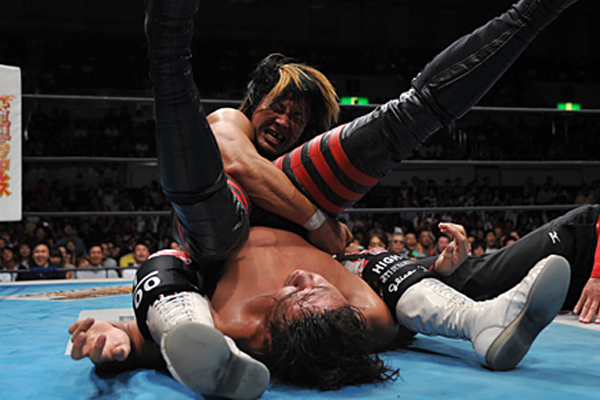 –So you had a plan ready.

Tanahashi: Right. I was only in Mexico for a couple of weeks, but I wanted to come back with something that made the trip worthwhile. Come to think of it, that match was the one and only time I used that ‘High Fly F-roll’, heh. Maybe I should dig that up sometime.

–Didn’t you break a tooth in this match?

Tanahashi: You know, it was right near the start, off a knee from Nakamura. Blasted right out of my mouth. And referee (Red Shoes) Unno found it and pocketed it! Then when I got to the back he was like ‘here you go,’ and handed it to me! Coming backstage after your match and being presented with your own tooth- not too many jobs where that happens (laughs).

–Your eighth defence was October 10 in Ryogoku. This was your 12th career anniversary, and your opponent, Tetsuya Naito was there at age 17, watching the match in Korakuen Hall. 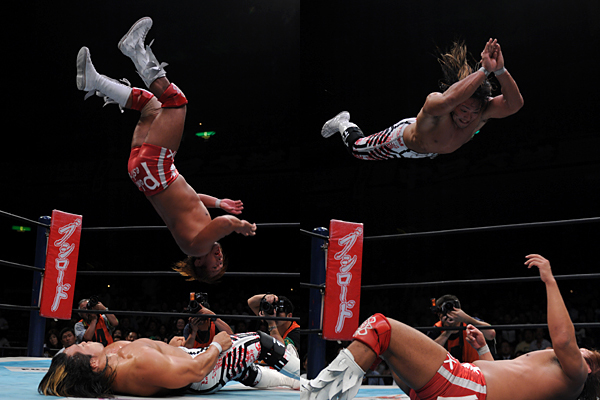 Tanahashi: All those story puzzle pieces lined up. At that point, Naito was still in his 20s, and shaping up to be hontai’s next ace. Me included- it really seemed at the time like ‘after Tanahashi comes Naito’. I think we had a match that showed that, but the house we had said the crowd took a harsher eye.

–It was quite a way off a sellout. Back then, Ryogoku shows that didn’t have the strong branding that G1 does would struggle somewhat. Naito would later rue that he was unable to convince anybody who wasn’t already a big Naito fan.

Tanahashi: Tanahashi vs Naito wasn’t a sellout drawing main event at that point. But Naito brought a ton of fire, and not just during the match itself. In the match, his palm strikes, man. I’ve always heard mine are stiff, but his are that much tougher. It make sense I guess, guys with a baseball background…

–Toward the end of the match, he landed the Stardust Press, but after damage done to the knees earlier in the match, couldn’t follow through with a cover fast enough. You were the first person to kick out of the move.

Tanahashi: Ah, that’s right. Then after I won with the High Fly Flow, we were both laid out, with our arms round each other’s shoulders. So romantic, thinking back on it (laughs). 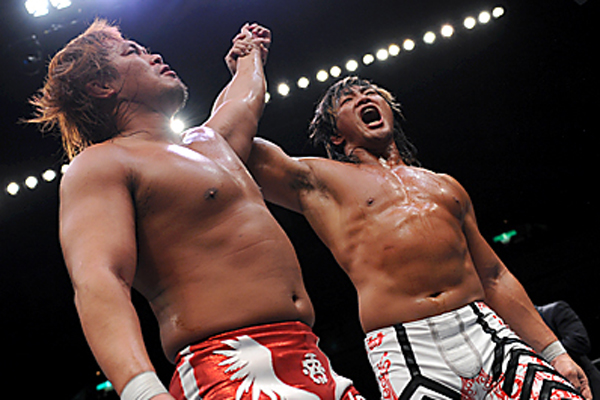 –Naito had kind of idolized you as a fan and coming up in the business- how did that make you feel?

Tanahashi: Hmm, thing was, he had a better body than most other Young Lions from day one, and he had a head for the business right away. I kind of think he could’ve set his sights a little higher (laughs). Come on, it’s not often you get humility out of me! But legit, I really did think he would shoot past me at this point. In the end, he had a lot of ups and downs, especially after Okada came back. But that only gave the fans more empathy when it came to him, and in the long run, they related to Naito more than if he had a smooth climb to the top.

Tanahashi: Okada got booed when he challenged me, but turned that around within a couple of months. Naito was booed for what? Two years? And me? Four! You can’t beat me when it comes to being a pariah! Wait, what was I competing about again? (laughs)