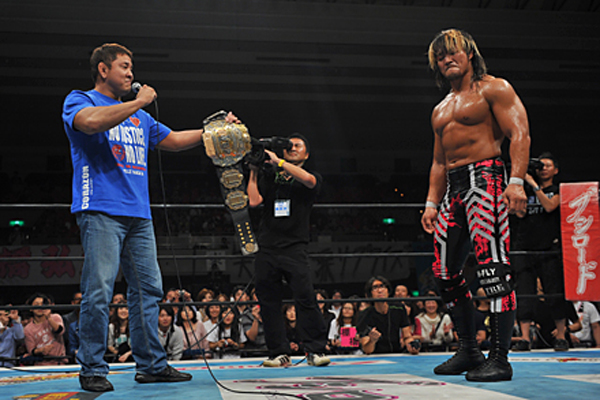 –When we left off last time, we were talking about you defeating Toru Yano via Texas Cloverleaf to defend the IWGP Heavyweight Championship for the ninth time. Yuji Nagata was quick to challenge afterward.

Tanahashi: I’d defended the title against him in April, but he beat me in the G1. More important, he held that V10 record, so it made a lot of sense that he would be challenging.

–That match happened December 4 in Aichi, and saw you finally pull level with Nagata.

Tanahashi: Years later, it would be me in that spot. (Kazuchika) Okada was honing in on V12, so I felt that I was the only one who could stop him. Nagata definitely felt the same way, and he was giving all he had.

–The finish to that match was memorable, with headbutts leading to a High Fly Flow complete with a 90 degree rotation.

Tanahashi: Every single aspect of his game, his throws, his strikes, his ground game was just so tough. It was always rough, going against Nagata (laughs). In the end, heart was all I had to go on.

–As the matches with Nagata piled up, you were able to get more and more success; did your thoughts of him change as you picked up those wins?

Tanahashi: Not really! I think those matches when I was younger just set these deep rooted thoughts, that whatever I did to Nagata he would just repel completely. I think that Nagata really represented the last of that old guard in NJPW, and what I was doing brought in this more new school approach.

–This was Nagata’s last IWGP Heavyweight challenge to date.

Tanahashi: I guess in a lot of ways, this was quite a turning point in NJPW history. It was really emotional to hit that V10 mark, just to have come so, so far.

–With this match putting the punctuation point on your 2011, you were voted Tokyo Sports’ MVP.

Tanahashi: It was ten years ago, but I’m still knd of impressed I even got through that year. I defended the title every month, and did so much extra media and promotion as well. Ever since that year, I became a bit of a ‘short sleeper’.

–You’re so busy you don’t sleep much?

Tanahashi: Right, I sleep about three or four hours every day. When I was a student, I could sleep in until noon, but now, my body is just so used to not sleeping much. I feel like if I sleep for six hours, that’s too much.

–And you made the most of that time. It’s worth noting that with you in 2011, you started a streak of NJPW winning the MVP award every year, up until the current day. It felt like NJPW was finally out of the dark ages.

Tanahashi: It’s easy to get emotional about 2011. You had the big earthquake as well, and I was determined to bring the world something through pro-wrestling. This was the hardest I worked in my career, but I think it was key in bringing NJPW into the boom period that was coming.

Tanahashi: I think in all ways, physically as well, this was me at my absolute peak.

–About the same age Kazuchika Okada is in 2022…

Tanahashi: Right; and look at the run he’s having this year. Okada burst onto the scene really quickly, but he’s just now at his very best. 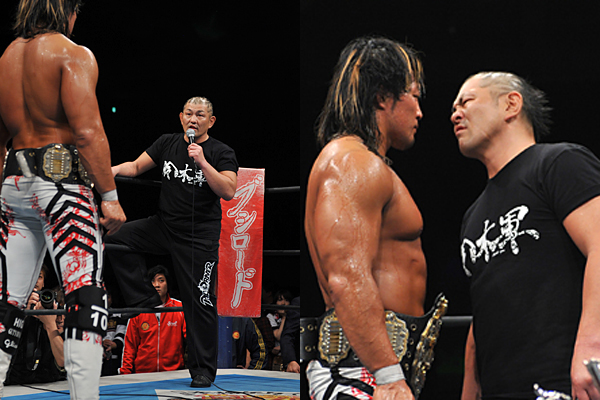 –After your match with  Nagata, you were confronted by Minoru Suzuki. After primarily wrestling in AJPW from 2005, Suzuki headed back to New Japan in the spring of 2011, and formed Suzuki-Gun in May.

Tanahashi: He chose his spot at the 40th Anniversary Dome show, heh. In the early 2000s, when I was a lot younger, he beat the crap out of me. I think me and Nakamura getting the belts off of them in Osaka back then was a very rare win for me over him.

–December 2004, you and Shinsuke Nakamura beat Suzuki and Yoshihiro Takayama, after you pinned Suzuki with a Dragon Suplex.

Tanahashi: Even so, he had 90 percent of that match, and we just squeezed out the win. I think back then it was a case of these invading forces running roughshod over NJPW, and with Suzuki coming for me here, I wanted to show him that this was a different NJPW to back then.

–What did you think of those early years of Suzuki-Gun?

Tanahashi: It started out really small, with TAKA Michinoku and Taichi- and this was a long time before Taichi stood out the way he does now. But Suzuki has this kind of gravitational force to him. He was able to bring the right members to his side, bring more appeal to that group. I think being a freelancer like he is really helped both him and the group; he was able to bring in more wrestlers and fans from all these different places.

–Heading into this Dome match, Suzuki explained that he had been taught by ‘the demon of the Showa era’ in Kotetsu Yamamoto, and ‘the god of professional wrestling’ in Karl Gotch, before taunting that ‘you can’t hide from Strong Style!’ What did you think of the mind games Suzuki played heading into this match?

Tanahashi: Hmm. They say the devil’s in the details, right? I think you can count on the fingers of one hand the number of people who think more about the little things than Suzuki. He doesn’t hold back in any area of anything he does. When you think about it, him being in all those different promotions really made him into a bigger professional than I or anyone could hope to be. 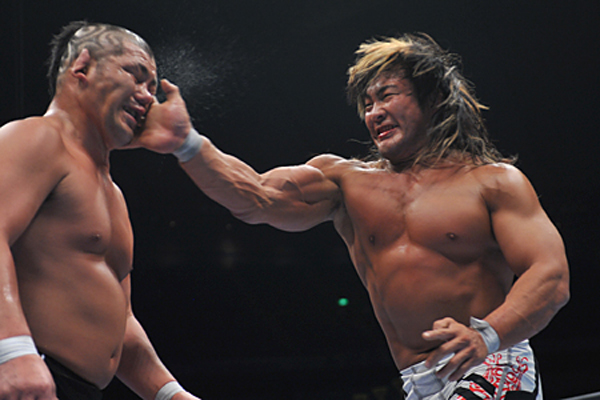 –It was a hard hitting match, absolutely. You didn’t back down an inch from Suzuki and his strikes before the final High Fly Flow.

Tanahashi: It was this stubbornness, I think. Suzuki had more an air of an outsider than he does now, so the match was about me carrying NJPW and protecting it from this invader. Plus the V11 record was a big factor, too.

Tanahashi: Happy and anxious at the same time! Like ‘great! But am I really the right guy here?’ (laughs). I know I present this really confident exterior, but I can be pretty insecure a lot of times. I’m not bad of an athlete, but I’m nowhere near the level of Okada or Ibushi. But perhaps that’s why I got to the point I did, and had the emotional investment that fans put in me. Whenever people put expectations on you, it’s not enough to meet them, but you have to blow them away, so I think in the end, getting to V11 only made me stronger still. 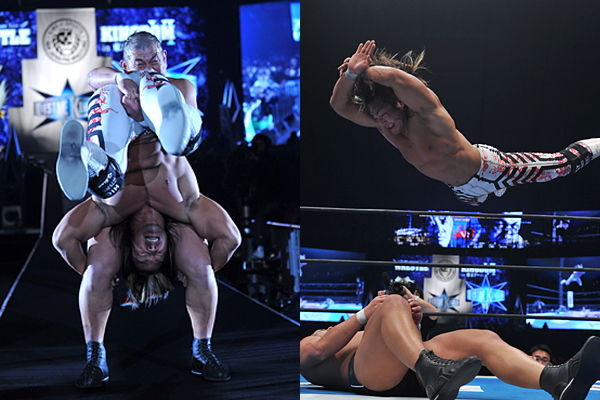