Strong words and near brawls in B block Best of the Super Jr. pledges 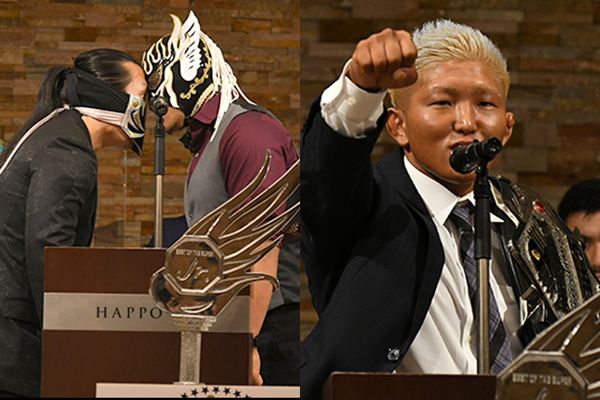 May 13 saw the Best of the Super Jr. 29 press conference, as all twenty entrants gave their pre-tournament thoughts to assembled media and fans around the world.

Watch ALL of Best of the Super Jr. 29 live and in English on NJPW World!

B Block were second to take the podium, headed up by Master Wato. 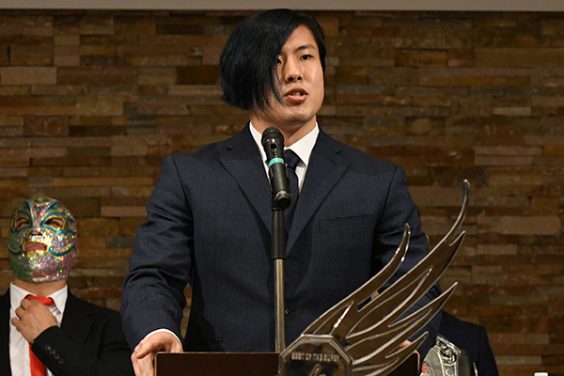 I’m so happy for BOSJ to be back to two blocks, and to have four new wrestlers here who I’ve never faced in singles matches. I’m excited to face them, and to win. To the former champion El Desperado, and in A block the current champ Taiji Ishimori and Hiromu Takahashi, I want to say stay out of my way. I will win Best of the Super Junior! 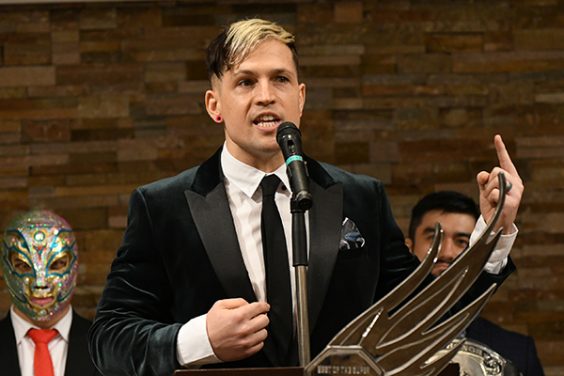 Last year, I said it would be third time lucky, but I missed out. Now this is my fourth consecutive BOSJ. There are three men in this I haven’t beaten before. Wheeler Yuta, El Lindaman and TJP. So as far as I’m concerned I know i can beat the other six. So I just have to beat those three in this torunament, and they’ll find out that one way or another, they all surrender to the Sniper. 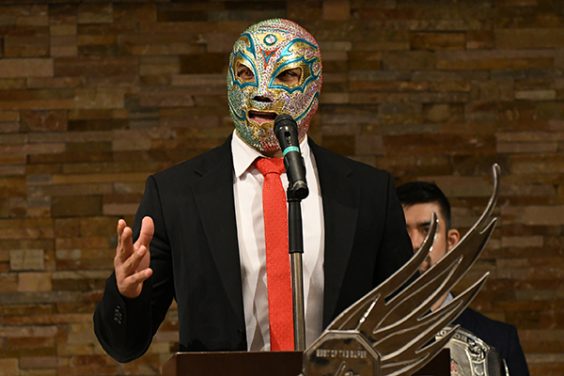 It is my honour to be in this most prestigious of tournaments. I’ve been doing every bit of preparation I can and amassing every bit of experience that I can to bring with me into this BOSJ. I’m more fired up than ever for this, my 14th appearance in Japan, a home away from home for me. It is my mission here to win, to fight with all I have and leave a mark in the fans’ hearts that has them feeling they need Titan here. Thank you to New Japan, officials, the Chairman, the media and fans. 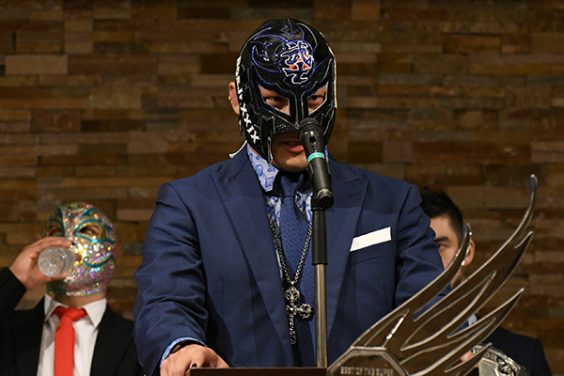 Of course I’m in this to win it, but I’m also here to finish some business with a few in this block. I’m excited to face the first timers, but this is my 15th career anniversary, and I’ll put everything together to win this thing. 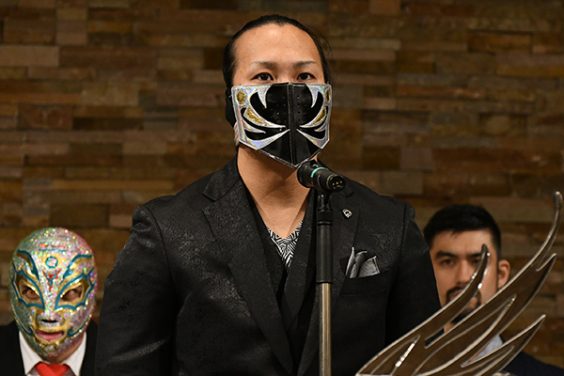 BOSJ is a special tournament to me. I made my NJPW debut in this tournament, and now you look at this lineup, this collection of people- there’s nothing like it in the world. This a huge chance for me to turn heads, and create new lasting impressions of who I am. When I wrestled Jun Kasai and Tomoaki Honma at TakaTaichi Mania, it reminded me that I can do the kinds of matches that you guys couldn’t hope to. You lit a fire in me, got the adrenaline going, and made sure that I will be the star in this thing. 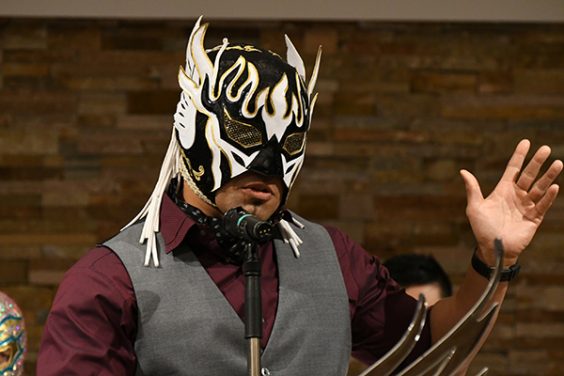 Everyone’s saying this, but I will too. 20 guys, two blocks, a real BOSJ the way it should be. That’s great. There are singles champions here, and one who has a defence even while the tour is running. Not many guys as crazy as that. It’s fun to have him here, TJP, Phantasmo, Yuta, these international wrestlers. Fun, yeah. Motivating.

Now, what was it that guy said? Me, Ishimori and Hiromu, stay out of it… “I’ll win this”. Everybody wants to win it. You can ask people to stay out of your way, but they won’t. People won’t for a nothing like you. You want to do something about it? Oh, all of a sudden you’re talkative. 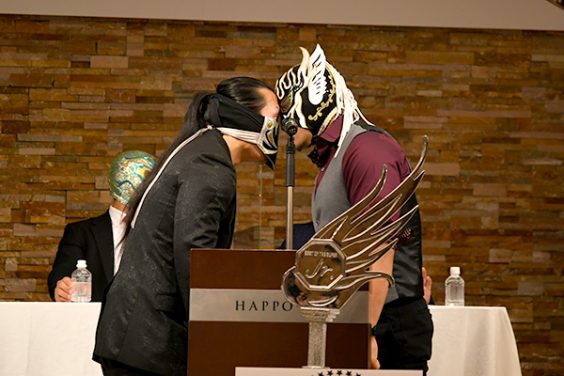 Oh yeah, this is fun. All these motivating.. factors. The switch is flipped, adrenaline flowing, all of that crap you talked, and the Perros Del Mal born pup lost that match just like he did three years ago. hasn’t made a scrap of improvement. Man that pisses me off.

At this point DOUKI made his way to the podium to confront Desperado.

Perros? Perros Del mal, the bad dogs, the stray dogs, whatever. I have respect for Perrito, so I won’t disrespect the name. But you? You’ll lose like a bitch. That, gentlemen is how you work a pun. DOUKI, I look forward to Makuhari. 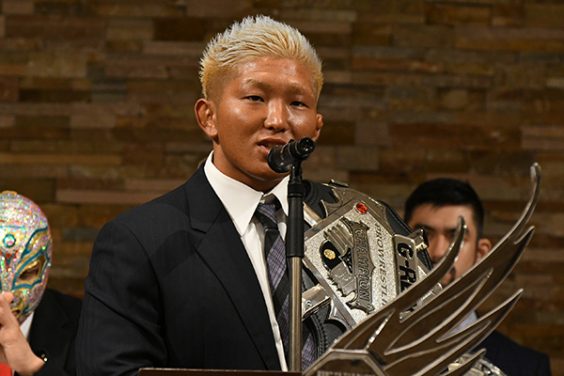 Hi everyone! I’m El Lindaman of GLEAT and #STRONGHEARTS. I’m very happy to be in this tournament. Thank you to El Desperado for putting my name out there. Thank you to NJPW, and thank you to GLEAT- I’m a champion of this new company and that brings with it risk, but the company has allowed me to be on this stage and I’m grateful for that.

I’m excited and nervous to be here. I’m 160cm, 70 kg. Not a great athlete in school, not a great student for that matter, and when I applied to be in the NJPW dojo they wouldn’t even take my application! I’m not worthy of being picked, and yet here I am, so that means a whole hell of a lot. See, I will take the feelings and emotions of all those wrestlers working hard outside of New Japan, all the fans who aren’t just watching New Japan. I’ll take them and wear them with me, so together we can leave a mark on this tournament.

My goal is to stand in a NJPW ring with my fist raised and yell ‘let’s have a GLEAT time!’. I know it’s my role as a champion to say I’m winning every match, but I also know that it isn’t so easy around here. But I do think that this tournament will end with fans realising there are some great things happening in other companies too. So that said, everyone, staff, fans, NJPW or not! Keep your eyes on me! Are you ready! Let’s have a GLEAT time! 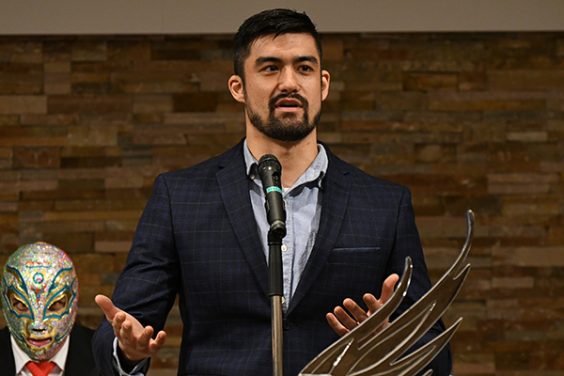 First off, thanks to NJPW and AEW for allowing me to be here. I’m really excited to achieve a dream I never thought I would be able to accomplish. But this isn’t a victory lap, this is the toughest junior heavyweight tournament in the world. I’m surrounded by champions, and former champions, but I myself am the ROH Pure champion. I have new mentors in Jon Moxley, Bryan Danielson and William Regal, all names NJPW fans should be familiar with.  They’ve unlocked a violent side in me I didn’t know I had. What better way to test it than in BOSJ? Thank you. 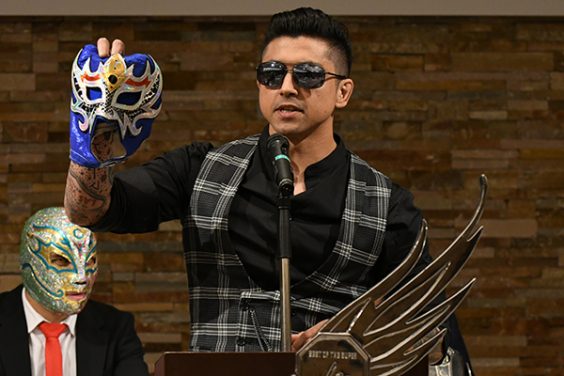 I won’t thank anybody for this. (Producing mask) you know what this is? This is Mascara Dorada. He can’t be here because he’s scared of me. But this is a warning. I’ll take all of your masks too. I’m in a room full of the best juniors in the world, but that’s not enough. Last time I beat Dorada it was in a tournament just like this. Best of the Super Jr. Where I also beat Kota Ibushi. Any of you guys ever beat him? Didn’t think so.

After I go through BOSJ, I’ll add IWGP junior gold to the United Empire. I’ve been an IMPACT X Division Champion, a (WWE) Cruiserweight Champion, and I think I’ve seen what I want to get first already. (To Wato) Don’t get too comfortable with that (IWGP Junior Tag title). What do you think about that? F**king Smurf. 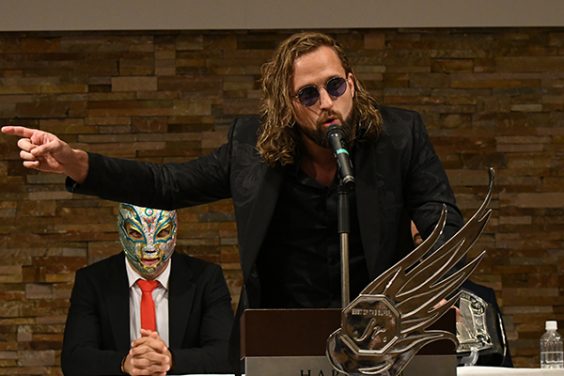 About f**king time. Let’s go. You ready for the main event? I don’t give a s**t about what anybody had to say up here. So I’ll keep this short and sweet. I stayed when everybody left, so I’ve earned Best of Super Jr. At Dominion, I’ll wrestle my tag team partner Taiji Ishimori, BULLET CLUB’s Cutest Tag Team will explode, I’ll become the new IWGP Junior Heavyweight Champion, and I promise right now, I’ll take the title and go into the G1 as champion.