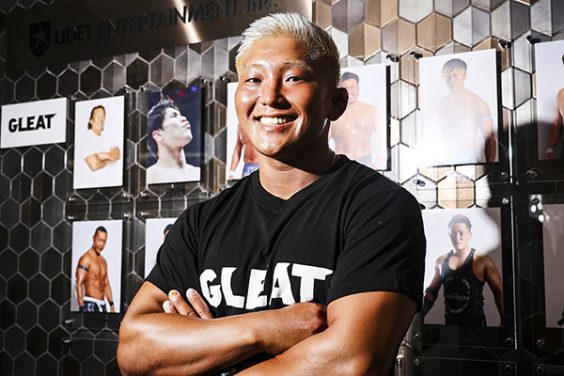 As Best of the Super Jr. got underway this past weekend, hype has surrounded the return of international wrestlers to the tournament, including champions from other organizations. Ace Austin and Wheeler Yuta are representing IMPACT and AEW/ROH as champions in this tournament, but what of the sole domestic import from GLEAT?

G-REX Champion El Lindaman has been firing up crowds as part of #STRONGHEARTS sporadically through 2022 in NJPW, but now looks to show what he can really do in the cerulean blue as a singles star. Before the tournament got underway, we spoke to GLEAT Pro-Wrestling’s top dog. 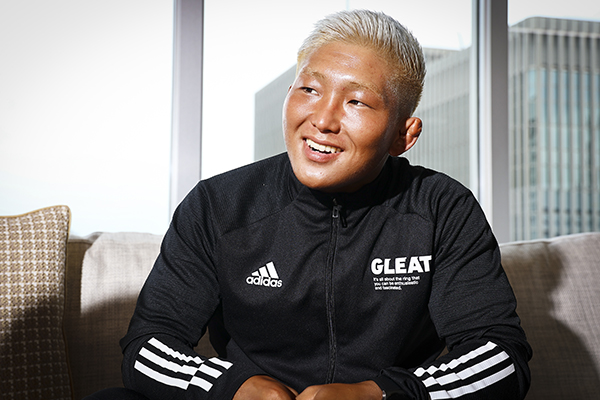 –So we’re speaking right before you make your Best of the Super Jr. debut. What’s your mindset right now?

Lindaman: It’s a big deal, for El Lindaman the pro-wrestler, and Yuga Hayashi the human being talking to you now. I really feel I was born to be a professional wrestler. I was a wrestler from the moment I was conceived even. To me, professional wrestling equals New Japan Pro-Wrestling, and it equals Best of the Super Jr. To El Lindaman, it’s a very important project, and there’s a lot of responsibility on him to produce results. But to Yuga Hayashi it’s the most important one month span of my life.

–How do you feel representing GLEAT and #STRONGHEARTS in BOSJ?

Lindaman: I’m grateful. I’m bringing the flagship title for GLEAT into this thing, and my boss (Hiroyuki) Suzuki still gave the green light to be here. So I’m grateful to him, grateful to NJPW of course as well.

–Did you expect something like this would happen as the year started?

Lindaman: When El Desperado first put my name out there, in the position he’s in, and with the influence he has, just mentioning my name at first was a treat. 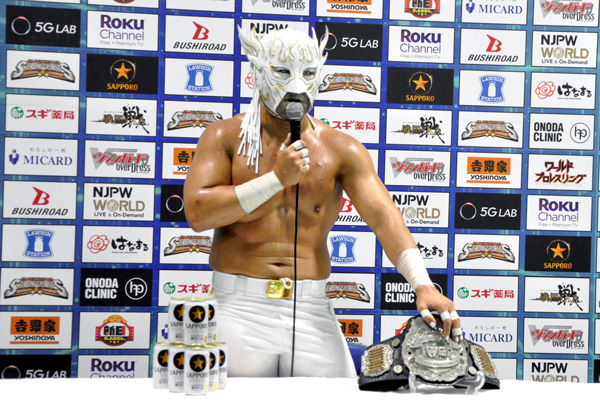 –You went on to be a part of the 50th Anniversary Event, and the last night of the New Japan Cup tour, along with CIMA and T-Hawk. How did the other #STRONGHEARTS members react to your entry?

Lindaman: They didn’t need to say anything really- I know myself just how important it is to represent the group in this tournament, we all kind of share the same mindset as far as that goes. So we haven’t really talked about it much other than for them to have my back. I’m only human in the end, and I lose confidence like everyone, but they’re there to have an outside view on things and tell me it’s OK, and that’s all I need. 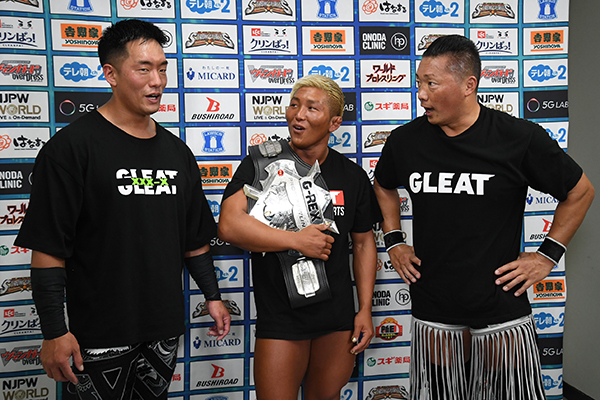 –You’ve been with the other members for your appearances before, but now you’re on your own.

Lindaman: Well, I think CIMA being at the Tokyo Dome, and then making that impact in the New Japan Cup really gave me something to build off of.

Lindaman: I think it was all Desperado who started picking at this thread on the sweater. It got a bit thinner when he lost his title, but still, that thread he picked at got taken by CIMA and now me. I’m next in this relay, so it’s important I make sure we don’t run out of thread. 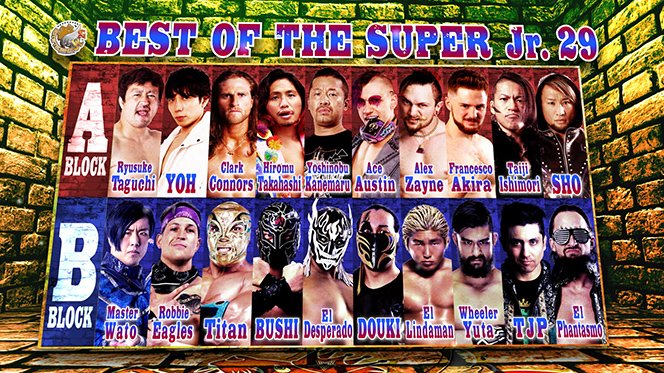 –You said on Twitter that when the BOSJ lineups were announced you were in the bath. When you got to your phone it was full of notifications.

Lindaman: Right. It was a real shock. It was actually all negotiated between the two companies rather than a direct deal, y’see. Mind you with GLEAT, there are quite a few announcements that catch the boys off guard (laughs).

–Oh, so you hadn’t heard before the announcement?

Lindaman: They checked up on my schedule, and made sure it was open, but not what for.

–They just said to clear out a few weeks in May?

Lindaman: Right. It could have been for shooting, or for a different project, anything. Usually in GLEAT they tend to tell us ‘there’s an announcement coming up at 8PM’ or whatever, and then we all find out together. That’s been the deal for the last year or so, so I’m used to surprises. This was maybe the biggest of all the surprises though.

–So how did you feel when you heard the news?

Lindaman: Thrilled, but at the same time ‘man, this is going to be hard’.

–It wasn’t just excitement, then.

Lindaman: After Desperado put my name out there I think a lot of fans were expecting a title match between me and him somewhere. that’s something that you can prepare for and put all your energy in. A tournament like this with all these matches back to back, that’s where you might get exposed (laughs).

–You have to put it all out there across nine matches.

Lindaman: But in the end, I never hold anything back. I always put everything into every match, and that’s the same of everyone in GLEAT. Don’t do that, and you won’t get anywhere. So I’m taking every match as it comes, and treating them all with the same importance.

These are all perfect opponents 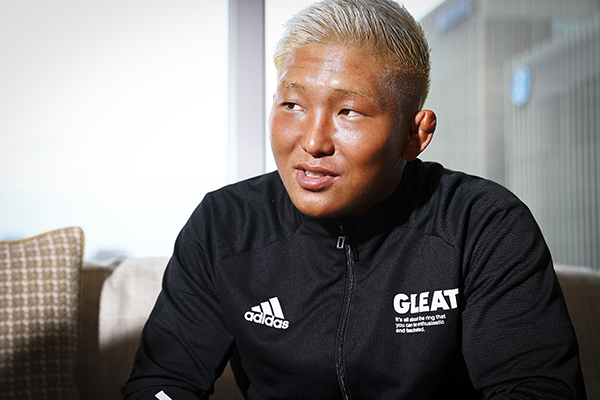 –So what do you think about the competition in B Block?

Lindaman: Man, these are all perfect opponents for El Lindaman. TJP I’ve been watching for a long time, and I know he’s been in BOSJ back in, what, 2011? DOUKI has this real great story behind his ascent, Robbie Eagles is a former champion… I think perhaps the only thing that’s missing is some of the flashy characters that A Block has.

Lindaman: Like you have Hiromu who’s larger tan life, and Ace Austin and Alex Zayne, maybe not many know them just yet, but I’ve wrestled them and teamed with them overseas.

–Oh, so you have some connection to those guys.

Lindaman: Yeah, I think I teamed with Austin? Obviously Ishimori has a lot of character in him. I think in B Block it’s more… maybe this isn’t the right way to put it, but its more the workhorse block. They’re a little harder for me to assess, and a little more focused on what they do in the ring rather than talking trash. It’s going to be a tough test.

DOUKI’s peaked. This is his ceiling 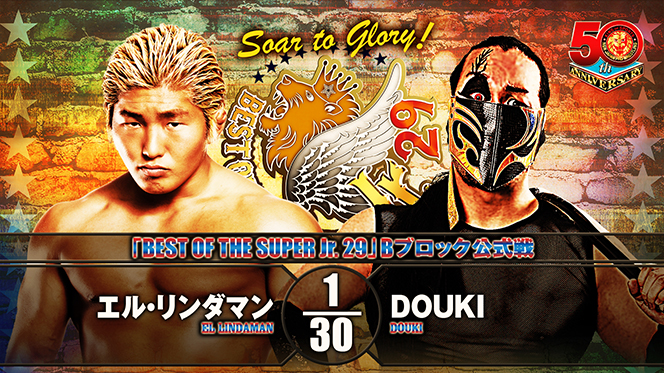 –So your campaign starts in Yamagata on May 17 (interview conducted May 13). You could say he’s part of the new generation of NJPW juniors, and with his connections to Desperado, this will be a significant match for you.

Lindaman: Out of anyone here, he’s the biggest trap I think.

Lindaman: Right. Like, people will be talking about him in terms of being a turning point for a lot of guys. He will be for Desperado for one. That’s a big reason why I want to make sure I win.

–DOUKI is continuing some remarkable growth.

Lindaman: No, it’s true. There’s a ceiling to what he does, and that’s where he’s at.

–What makes you feel that?

Lindaman: He had this fairy tale story right? Took himself from nothing, went to Mexico as a teenager, crawled himself up. But that story is done now, he’s here. So now he has to create something extra on top of that. Maybe that’s a change in character, maybe that’s a huge new move, or saying some really controversial stuff. The way I see it, he’s working under this glass ceiling right now, and won’t break through the way he is. But I mean, that’s fine, if he’s happy that way.

–Do you feel confident going into this one?

Lindaman: I think I really need to win. If I lose, things are going to be very difficult for me moving forward.

Lindaman: See, I think that’s all for show. He makes a show about caring about other people, but I don’t think he’s the type. It’s all just for promotion, I reckon.

Lindaman: I absolutely want to win this one.

If I’m not a champion through this tournament it reflects badly on me, so I really need to beat Irie 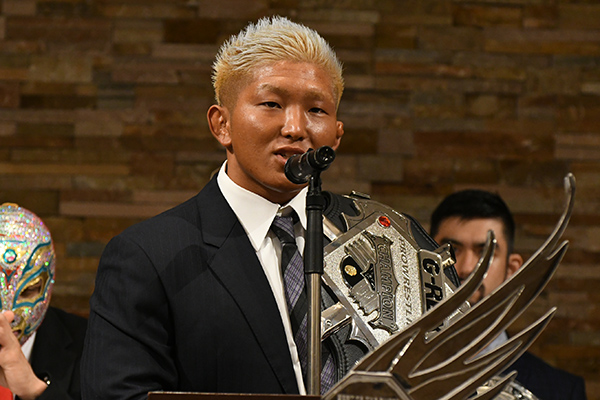 –After your first match in Sakata, the tour continues to Sendai Sun Plaza Hall. You however will return to Tokyo for one day to wrestle Shigehiro Irie for the G-REX Championship in Korakuen.

Lindaman: It’s like my second of ten league matches is with Shigehiro Irie… Y’know, from my announcement up until the start fo the tournament, I haven’t been talking all that much about BOSJ, and that’s by design.

Lindaman: See, I don’t know what this Korakuen Hall GLEAT card means if anything to the NJPW fans, but to me, it’s a pretty damn big deal. Yuuga Hayashi wants to scream about BOSJ from the rooftops, but for El Lindaman to do that would make the GLEAT fans feel like I’m abandoning them. This match is super big, and Irie is an unbelievable opponent. It’s amazing to me that he isn’t a global superstar already.

–And of course, there’s that pressure of having started the tournament with that G-REX title.

Lindaman: Me and Irie are #STRONGHEARTS teammates, but where I’m wrestling him, on this schedule, I don’t know whether to think of him as my pal or an enemy in B Block along with the rest of them.

–Of course, you really want to defend that title and carry it through the rest of the tournament.

Lindaman: I lose, and the fans will instantly spot it. They’ll be calling me out, calling me a loser and they’d be right, too. The value of me coming into this tournament as champion would get lost. I can’t let that happen. 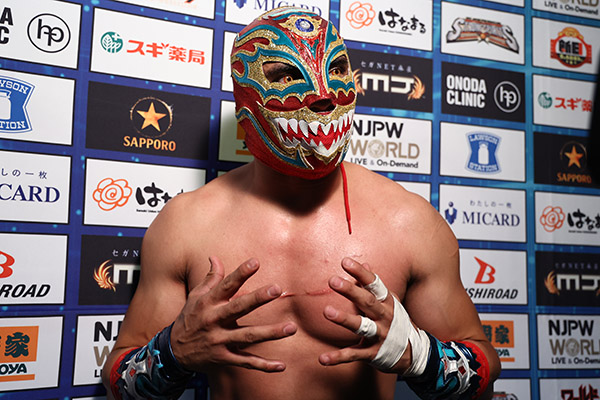 –The day after your title match, you face Titan, May 19 in Aomori. With a name like El Lindaman, it’s easy to get the idea you have a heavy lucha influence, but that isn’t quite the case?

Lindaman: I spent about two months in Mexico, heh.

–So you’ve dipped your toes into the lucha world.

Lindaman: Hmm. But Titan isn’t ‘just’ a luchador. He’s been in NJPW, and he’s been all over the place. He has a lucha foundation, and he’s built himself up as an international wrestler on top of that. I don’t think that he’ll be difficult to deal with because he’s a lucha guy, really. I’m pretty comfortable wrestling luchadors.

–It’ll be a fun match to watch.

Lindaman: It’s another one that’s mine for the taking.

TJP is where those green lights turn red 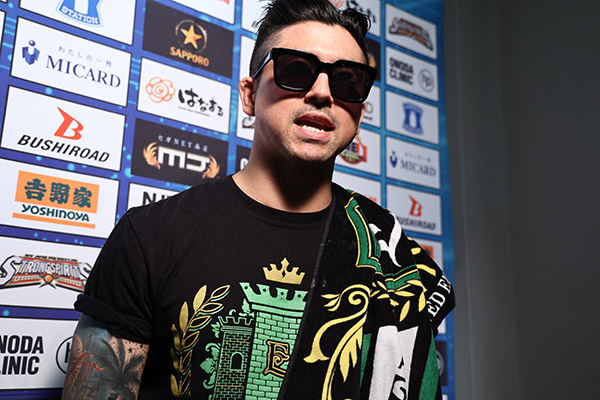 –You seem a little less confident all of a sudden.

Lindaman: This is a key point for me. I saw him win WWE’s Cruiserweight tournament. After that I got to spend some time with him the States. He’s a cool guy. A great wrestler, similar body type to me, very technical. Honestly, he’s a hell of a competitor.

–So he stands out to you.

Lindaman: He’s gotten a whole load of momentum in United Empire, and I can see him being a big part of NJPW in the US and Japan. So this is absolutely a key match for me. It’s tough! I think those green lights early in the tournament are turning red! 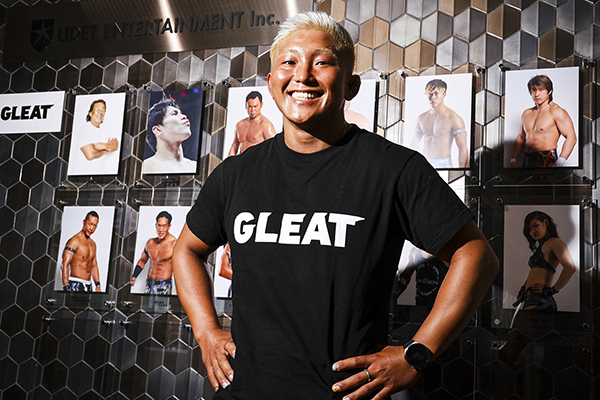