B Block underway in Sakata 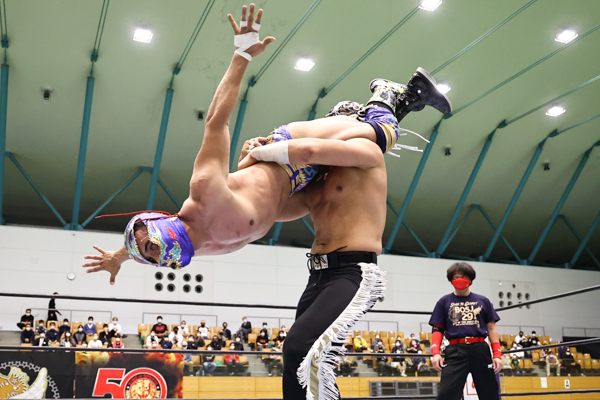 May 17 saw the second night of Best of the Super Jr. in Sakata, with B Block in action, the main event seeing a true battle of a masked tecnico in Titan facing the rudo El Desperado. After a slick opening sequence, Titan would sent Desperado out of the ring with a rope spring tijeras, but a follow up dive would be countered with a Desperado spear as the former IWGP Junior Heavyweight Champion took control. 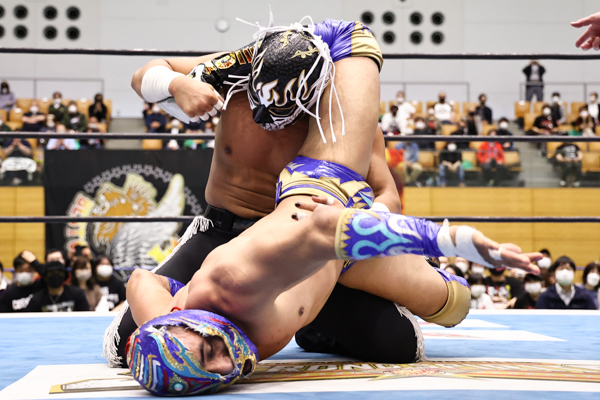 Completely stalling Titan’s momentum, Desperado tore at the CMLL luchador’s mask before attacking his knee, but Titan had enough of a base to elevate Desperado over the top ropes to the floor, where a gorgeous top rope quebrada awaited. The attack dealt more damage to Titan though, as did a missile dropkick; hobbled, Titan went for a Figure Four to even the odds on Desperado, who screamed in pain before rolling to the ropes. 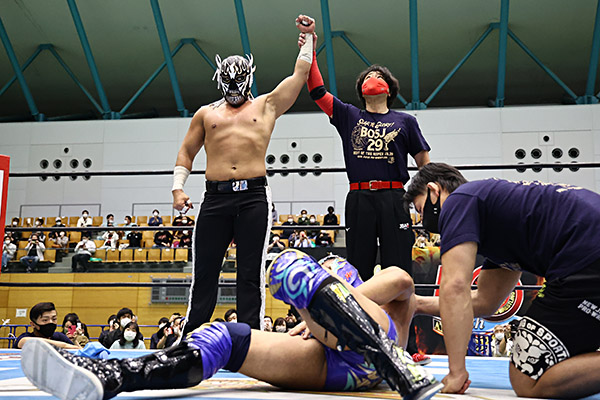 Desperado’s revenge was swift as he found Numero Dos on Titan, who just barely made the ropes. Both men’s pain thresholds being tested, Titan proved slightly faster on his game, following Desperado to the ropes for a gorgeous swinging DDT, and then a double stomp across the back. Looking for his signature springboard version though, Titan only found empty canvas, and having jammed his knee again was in trouble. Titan kicked out of Guitarra Del Angel, and rolled up his foe for two, but after a hard shot to the face, lost to the Pinche Loco. 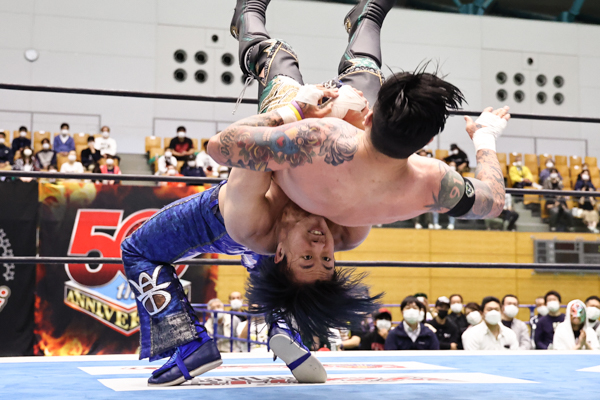 On a rough night for champions, TJP was quick to make a statement on one half of the IWGP Jr. Heavyweight Tag Team title holders, diving to Wato as he made his entrance, but being met with a tope con giro in return. Wato kept moving with confidence inside, but TJP was able to turn the tides, the Public Enemy landing a Facewash and a series of punishing submissions. 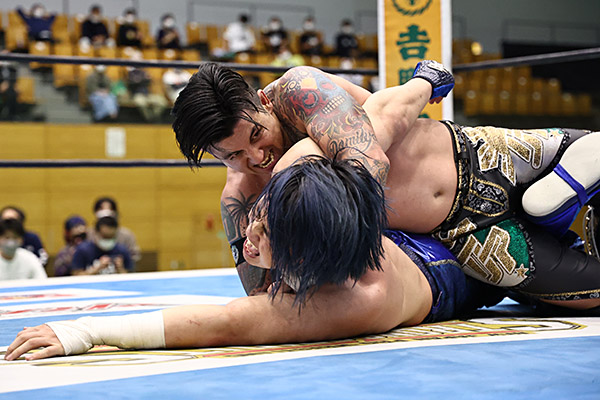 The United Empire continued to wrestle a clinic on Wato until a high leg lariat created an opening for the tag champion; a high angle German suplex following up for two. A swinging DDT and Final Cut would give two to TJP, but Wato perservered with Recientemente for a nearfall of his own. Still, after the damage dealt to him by the Public Enemy, Wato was too slow to hit RPP, missing the move and falling to the Mamba Splash into a Pinoy Stretch. 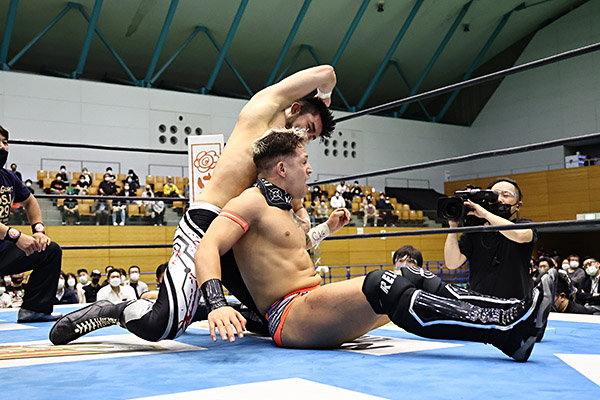 Robbie Eagles and Wheeler Yuta set a high pace after the bell before the AEW representative took Eagles down via the wrist and showed his submission mastery. A bow and arrow couldn’t keep Eagles down for long as he struck in combination, but Yuta would respond with some hard elbows and a stiff dropkick, going on the offense before a basement dropkick brought the momentum to the Sniper. 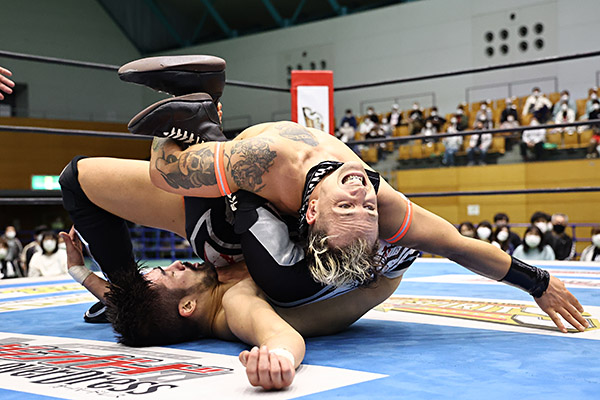 After escaping Wheeler’s German suplex, Eagles was able to hit corner double knees before further weakening the taller Yuta’s base, but he couldn’t get the 450 across the leg. As the two men traded, Yuta’s reach led to more powerful strikes, and his power saw Eagles hoisted into the Yuta lock, but a counter saw him trapped in the Ron Miller Special, driven to the ropes at the ten minute mark. Needing to go for the kill, Yuta managed to land powerful elbows to the neck, and went for a double underhook, but would be rolled up for the three. 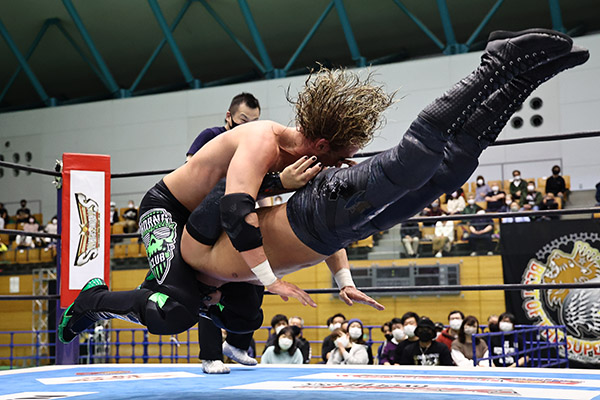 El Phantasmo wasn’t ashamed of using some dirty tactics out the gate, with a thumb to the eye of opponent BUSHI and some grandstanding that carried the price of a missile dropkick. The sneaky offense would continue with ELP on the wrist (and the nipples) of BUSHI, but overconfidence saw him sent to the floor where he was met with a tope suicida. Pushing the pace, BUSHI would go for MX, but his night came to an end when he was countered with Sudden Death and then the CRII. 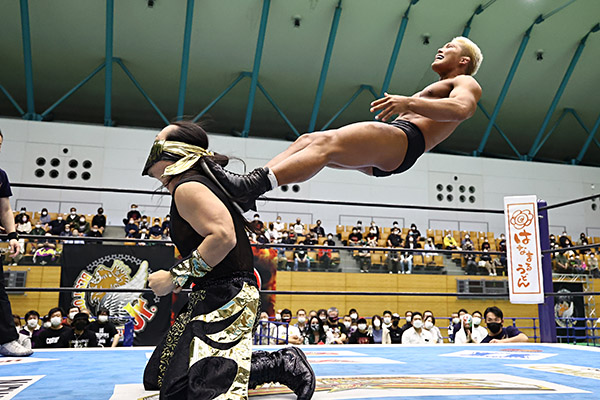 The night’s tournament action started with El Lindaman doing battle with DOUKI. Lindaman set a high pace early, but got slowed with a stungun into the ropes, using his size advantage to control the smaller Lindaman until a snap DDT and missile dropkick. An exploder suplex followed for the G-REX Champion, and though Lindaman would dive into the Italian Stretch, his power to weight ratio saw him escape to hit a Kumagoroshi and German for two. Still DOUKI kicked out, and struck with Doton No Jutsu before Suplex De La Luna saw him to a surprise two points. 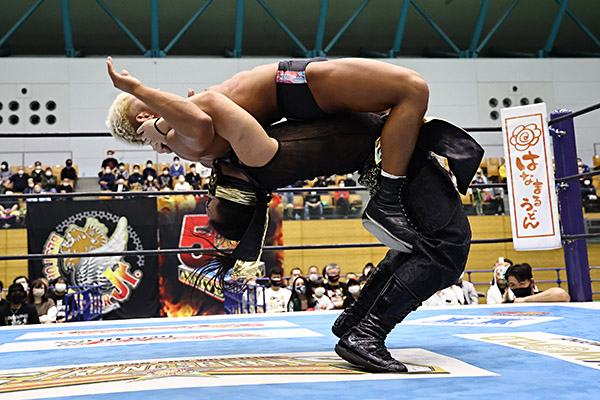