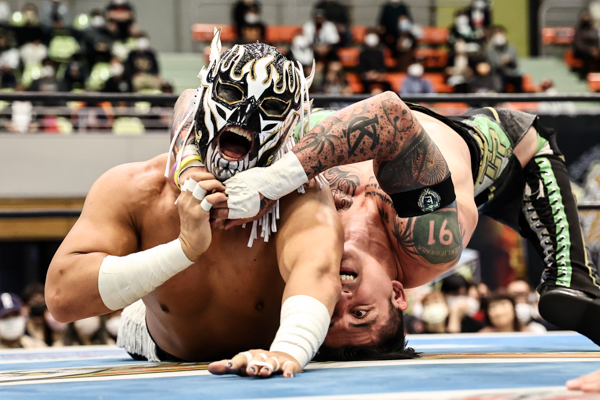 May 19 saw night four of Best of the Super Jr. unfold in Hachniohe Aomori, with TJP and El Desperado colliding in the main event. In their first singles meeting, many expected a technical and vicious display between the two, but few could have predicted how thoroughly TJP would dictate the pace in the early going. A plancha followed by a shot into the ringpost gave TJP free reign over his masked opponent; a spear from Desperado created space, but TJP quickly closed the door with a splash across the ropes and the Mamba Splash for two. 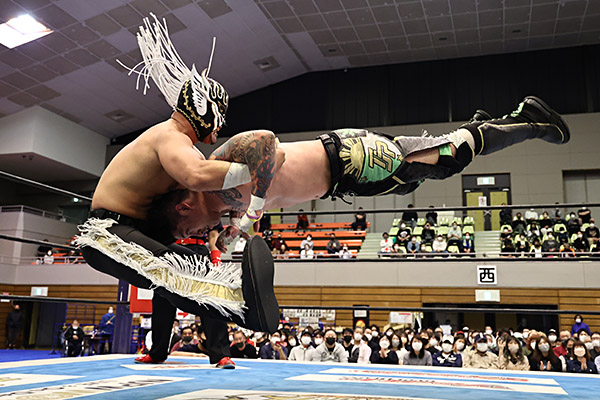 Firmly on the back foot, Desperado would get a spinebuster, but was quickly countered into a Cobra Twist; still with his wits abouts him, Desperado tried for a Stretch Muffler, but was stopped into an STF. A tornado DDT would follow, but Desperado didn’t fall for a second Mamba Splash, and avoided contact before getting his Stretch Muffler. As reversals came thick and fast, TJP tried to fight our the hold only to be dropped with a bastard Driver; TJP fought hard to escape Pinche Loco, but Desperado would finally hit the move to pick up a hard fought win. 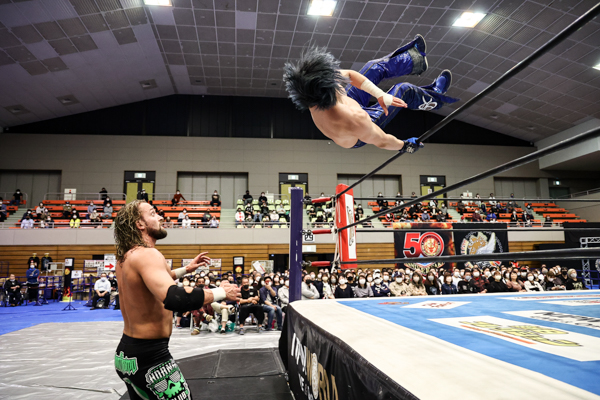 Well familiar with one another in tag meetings through 2022 thus far, El Phantasmo and Master Wato set a cautious pace early in the semi main, each escaping from the other’s head scissors before some athletic counters. It would be Wato taking the first big impact of the match though, Phantasmo dropping him with a suplex on the floor and assuming control. 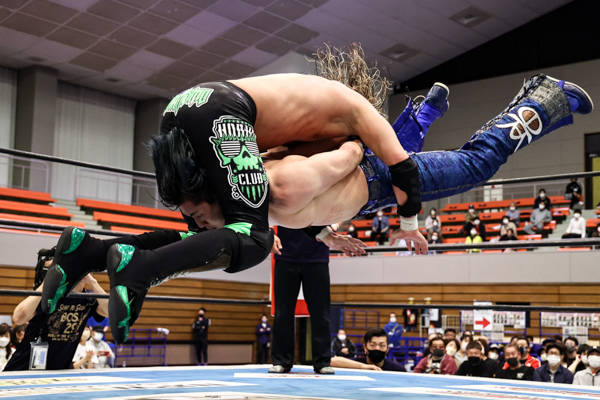 At the ten minute mark, Wato caught a break with a pair of knees to Phantasmo’s gut in mid Lionsault, before a tope con giro. As Wato continued to push the pace, a tornillo would follow, and a missile dropkick would get a two count before another near fall from an elevated German suplex. With Recientemente, Wato seemed completely in control of ELP, but the UFO would stall his momentum. As the match passed the 15 minute mark, the two met one another with heavy boots, before trading hands, before a Wato leg lariat. Wato would go up top, but was caught with Sudden Death, and then the CR II to move ELP to four points. 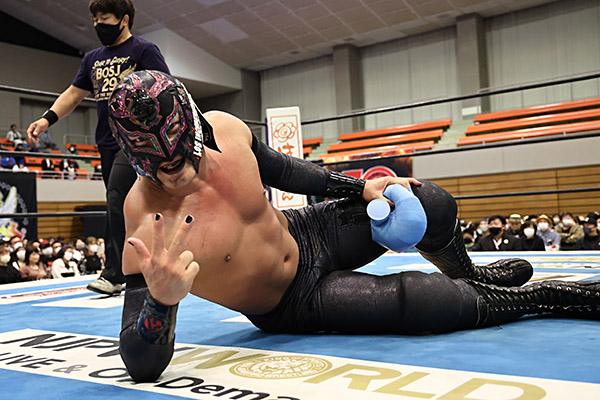 Robbie Eagles set a high pace against BUSHI, landing a suicida con giro out the blocks, and though BUSHI would take brief control of the former IWGP Junior Champion, Eagles would find BUSHI’s knee, and began striking in combination. With a 619 to the knee and springboard dropkick, Eagles started homing in on the Ron Miller Special; BUSHI would create distance with a missile dropkick, but was badly hobbled as a result. Eagles trapped BUSHI in the submission, torturing his masked foe, but after BUSHI made the ropes, he used the same part of the ring to hit his signature DDT. After a spectacular backcracker counter to the Turbo Backpack, a Destroyer and then the MX followed for a huge win. 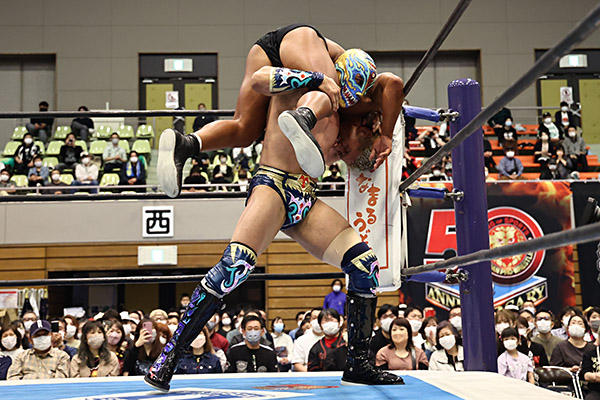 Titan and El Lindaman started their match both winless and still looking to prove their worth, trading holds and then strikes before Titan went for a dive but was met by Lindaman’s boot. Lindaman would control the pace until Titan cut his foe off at the legs with a Figure Four, still it was the legs of Titan in agony after a missed legdrop onto the apron was followed by a huge Lindaman tope con giro. 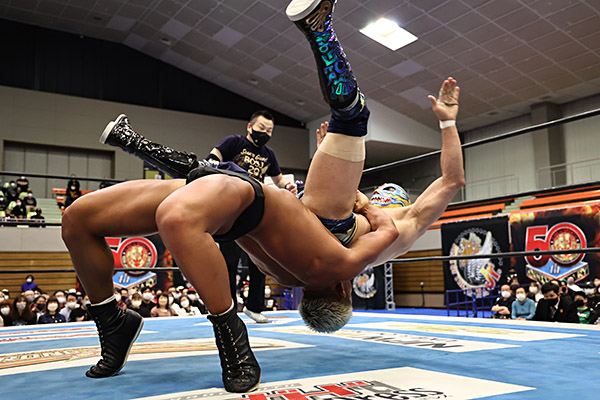 Fighting through a short DDT from the G-REX champion, Titan went back to the Figure Four to slow Lindaman, and drove his opponent into the turnbuckle but with his leg still troubling him, missed a buzzsaw kick to be met with a backdrop suplex. A double stomp scored for Titan, but he was still a step slow on the springboard follow up, getting caught with a dropkick, the Kumagoroshi and a deadlift German Suplex for the win. 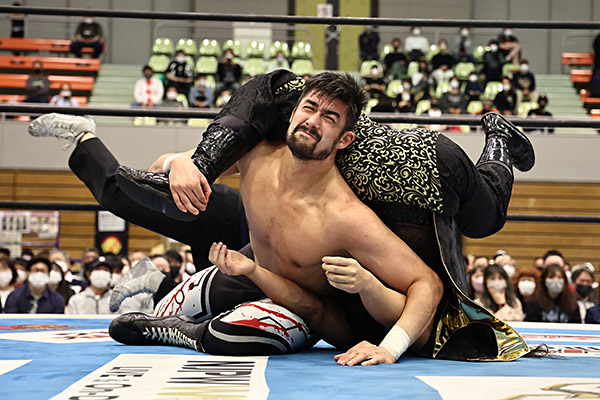 First to hit the ring in league action were Wheeler Yuta and DOUKI. After Yuta started the match with control of a snug headlock, DOUKI was first to take things outside and to the air with a tope to take control. After a lariat, Yuta would respond in kind with a tope suicida of his own, and kept up the pressure, a German Suplex and Cattle Mutilation sending his opponent to the ropes, but DOUKI would respond with the Italian Stretch #32. Daybreak followed for two, and DOUKI wanted Suplex De la Luna, but would be blocked; both fought over their Seatbelt/Rivera Specials, but after a barrage of elbows, Yuta would get the hold and the win.