June 12 will see NJPW’s summer kick off in full effect. With Forbidden Door in Chicago’s United Center, and G1 Climax 32 looming large, who will make moves in Osaka Jo Hall? 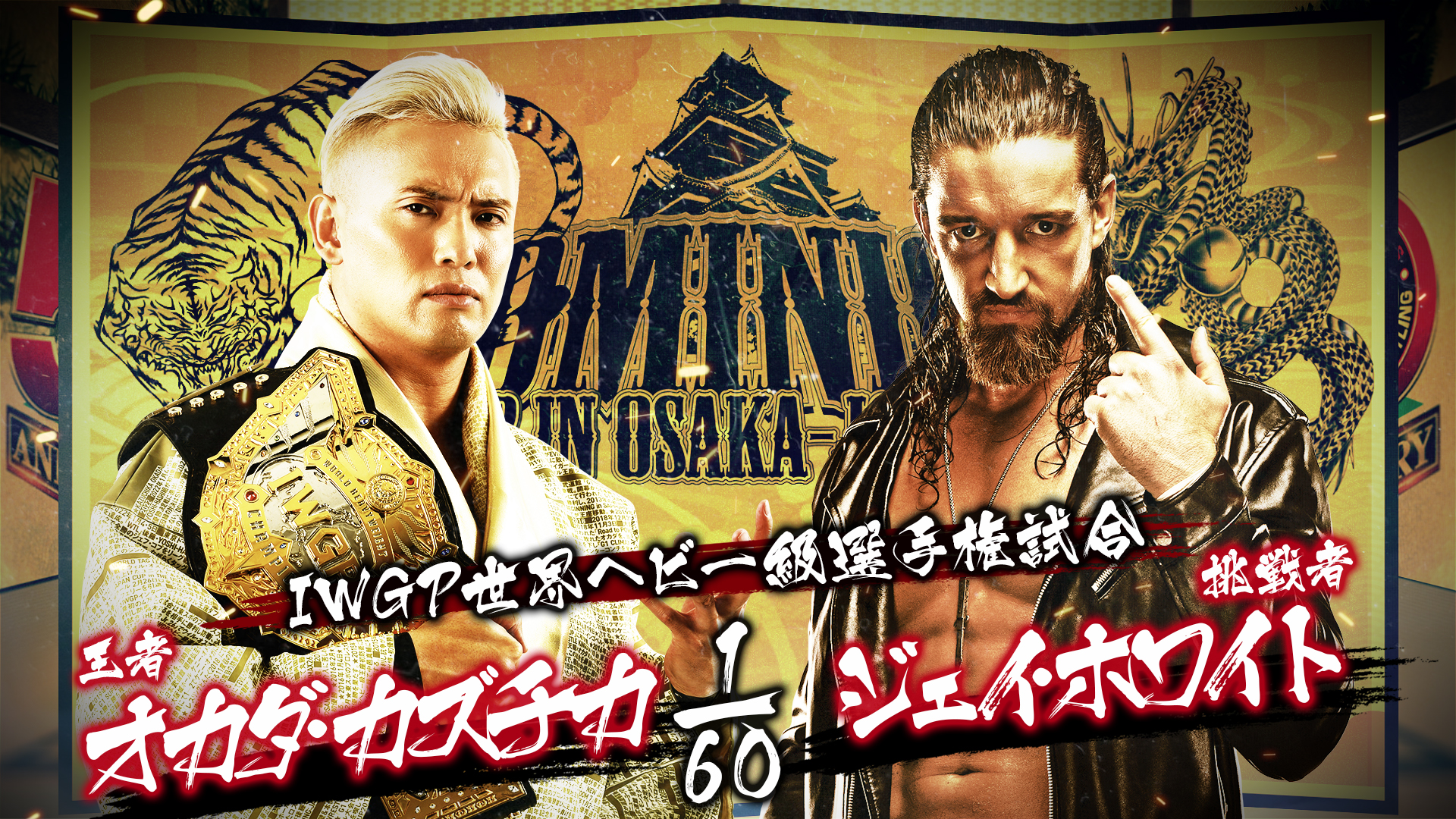 The main event of the evening will see Kazuchika Okada seek his fifth defence of the IWGP World Heavyweight Championship against Switchblade Jay White. White made his return to Japanese competition on May 1 at Dontaku, laying out Okada with a Bladerunner and making it clear that he had been away from the world title scene long enough.

Okada and White haven’t clashed one on one since G1 Supercard in Madison Square Garden. That was the scene of the Rainmaker’s one and only singles win over White, who has had Okada’s number in every situation except with a title on the line. Ever since the events of April 2019, Jay White has spoken long and often about ‘single handedly selling out’ Madison Square Garden. Now, he seeks to wear the IWGP gold into the United Center at Forbidden Door for another large scale American sellout. To do so he has to face and beat the King of the King of Sports in Osaka-Jo Hall. 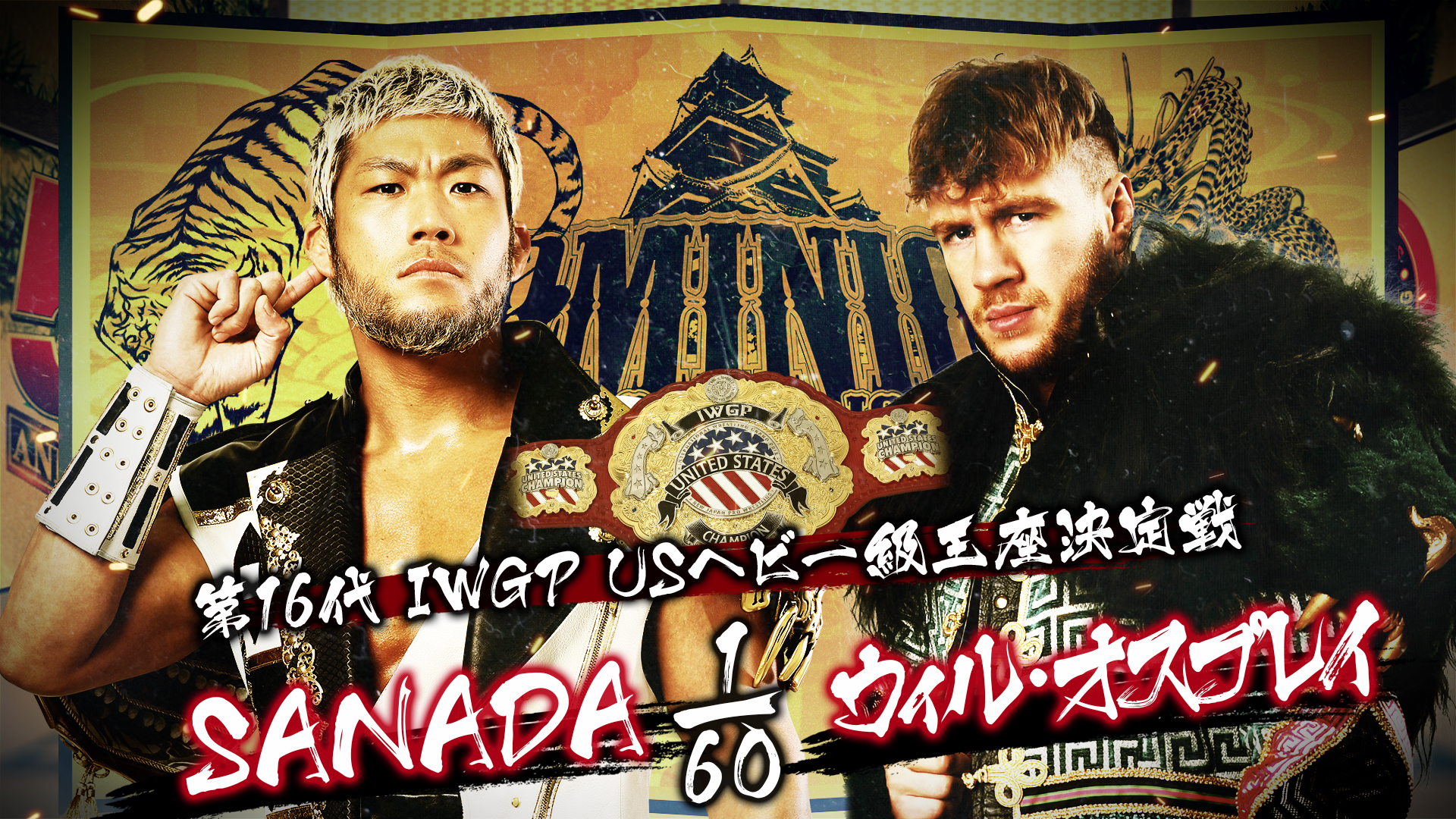 The IWGP United States Heavyweight Championship has been embroiled in a thick layer of controversy from the start of the year. Hiroshi Tanahashi would defeat KENTA to win the title on night two of Wrestle Kingdom in a streetfight brutal enough to put KENTA on the injured list for the last five months, before losing the belt on his first defence to SANADA.

Cold Skull suffered a fractured orbital bone in the New Japan Cup at the hands of Will Ospreay, vacating the title which was set to be determined at Dontaku between Ospreay and Tanahashi, only for a last minute COVID positive to see Ishii substituted in. Tanahashi again seized the gold, and with challengers all lining up with a legitimate claim, a four way match was signed for Capital Collision.

Juice Robinson would win the four way after a low blow to Ospreay and with the Briton’s foot visibly breaking the plane of the rope. In the days leading up to the Best of the Super Jr. final, Juice and Ospreay would exchange jabs online, only for neither to be present in the Nippon Budokan owing to a sudden bout of appendicitis and a kidney infection respectively.

That Budokan event would see a further wrinkle as SANADA returned to address the crowd and declare that he was challenging for the US title he never lost on June 12 at Dominion. Though initially agreeing to three way that was signed, an about turn to receive surgery has resulted in him being stripped of the title. Can some stability be brought to the US Championship? 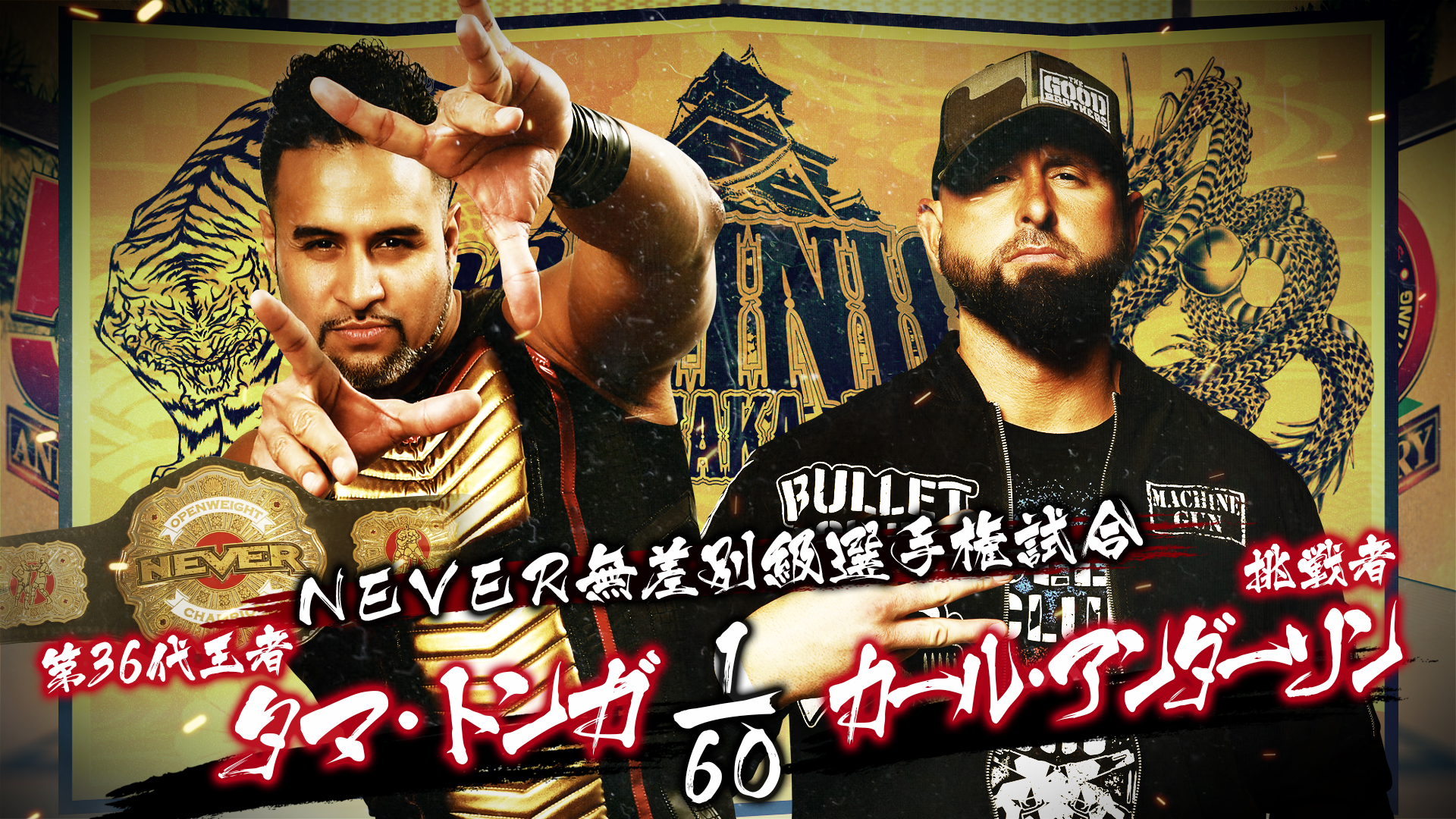 It was along with Anderson that Tama joined the ‘core four’ of BULLET CLUB back in 2013. At the time, the young Tonga was being mentored by the Machine Gun, a mentorship that would eventually see Tonga inherit the Gunstun, and the Magic Killer double team when Gallows and Anderson left NJPW in 2016. Yet when Jay White reinducted the Good Brothers earlier this year, Tonga was squeezed out and betrayed by his former partners. Now representing Hontai, Tama got some measure of revenge on BULLET CLUB by defeating EVIL at Dontaku, and following with an emphatic Gunstun to stand victorious at the Budokan Friday night. Yet Tama can’t think about closure until he picks up a win over his former mentor in Osaka. Can he retain, or will Anderson, a finalist in the tournament to crown the first NEVER Champion, end up as the title’s 37th holder? 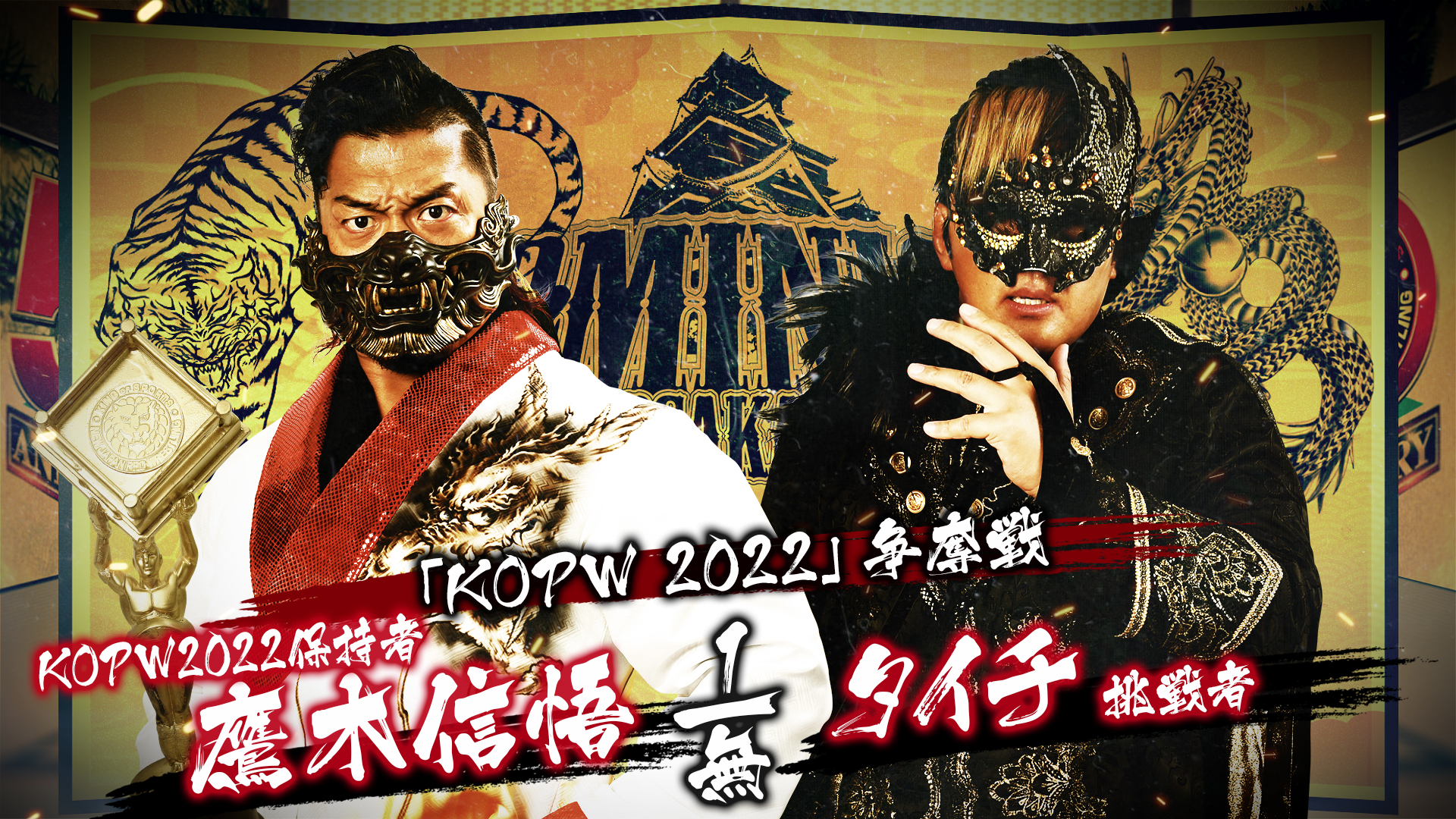 In the weeks that followed though, taichi would pin Shingo Takagi for a six count with a Taichi Style Gedo Clutch at Dontaku, before the BOSJ finals saw Shingo get some revenge by pinning Taichi’s shoulders to the mat post match with a Ground Cobra. Who holds the upper hand is debatable, but at any rate, this KOPW 2022 rematch is official. The only question remains what rules will be put in place? Taichi has given Shingo ‘a day or two’ to think about it, while Takagi has declared he already has something in mind that will test Taichi ‘physically and mentally’. Stay tuned for more to come. 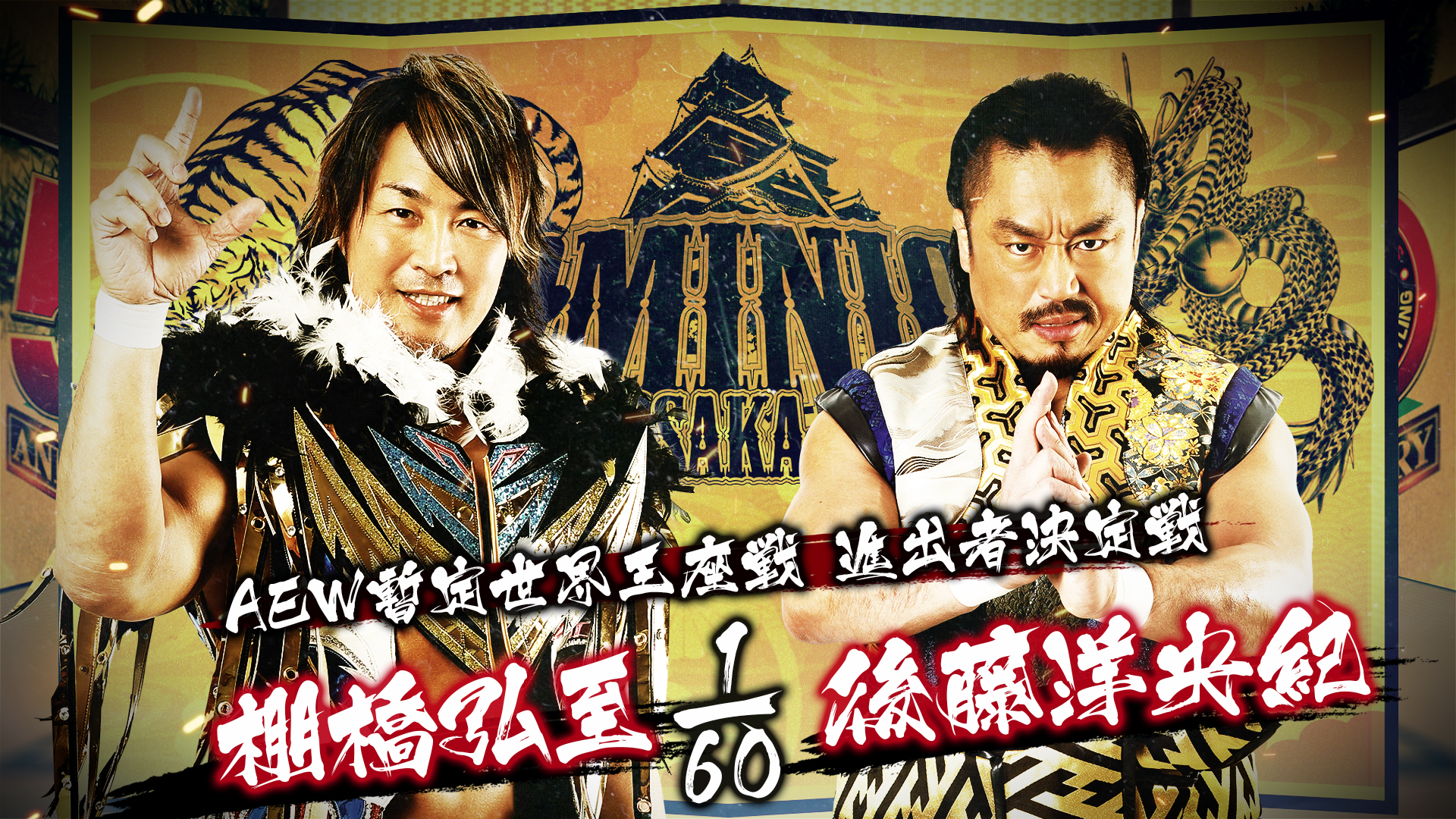 This Wednesday on AEW Dynamite, Hiroshi Tanahashi answered a challenge from AEW World Champion CM Punk for Forbidden Door in the United Center in Chicago on June 26. On Friday June 3, Punk announced that he was injured and would be requiring surgery. As a result, he will not be competing at Forbidden Door, but will not vacate the AEW World Championship. Instead, an Interim AEW World Champion will be crowned at Forbidden Door in an NJPW vs AEW singles match.
Representing AEW will be the winner of a match between former AEW Champion Jon Moxley and the winner of an all-star battle royal, both matches taking place June 8 on AEW Dynamite. For NJPW, Hiroshi Tanahashi’s position as de facto challenger will itself be challenged. Hirooki Goto will face Tanahashi for his contendership on June 12 in a new match added to Dominion in Osaka Jo Hall.
Goto and Tanahashi’s long and storied rivalry, dates back nearly two decades and highlighted with multiple classic matches. After Goto first returned to NJPW in 2007 from Mexican excursion, he shot to IWGP Heavyweight contention, and the ensuing title match with Tanahashi was one of both men’s career favourites. Yet in their 13 matches, Goto has only been able to seize victory twice, a mark of the CHAOS warrior being deemed one of wrestling’s most proficient nearly men. Could this be the moment for Goto to seize the top prize in a different company? 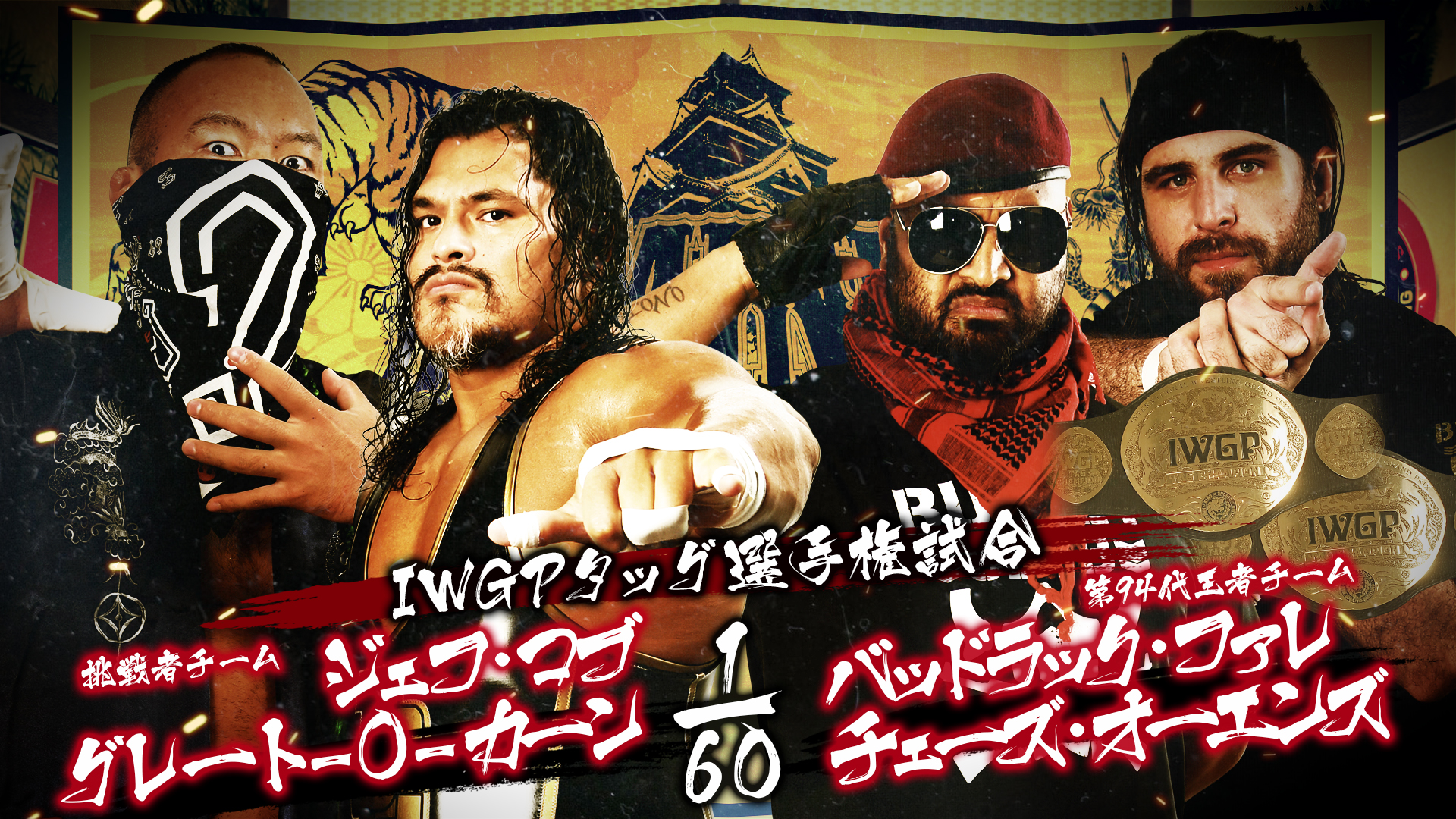 Bad Luck Fale and Chase Owens make their first defence of the IWGP Tag team Championships at Dominion when they face Great-O-Khan and Jeff Cobb. O-Khan and Cobb lost the tag titles in a Dontaku three way bout, not being involved in the decision as a Rocket Launcher Elbow Drop saw Hirooki Goto pinned. The former champions were quick to assert their right to a rematch, but have been frustrated at every turn since; in Washington DC, Owens would have his feet on the ropes to pin O-Khan, while the BOSJ finals in the Nippon Budokan saw United Empire cruising to victory in a six man preview until Ace Austin joined BULLET CLUB and turned the tide. Now a direct tag team battle will settle the score June 12. 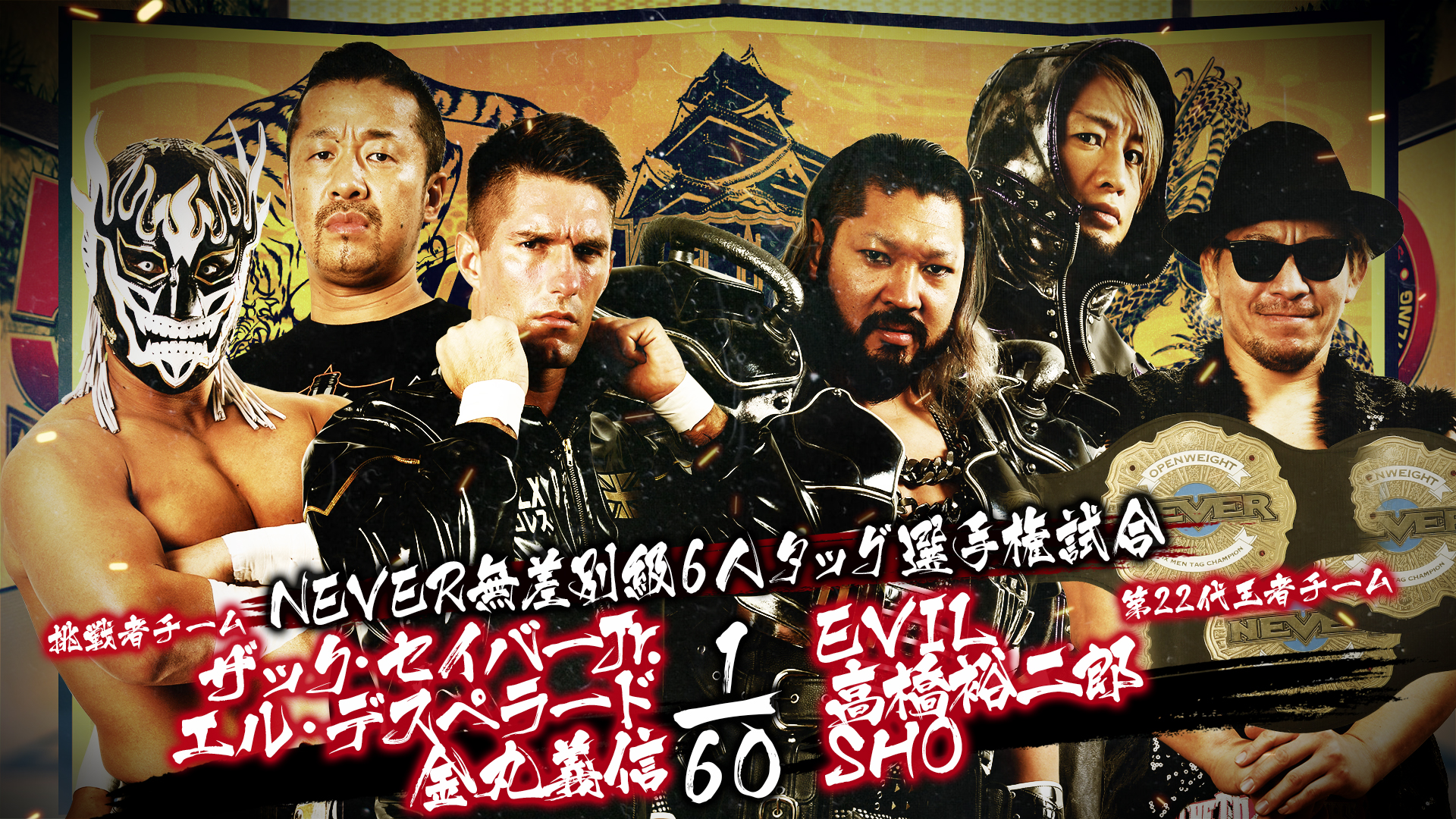 The first of six championship matches on the night will see Suzuki-Gun move to capture HOUSE OF TORTURE’s NEVER six man titles. During Best of the Super Jr., Yoshinobu Kanemaru became the ‘Babyface Master’ for a night when he outsmarted SHO en route to an easy victory, putting SHO out of the tournament to the delight of fans worldwide. After securing victory with the Touch Out, Kanemaru was quick to grab one of the NEVER 6 man belts, and further soldified that claim alongside Zack Sabre Jr. when the dup beat EVIL and SHO in the Budokan on June 3. ZSJ said he would be happy to provide an assist in defeating the ‘house of dickheads’ and now this title match is official. Could H.O.T’s seven month reign be meeting its end? 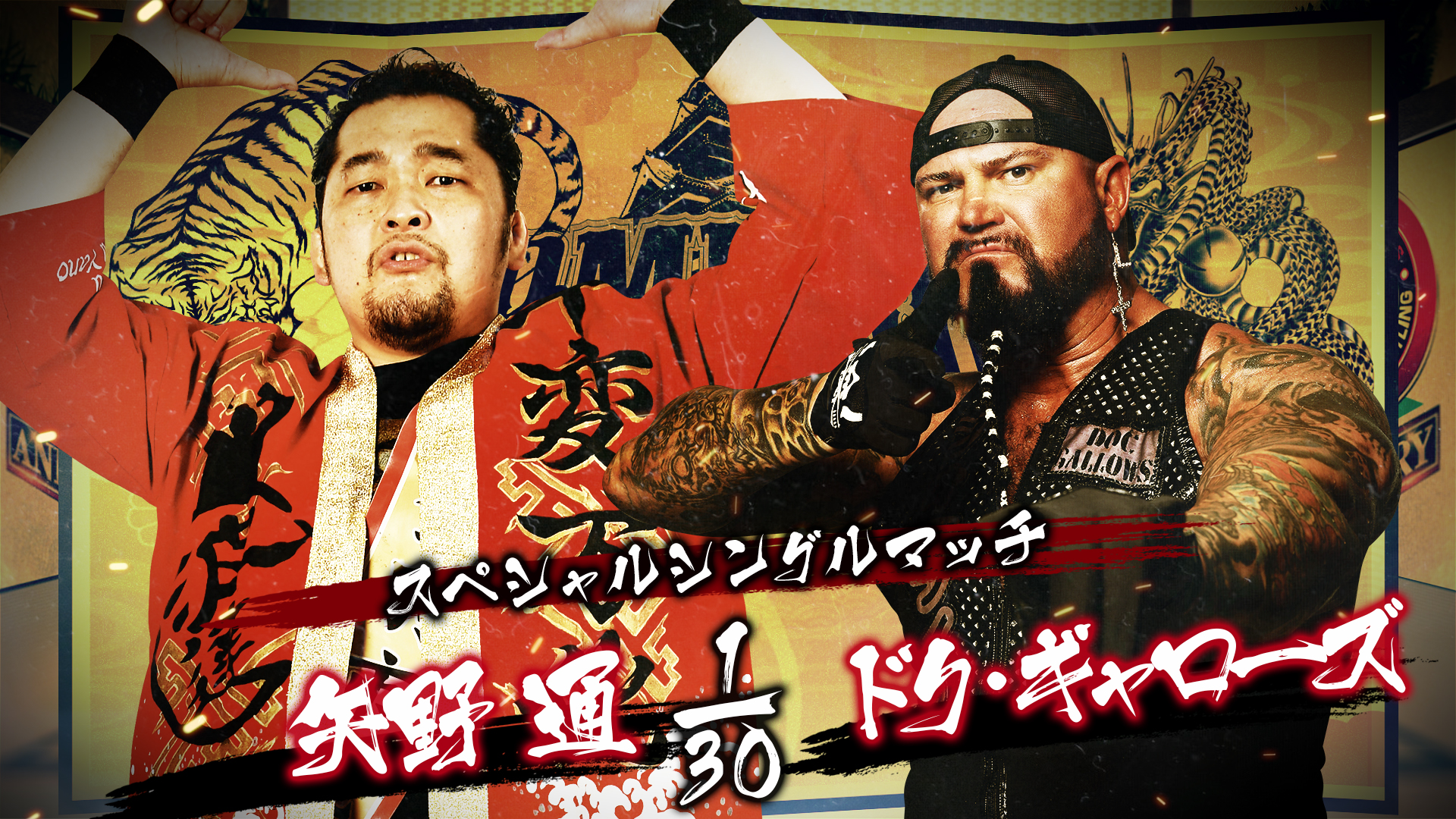 A special singles bout will see Toru Yano face Doc Gallows. After The Good Brothers returned to Japan on May 1 for Dontaku, Doc Gallows would have his first official NJPW match in Japan in over six years, but would be the recipient of some humiliating antics from Toru Yano. Yano would spray gallows with disinfectant, stating that he was ‘trying to clean his tiny brain’, before targeting the big man’s beard; backstage Gallows would issue a singles challenge for Dominion saying the ‘comedy act is over’. Will Yano be able to outsmart the powerful Gallows in Osaka? 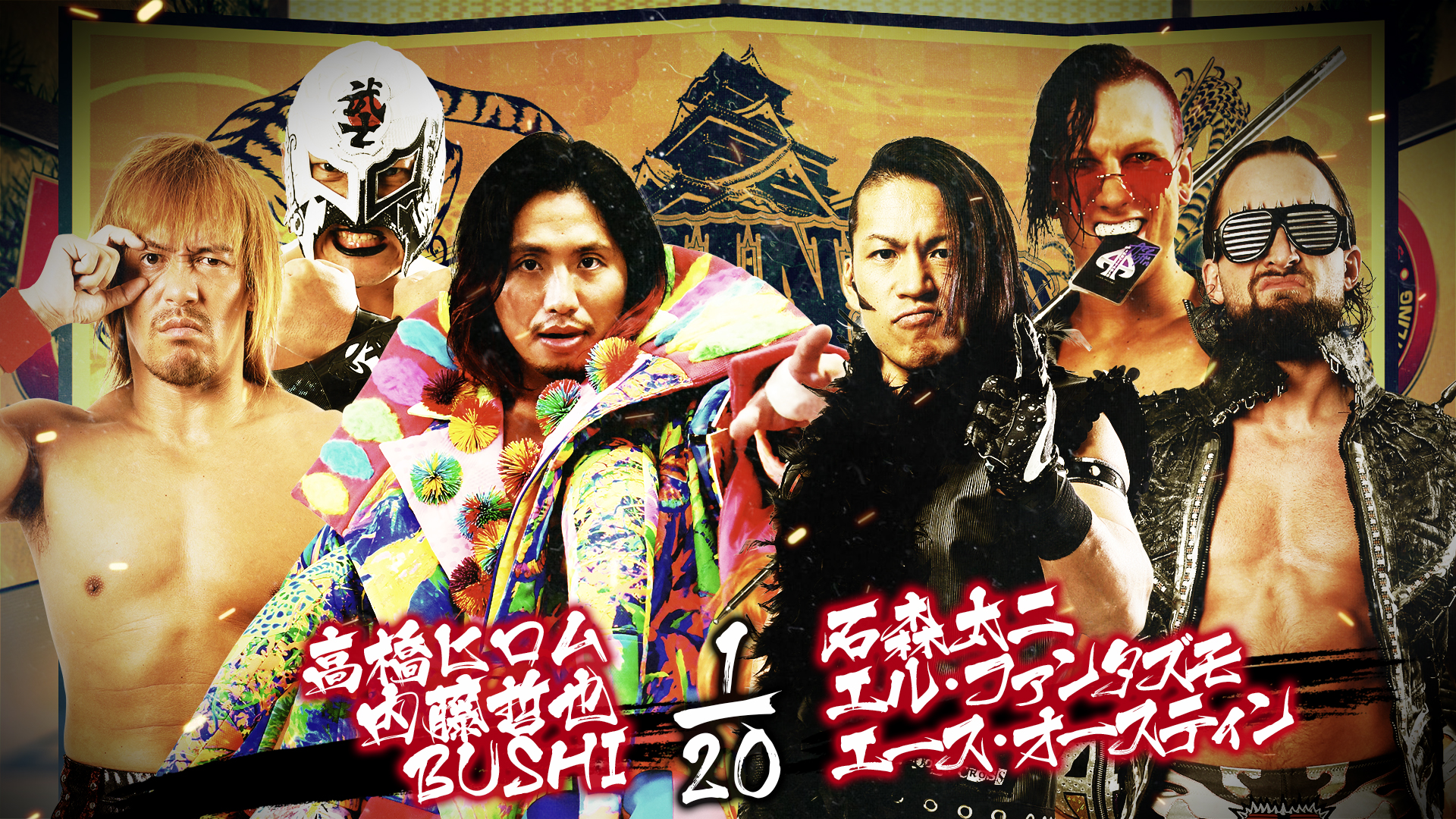 A six man preview of June 21’s IWGP Junior Heavyweight Championship match between Hiromu Takahashi and Taiji Ishimori, the head up a trio from LIJ and BULLET CLUB, including BC’s newest member Ace Austin. Austin turned his back on a friendship with Alex Zayne to join BULLET CLUB on June 3, a jump that the X Division Champion declared was ‘inevitable’. How will he gel with new partners tonight? 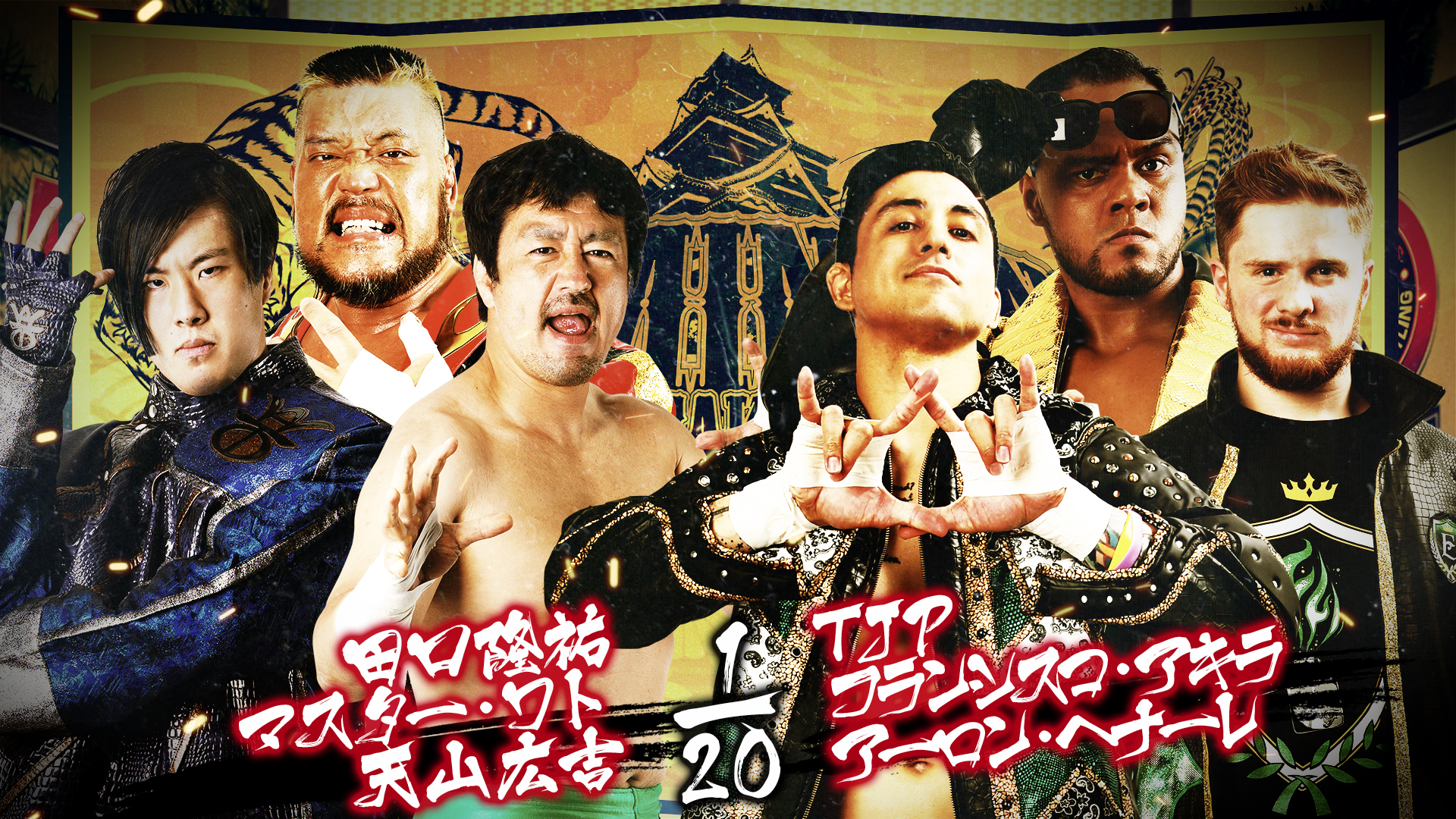 Kicking off the afternoon’s action, a six man battle will see a preivew of championship action one week later. On June 20, Francesco Akira and TJP will challenge IWGP Junior Heavyweight Tag Team Champions Team Six or Nine. Can they continue to ride a hot hand in Osaka Jo?