Hiromu speaks on his BOSJ victory

Last week, Hiromu Takahashi achieved the unprecedented, becoming the first to ever win four Best of the Super Jr. trophies, as well as three tournament wins in a row. With Dominion, as well as a homecoming event in Hachioji preceding a championship bout against Taiji Ishimori in Korakuen Hall on June 21, we spoke to Hiromu about achievements achieved and those yet to come.

Watch New Japan Road LIVE and in English on demand on NJPW World! 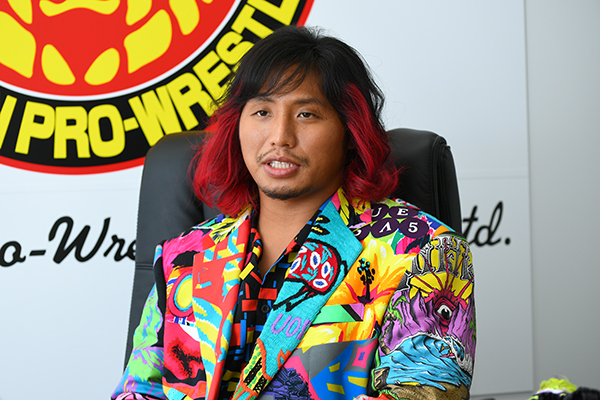 –So first of all, congratulations on winning your third successive and fourth overall BOSJ trophy.

–How does it feel, now you’ve had time to reflect on it?

Hiromu: I think the big thing is that it isn’t just three in a row, but three in an 18 month span. Then the first two times were in that weird format with World tag league at the same time, but now being able to win  BOSJ in its usual spot, it feels like this one has a lot more impact.

–You made history twice over with your win.

Hiromu: Yeah. You really can’t write me out of the history books now. I just worry that people might turn on me for it…(laughs).

Hiromu: I expected that kind of reaction to come. That was definitely in the back of my mind all the way through the tournament, for sure. 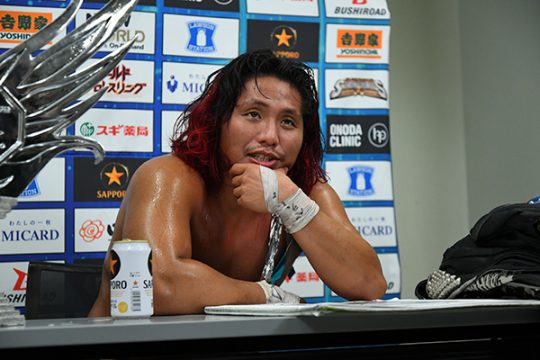 –In our pre tournament interview you were fairly accepting of the idea that people would be against you winning. It takes a lot for you to vocalise what some fans might think but not say.

Hiromu: This is the social media age, so that kind of thing gets out there, right? Some people aren’t afraid to write stuff like that for the wrestlers to see, even if it’s in reply to the official account. I think that kind of thing has really ramped up of late, a lot of stress built up with not being able to boo.

Hiromu: But I think the fans who just watch and enjoy wrestling for what it is, those are the ones that react to me winning three in a row like ‘wow, that’s amazing!’. Not the hardcore Hiromu fans, not the contrarians, just the people that think it’s cool someone’s making history. I want to thank those fans and the casual viewers, from the bottom of my heart and thank them for coming on the ride with me.

–You feel you want to win over those fans with the matches themselves.

–You said in one of your post match comments that there was nothing fun about a constantly changing top scene for the sake of it. Was that an element of personal pride there?

Hiromu: Absolutely, but I think we’re also not the kind of company who just flips the switch on who the guy is for no reason. I mean for so long Hiroshi Tanahashi was the guy even if he didn’t have the belt, right? You could even argue that right now. That’s a crucial spot, it isn’t something that gets passed round like employee of the month.

Hiromu: I feel by now that I’m about at ‘that point’. It isn’t a case of ‘if I lose to X I won’t be a top guy anymore’, because I’m not at that stage of my career anymore.

–You don’t feel one result in and of itself will effect you. Another thing you did say in your backstage comments was that El Desperado was at the top of the division, which was quite a surprising comment to hear. 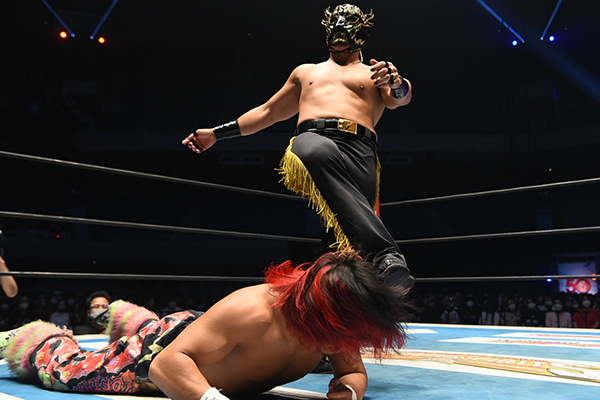 Hiromu: Well, he is, right? I think if you just watch the product, that’s pretty clear.

–In terms of his popularity? His contributions to the company?

Hiromu: Both. I think the 12 month stretch from last summer to this one, that’s really been his year.

–He really came to carry the division while you were off hurt last year.

Hiromu: If you look at the heavyweights, the big three of Okada, Tanahashi, Naito, you could argue the toss over who would be top of the top, and there really isn’t a right answer, right?

–There’s no arguments with the fact that they’re top guys with or without championships.

Hiromu: All three of them represent NJPW to the world at large. I think that’s something every wrestler needs to be aware of, and where their standing is relative to that. If you don’t know where you are, you can’t get to where you want to go.

We could have the same final year in and year out. We’re at that level 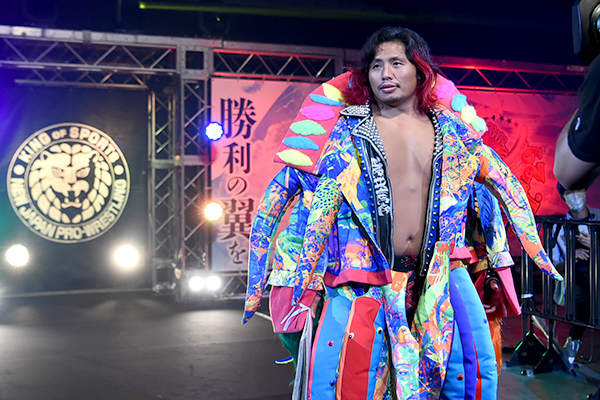 –Having said that, did you feel that the rivalry between you and Desperado was a theme in this tournament?

Hiromu: I definitely thought that the right guy made the final. To an extent, I think it was how I expected it all to happen. I had this image in the back of my mind of facing him in the finals, so as far as that’s concerned the tournament went exactly like I’d expected.

–There might have been some dissenting voices about the final, but in a real sense, with the debutants and the foreign wrestlers that were involved this year, it was almost vital for you and Desperado to be there in the final.

Hiromu: Right? It was a world class tournament. I knew that there would be some incredible guys there, and with that competition, it has to be the best that advances. We could have that exact same final every year, I feel. We’re at that level. It’s on everybody else to stop that happening.

–How do you think a SHO, or YOH, or one of the international wrestlers felt when they watched that final match? I think that’s a real fly on the wall question. 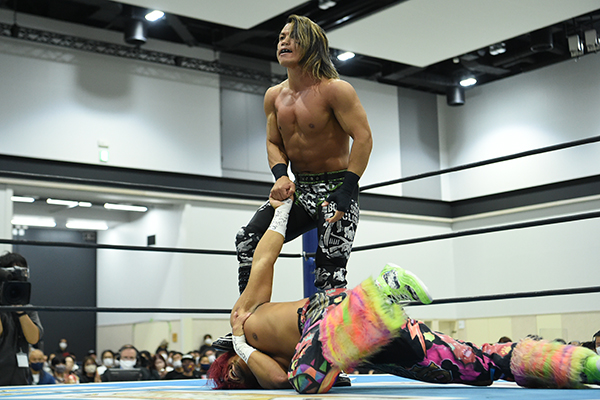 –So let’s turn our attention to June 21 and Korakuen Hall, yourself and Ishimori in the main event. During the pre BOSJ press conference, ishimori commented that there hasn’t been a definitive champion in the junior division, a position that he intends to fill.

Hiromu: He certainly would be an appropriate candidate. He really is flawless. Such a tough guy to beat, but then I have to beat him.

–You defeated Ishimori to make the BOSJ finals, but it really was by the skin of your teeth.

Hiromu: And they say I’m stubborn. I really had to make him pass out to get a win by him.

–You didn’t get that clear clean win.

Hiromu: But that’s what it took. And with this title match, he’ll be expecting (the D) and I won’t be able to get the win the same way. I just have to find a way, but I do have to win. To go through everything I did and win the trophy, it’d be a waste to end there. I can’t afford to let that happen.

–Despite your BOSJ success, you’ve been away from the belt for a while.

Hiromu: I don’t have the best of luck with that title. Since I came back from injury, I challenged twice, right? With Robbie and then Desperado. Lost both times, and I haven’t held that title in over a year. I do really want to get that thing back.

I have to do it by the end of the year.

–Kazuchika Okada has spoken about carrying NJPW through this 50th anniversary year; do you feel a responsibility to carry the junior heavyweight end of the bargain?

Hiromu: Hmmm, see I don’t really know what it means to ‘carry’ a division, or the company. Does that mean you want to be at the top of all the cards, or to do all the promotion? Both? Neither? I don’t really understand the phrasing, but I do want to boost the brand awareness of the junior heavyweight division. And yeah, I’m aware of the 50th anniversary timing, You can kind of tie in the anniversary to pretty much anything, so my top priority was especially to win BOSJ this year.

–You want the big results during the banner year.

Hiromu: Exactly. So I need to win the title by the end of the year as well. I do think of myself as the top junior, and I need that title to do what I want to do with it.

–But win lose or draw, we have to agree that BOSJ was a big success.

Hiromu: It was amazing! The pandemic still isn’t completely behind us, but we were able to have the foreign wrestlers, and Lindaman from GLEAT. That benefitted them, and it benefitted us. That competition it bred was incredible for us wrestlers.

–And for the fans.

Hiromu: I loved the matches I had, and I loved watching the others wrestle too. I knew I couldn’t lose out to anyone in the lineup, and that help me work all the harder every night.