AEW and NJPW combine for an unprecedented landmark event on June 26. Forbidden Door will see the best of both promotions competing in Chicago’s United Center, live on PPV and Bleacher Report live in the States, NJPW World in Japan and FITE internationally. 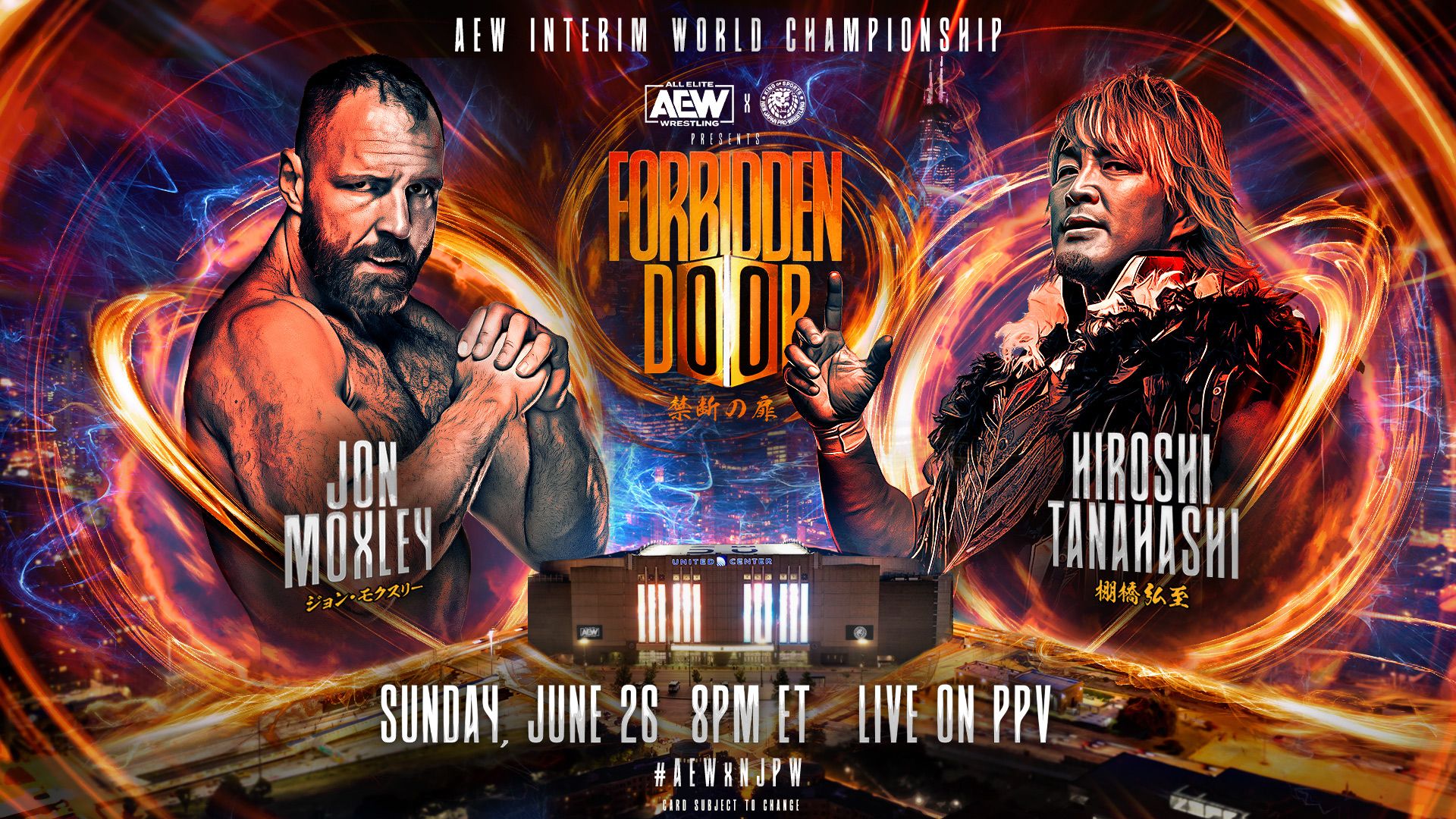 The Interim AEW Championship will be decided between Jon Moxley and Hiroshi Tanahashi at the United Center Sunday. When Jon Moxley first stepped into an NJPW ring in the summer of 2019, it was with designs on eventually wrestling the Ace of NJPW, Moxley having been inspired by Tanahashi’s battels with Minoru Suzuki in years past. As a result Moxley has declared that Tanahashi has been ‘ducking’ him these past three years, but the Ace argues that it’s taken this long for Mox to come to his level.

What was initially going to be a challenge for Tanahashi to AEW World Champion CM Punk was put on ice when Punk revealed a lower leg injury, but the result has been a fated encounter finally put into reality. The two foremost representatives of each promotion, there is no doubt that this is a fitting match to symbolise the Forbidden Door itself. Will Moxley, already the second AEW World Champion, once again bear the All Elite standard as he awaits the return of the ‘best in the world’, or will it be Tanahashi taking AEW gold to NJPW? 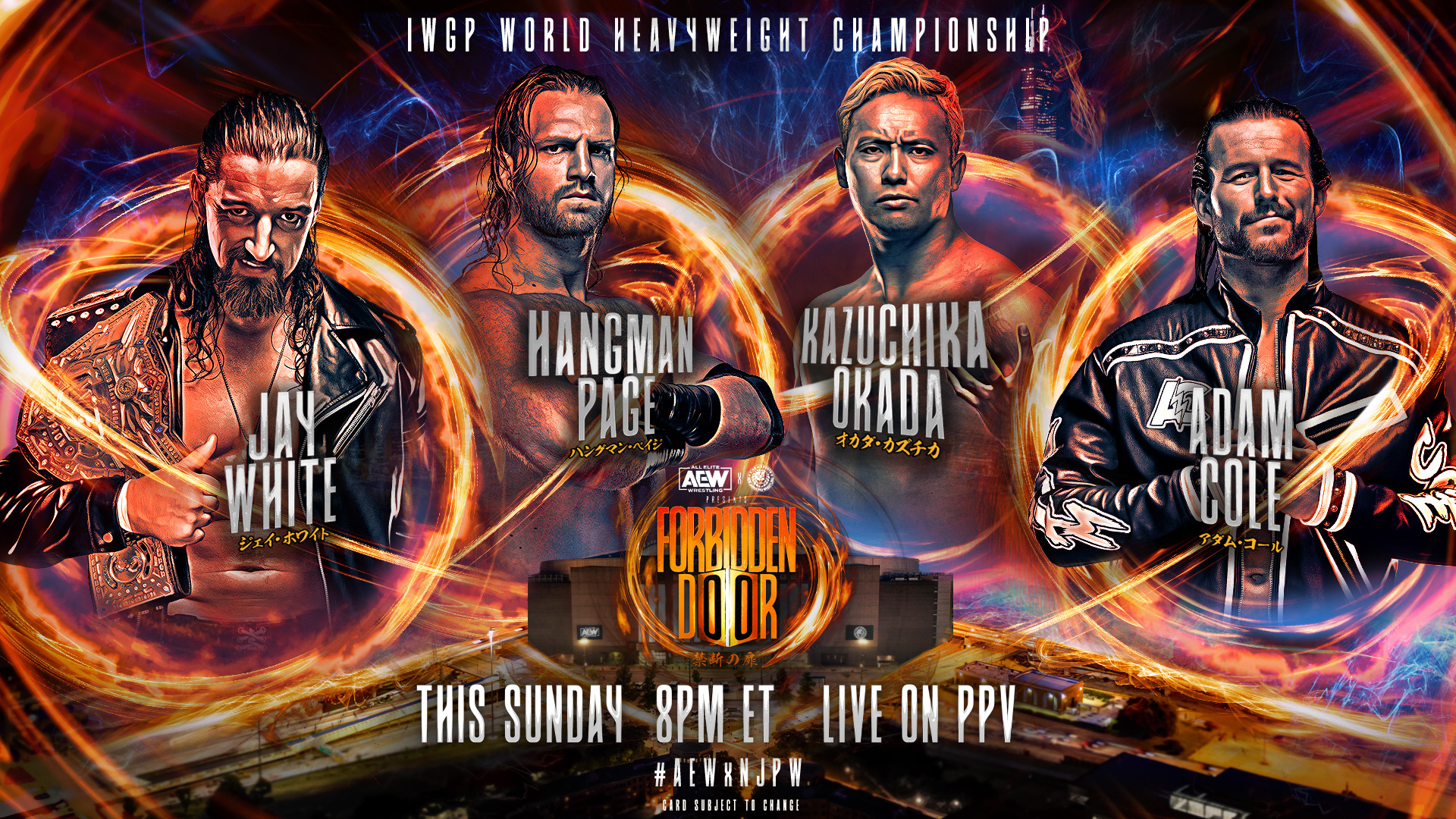 The IWGP World Heavyweight Championship will be on the line when Jay White defends his title for the first time against a trio of challengers, Hangman Page, Adam Cole and Kazuchika Okada all seeking to take the gold. Kazuchika Okada was still wearing IWGP World Heavyweight gold when Hangman Page issued a challenge several weeks ago, a challenge that Adam Cole was quick to rebuff. Yet when Switchblade Jay White took the gold at Dominion in Osaka Jo Hall, he would state that neither Adam would take him on for the gold.

The issues between the three men came to a head Wednesday on AEW Dynamite. Cole was almost caught red handed looking to take Jay White’s head off with the IWGP World Heavyweight Championship, and as tensions continued to build, a famous coin drop was heard on TBS. Kazuchika Okada would hit the ring to Page’s aid, yet he won’t be the Hangman’s ally in Chicago. Can Okada regain his IWGP gold? Will the Catalyst of Professional Wrestling be carrying the gold into G1 Climax? Or might NJPW’s richest prize be falling into AEW hands? 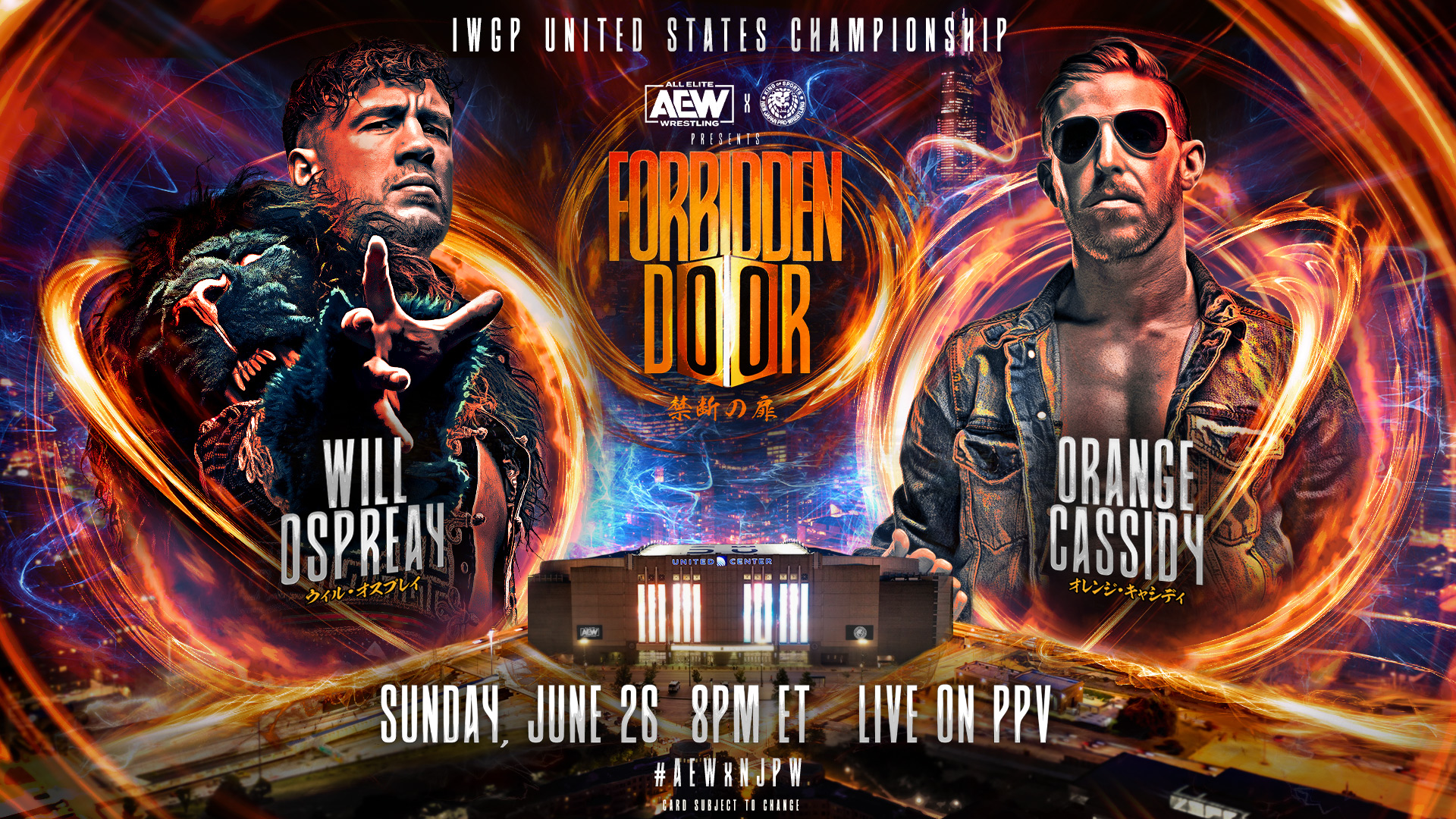 The IWGP United States Championship will be on the line when Will Ospreay takes on Orange Cassidy. Ever since Great-O-Khan and Jeff Cobb took down Rocky Romero and Trent Beretta some weeks ago on Dynamite, United Empire has had issues with the Best Friends wing of CHAOS, and last week, Cassidy returned to AEW to stand off against the US Champion. Ospreay would be well advised not to look past the calm and collected Cassidy, and with the champion still furious at not being in possession of the physical IWGP US belt, he might well lose his cool; should he do so, the red and gold might be in AEW clutches once again. 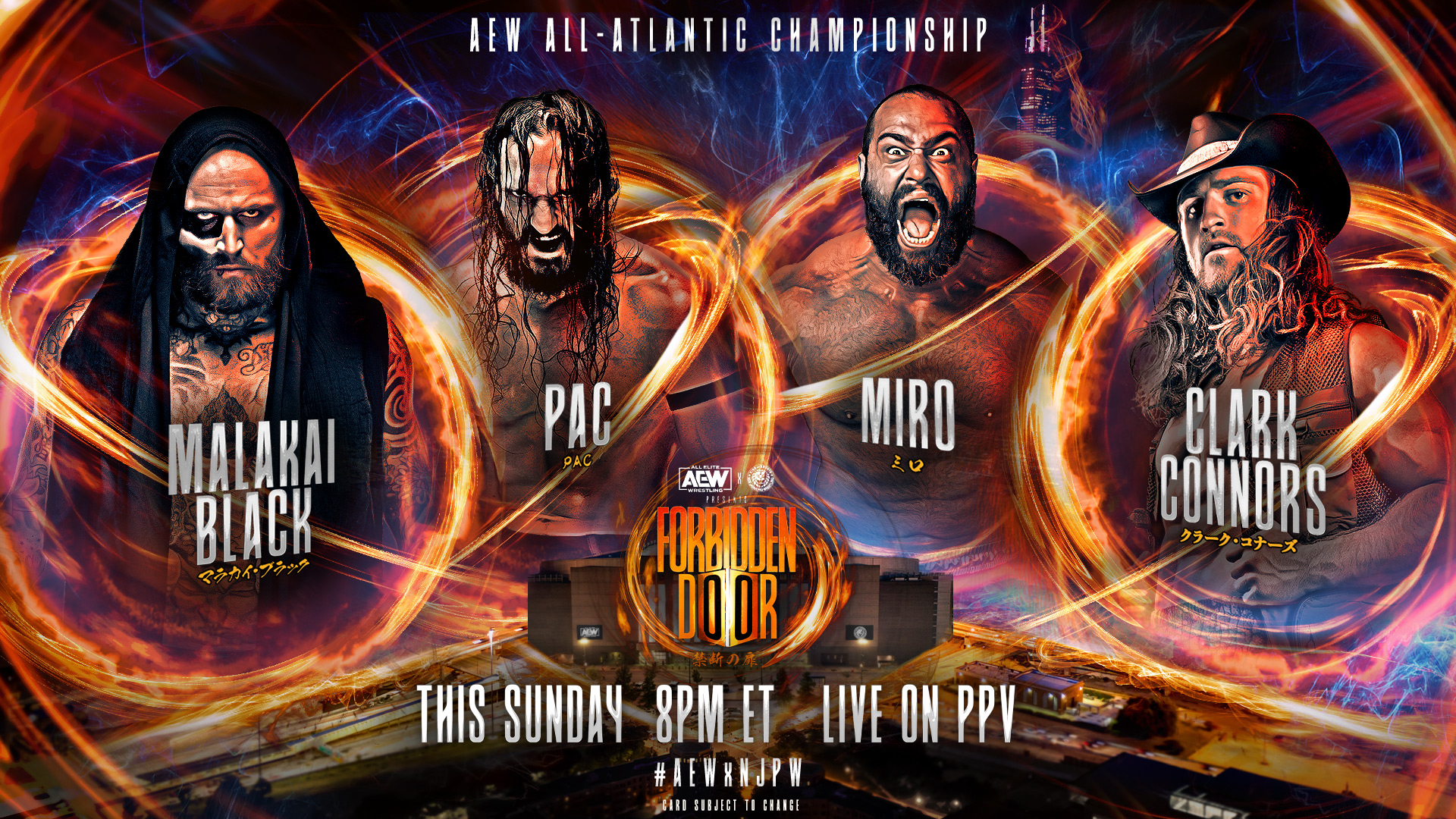 A four way match will determine the first AEW All Atlantic Champion at Forbidden Door. Having defeated Clark Connors in a war at Korakuen Hall this past week, Tomohiro Ishii was set to represent NJPW before injuries sustained at the hands of Yoshinobu Kanemaru and Clark Connors proved too much. Now, after pushing Ishii to the limit in Korakuen Hall, Connors has the opportunity of a lifetime as he faces Malakai Black, PAC and Miro. All four men want to make history as the first champion, but can Connors take AEW’s newest belt back with him to Japan and New Japan Road next week? 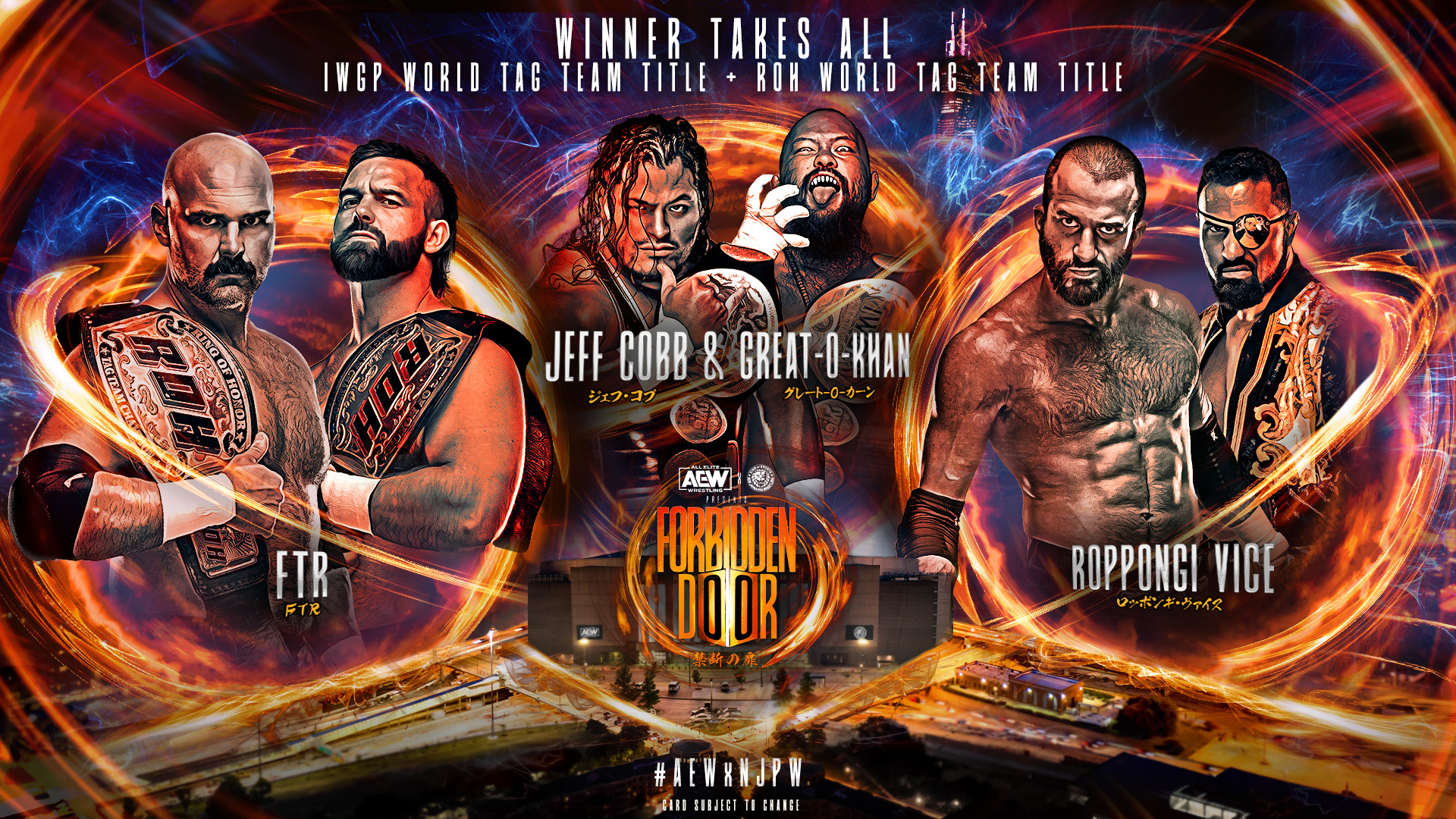 After attacks on both sides of the Pacific, three teams meet for two titles in one match at Forbidden Door. ROH Tag Team Champions FTR were defending their gold against the freshly reunited Roppongi Vice last month in Las Vegas when Jeff Cobb and Great-O-Khan made United Empire’s first AEW appearance, taking out both teams and staking a claim to the ROH belts. Weeks later, and O-Khan and Cobb would reclaim IWGP Tag Team gold at Dominion, just 96 hours removed from Aussie Open and Will Ospreay targeting Dax, Cash and Trent Beretta on Dynamite. That led Rocky Romero to try and get some physical revenge on the newly crowned champions, only to be swiftly turned away. Now, this one fall three way battle will see a team walk out with both sets of tag titles. With what team, and what company will the gold lie after the dust settles? 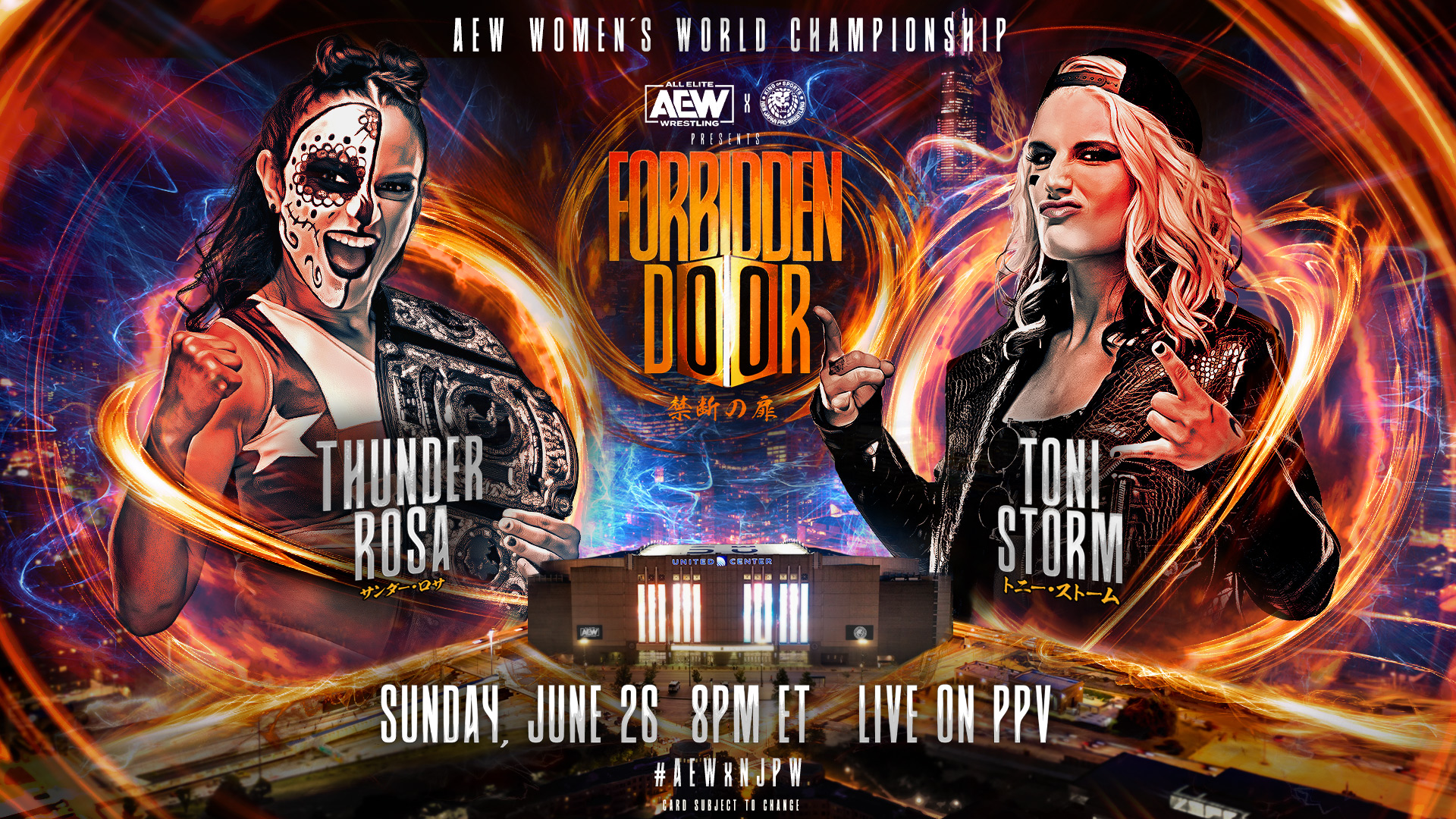 AEW’s World Women’s Championship will be on the line when Thunder Rosa takes on the challenging Toni Storm. After deposing Britt Baker as champion in a steel cage back in March, Rosa’s reign has gone from strength to strength, but Storm might present her stiffest challenge to date. An impressive career in NJPW’s sister promotion STARDOM saw Storm to Cinderella Tournament and 5☆Grand Prix victories, as well as the World of STARDOM Championship. Will the AEW World title be next? 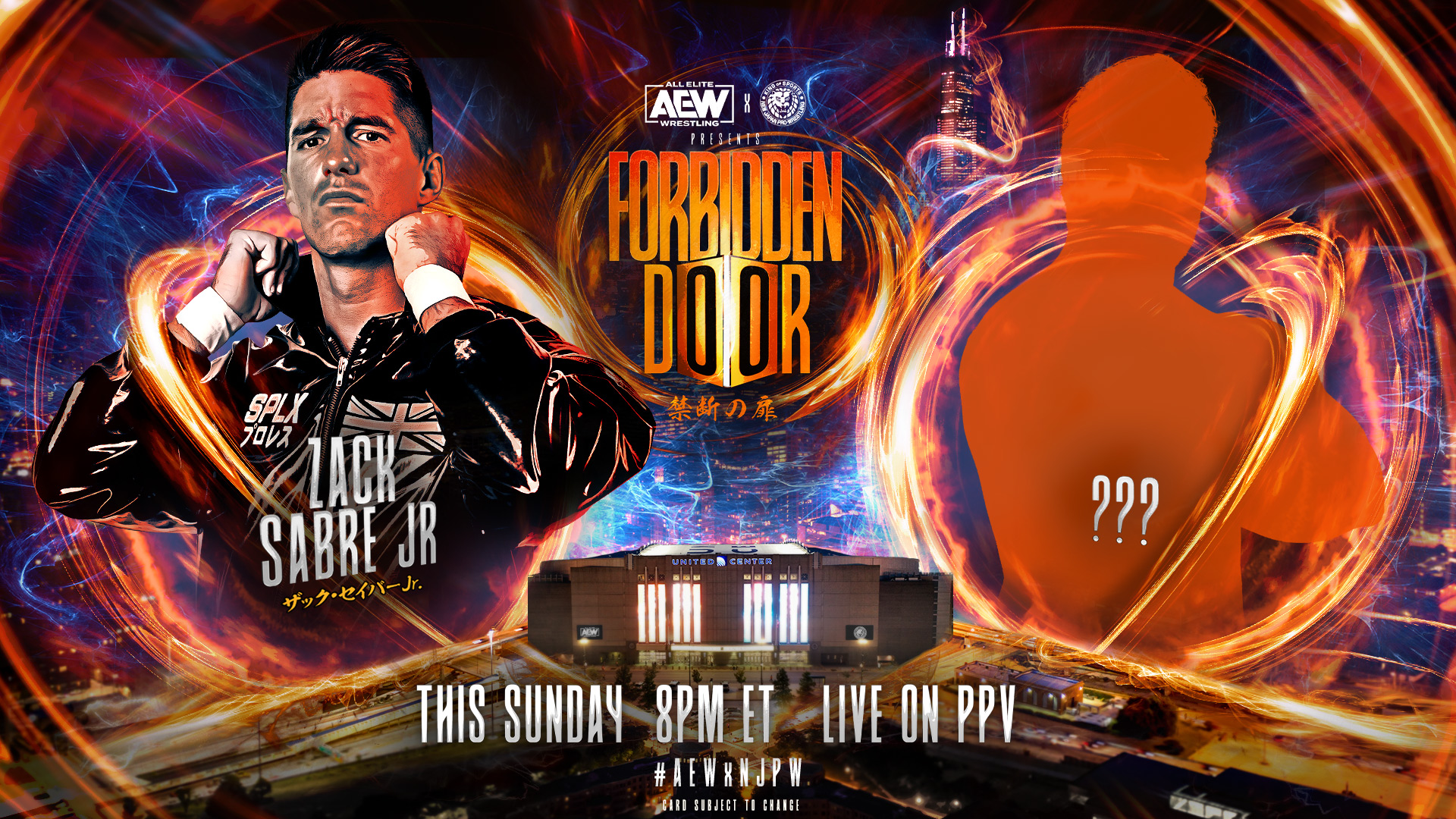 Ever since G1 Climax 31, where Zack Sabre Jr. got revenge 12 years in the making for a loss to the Dragon in Germany early in his career, Zack Sabre Jr. has been calling out another figure from that night in Bryan Danielson. The British Submission master has been frequently regarded as the best technical wrestler in the world, a claim Danielson has strongly disputed. When Sabre directly called out the American Dragon at Dominion, it seemed as if a dream match was finally made, but injury has sadly deprived both ZSJ and the fans.

Yet when Danielson delivered the bad news of his absence, he also made the promise of a replacement, a hand picked substitution that was, in his own words, the only man to rival him in terms of technical ability. The promise was that this will be every bit a dream technical masterclass as Danielson and Sare would be; just who will step through the curtain for this singles clash? 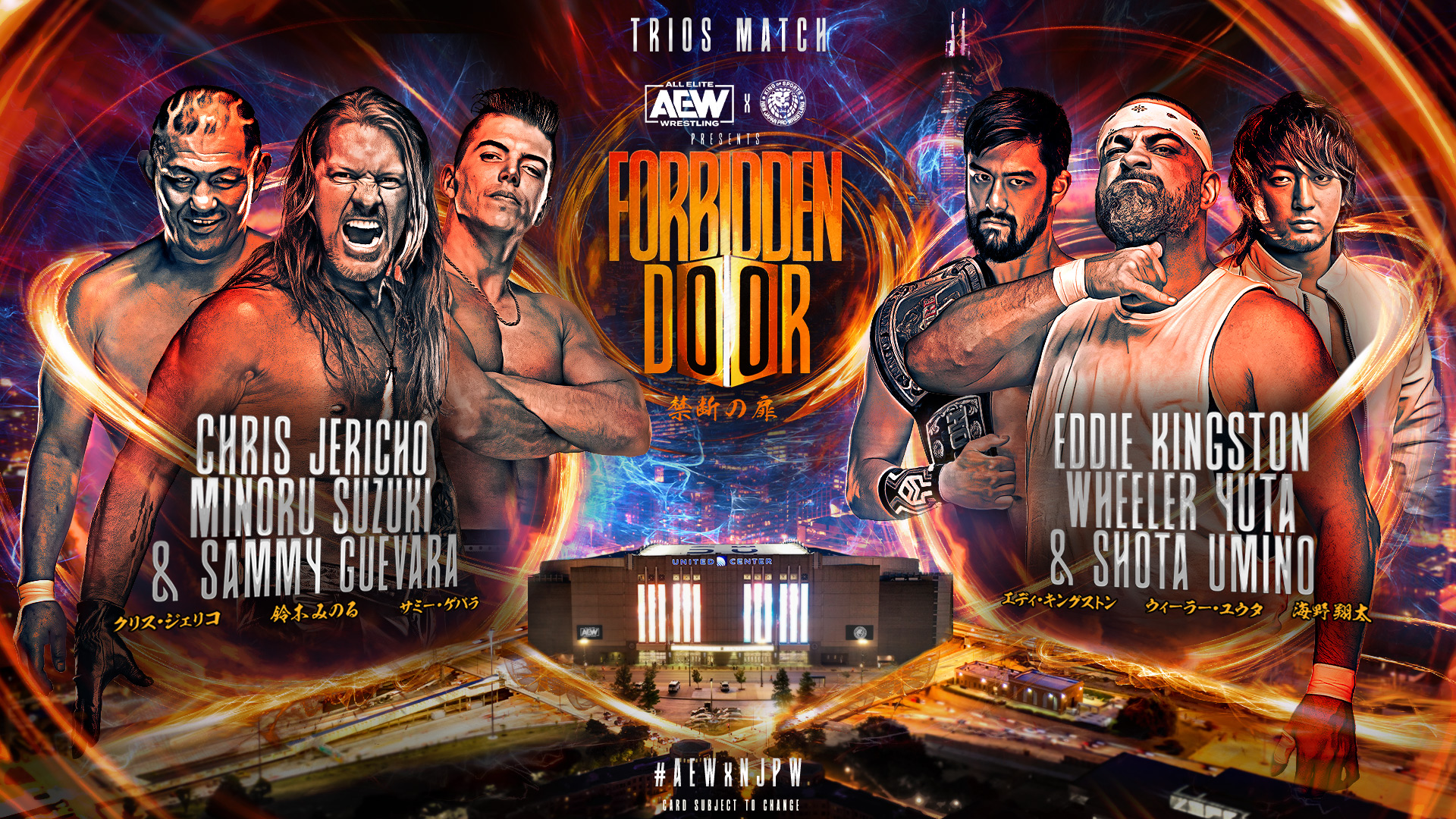 A six man bout will see Suzuki-Gun and the Jericho Appreciation Society align, as Sammy Guevera and Minoru Suzuki team with Chris Jericho to team against Eddie Kingston, Wheeler Yuta and Shota Umino. Jericho’s hatred for Eddie Kingston and the Blackpool Combat Club will see them meet in a Blood and Guts match on June 29; before that sadistic environment, Jericho has recruited wrestling’s ultimate sadist in the King tonight.

In the opposite corner, Kingston will team with a pair of young prospects. Wheeler Yuta and Shota Umino have both been taken under Moxley’s wing, and will need to use every ugly tactic they’ve learned in his guidance to take down a terrifying combination of youth and experience in their opposition. 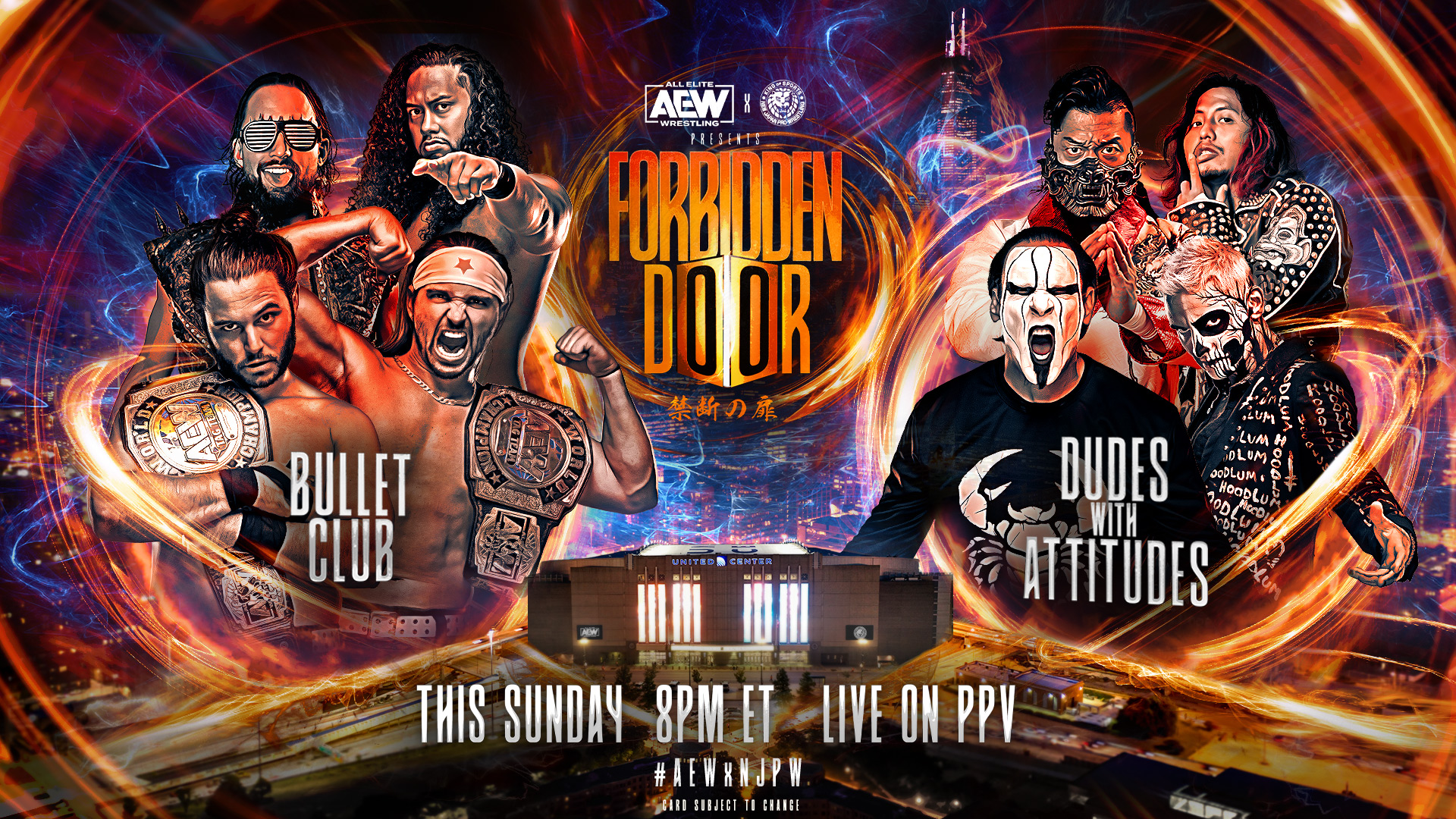 A unique eight man tag team match will see Sting and Darby Allin team up with Shingo Takagi and Hiromu Takahashi to face a BULLET CLUB side of El Phantasmo, Hikuleo and the Young Bucks, who rejoin the club for one night only. Sting recently made his return to AEW programming to rejoin Darby Allin’s side and be a thorn in that of the Undisputed Elite, prompting the Bucks to seek some impressive backup. Hikuleo will provide huge muscle to his quartet, while El Phantasmo is on the verge of his first G1 Climax, and certainly aligns with the Bucks’ combination of unbelievable athleticism and ability, and incorrigible attitude.

On the other side of the ring, the enigmatic daredevil Allin could likely find much in common with the mentality of Hiromu Takahashi, while you can’t talk about ‘muscle’ without bringing up Shingo Takagi. While the team name might evoke Sting’s squad that faced the Four Horsemen many moons ago, perhaps Sting and Allin could be considered at least honorary members of LIJ for the night. Los Stingobernables De Japon mayhaps? 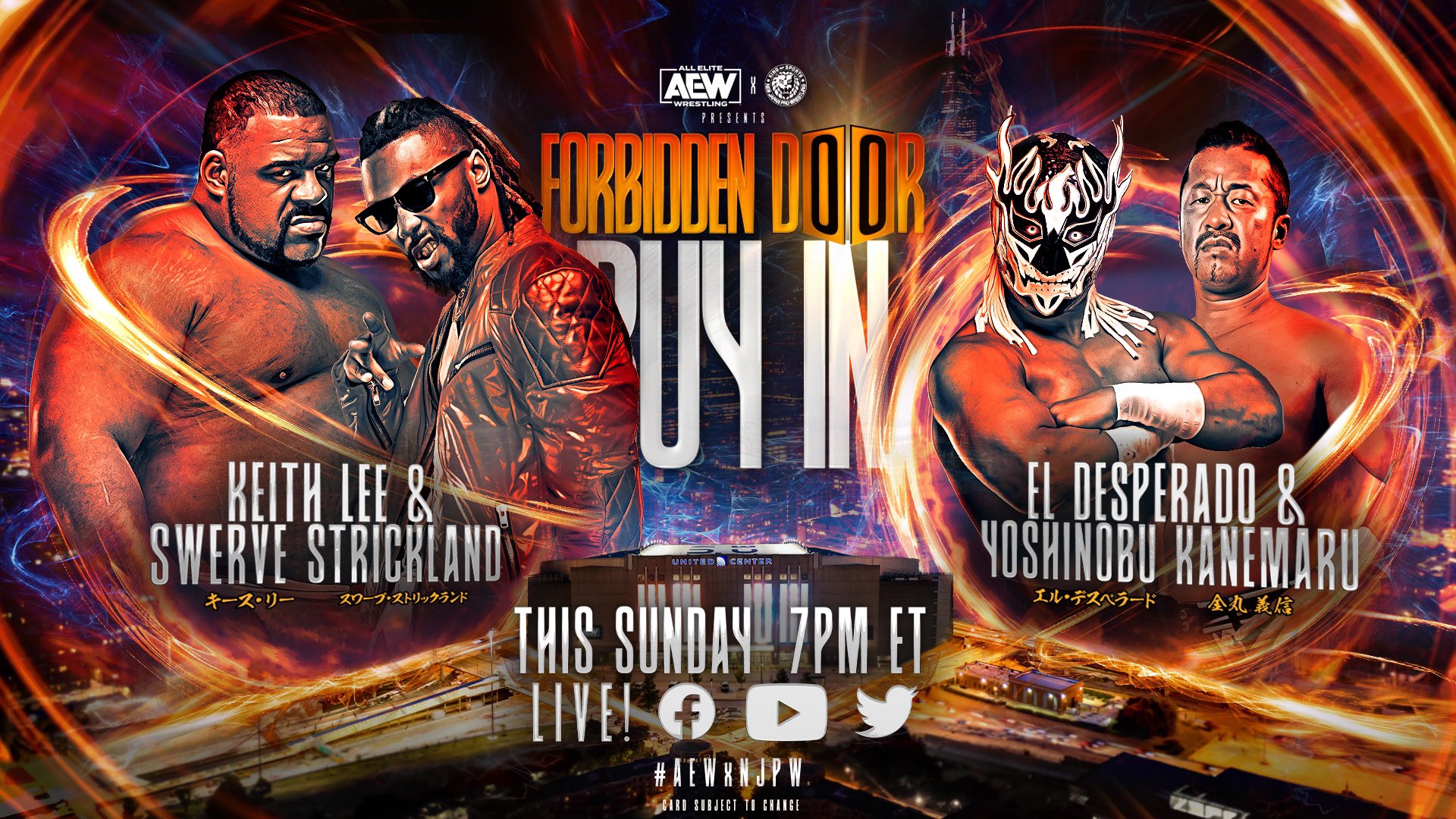 Swerve Strickland and Keith Lee will be taking on El Desperado and Yoshinobu Kanemaru during the Buy-In. The former four time IWGP Junior Heavyweight Tag Team Champions have achieved phenomenal success on the back of fluid teamwork and resolute solidarity in ring. In contrast, Swerve and Keith Lee could truly be a ‘Limitless’ combination, but for a distinct lack of effective communication in recent weeks ever since Swerve eliminated Lee in the AEW Interim qualifying Battle Royal. Can they mend fences against Suzuki-Gun? 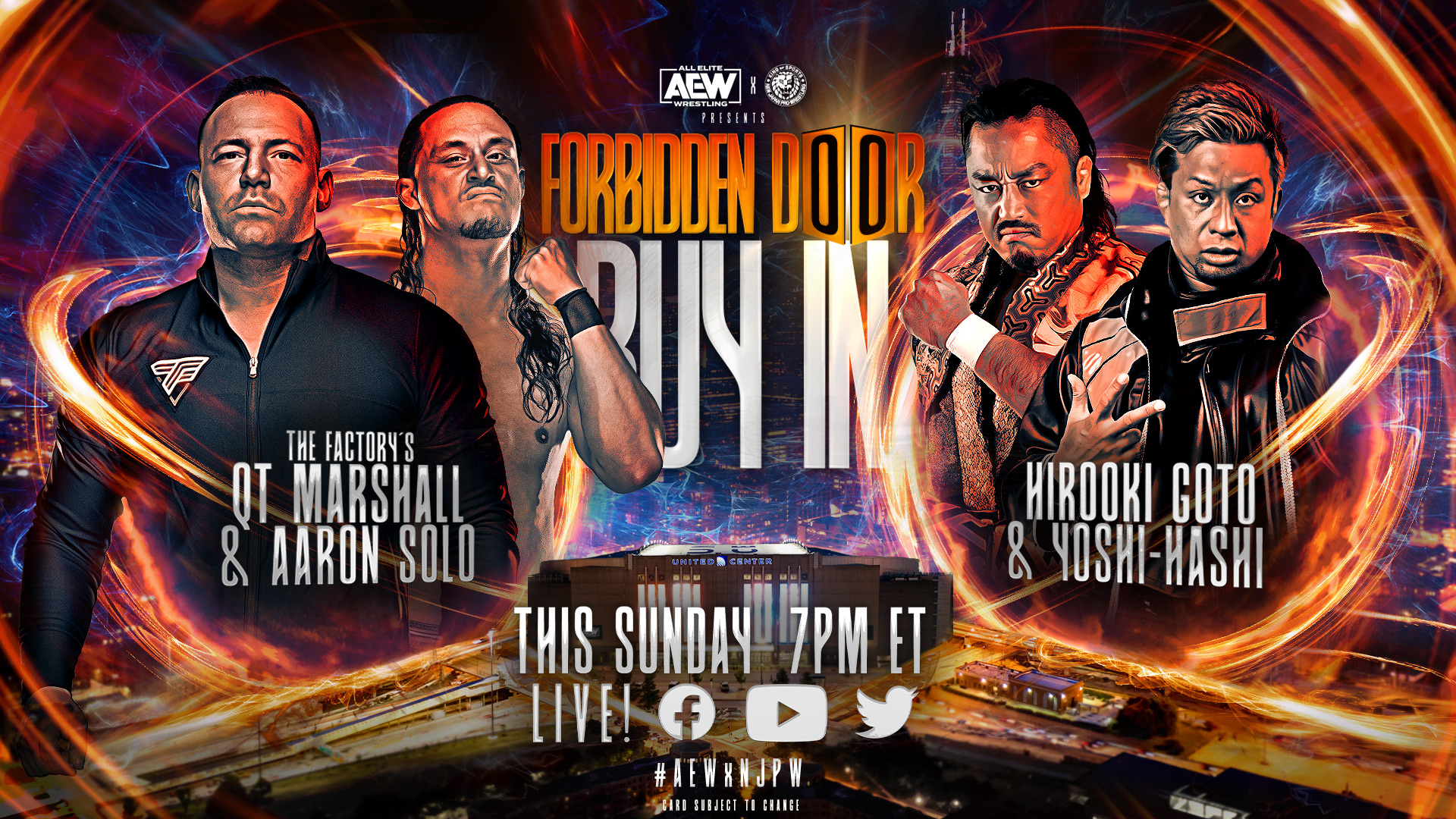 Former IWGP Tag Team Champions Bishamon will face QT Marshall and Aaron Solo of the Factory. Marshall and company have been a consistent thorn in the side of the LA Dojo, with a feud playing out over several weeks on NJPW STRONG and AEW Dark. Tonight though, Marshall and Solo will take on a pair of former tag team champions; can Hirooki Goto and YOSHI-HASHI make a statement on behalf of NJPW? 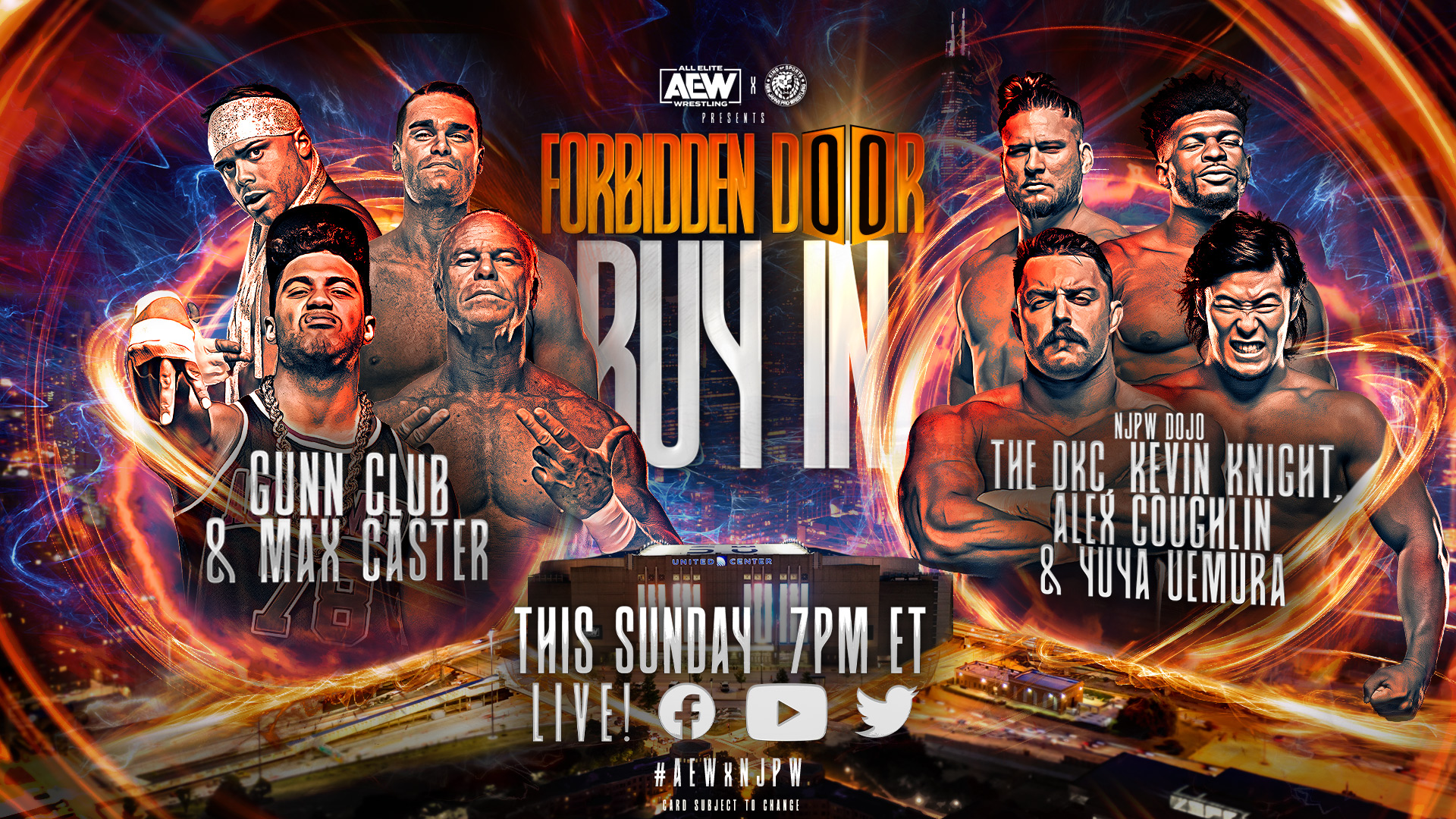 To kick off your Forbidden Door evening, tune into the Buy-In on YouTube and social media one hour before bel. The LA Dojo team of Yuya Uemura, Kevin Knight, Alexc Coughlin and the DKC will be looking to make a statement against Max Caster and the Gunn Club, headed up by the veteran Billy Gunn himself!