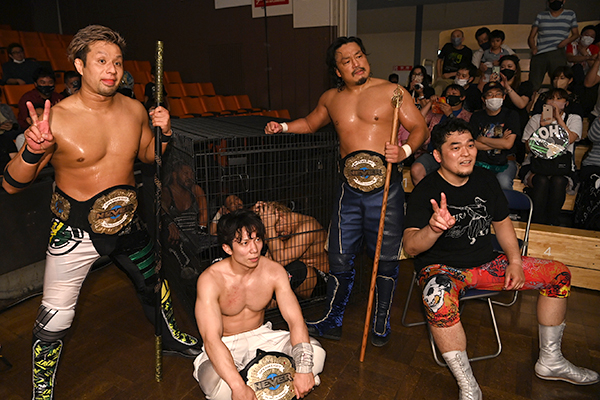 The main event in Korakuen Hall on July 5 would see the NEVER Openweight 6 Man Tag team Championships at stake between HOUSE OF TORTURE and CHAOS. Before the title bout though, a Dog Cage Match would prove crucial for both sides, as Toru Yano and Dick Togo would do battle in an attempt to ensure the other could not get involved in proceedings when YOH, YOSHI-HASHI and Hirooki Goto challenged EVIL, SHO and Yujiro Takahashi. 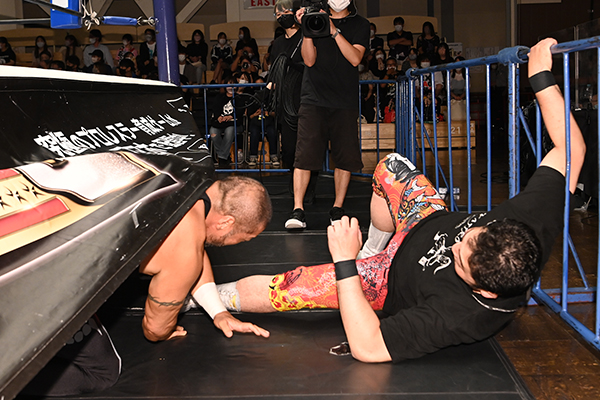 In a change to the rules that Toru Yano and Minoru Suzuki wrestled under in their Dog Cage Match in February, the key to the cage padlock was kept around the neck of referee Marty Asami and had to be obtained bevfore use. Togo was first to take the key, but it would switch owner as first Yano dropped Togo with the corner pad, and then the CHAOS member was reversed into the guardrails. Yano would eventually open the cage, only to find his opponent had disappeared. 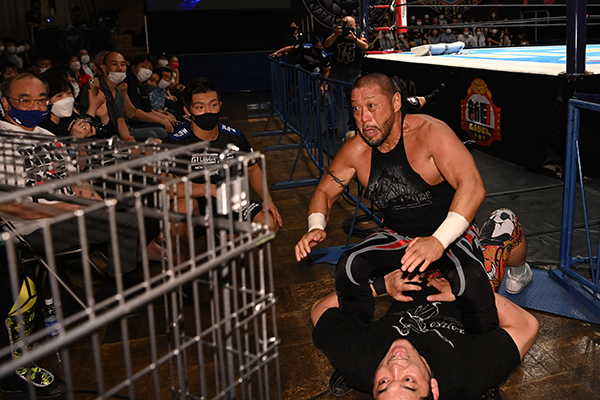 Yano’s search would come to an end when Togo grabbed the master producer from underneath the ring. Yano tried to turn the tables to no avail, and when he got his hands on the Spoiler’s choking wire, he would find the arena plunged into darkness, HOUSE OF TORTURE seeing to it that Togo would apply the choker to his opponent. That prompted the CHAOS challengers to hit the ring and save Yano from certain incarceration; reacting to the situation with expert awareness, Yano slingshotted Togo into the cage, keeping him at bay for the ensuing main event. 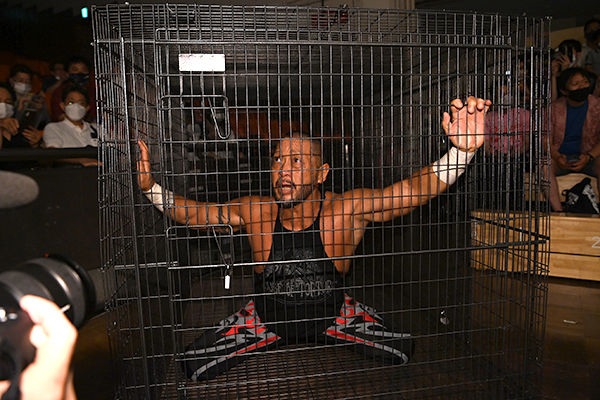 YOH would start the bout in the plus position, targeting SHO and scoring two from a half hatch suplex. EVIL would turn the tables with a chair from the floor however, and HOUSE OF TORTURE would separate the junior heavyweight from his Bishamon partners. An exposed turnbuckle and heavy offense did their damage, but basement dropkicks created distance, and YOH was able to bring in YOSHI-HASHI. 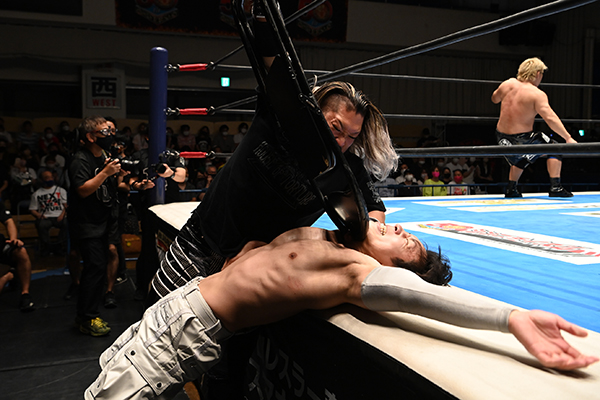 SHO and Yujiro were able to expertly stall Bishamon’s momentum, and created a chance for EVIL to get two on a Fisherman’s Buster, but CHAOS was able to respond, and a top rope version of the Goto Goto Hunter secured two for the challengers. As YOH took out Yujiro on the floor, Goto and YOSHI-HASHI looked for Shoto, but would be struck with a low blow as EVIL took out the referee.

Takahashi responded by flattening Yano, and taking the dog cage key from around the Producer’s neck. With Togo freed, and Goto floored with Darkness Falls, things looked bleak for the challengers, but the Fierce Warrior was able to summon Ushigoroshi, and brought in YOH to acccelerate the pace. 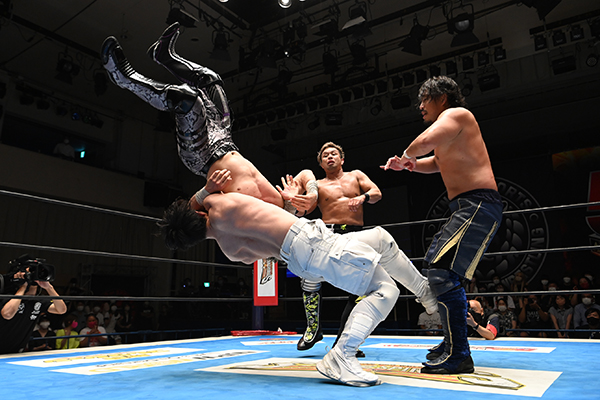 Going eye for eye and bite for bite, YOH chomped on the thumb of SHO as he tried to escape his clutches, and got two from a Falcon Arrow. SHO’s natural toughness showed with an impressive German suplex, but YOH fired back with a massive lariat, and a Dragon Suplex that got a near two. A superkick landed right on the button and seemed sure to get victory for CHAOS, but Togo pulled the referee out of the ring before shutting Goto and YOSHI-HASHI in the dog cage, leaving YOH in a one on four handicap situation.

YOH was drilled with Pimp Juice, but just as the champions closed on their fifth defence, a rattling from the cage and a bustle from the crowd revealed that Yano had a spare key in his tights all along. CHAOS freed themselves and Yano shut H.O.T in the cage, putting SHO at a numbers disadvantage, and down to the mat with GYR. The Violent Flash would lead to DNV from YOH, and then an elevated Direct Drive saw new champions crowned. 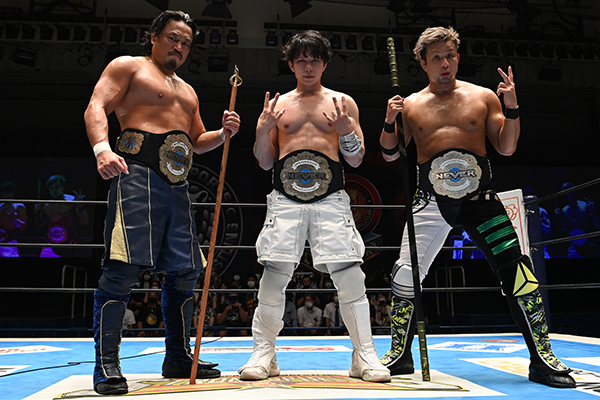