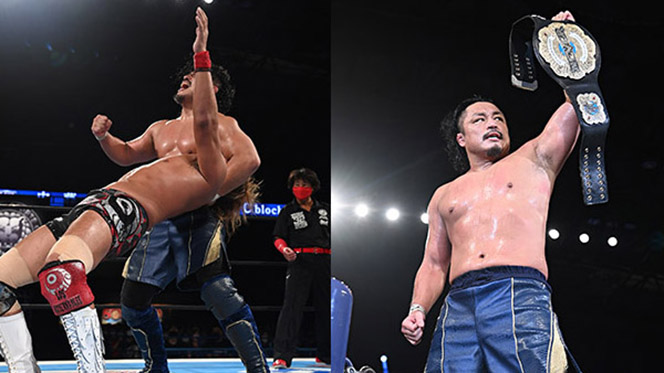 The G1 Climax 32 tour rolled onto Sendai on July 20 for night three of the tour in the Xebio Arena. 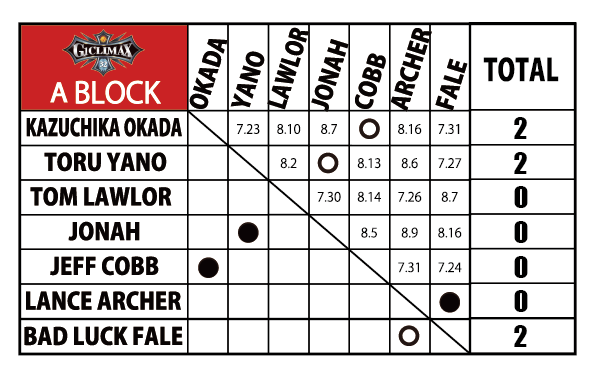 A Block would be in the semi main event position in Sendai, with the first goliath clash of two superheavyweights in the tournament. Fale would try and get the jump with a Bad Luck Fall attempt on Archer as he made his entrance, but would have to deal with heavy pressure outside of the ring instead; at least until a massive high velocity shot into the guardrails.  Angered as Archer put him under pressure, Fale would grab multiple chairs much to the chagrin of referee Red Shoes Unno. Eventually able to slam the former IWGP US champion onto two of the chairs, Fale nearly picked up the victory via countout, but Archer would rally in spectacular form. 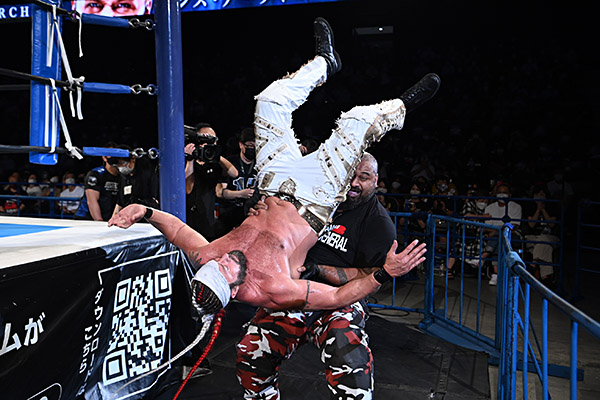 Archer would follow a high flying attack with an attempt at Old School, but was countered and crotched by Fale, who had designs on a second rope splash, but was met by a high knee. Muscling Fale up, Archer nearly hit Blackout, and though the attempt was defused, a head scissors out to the floor was followed by a cannonball senton from the apron that wowed the crowd. It appeared as if Archer had the match in hand, but as the two battled outside, Unno’s count was progressing; Fale would eventually roll back in at 19 and hand Archer the countout loss. 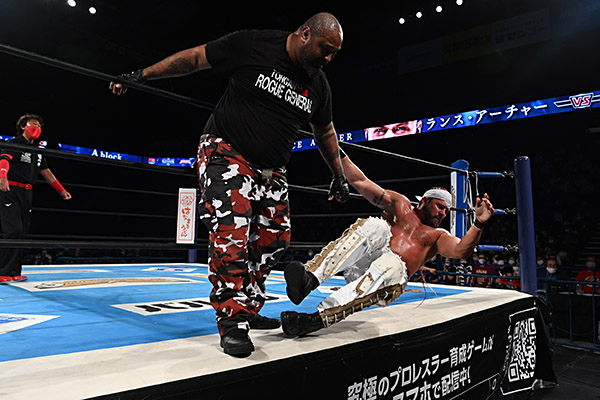 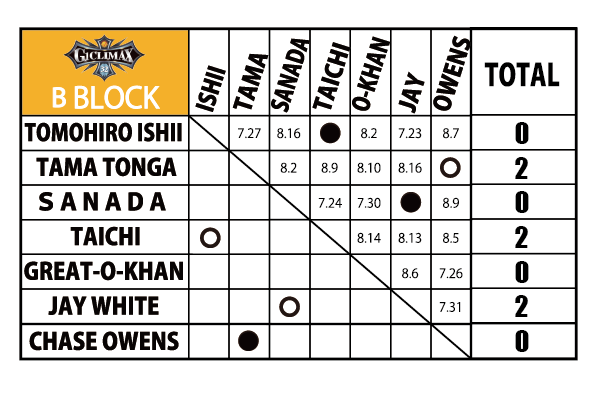 In B Block, Tama Tonga wasted no time in going straight for Chase Owens, taking out his former BULLET CLUB ally and sending him into the lights with a back body drop. The crafty Owens would bail to the floor and superkick Jado at ringside to draw Tonga off his game; a pull off the apron and shot into the guardrails soon followed to take over. Owens struck in effective combination until a wild lariat out of the corner from Tonga, but Owens would plant him into the opposite corner pad with a snap sunset buckle bomb. Rallying, Tama would land the SRC and went for Supreme Flow, but only found empty canvas; Tama struggled to get back into the match until Jado came through with a big assist. 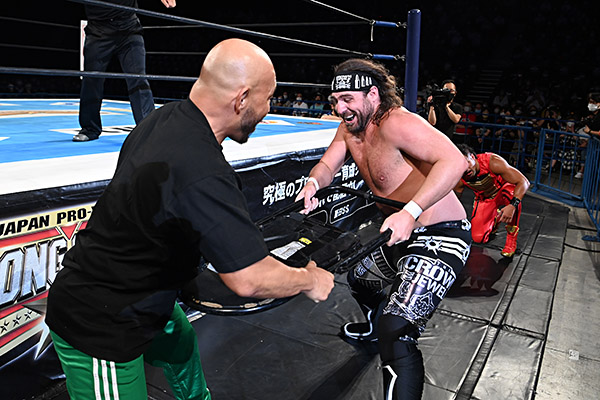 Owens would roll outside and remove the ringside mats to try and piledrive Tonga onto concrete. Jado would get involved, putting the mats back, and disarming Owens of a chair as Tama fought his way back in, and landed Supreme Flow for two. Owens would fire back with C Trigger for a nearfall of his own, and constantly had a counter in store for the Gunstun, but the dogged Tonga would eventually send his foe into the exposed steel turnbuckle and landed the Gunstun for the three. 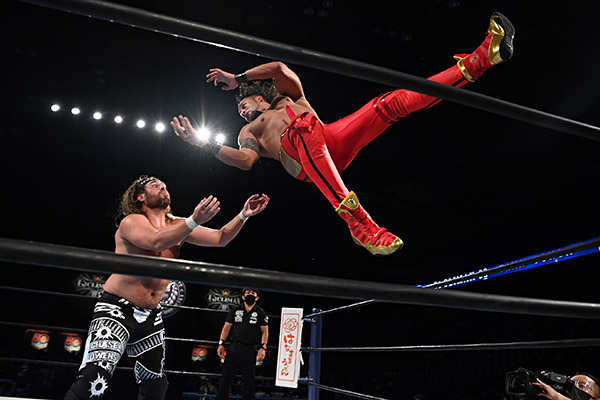 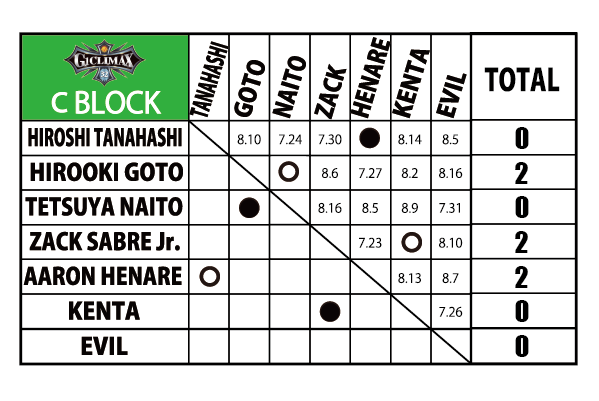 Breaking a BULLET CLUB theme through the night was a C Block main event between Hirooki Goto and Tetsuya Naito, two familiar foes evenly matches at the start of the match before Goto brought the pace with a lariat and hip toss, Naito having to scramble outside for space. Rolling in and out to frustrate his for, Naito got into Goto’s head enough to have the CHAOS member follow outside. There El Ingobernable took control, seeing Goto’s right arm and shoulder, hurt during the preview tag matches, into the ringpost and guardrails. 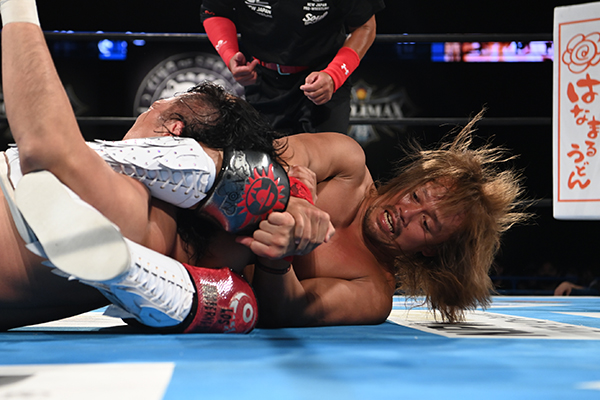 As the match passed ten minutes, Goto dug down and withstood the pain in his right arm to land a lariat and elbows with his dominant hand, before switching sides for a signature bulldog that got two out of the referee. Regardless, his break was a brief one. Naito regained control with a leg Nelson, and stayed there, a top rope Frankensteiner seeing Goto reeling, all into a spinebuster. 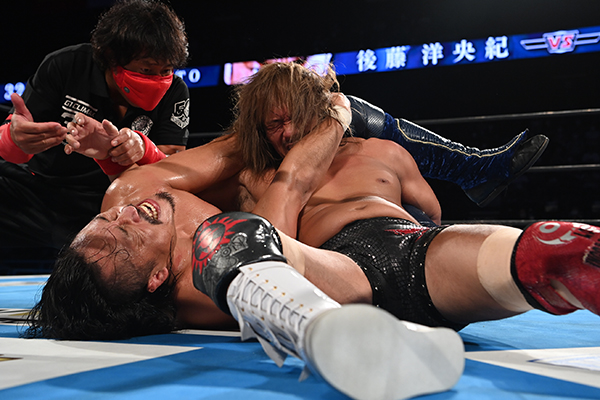 Goto would keep alive, countering the ensuing Destino attempt with the Shoryu Kekkai and pulling Naito’s neck deep into his chest. Naito would struggle to the ropes at the 15 minute mark with clear damage done, and his back elbows to the neck were soon cut off by Goto who clutched the wrist into the Hell’s Wheel suplex for two. Ushigoroshi followed for another two as Naito struggled badly, but now El Ingobernable launched himself effectively off the back foot with a compo kick, flying forearm and running Destino.

Goto resisted Valentia though, and managed a one man Shoto into the corner before GTW nearly brought him to victory. Immediately following up, Goto wanted GTR but was denied with a crunching Valentia; still Goto was just able to counter Naito’s finishing Destino attempt, and land the Shoten Kai before GTr for the victory. 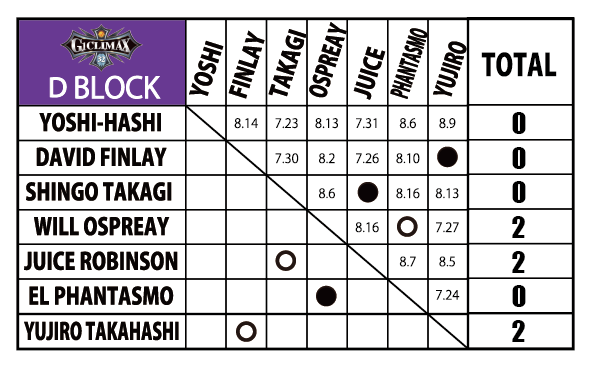 D Block would start the night’s league action, with David Finlay taking on Yujiro Takahashi. Finlay frustrated Yujiro on the mat and Takahashi responded outside, landing a reverse DDT on the concrete. The move would put Takahashi in the driver’s seat until Finlay landed a backdrop suplex and then nipped up to connect with a plancha to the floor. 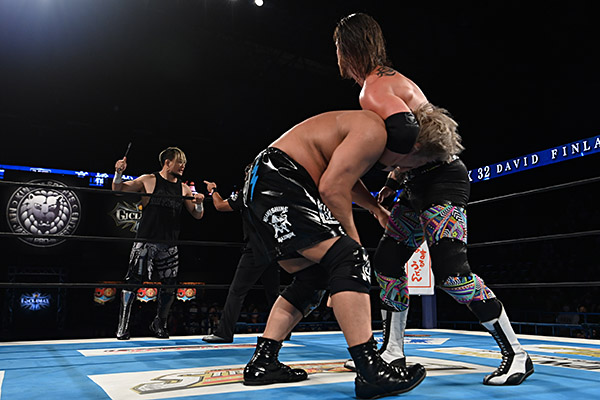 As Finlay accelerated in intensity, a sunset flip powerbomb netted a nearfall at the ten minute mark. Finlay set up for Trash panda, but was distracted by SHO’s sudden appearance at ringside. Takahashi quickly capitalised with the Intercollegiate Slam and went for his pimp stick; as the referee had his hands full, Yujiro landed a low blow and Pimp Juice, but Finlay was just able to kick out as the crowd came alive. Shoving Yujiro into SHO, Finlay got two from Prima Nocta; a series of pinfall counters saw Finlay try for an O’Connor Roll, but ‘The Rebel’ was shoved into SHO and his wrench, leading to Big Juice and the pinfall.

The G1 continues on Saturday July 23 in Ota, where A Block will see Kazuchika Okada face Toru Yano, Tomohiro Ishii and Jay White meet in B Block, Zack Sabre Jr. and Aaron Henare do battle in C, and D Block sees Shingo Takagi take on YOSHI-HASHI.