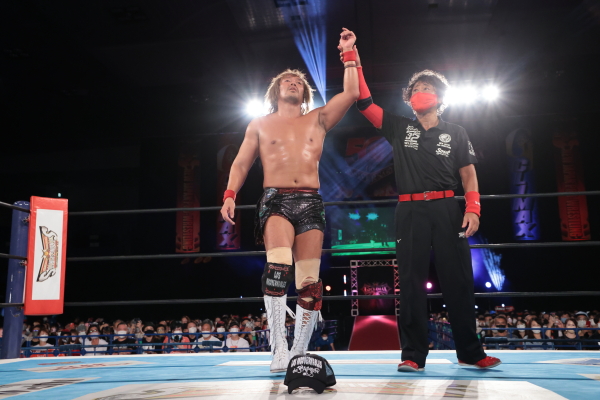 The second of two days in Aichi saw five league matches in G1 Climax 32, as the pace of action increases in the second half of the league phase. 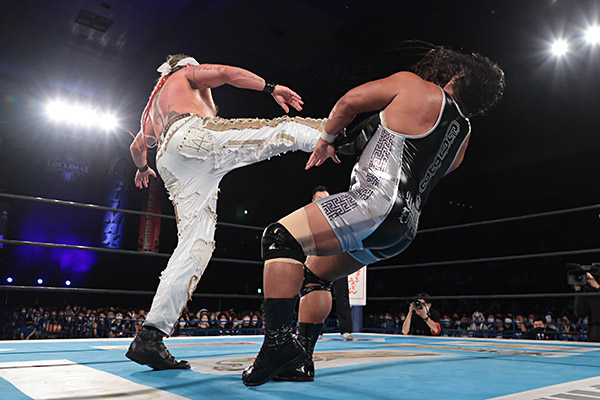 As a result of the busier schedule, it would be A Block that saw double duty, with Jeff Cobb taking on Lance Archer first. Power was met with athleticism in spades, with Cobb getting an advantage as he caught Old School with an Athletic Plex before surfing on the Murderhark Monster, but Archer would catch a Tour of the Islands attempt with a massive DDT.

Archer countered a second attempt with a Pounce, and landed a Black Hole Slam, but the tenacious Cobb was able to kick out of a big chokeslam. The Suzuki-Gun member teased Blackout, but opted instead to set the Imperial Unit for a superplex; Cobb escaped and prevented a Blackout audible to boot before huge deadlift suplexes and a mammoth Tour of the Islands put him on 2-1 and four points. 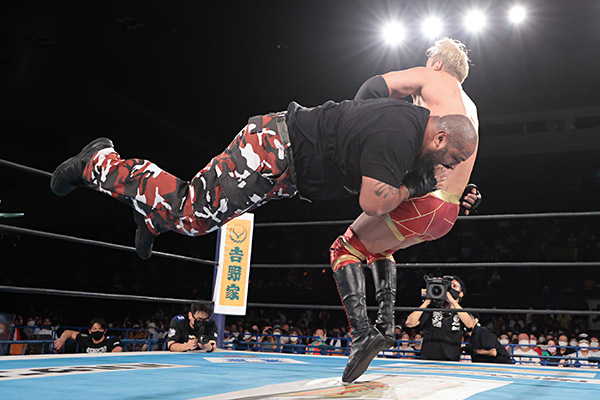 The second A Block match of the night saw Kazuchika Okada face the intimidating opposition of Bad Luck Fale. A fast start saw him knock the Rogue General down, but Fale responded by putting the Rainmaker in the lights with a big back body drop. Okada had to rely on pace to keep the big man down to size, and did so with a fast low dropkick, before using Fale’s momentum to land a body slam.

Struggling, Fale brought Okada outside and went for a Bad Luck fall on the floor, but was countered with a DDT. Back inside, Okada landed a huge reverse neckbreaker and elbow drop, but Fale was still alive, and dropped the Rainmaker with an impactful spear. A Grenade was countered with a dropkick, but Fale swatted away a Rainmkaer attempt and landed the move on a second try for a very near two. Fale set for the Bad Luck Fall in ring, but Okada escaped, landing a neckbreaker and then sinking in the Money Clip for the tapout win. 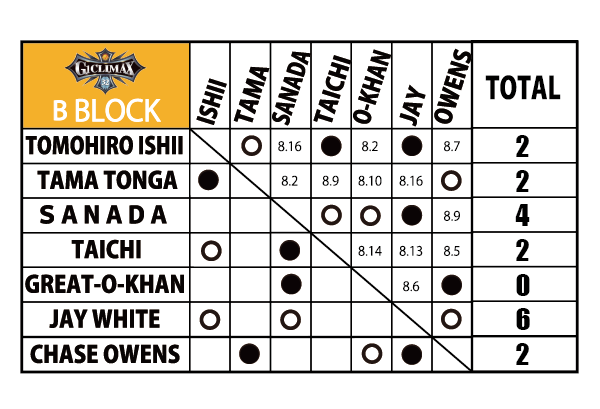 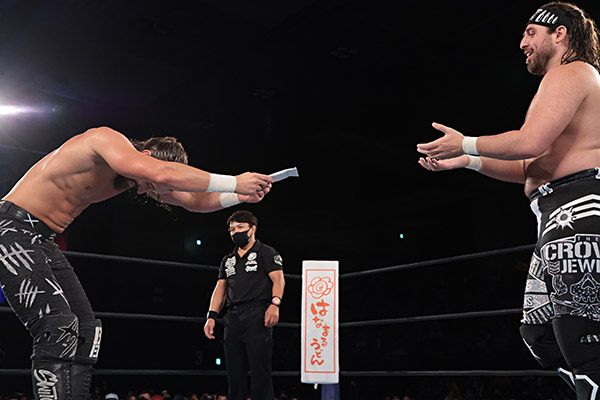 B Block saw Jay White facing Chase Owens, in a match where it seemed a ‘plan’ was in place. Owens was given an envelope to lie down but was angered that his stack was not quite as fat as he had expected. As tensions gradually escalated, a pro-wrestling match broke out among the farce, Owens blasting White with a C-Trigger before setting to more earnest work outside the ring. 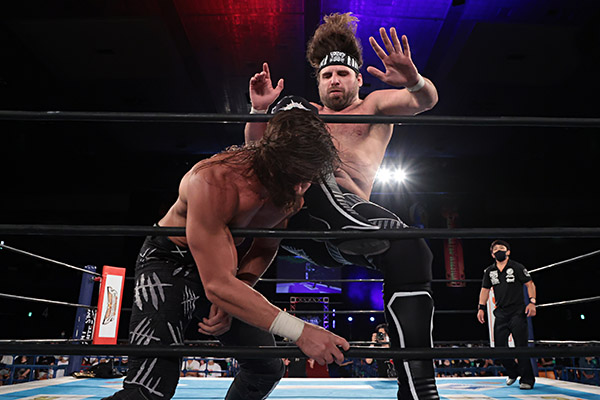 Both men stopped short of taking one another out on the floor, both nearly being cost the match as a result. White seemed clearly conflicted about attacking his teammate, but regained composure to land a Bladebuster. Owens would fire right back though, and a superkick hit the Switchblade right to the jaw, another knee getting him two. Only Gedo would stop Chase from landing the Package Piledriver, as the Blacksmith pleaded that he had the rest of the Crown jewel’s payoff; and as White again snapped himself back into mental control, a Saito suplex and uranage connected. 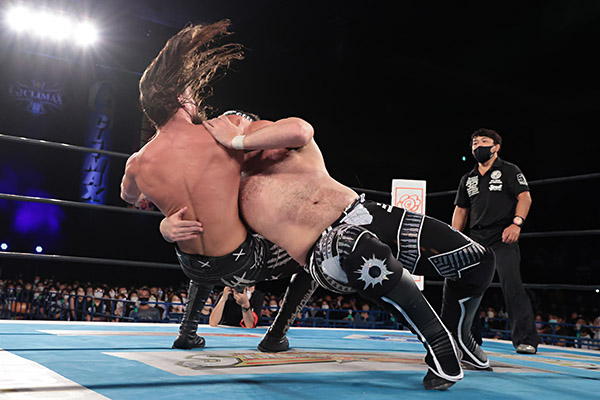 White would get on the run for a finishing blow, but was met with a massive C-Trigger and then the Styles Clash for a long two. After yet another knee from Owens, he was quick to set for the Package Piledriver but was countered with a snap Bladerunner for jay White to stay undefeated. 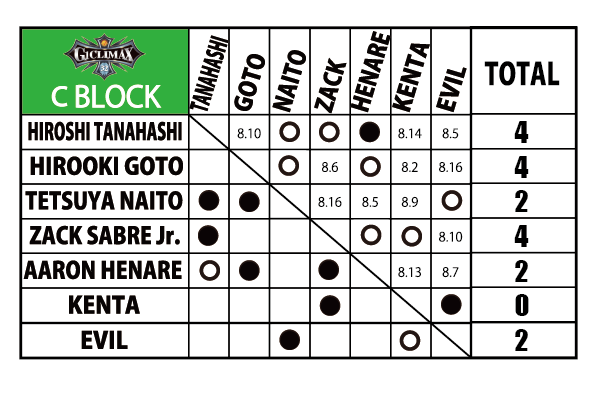 It was C Block that had the main event spot of the evening, Tetsuya Naito in desperate need for the win and starting fast to frustrate his opponent. It wasn’t long before the King of Darkness took advantage outside the ring. With shots into the guardrail, EVIL set up for a homerun chair shot swing, and retained control until he hit an inverted atomic drop, building momentum as he struck in combination. 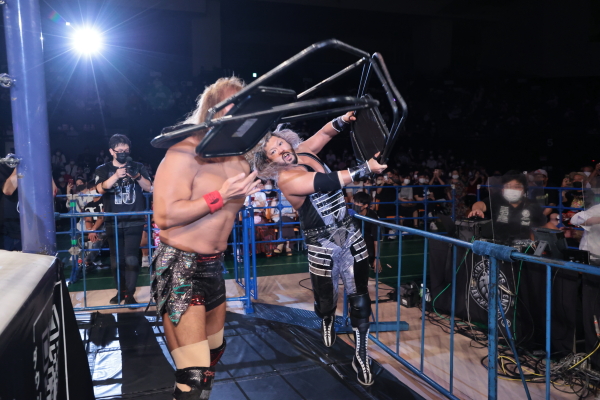 EVIL couldn’t regain control of the match outside the ring, Naito cracking him with a chair shot from his opponent’s playbook, but a trip up for a Frankensteiner saw a counter from the HOUSE OF TORTURE leader that dropped Naito face first on the turnbuckle. Taking over again, the King of Darkness nearly picked up two points with a Darkness Scorpion and Darkness Falls; El Ingobernable found a response with a single legged dropkick, but would be sent out of the ring with a lariat as Dick Togo set up a table outside. 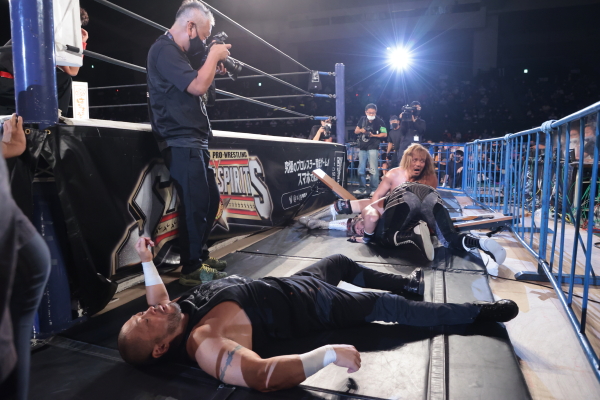 With his G1 depending on it, Naito avoided the table and sent EVIL flipping over the guardrails outside. Momentum building, Naito hit a running Destino but would see an old H.O.T favourite played when EVIL shoved him into the referee and set with a Magic Killer through the table; somehow El Ingobernable resisted though, and delivered a piledriver of his own off the apron to EVIL through the furniture.

With his own back badly lacerated from crashing through the table, Naito landed Esperanza and set again for Destino, but would be sent wounded spine first into the exposed turnbuckle. Naito barely kicked out of a crunching lariat from EVIL; dogged and determined he avoided EVIL’s finishing blow before using a recovered Togo to swing with a DDT. Valentia followed and then Destino for three. 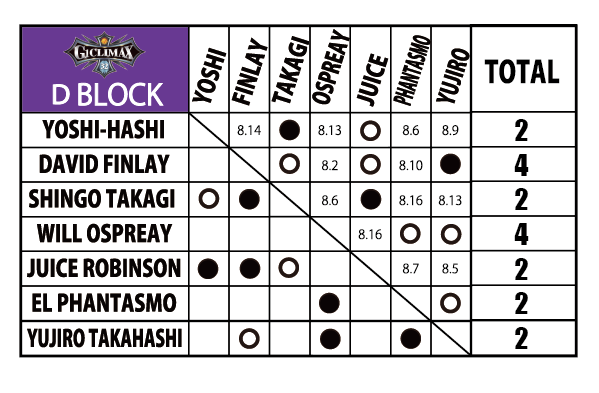 In D Block, YOSHI-HASHI faced a furious Juice Robinson, who brutally attacked the Headhunter before there was even a bell rung. Even after they both got in the ring, it wasn’t for long; Juice threw his foe to the floor where he wanted a powerbomb on bare concrete but instead was met with a headscissors into the ringpost, Robinson only barely making the count. Making the most of his offenseive break, YOSHI-HASHI buried stinging chops into the chest of ‘Rock Hard’ Robinson, and came close to victory with Kumagoroshi as Juice managed to reach out and grab the bottom ropes. 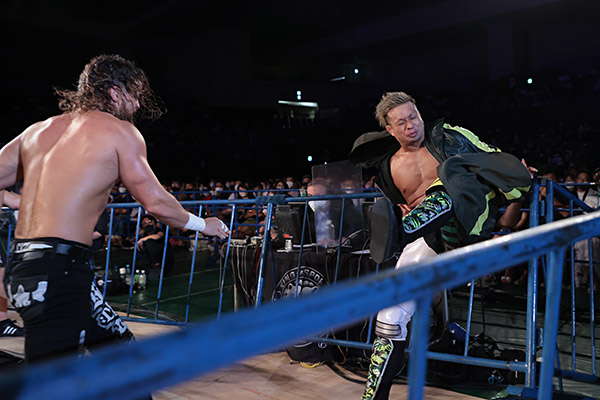 The frustrated Juice would try and shortcut his way to victory but referee Marty Asami was having none of it, refusing to count a handful of tights as YOSHI-HASHI got a backstabber and a running knee. Seemingly undeniable, YOSHI-HASHI escaped a Pulp Friction attempt and hit a Dragon suplex, before Karma scored for a huge three count victory. 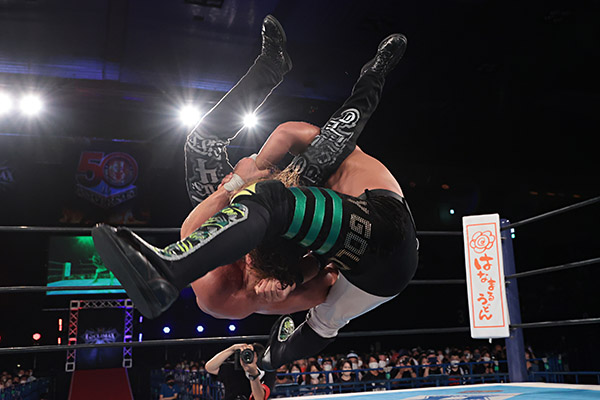 Next on the schedule is hamamatsu on Tuesday August 2. A Block sees Toru Yano face Tom Lawlor, B Block sees double duty with Tama Tonga facing SANADA and Great-O-Khan taking on Tomohiro Ishii, Hirooki Goto meets KENTA in C, and D Block has a main event of David Finlay vs Will Ospreay.