The second night in EDION Arena Osaka will bring us five more big G1 Climax 32 matches on August 7. With the grand final just 11 days away, who will set themselves up in best shape for the final fortnight? 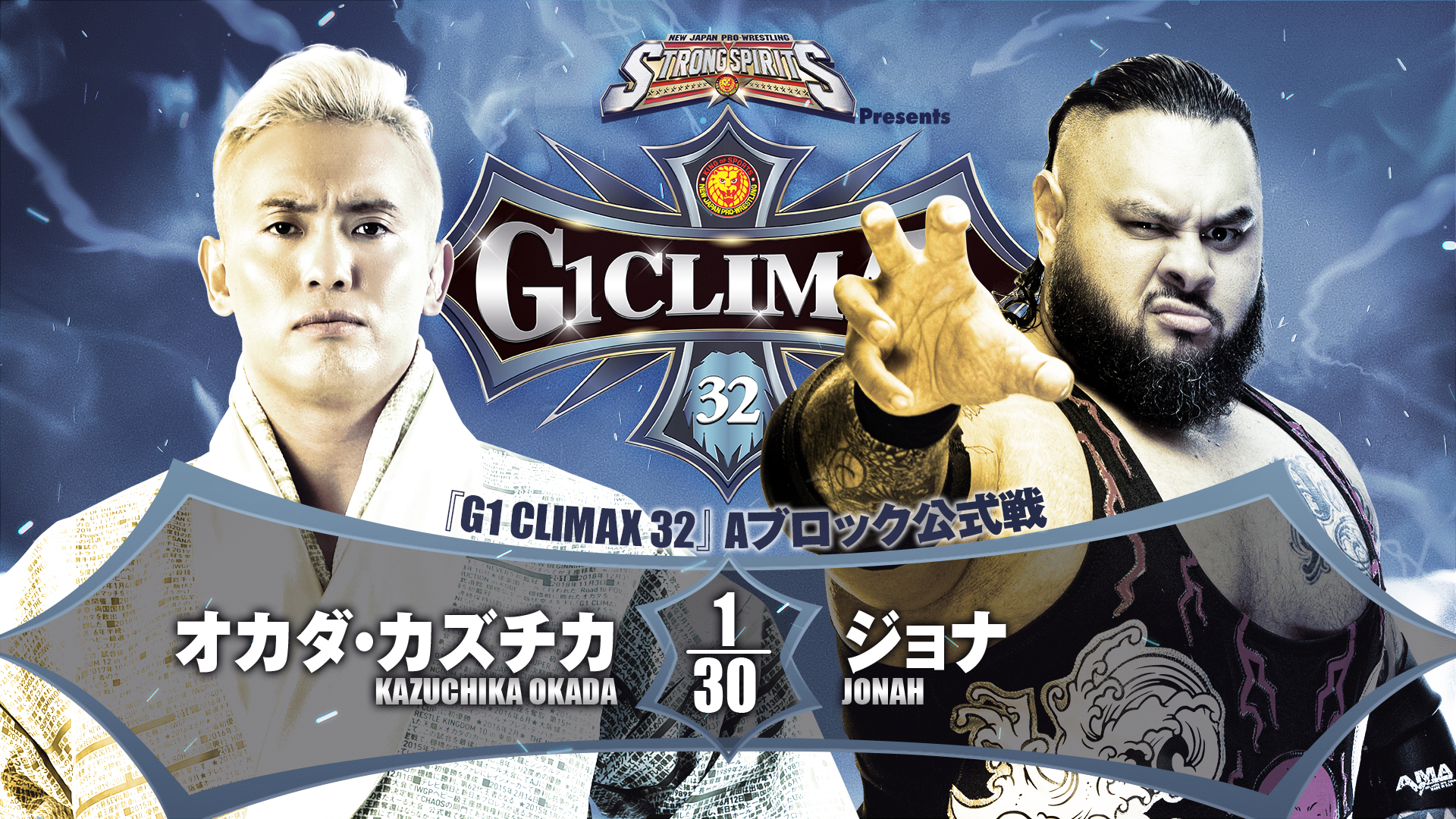 Kazuchika Okada created a theme for himself heading into the G1 of the superhuman contender taking on monstrous opposition, and no other match in the schedule sums up that idea better than this main event. After a first match loss to Toru Yano, JONAH doesn’t have the perfect record Okada possesses, but a win would definitely give his Top Dog moniker considerable credibility.

Not that JONAH struggles for credibility. A super heavyweight war in Ehime saw the Australian collide with Jeff Cobb in an insanely brutal bout before delivering a monstrous superplex and Torpedo for the win. Yet with Jeff Cobb and Bad Luck Fale already adding their names to the  list of giant victims for Okada, the Rainmaker is not about to give up his perfect record. With his loss to Jay White over the IWGP World Heavyweight Championship still in his recent Osaka history, Okada wants to leave the town with the image of him on top of his block, and on the way back to being the top of the world. Okada is close to being as irresistible a force as there can be in professional wrestling, but can he overcome the immovable JONAH? 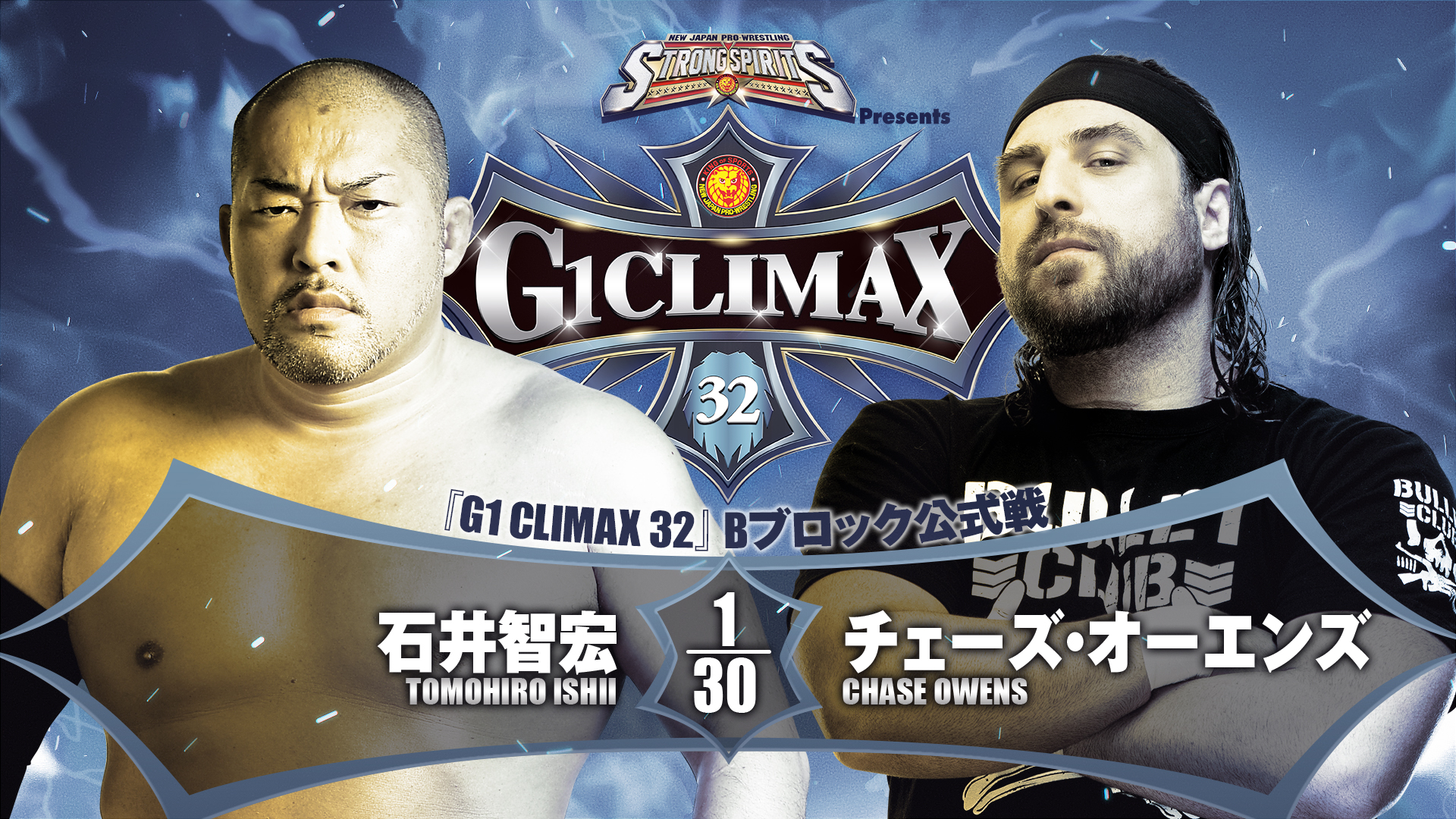 Ishii and Owens are both eliminated

With 1-3 records, Tomohiro Ishii and Chase Owens are effectively fighting for pride with no hopes for making the final four. Yet Ishii is no stranger to fighting for pride, and bringing the best of himself and his opponent in the process. Owens, very eager to throw his match with Jay White for a hefty payoff has little of the pride that Ishii is famous for, but it would be incorrect to assume he has none at all. When Owens, feeling cheated by Jay in Aichi, turned up the effort, he came close to beating the IWGP World Heavyweight Champion, and the Stone Pitbull will drag every bit of the fighter within Chase out in the ring today. 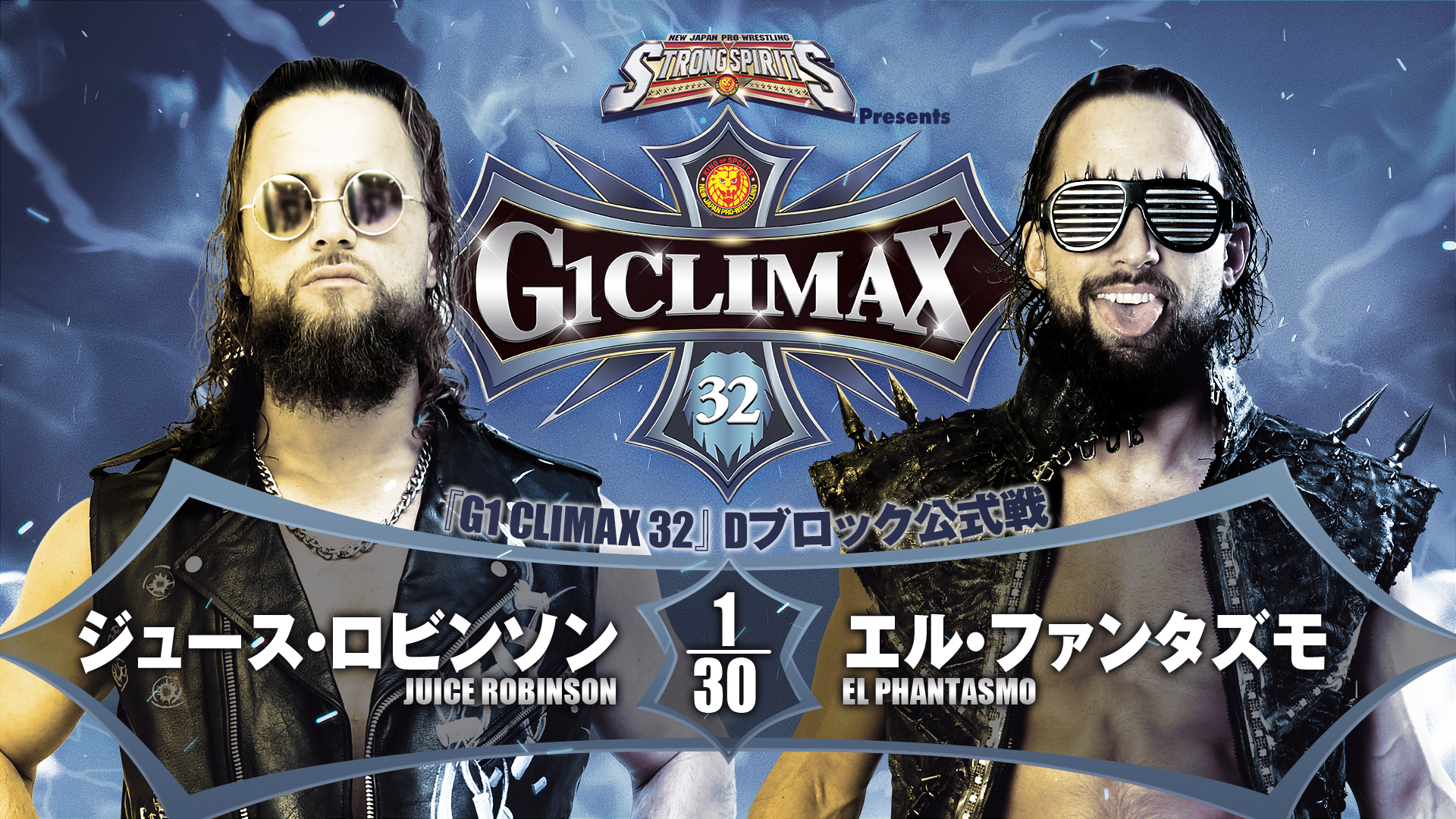 The last of three BULLET CLUB derbies in D Block will see Juice Robinson face El Phantasmo. After a hot start against Shingo Takagi in Hokkaido, Juice Robinson dropped three matches straight against David Finlay, YOSHI-HASHI and then shockingly Yujiro Takahashi. At two points, Jucie is effectively out of the running and can only hope to win out and have a lot of luck go his way. Phantasmo is only faring better thanks to having a match in hand over Robinson, and cannot afford another loss. In an ultra competitive D Block, neither is willing to give up any ground for the sake of BULLET CLUB harmony. In Philadelphia last year, Juice defeated ELP on NJPW STRONG, but Robinson and Phantasmo have made rock hard and heavyweight transitions since.

While Phantasmo will have two matches left to wrestle after today, this is the penultimate league bout for Juice who after Osaka must wait and see how D Block develops in Hiroshima, Machida and Nagano before taking on Will Ospreay in the Budokan. Who will pick up a vital pair of late points this afternoon? 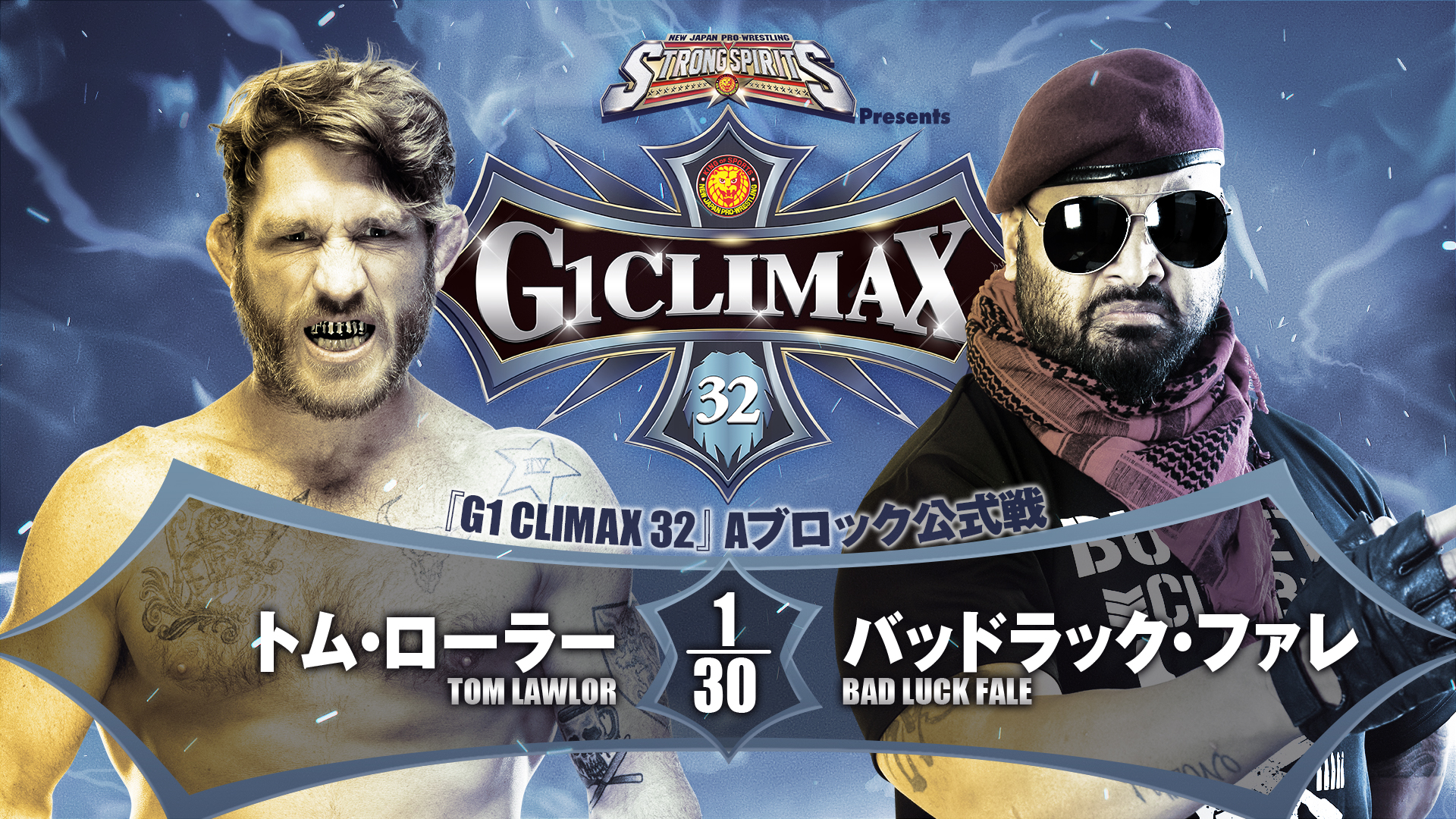 Tom Lawlor finally got his first points on the board in his G1 career in Hamamatsu this past Tuesday, a win over Toru Yano giving a big boost in confidence to the Filthy One before this encounter with Bad Luck Fale. For the Rogue General, a 2-2 record is keeping him in the mix, but his match schedule means he will be the first in A Block to reach five matches today; after this meeting he must sit and wait for JONAH on August 16 in the Nippon Budokan, and situations beyond his control may well push him out of the running by then.

The best Fale can do then is control his destiny to the best of his abilities and that means defeating Tom Lawlor. In a pre-tournament interview, Lawlor suggested that conditioning will be critical after four matches of accumulated damage on Fale and the midsummer heat and humidity playing a factor in Osaka. There is no doubt that he and Team Filthy partner Royce Isaacs will be doing everything in their power to keep the match contained in the ring where Fale lost to Jeff Cobb and Kazuchika Okada via pinfall and then submission; should things go to the outside, there is more than a slim chance of the BULLET CLUB monster gaining his third win via countout in this tournament. 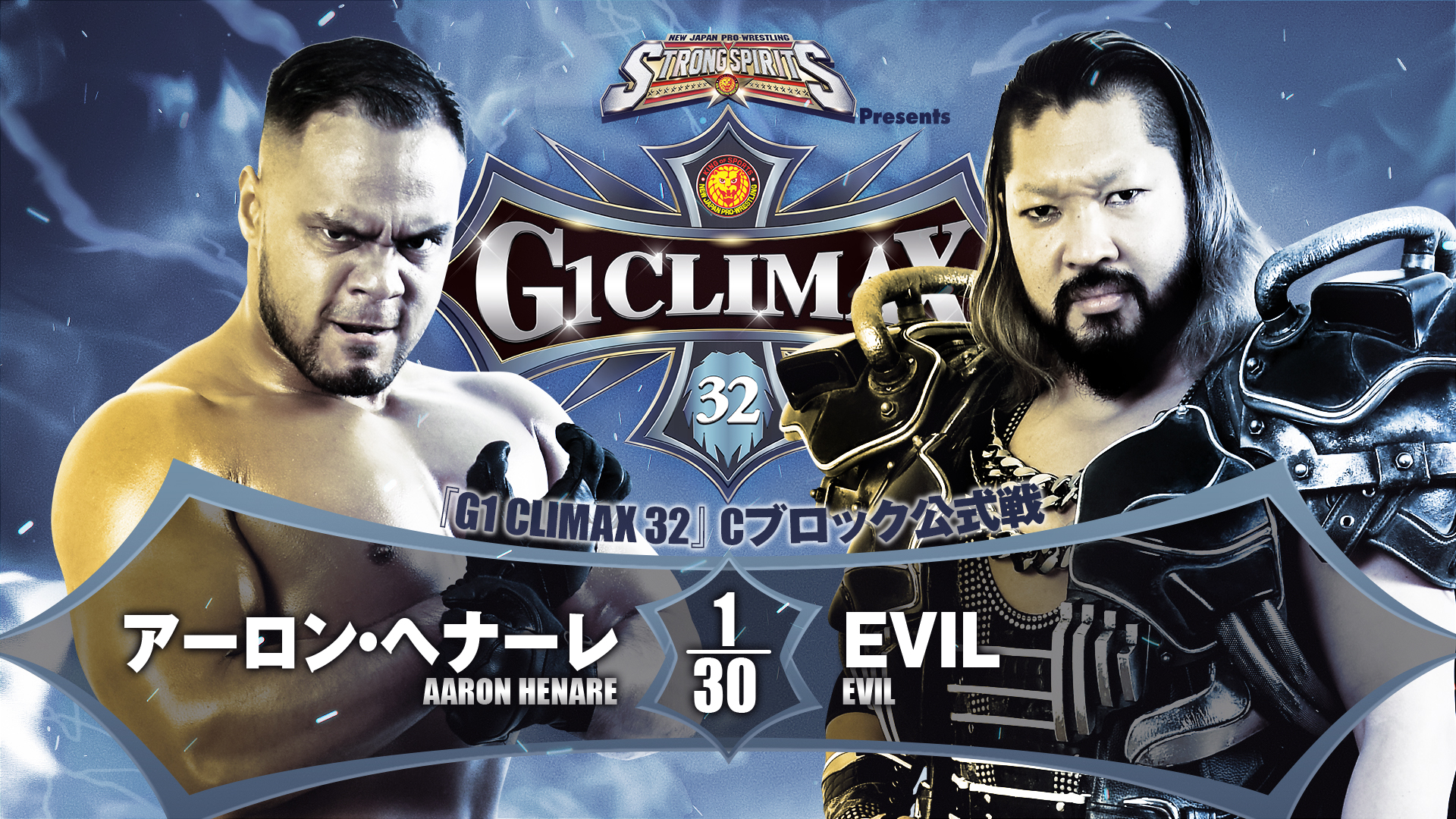 After a hot start against Hiroshi Tanahashi in Hokkaido, Aaron Henare has fallen to 103 and effectively out of the running, but hard hits and strong performances have been a common thread whether in victory or defeat. There would definitely be something cathartic about the Ultimate Weapon’s strikes punishing both EVIL and Dick Togo, but after a humiliating defeat to Hiroshi Tanahashi in Ehime Friday, there is no doubt that the King of Darkness will not be letting up. 1-2 and needing a win, HOUSE OF TORTURE will be doing everything in their power as a unit to protect their investment, and Henare will have to have his head on a swivel today in Osaka. 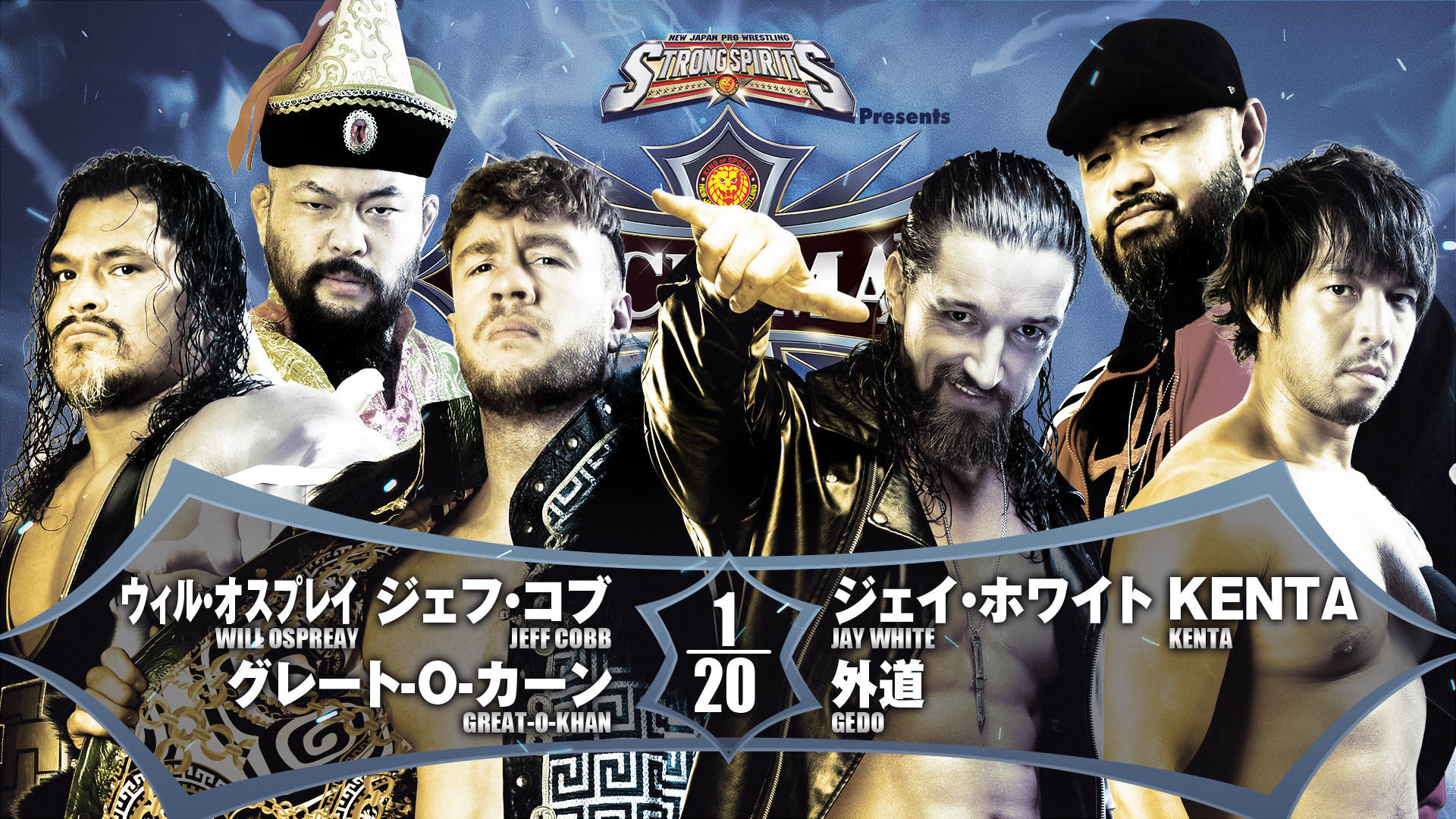 United Empire face BULLET CLUB in the last tag match of the evening, and one with a potentially very telling glimpse into the future. In the immediate past, Jay White and Great-O-Khan are coming off their B Block match less than 24 hours prior, but this is also the first meeting of Will Ospreay an the Switchblade in any ring since Ospreay formed United Empire in 2020. Both men have legitimate claims to being the best wrestlers in the world, and while the Catalyst of Professional Wrestling has the definitive proof in the form of the IWGP World Heavyweight Championship, Ospreay’s status as IWGP United States and British heavyweight Champion is impossible to ignore. With a win for Ospreay in their 2020 G1 clash the most recent result in the record between these two men, there will doubtless be a thick layer of tension in the air when Ospreay and White face off Sunday. 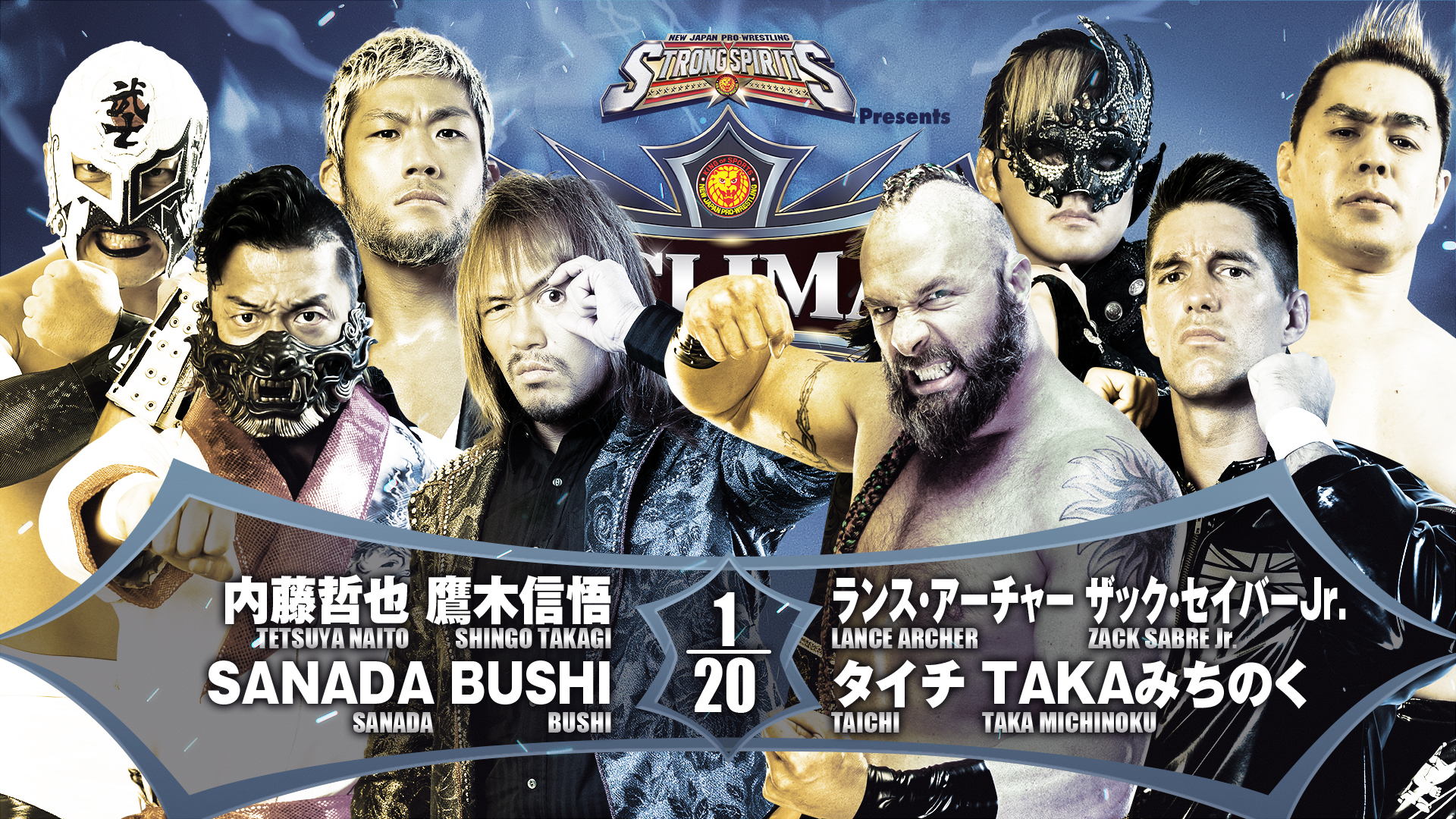 The third match of the evening will see Suzuki-Gun and Los Ingobernables De Japon once again lock up in eight man action. With Naito rearing back from two early losses to sit at four points, and Sabre sitting tied at the top on six, it may be the August 16 bout between Tetsuya Naito and Zack Sabre Jr. that settles the fate of C Block. Will this turn out to be a key preview? 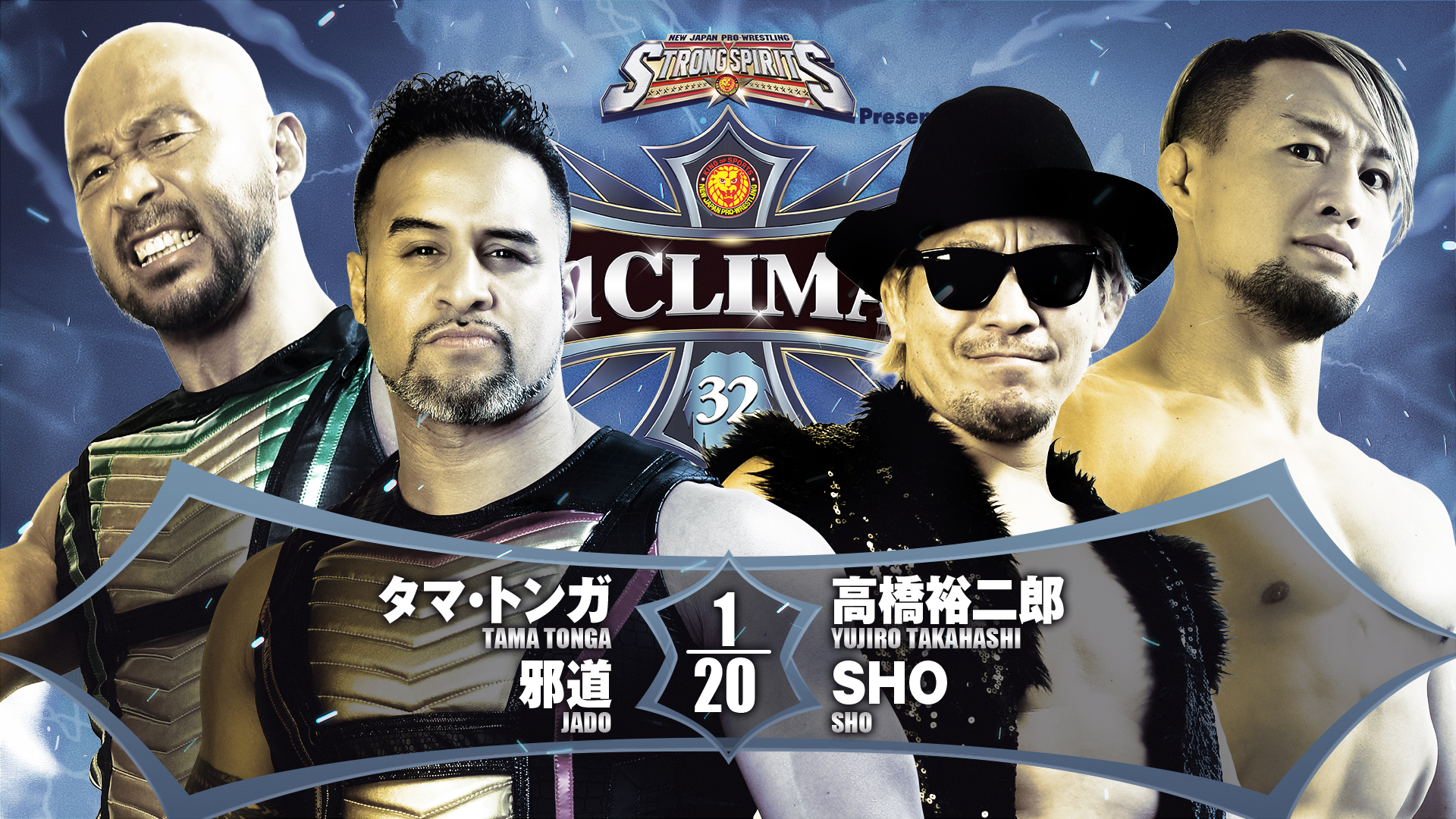 With three more matches still to wrestle, Tama Tonga gets set for a busy final fortnight by taking on HOUSE OF TORTURE in tag team action. While the last boss of Tama’s revenge campaign through the G1 remains Jay White on August 16, he’ll gladly take the time to put the boots in on Yujiro Takahashi and SHO, though the H.O.T duo are more than capable of dealing damage of their own. 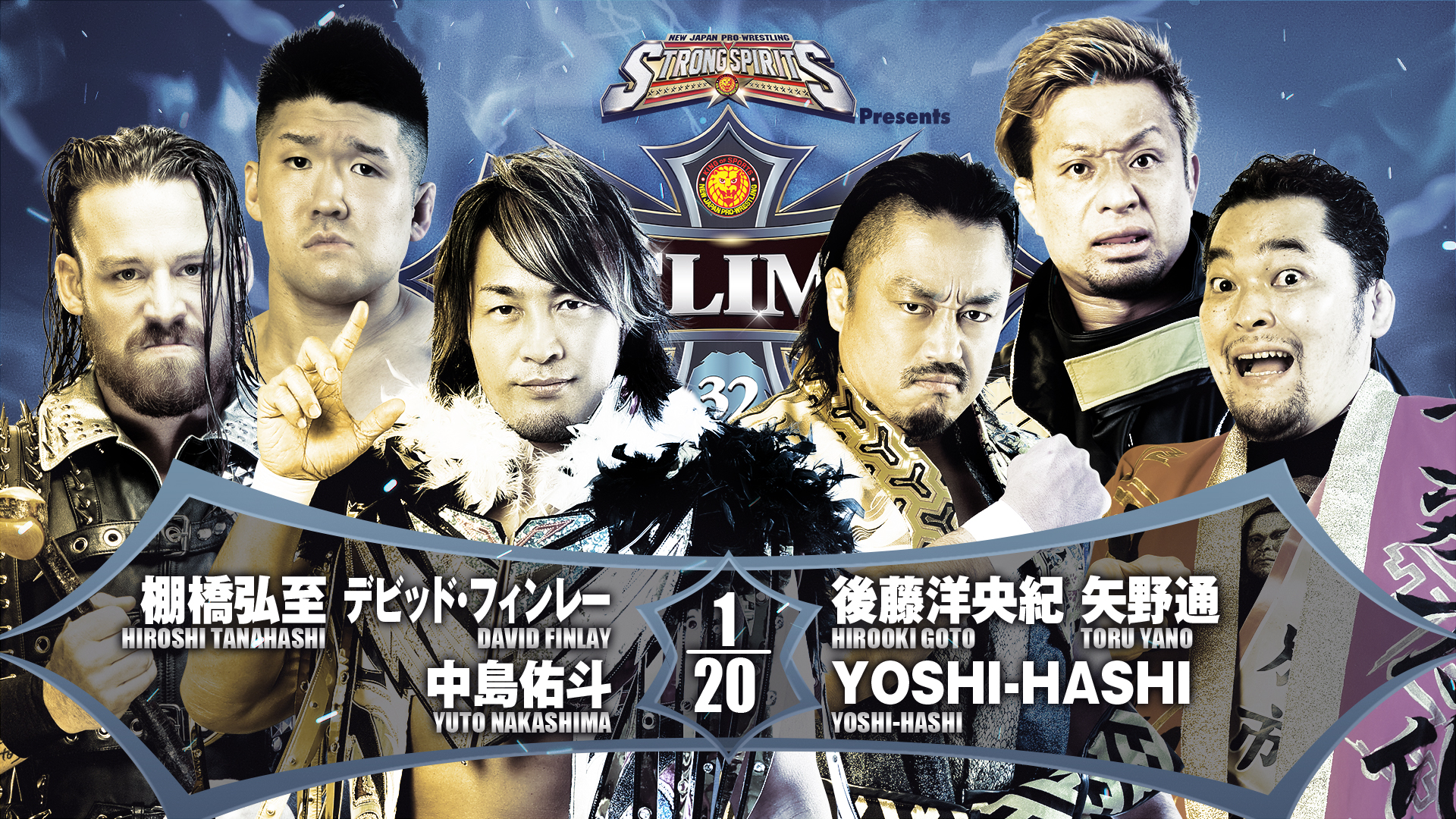 Six man action will kick off the afternoon in Osaka. As Hiroshi Tanahashi and Hirooki Goto prepare for what could be a decisive C Block clash in Hiroshima Wednesday, they battle for the upper hand today, while YOSHI-HASHI and David Finlay will also look to make a statement before meeting next Sunday in Nagano.