Second half gets underway with a clash of good and EVIL 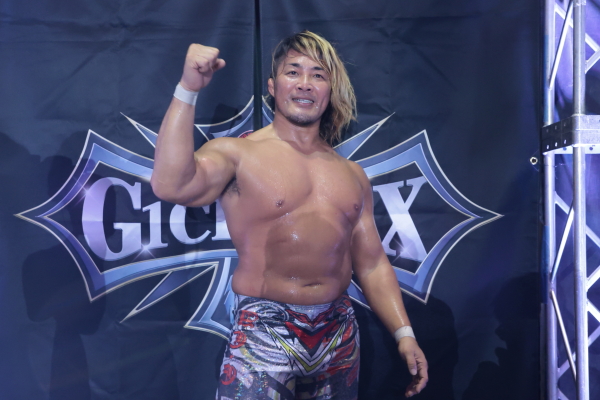 The G1 Climax entered its second half on August 5 in Ehime with five more league matches. 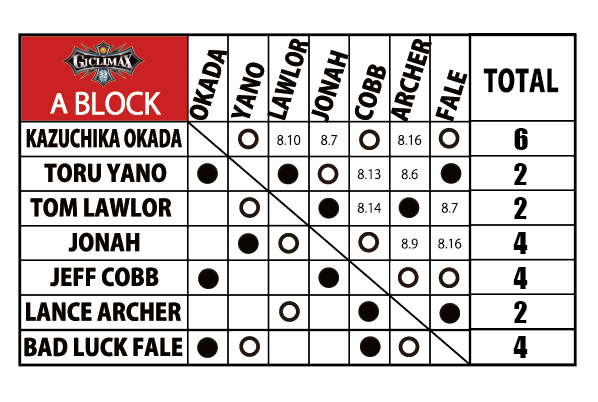 A Block saw a hotly anticipated Monster Block clash between JONAH and Jeff Cobb. The ground seemed to shake underneath both men’s feet as they locked up and refused to give an inch to one another; a mid ring shoulder block collision was no less successful in creating an advantage for either giant, both men being taken to the floor with the recoil. 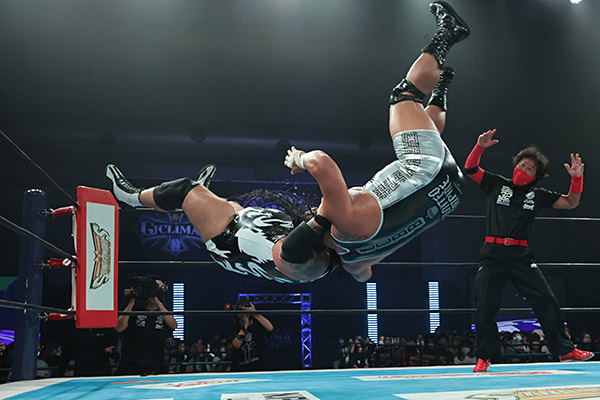 JONAH would eventually get an edge, blasting Cobb with a boot on the floor before a flying shoulder tackle off the apron. Slamming the ring fence on Cobb’s ribs, the Top Dog created a weakness to exploit, and did so with a slam onto the apron and short range body attacks, but a wild lariat would give Cobb just the barest of breathing room. As the men traded strikes, Cobb would gain an upper hand at last, and a pair of knockdowns was followed with a massive suplex. JONAH resisted Tour of the Islands however, and met the Imperial Unit with a huge spear as the match wore on.

JONAH wanted the Black Forest Bomb; denied, he came off the second for an unbelievable cross body that was caught by Cobb, and rolled through for a nearfall, super heavyweights wrestling like they were in Best of the Super Juniors. Moments later, it would be Cobb on top, only to be met with an unbelievable superplex by the mammoth Australian, who took flight with Torpedo to pick up the win. 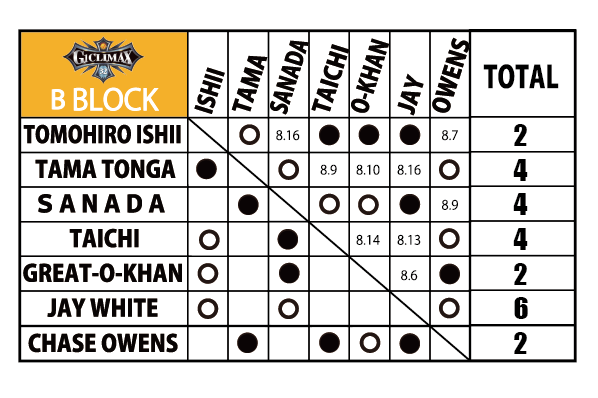 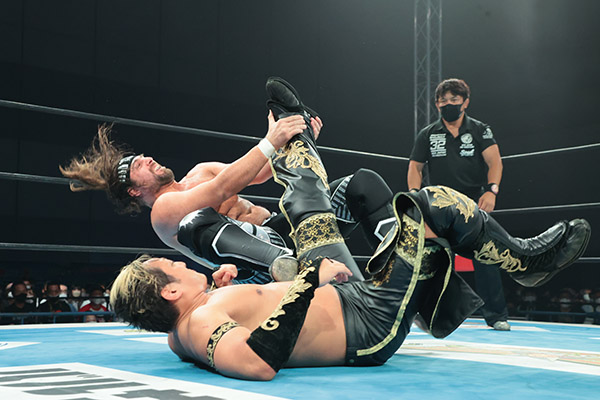 In B, Chase Owens at 1-2 needed to get a second win over the 1-1 Taichi. An aggressive start saw Taichi go for the throat of Owens before being hurled into the ringside steel for his trouble. Chase was relentless in control of the Holy Emperor, blasting Taichi with a C-Trigger, but a second attempt at the mvoe brought Taichi back with a head kick as the fans in Ehime came alive. 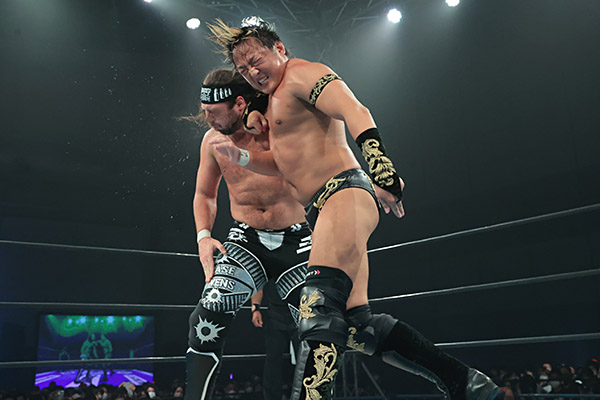 An Ax Bomber and Dangerous Backdrop scored for Taichi, who primed for a thrust kick but was blasted by an Owens knee. As he reassumed control of the match, Owens wanted the Alabama Jam off the top rope, but was met with a gamengiri instead; after a series of nail biting counters between Package Piledrivers and Black Mephistos, it would be the sumo techniques that brought Taichi victory, a throw followed by the Yokozuna Elbow and then Black Mephisto to put Owens on the bubble. 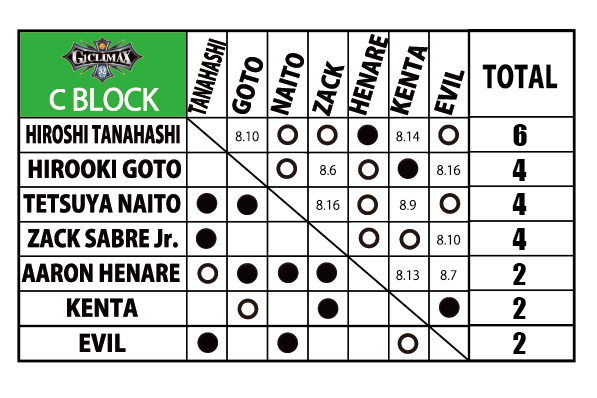 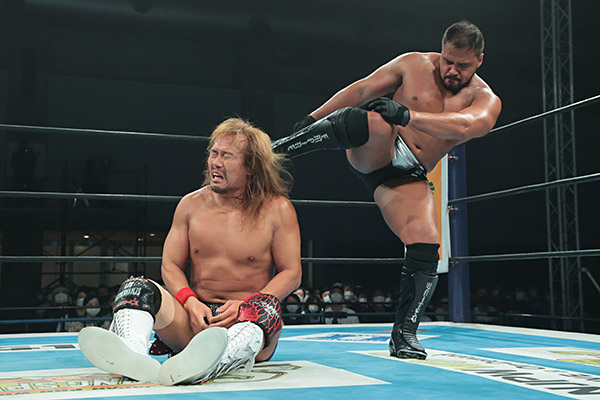 C Block saw double duty on the evening, starting with Aaron Henare and Tetsuya Naito both needing victories. It was a match of Naito’s evasiveness overcoming Henare’s striking power early as a heavy body blow scored for the Ultimate Weapon, but the Cancel Kick being met with a tijeras. It was a reversal into the guardrail though that put Henare in full control, and he took his time applying pressure, dropping elbows from the full mount inside before finding a painful heel hook. 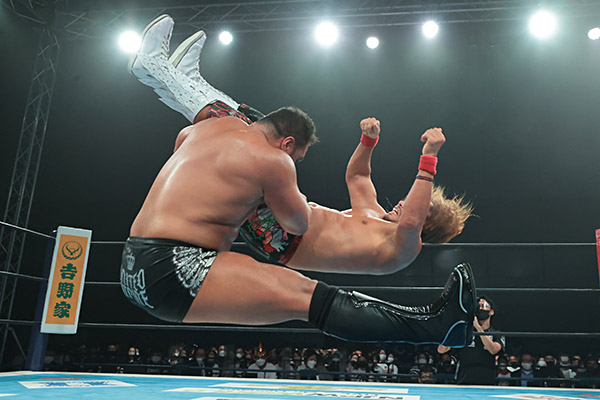 Naito went to his feet to create distance, and a dropkick scored even though he didn’t have the spring in his heel for a corner combination. Yet the Ultimate Weapon maintained his composure, and landed a curb stomp that rattled El Ingobernable. A Justice Knee in the corner was just as concussive, but Naito still kicked out before finding his rope swinging DDT and honing in on Henare’s neck. A massive top rope Frankensteiner sent Henare flying across the ring, but the running Destino follow was countered into the Berserker Bomb. 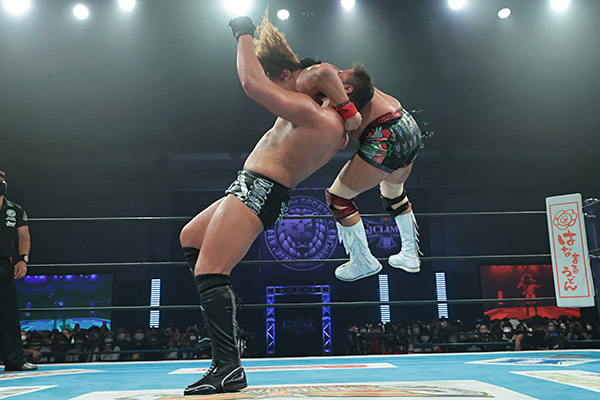 As both men looked to close the match, Naito rocked Henare with a wild right palm strike, but was met with just as vicious a kick and a senton from the Maori warrior. Naito would use his speed to keep distance, but as che charged into Henare was caught with the Ultima, fading first before finally making the ropes. With Naito lifeless, Henare wanted the stoppage victory; denied, he went for Streets of Rage, and though Naito escaped, he didn’t evade a brutal gut punch. Naito countered another Streets of Rage attempt with a midair Destino though, and the full version connected for victory. 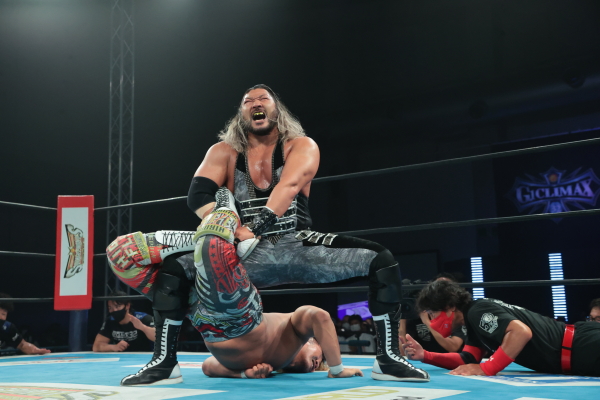 The main event of the evening would have Hiroshi Tanahashi fighting to take the lead in C as he sought his third win over the ever dangerous and devious EVIL. The Ace resisted EVIL’s tactics in the early running in the ring, but not outside of it, as ring announcer Abe found his familiar position upside down on the concrete and the King of Darkness took control. An exposed turnbuckle added to the damage dealt to Tanahashi, but the Ace found a way to knock down EVIL and dropkick Dick Togo, fighting his way back into the match. 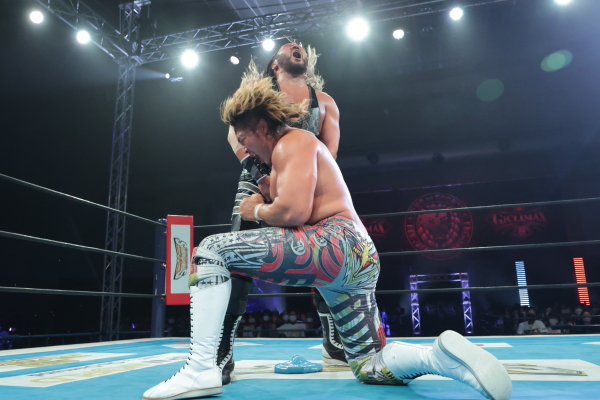 Tanahashi’s break did not last long however. Togo and EVIL conspired to once again stack the deck against the Ace, who was screaming in pain with the Darkness Scorpion, but dug deep with a Dragon Screw at the ten minute mark, and then more to the grounded H.o.T leader. With a Texas Cloverleaf, EVIL was in deep trouble; just like with Tama Tonga at Dontaku, Dick Togo rang the bell himself to break the hold and create a distraction. Referee red Shoes Unno would finally eject Togo, but EVIL used the distraction to hurl a chair at the head of Tanahashi who buckled under two lariats and fell to a third for a nearfall. 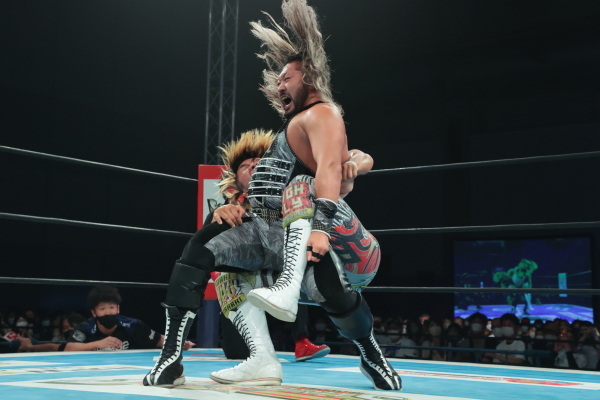 Tanahashi rallied with a trifecta of Slingblades to get two and a half from Unno at the 15 minute mark before heading up for High Fly Flow, but SHO would pull the referee out before the three count. As Dick Togo came out with another, soon bumped, referee, it was a three on one handicap situation; Tanahashi took care of SHO and Togo but was met with an EVIL low blow. Still, with every referee unconscious, no three count was rendered. Red Shoes now finally came to as EVIL landed Darkness Falls but Tanahashi still refused to be defeated.  Kicking out at two, Tanahashi almost fell to the clutches of EVIL, but countered with a Ground Cobra for the three count. 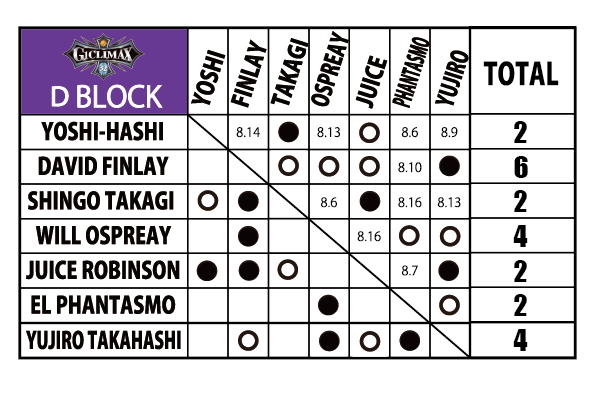 D Block would kick off the night with a BULLET CLUB derby as Juice Robinson took on Yujiro Takahashi. Accompanied by HOUSE OF TORTURE partner SHO, Yujiro proffered a Too Sweet, but Juice was in no mood, bringing the fight and shrugging off a rake to the eyes to drop the Tokyo Pimp with Snake Eyes over the top turnbuckle. With action spilling to the floor, Juice wanted a piledriver on the bare concrete of Item Ehime, but a SHO assist led to a back body drop that instantly put Yujiro in the driver’s seat. 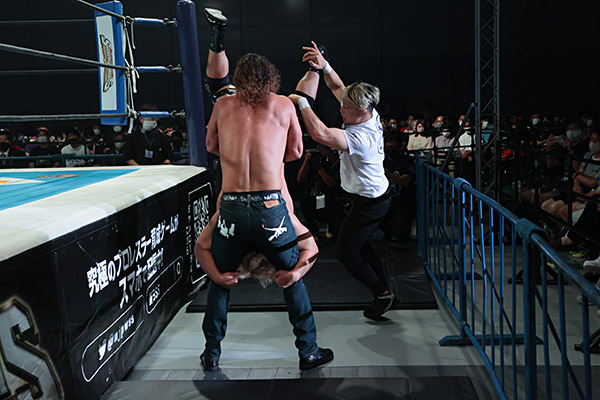 After chop blocking the knee of Juice to add to the damage done, Yujiro primed for Pimp Juice but was thrown away and squashed with a corner Cannonball. Juicebox got two, and Robinson got increasingly frustrated at the referee, paying for his distraction with a Takahashi DDT and Pimp Juice for a long two. Yujiro wanted Big Juice but got rocked with a right hand; SHO hopped on the apron for further distraction leading to a Yujiro roll up. Moments later it was the referee that was more than distracted as Takahashi brought the referee in the path of another Juice punch. A low blow and Big Juice later and Yujiro picked up his second win. 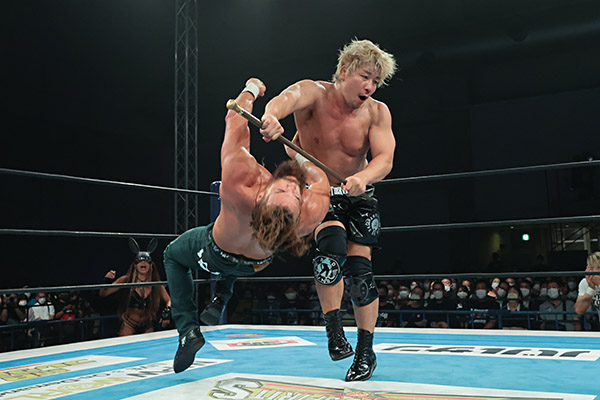 The G1 continues Saturday in Osaka, with Toru Yano facing Lance Archer in A Block, Great-O-Khan vs Jay White in B, Zack Sabre Jr. and Hirooki Goto in C, and D Block bookending the tournament matches with El Phantasmo vs YOSHI-HASHI and Will Ospreay vs Shingo Takagi in the main event.