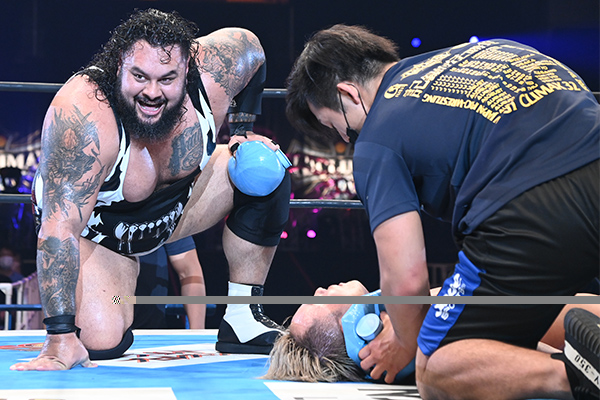 The G1 Climax saw its 13th day, and the second of two in Osaka on August 7, with perhaps the biggest result of the tournament being rendered on a red hot night of action. 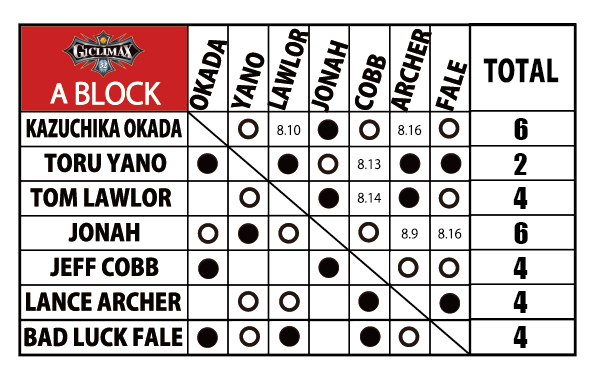 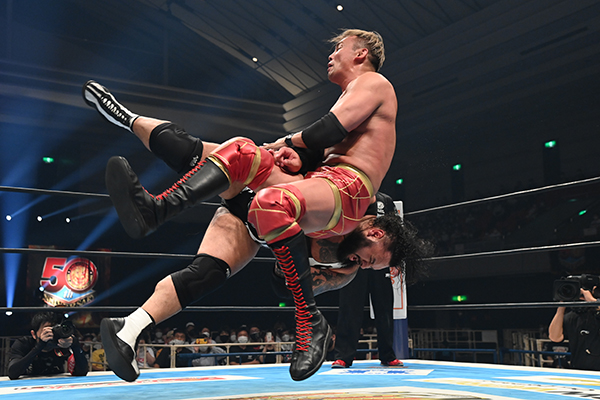 Indeed, it would be unlucky day 13 for Kazuchika Okada as he fell to Top Dog JONAH in a thrilling main event. With the immense size and strength disparity evident, Okada tried to attack JONAH’s base early, but would be thrown violently into the ringside guardrails, before his back was slammed viciously into the ring post. 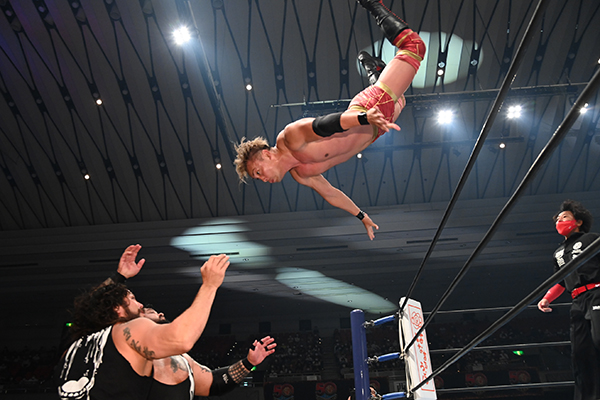 When Okada did mount some offense with his speed, pride in trying to slam his super heavyweight opposition came back to bite the Rainmaker. Instead, he had an impactful chance created with a DDT outside, and then a sensational rope con giro that had the crowd buzzing in the EDION Arena. Back in, Okada was twice able to stop a charging JONAH with dropkicks and finally landed a mammoth body slam to amazed gasps. 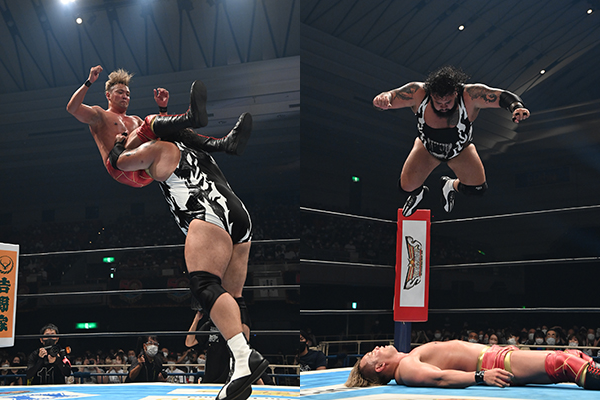 Going upstairs, he landed a top rope elbow, but could not put the Top Dog down, and as tensions continued to build in the arena. Okada hoisted JONAH to the top rope, but did not score with a dropkick, instead being met with an immense tackle; as the Top Dog put Okada on the top strand himself, the fated finish came to pass. Okada hooked the middle turnbuckle with his feet to avoid a superplex, and shoved JONAH down, but as he went for missile dropkick, he was caught with a sensational powerbomb. The Black forest Bomb followed, and then the Torpedo, as JONAH defeated Kazuchika Okada to sit atop A Block. 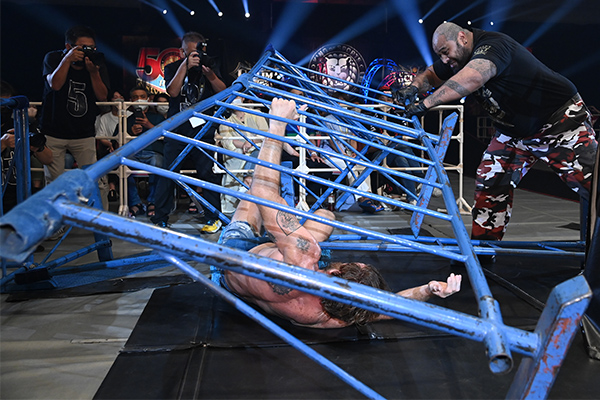 Also in A Block, Tom Lawlor was in a must win situation and came through against Bad Luck Fale on the afternoon. Despite Lawlor boasting pre-tournament that he had a clear conditioning advantage over his opposition, a hard kick to the head and a rattled skull courtesy of Will Ospreay in Ehime had negated some of that argument, and Fale’s hard hitting offense would create a lot of difficulty for Lawlor, as did an attempt to get the former UFC fighter counted out by burying him under guardrails. 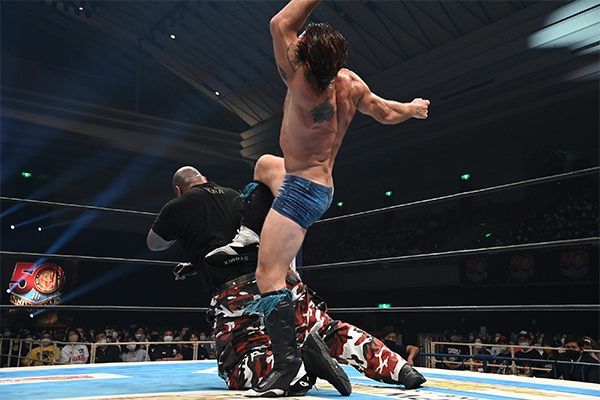 The Filthy One would slow Fale with a rear naked choke and tackled his base through some effective leg kicks. The Rogue General would respond with a brutal spear though, and seemed to be in control on the ay to victory. Instead though, it was the Osaka crowd’s support that perhaps came through for Lawlor, as he showed guts and determination in kicking out of the Grenade and escaping the Bad Luck Fall, setting himself up for the NKOTB and his second win to stay alive. 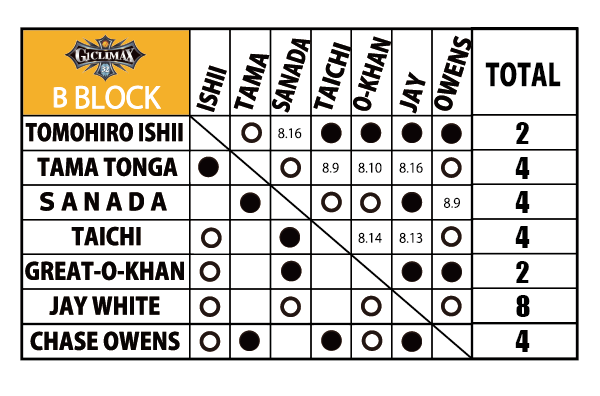 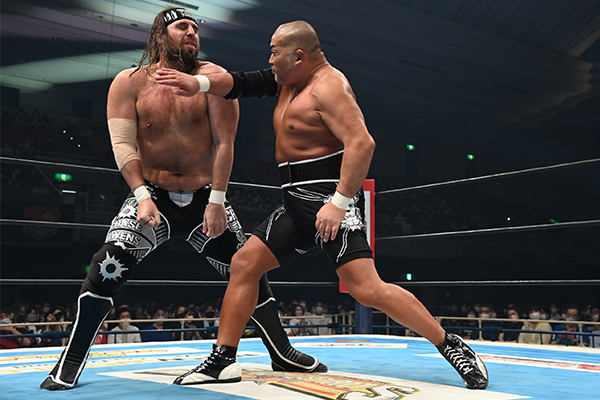 B Block was marked with a battle of pride between Chase Owens and Tomohiro Ishii. Both men out of the tournament, Ishii instead wanted a straight fight out of Chase, but Owens instead ensured that he had control of the match and the audience as he went to the knee of his foe. Ever dangerous as a wounded animal though, Ishii would fire off a cement block of a headbutt, and a delayed superplex. 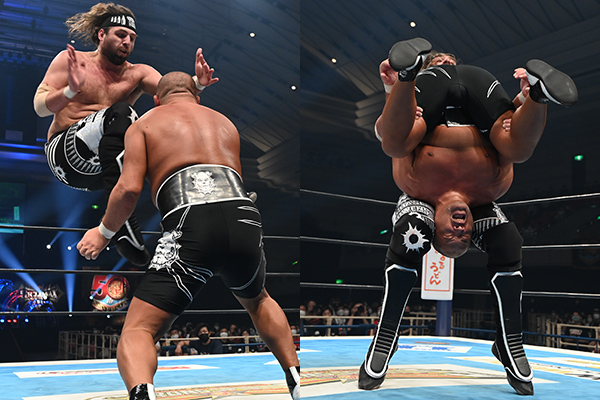 As the match wore on, Chase would meet with Ishii with his own Ishii like forearm combinations, and was able to fight the CHAOS member head on. Ishii twice wriggled away from the Package Pilederiver, but after Ishii was met with a full force C-Trigger, there was no response from a third attempt, and Owens picked up his second win of the G1. 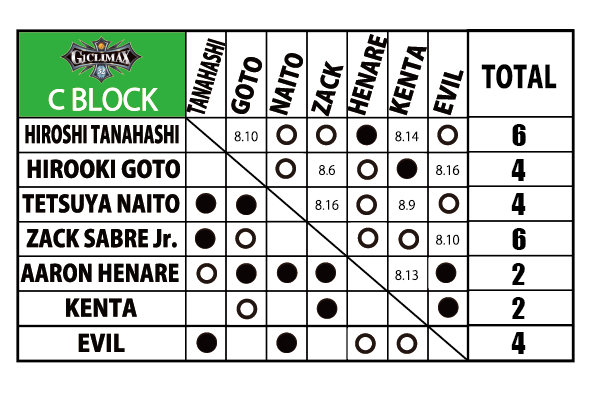 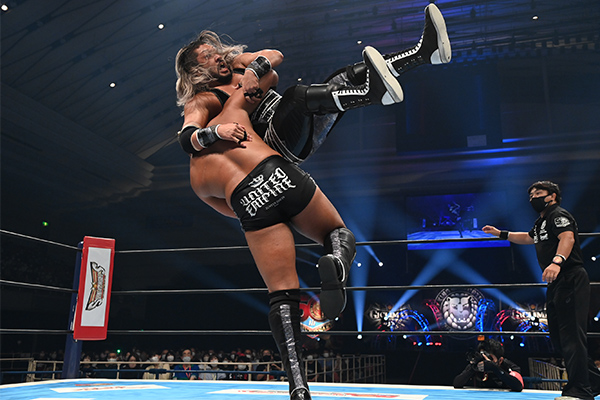 In C Block, EVIL found himself needing a win to solidify any future chance at making the final four, with Dick Togo very active in protecting his investment. The HOUSE OF TORTURE playbook would see Henare taste the ringside steel as well as an exposed turnbuckle, before Henare was able to overpower EVIL and Togo and fight his way back into the matchup. 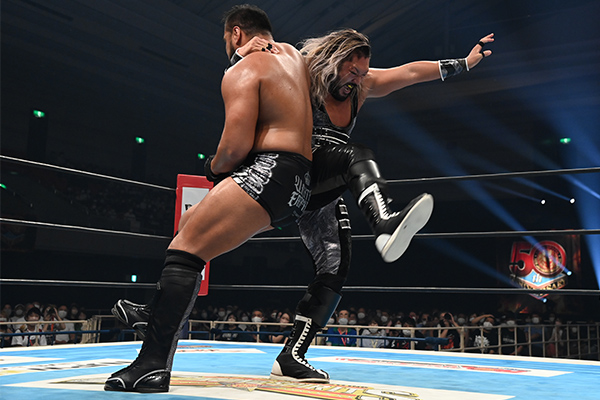 EVIL’s own ability was shown as he withstood a Henare senton and landed Darkness Falls, but Togo couldn’t help but get involved as he prevented the Ultimate Weapon from hitting Streets of Rage. When the referee took a tumble thanks to EVIL’s maneuvering, Togo would bring a chair inside, and though Henare sent Dick packing, he was met with the chair off the skull and EVIL for the pin, mathematically eliminating him. 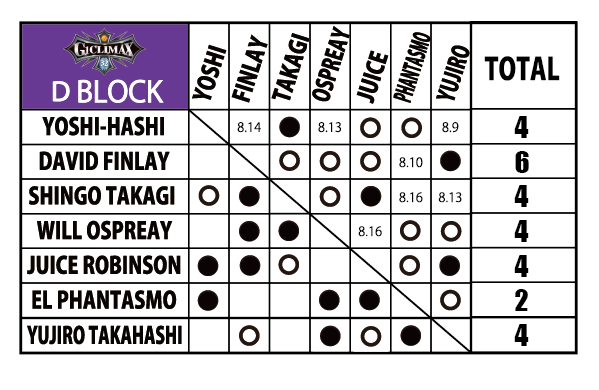 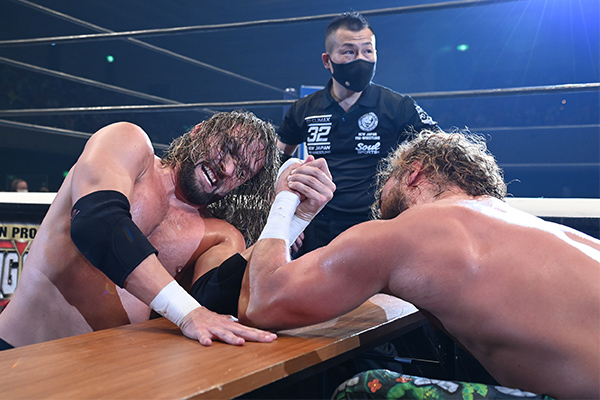 D Block saw a match that was at times parody, at times horror movie, and tense at every stage. Juice Robinson and El Phantasmo staretd with a mockery of the G1 competition as they moved in slow motion and delivered feather light strikes, before setting up a table for an arm wrestling contest. Yet when Phantasmo won, Juice’s temper was significantly shortened, and with a switch seemignly flipped, the match suddenly grew very violent. 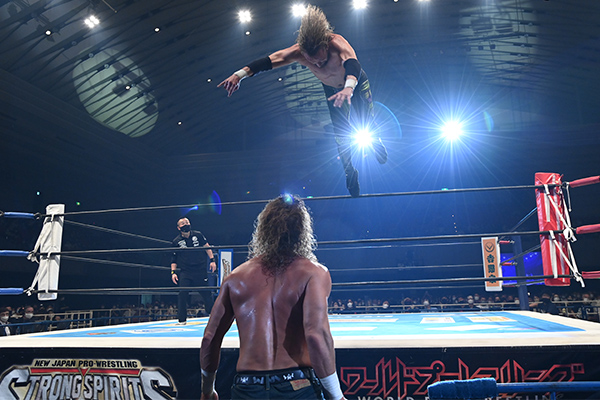 Robinson took ELP up the ramp and landed a devastating piledriver, the Headbanga somehow making his way to the ring and withstanding a Boston Crab to send Juice to the floor, where a tope suicida scored. Seeing red himself, Phantasmo drove Juice headfirst through the ringside table before hitting a tope con giro and Thunder Kiss ’86 for two. Harkening back to  BULLET CLUB past, Phantasmo landed a Styles Clash and V-Trigger, but not the One Winged Angel as Juice came back. 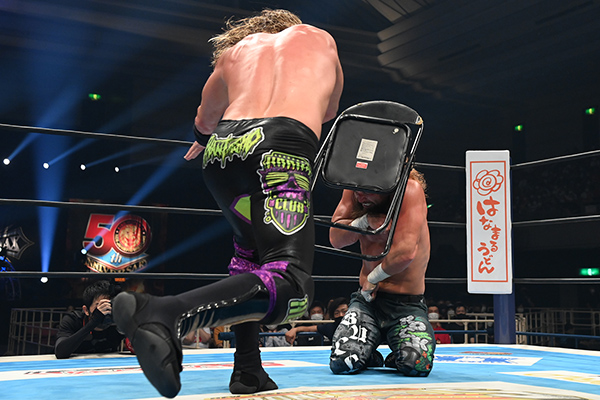 A left hand and then Pulp Friction connected for Juice, but ELP showed incredible determination in kicking out. The furious Juice wanted a piledriver onto a chair and Phantasmo hit a desperation low blow; taking the chair himself, Phantasmo hurled the weapon directly to the head of Juice center ring and in full view of the referee, costing him the match via DQ and effectively ending his tournament hopes.