Second night in Hiroshima in the books 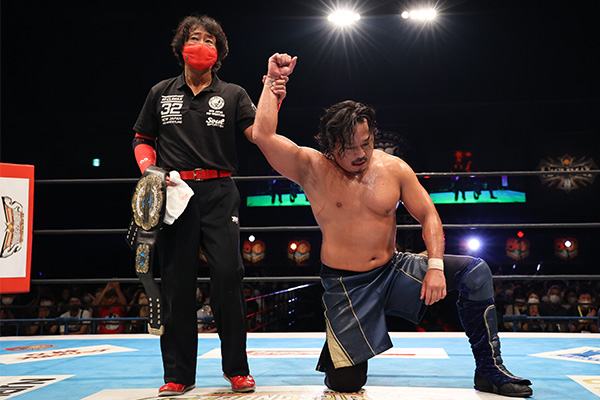 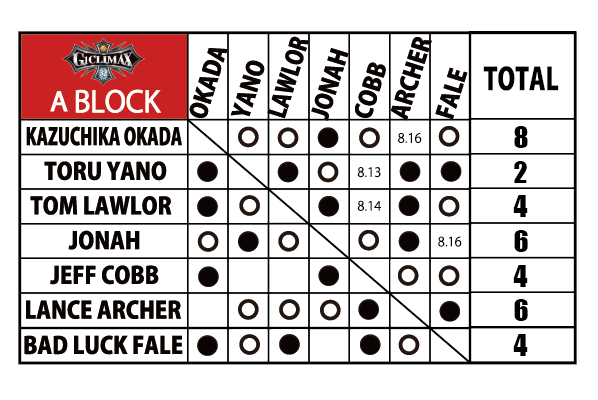 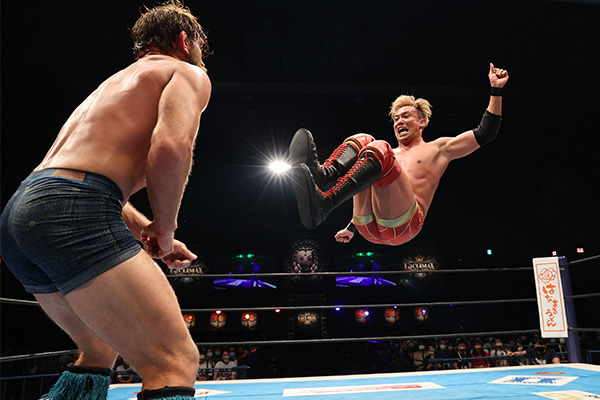 In A Block, Kazuchika Okada faced Tom Lawlor in a battle of the longest reigning former IWGP and STRONG Champions. Lawlor was extremely effective early in the match, taking the Rainmaker to the mat, and focusing on the left hand and arm. It would be a corner dropkick that struck first and hardest for Okada though, and Lawlor would be taken hard to the railing before he countered an elevated DDT attempt to hammerlock the Rainmaker over the steel. 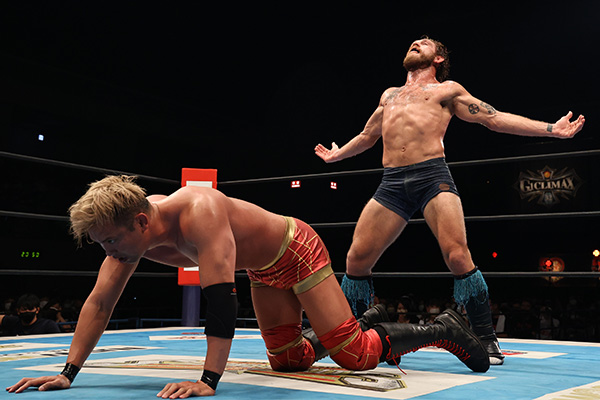 Lawlor kept expert control inside the ring, and used a head and arm choke to drive his foe to the ropes before a cravate and knees, but a mammoth dropkick, and then a shotgun blast from Okada cut the former STRONG Openweight Champion off. A reverse neckbreaker scored for Okada, and the 2021 G1 winner would throw some heavy elbows, but gave up his troubled arm to Lawlor in the process, and a barrage of strikes put the CHAOS leader to the mat for two. 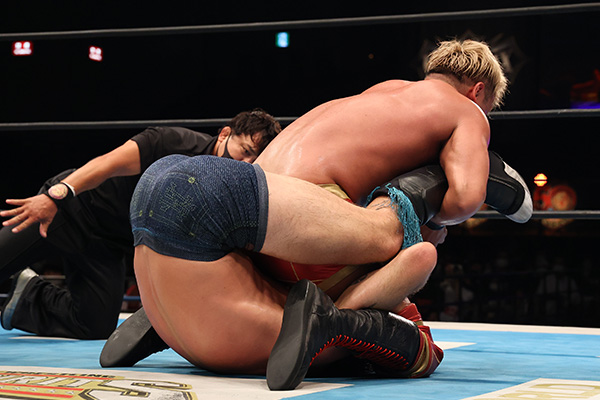 Lawlor sensed victory, and stretched both Okada’s arms into a Rings of Saturn, before working for St. Andrew’s Cross, Okada just barely making the ropes. Firing up the Hiroshima crowd, Lawlor looked for the NKOTB, but was dropped with Landslide; still Okada’s long weakened arm meant the Rainmaker was not possible. An uranage slam scored, and Lawlor rocked Okada with two short knees; Okada was pressured and had to try for roll-ups to escape the NKOTB, but still Lawlor stayed on the offense. An arm bar was locked in, but Okada shocked his foe with a flash win to just barely eke out victory. 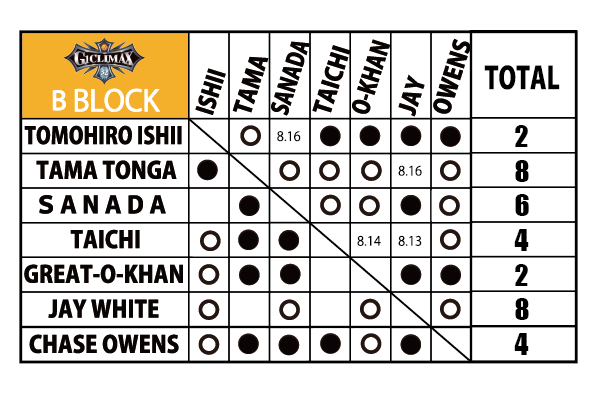 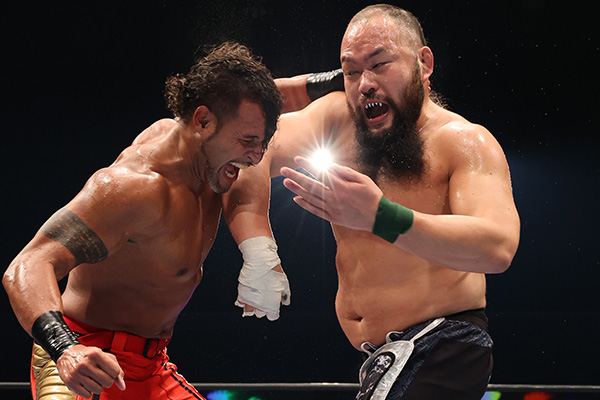 B Block saw Tama Tonga take on Great-O-Khan. O-Khan would out grapple and out power Tama in the early stages of the match, as the Dominator crushed his foe in the corner, but an unforced error saw Tama fire up in the face of his United Empire opposition. A snap suplex would cut the Hontai star off. Using the corner to his advantage, O-Khan piled on the damage, and followed up with a series of strikes before tossing Tama with an effective judo throw. 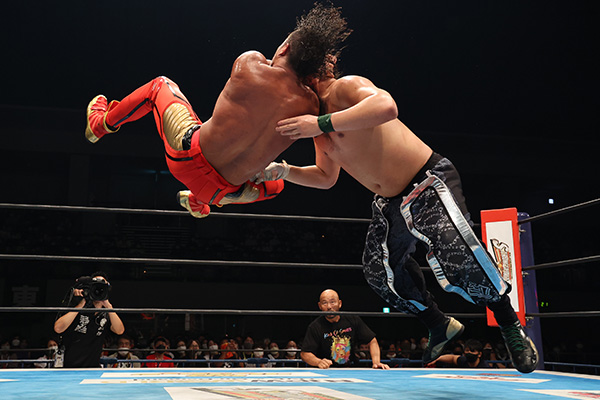 The two men would reset and trade elbow blows before O-Khan took over with Mongolian Chops. Tonga wouldn’t let O-Khan go for the kill as he caught his foe with the SRC and Supreme Flow, but O-Khan blocked the Gunstun, and caught Tama with an iron claw, and then the Subaru Ozawa Sheep Killer Luna, Tonga fading but not quite into unconsciousness. O-Khan wanted the Eliminator, but an instinctive Gunstun counter gave Tama two points. 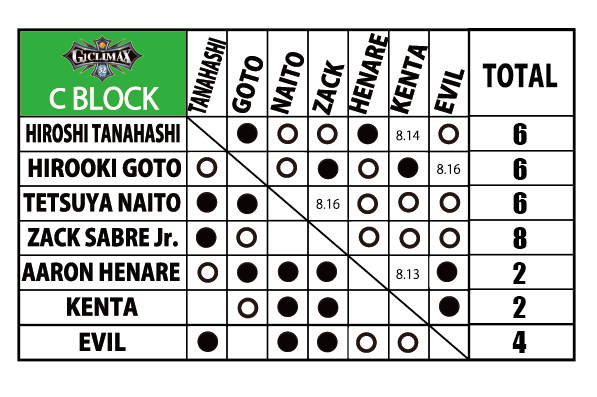 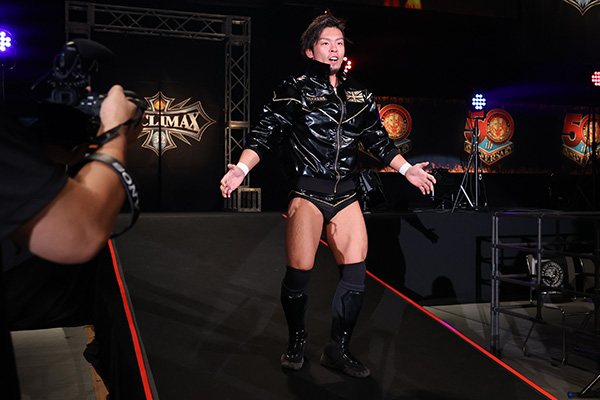 It was double duty for C Block with two feature matchups, starting with EVIL fighting for block survival against front runner Zack Sabre Jr. Sabre managed to distract EVIL and Dick Togo, using Kosei Fujita as an entrance decoy before setting to work at a furious pace on EVIL. The Euro Clutch quickly followed to force EVIL out in just 44 seconds of official match time. 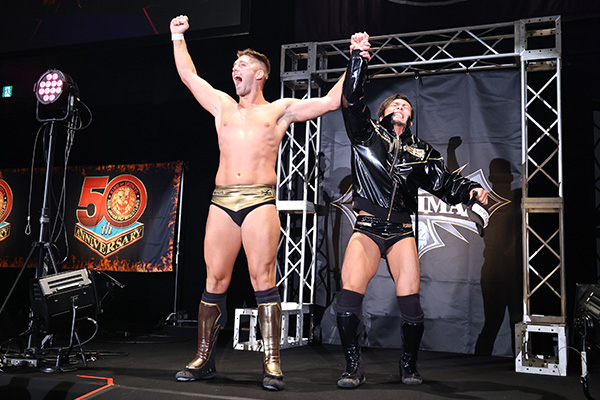 In the main event, it was old enemies Hirooki Goto and Hiroshi Tanahashi taking one another on, Goto needing a victory to keep both himself, and through tie breakers, Tetsuya Naito alive. After early pressure from the Ace, Goto tried to build momentum, but would be cut off with a basement dropkick, eventually finding space with a misdirection lariat. 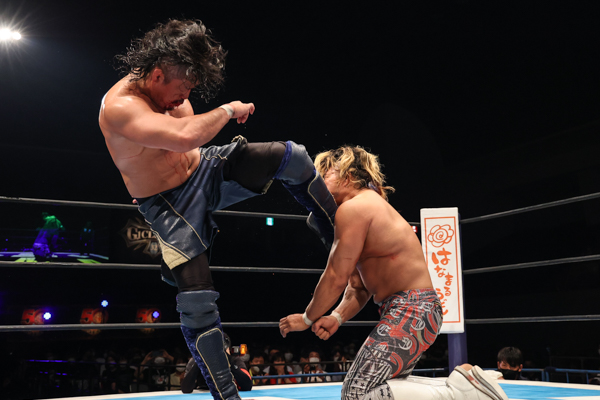 Tanahashi stalled Goto’s momentum with a reverse Slingblade before locking in a Texas Cloverleaf. As the match passed ten minutes, Tanahashi wanted a Dragon Screw through the ropes, Goto just barely fighting out the situation before heading upstairs. As Tanahashi joined him, Goto thought of the Revolution off the second rope; despite Tanahashi getting a superplex counter, Goto responded with the Shoryu Kekkai and then Ushigoroshi. 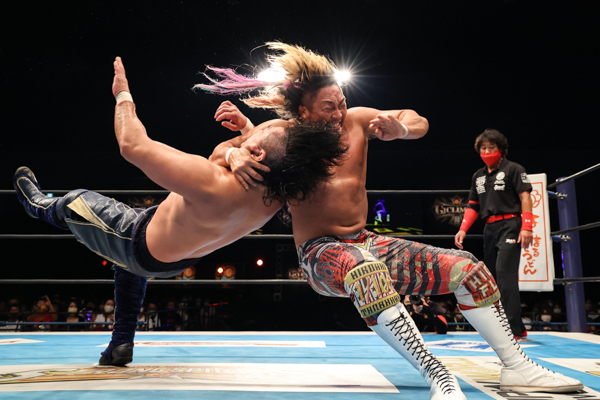 Both men’s will to win being tested, Tanahashi and Goto traded elbows and then a headbutts before a Dragon swat to Goto; collapsing to the mat, he would inadvertently headbutt the CHAOS member low, slowing Goto further. Tanahashi landed Slingblade and went up for the High Fly Attack, but the follow up High Fly Flow missed. By now, blood was pouring from the mouth of Goto after Tanahashi’s palm strike, but he kept fighting regardless, and dropped the Ace with a one man Shoto. 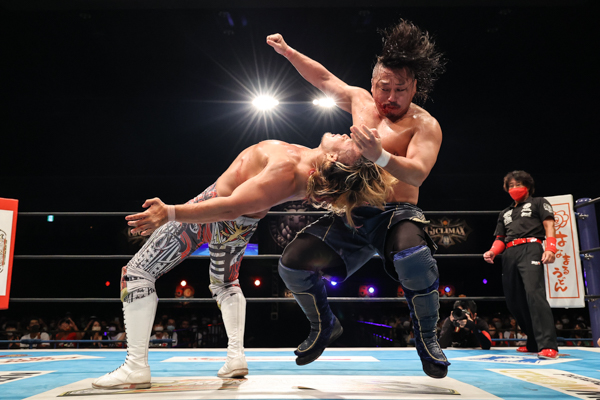 Tanahashi countered a GTW with an inside cradle for a very near two, and landed two Twist and Shouts, but Goto willed himself to hit Shoten Kai. GTR followed and Goto picked up two critical points, vowing to shine a light through all the darkness in the world, and tell everyone what the G in G1 stands for. 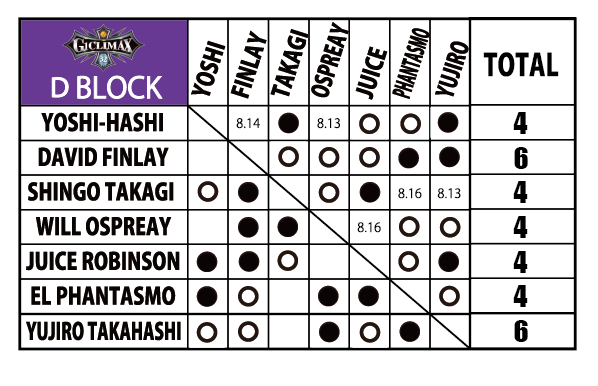 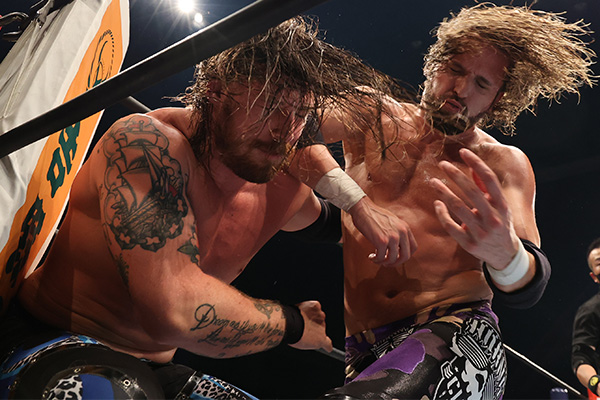 With everyone still alive in D Block, El Phantasmo took on David Finlay. Still with hopes of a sizable tie that could see him through, Phantasmo tried to take the fans out of the match, and his showboating would bring the crowd on side in even exchanges and a series of roll-up near falls. As the pace of the bout quickened, Finlay would miss a plancha, before being taken out with a tope suicida.  Phantasmo pressed the first significant advantage of the match at the five minute mark, and a Too Sweetsault and springboard swanton saw him in the plus position. 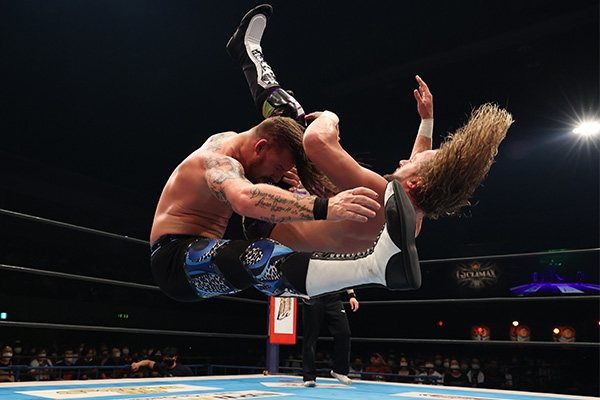 ELP was thinking CRII when Finlay head scissored out of danger and exploded with a plancha, and an Irish Curse led to a Blue Thunder Bomb for a nearfall. Sensing victory was nigh, an Acid Drop got two, but another trip upstairs led to a step up enzuigiri and top rope Frankensteiner from ELP, Thunder Kiss ’86 following for a near two. After a series of high paced counters, a crucifix pin saw ELP to a flash victory. 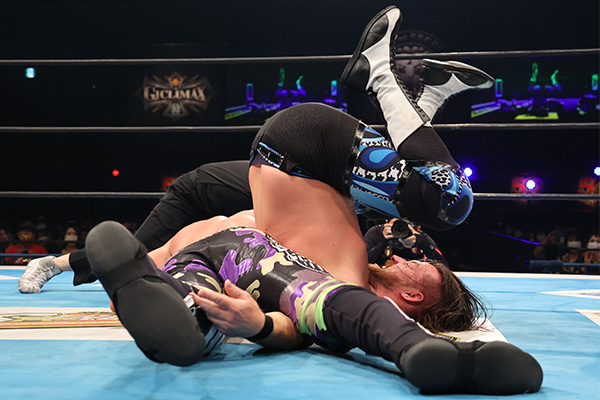