Intensity continues to build in Machida 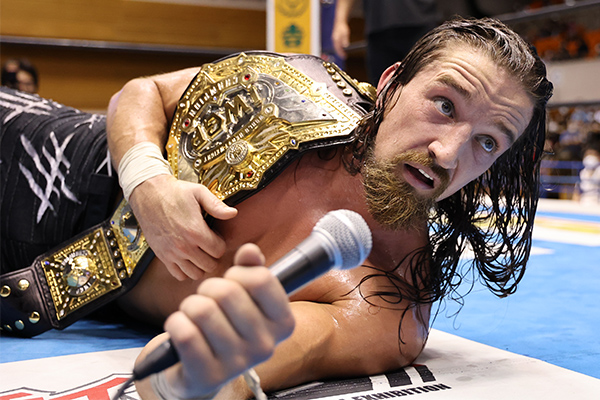 The G1 Climax hit Machida on August 13, where an enthusiastic crowd braved the effects of Typhoon Meari to witness tumultuous action across the four blocks.
Watch the replay now! 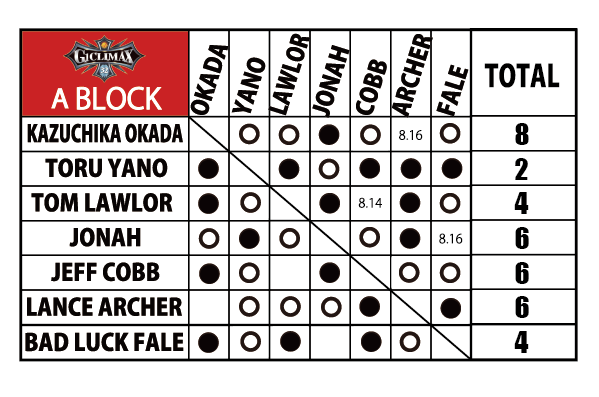 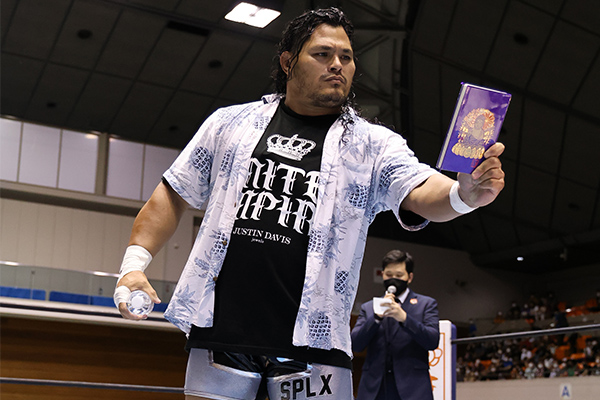 In A Block, Jeff Cobb stayed alive with a victory against Toru Yano. Mocking the CHAOS producer, Jeff Cobb headed to the ring with Yano style gear and a Yano esque ring introduction. Yet after a long delayed entrance was used as a distraction, the real Yano did show up and attempted to back door his way to a schoolboy victory. 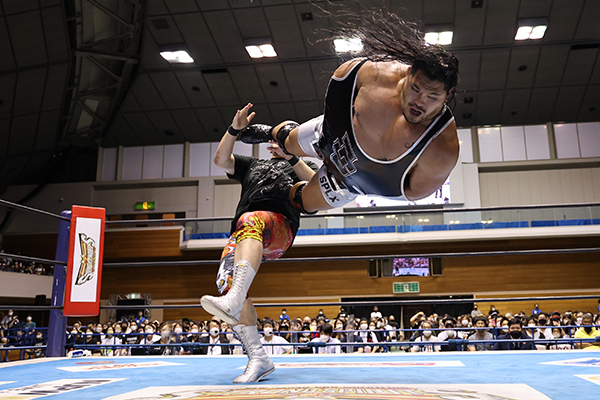 Putting his ingenuity to use, Yano had Cobb in trouble as he rolled the Imperial Unit in the ring apron and stuffed Cobb’s arms inside his singlet. Almost counted out, Cobb forced his way back into the match, and sacrificed his face to land a big dropkick before working free. With both hands to use, Cobb landed a big overhead suplex, and finally a Tour of the Islands to stay mathematically in the A Block hunt. 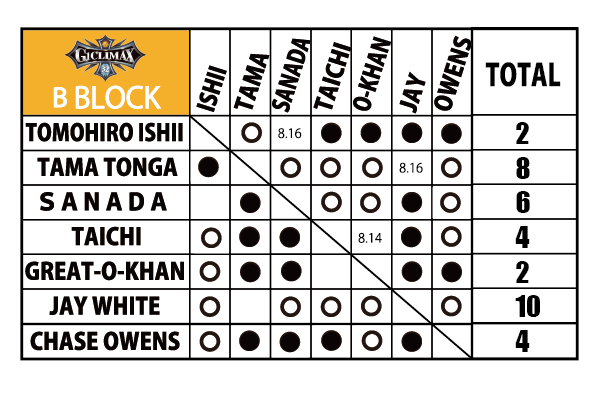 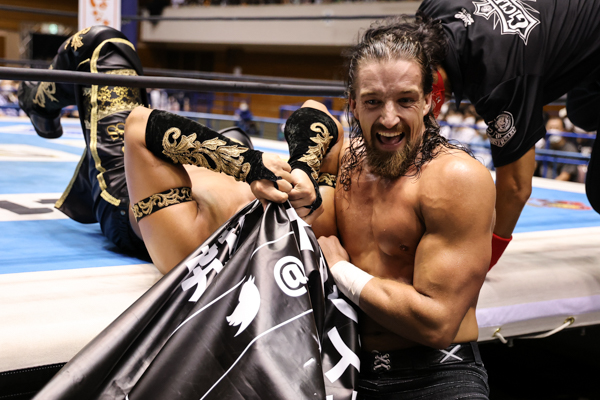 B Block was already effectively a two horse race by the time Saturday night. Ame around, but Jay White put things beyond doubt in the main event with a victory over Taichi. Ever the masterful tactician, White had the tactical edge over even the cognitive Taichi, who tried to bait the Switchblade into a sumo contest to no avail. 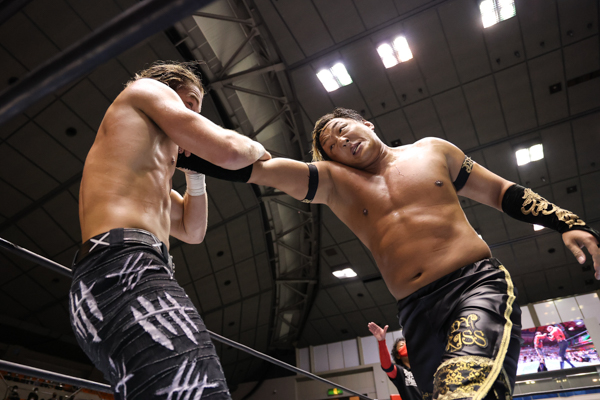 Instead, White took full control, and homed in on Taichi’s throat. As ever, the IWGP World Heavyweight Champion was driven to take the air out of his opponent’s lungs, and did so effectively through fair means and foul. As Taichi tried to get some wind in his metaphorical sails, White and Gedo saw to it that Taichi was emotionally conflicted and unable to focus; Gedo seized Miho Abe by the hair and the angered Taichi was drawn away from his opponent. 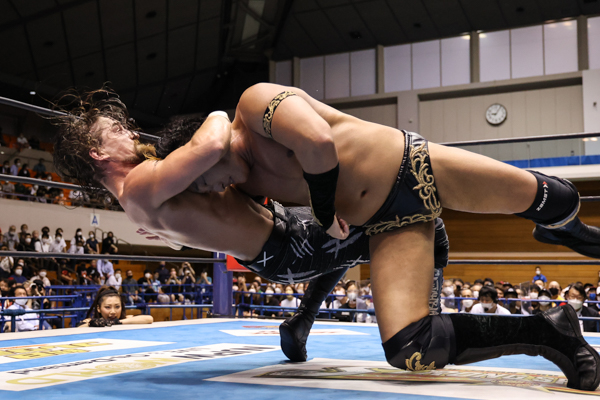 Yet protecting Abe was instead a powerful motivator, and as Yoshinobu Kanemaru emerged from the announce position at ringside to back him up, Taichi started to mount offense. His signature Last Ride Powerbomb and Dangerous Backdrop came within a hair of finishing the champion, but Taichi was unable to hit Black Mephisto. Jay White was able to just slip off the hook and drive Taichi down with a Bladerunner but was unable to make a cover; instead he would hoist Taichi up once more, and though Taichi had one more desperate grasp of his opponents’ throat, it wasn’t enough. A second Bladerunner saw White sitting clear on a perfect 5-0 and ten points at the top of his block. 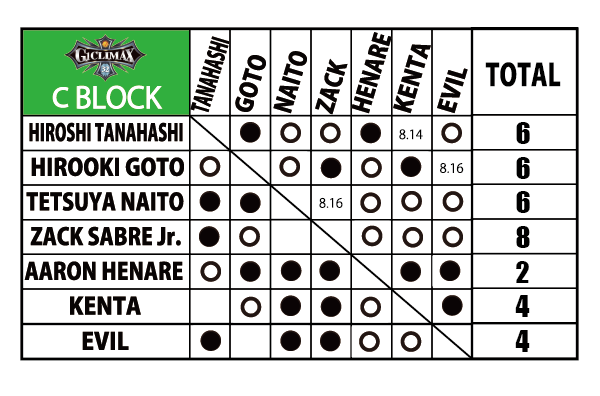 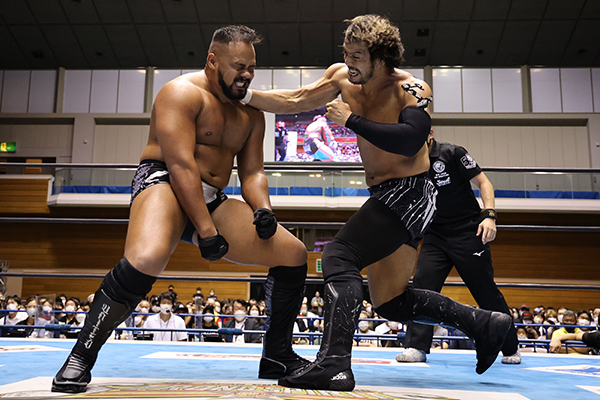 C Block saw a match between Aaron Henare and KENTA that was not going to decide the group with both men eliminated, but was a fight for pride for the Ultimate Weapon especially. Henare wanted to test striking ability against KENTA and landed some impressive shots, with body blows especially paying dividends. KENTA meanwhile would drive his offense toward the Achilles of his foe, slowing Henare and damaging the base for his kicks to post from. 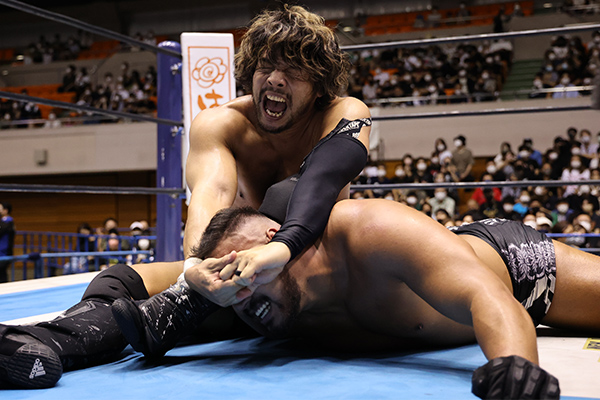 Henare would find the Ultima full Nelson, but KENTA would draw in the referee and use a body scissors to escape the clutch. While he was unable to find the Go2Sleep, he would be able to take the Ultimate Weapon down into Game Over to secure a tap out win. 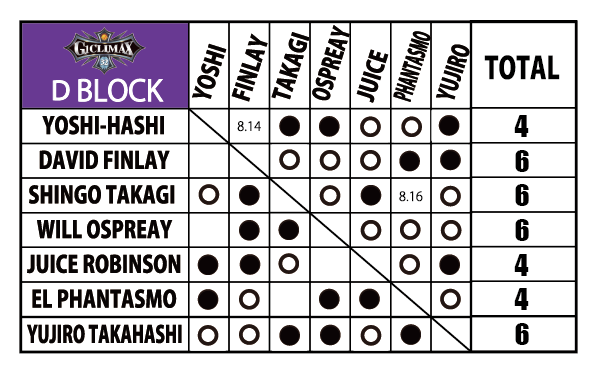 D Block saw two matches that preserved a chaotic balancing act with two more making it to six points; first being Shingo Takagi who emerged with the win over Yujiro Takahashi. 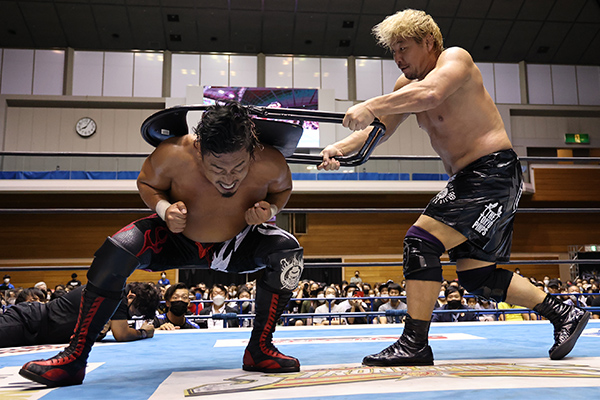 It was no easy task for Shingo, with Takahashi able to cut more than a few corners on the way to holding an upper hand. Assisting in the corner clipping much of the way was SHO, who soon made an appearance with a wrench, and then put a steel chair to use. At one point it seemed like Yujiro would get a Pimp Juice victory, and at another a repeat of last year’s double countout draw, but the resolute Shingo denied both and soldiered on. 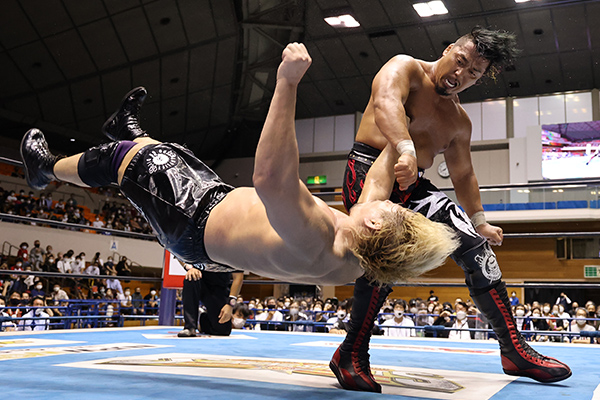 Made In Japan got two for Shingo, but with the referee out of the action, it seemed like Yujiro would have the match won with a brutal chairshot to the back and neck. Incredibly, the strike only succeeding in bringing fire and fury from Takagi, who roared at the Tokyo Pimp with a crushing Pumping Bomber and then Last of the Dragon to move himself to six points and end Yujiro’s campaign at same. 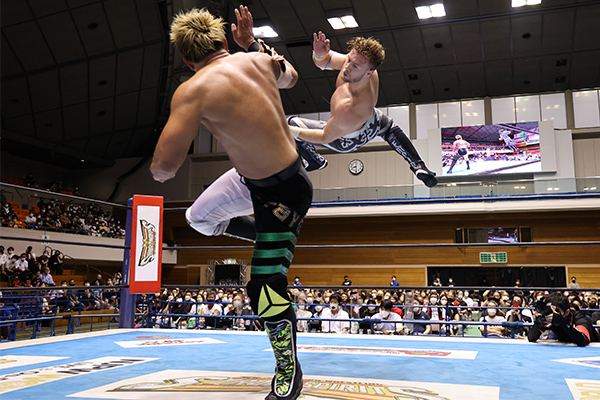 Joining Shingo at six was Will Ospreay, who defeated YOSHI-HASHI in a thrilling bout. The Headhunter entered the ring with his right shoulder heavily taped for the semi-main of the card, and this was always going to be the target for the IWGP United States Champion, who was vicious and effective throughout.
YOSHI-HASHI could only hope to threaten through sheer tenacity, and did just that. His much feared stinging chops found their mark throughout the entire bout, doing significant harm even as they were impeded by the weakened shoulder. YOSHI-HASHI’s feet would do even more harm, and swung the match to the Headhunter when Ospreay looked for the OsCutter, a thrust kick scoring out of midair to seemingly steal the match away from Ospreay.
YOSHI-HASHI would hit Karma, but couldn’t follow up with a cover in time; his heart and instincts responding with a last moment kick out after another OsCutter scored for Ospreay. YOSHI-HASHI would fire back with Kumagoroshi and a Destroyer for nail biting near falls, but brutal hook kicks, the Chelsea Grin and then the Hidden Blade sealed the deal. 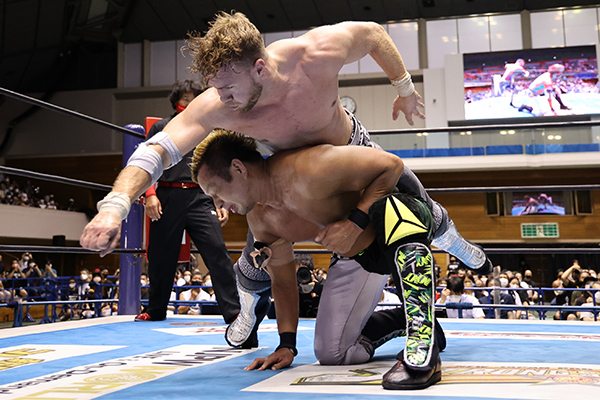 Action continues in Nagano Sunday, as Jeff Cobb and Tom Lawlor end their A Block campaigns opposite one another, Great-O-Khan and Taichi have an unfriendly tour ended in B, KENTA seeks to spot Hiroshi Tanahashi in C Block, and D Block sees YOSHI-HASHI fighting for survival against David Finlay.
NEXT：Robbie Eagles Fall...