The G1 Climax 32 tour made its last stop before the final triple header in the Nippon Budokan Sunday, as four group matches set the stage for Tuesday’s final league night. 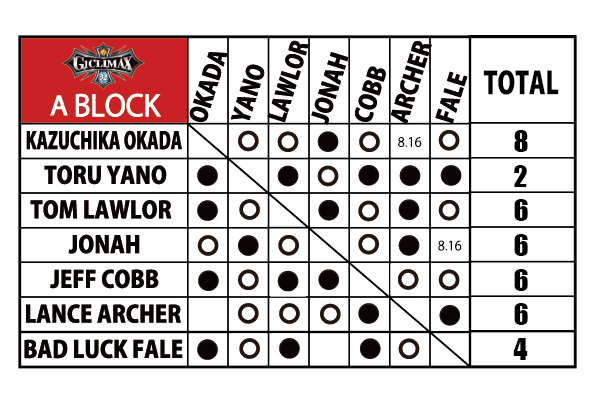 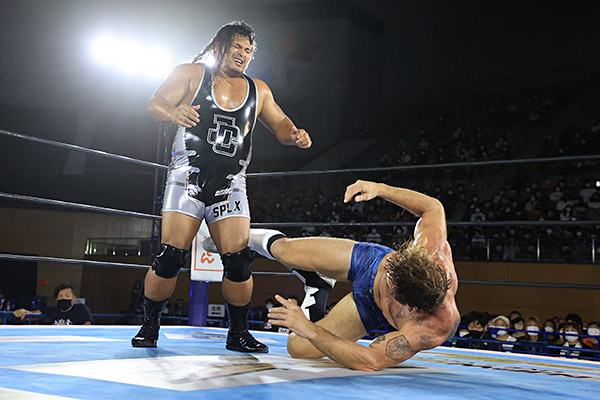 A Block saw Jeff Cobb, not on the last night of group action, looking to set his best number before watching Tuesday from the sidelines. He needed a win over Tom Lawlor, and tried to smother him on the mat, before hurling his foe clear across the ring. It was a charge into the corner though that saw Lawlor find a rear naked choke to counter, and both men tumbled out of the ring to the floor. 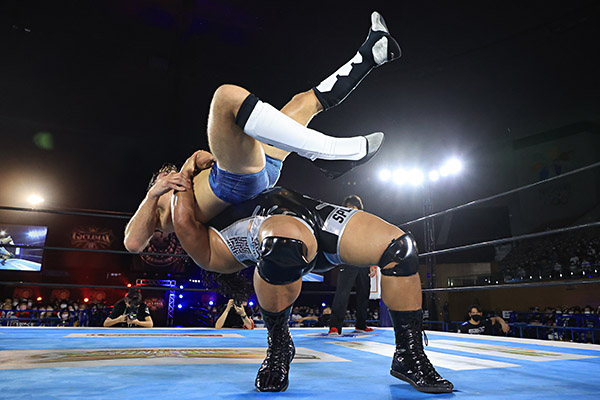 Outside, Cobb took control of the match, and went surfing on the back of the Filthy one at the five minute mark. Cobb’s power and confidence almost turned to hubris as Lawlor found punishing submission holds; the Imperial Unit popped his hips to send Lawlor flying, but the former STRONG Champion was able to find a single arm DDT and then an uranage slam to get two. 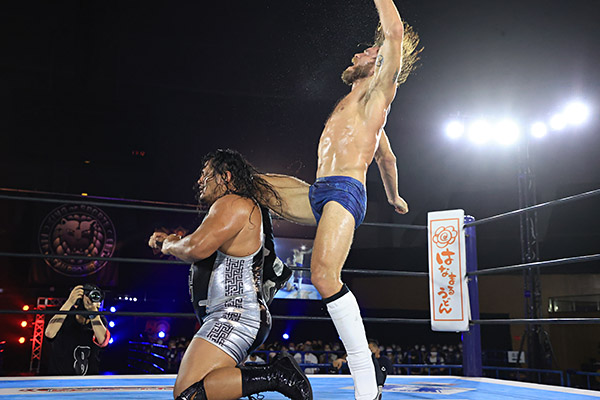 As the Nagano crowd got behind the match, Cobb once again suplexed Lawlor to the mat, and used a German suplex to cut Lawlor off as he tried to fire back with strikes. Thinking fast, Lawlor had wrist control and tried to Kimura the arm, before a Kamigoye that got a long two. As Cobb tried to escape the NKOTB, Lawlor got a Regal Plex, and then landed the move for a significant victory. 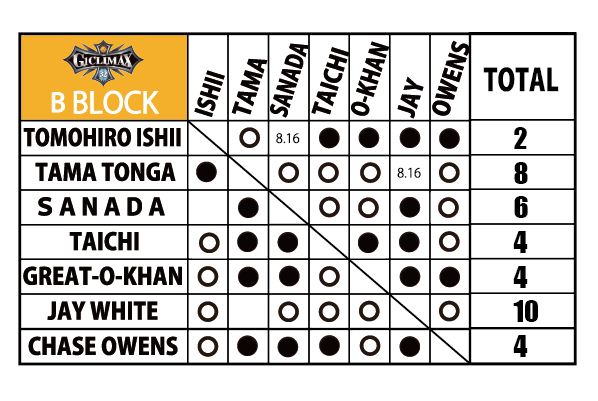 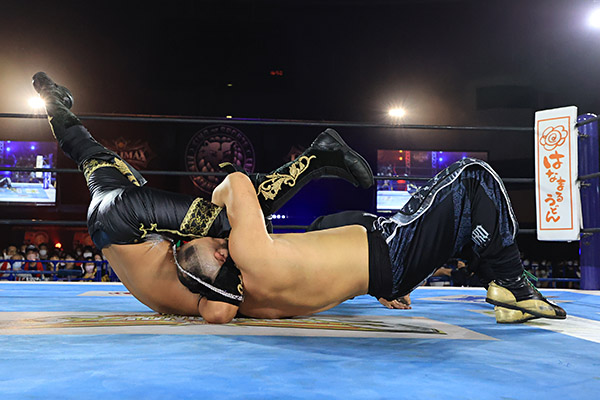 In B Block, Great-O-Khan and Taichi were fighting for pride in their last league bout. Each tried to lure the other into wrestling their kind of match, O-Khan wanting Taichi to come into his guard while Taichi wanted a sumo battle. A sumo battle is what Taichi got, before the match grew strike heavy. It was a judo throw that got O-Khan back into the flow though, and the Sheep Killer had Taichi struggling. With the claw firmly applied, O-Khan tried for the Eliminator, but was countered into the Gedo Clutch for a nearfall; O-Khan caught a snap suplex in return, and bridged for a sudden win to end the tournament at 2-4. 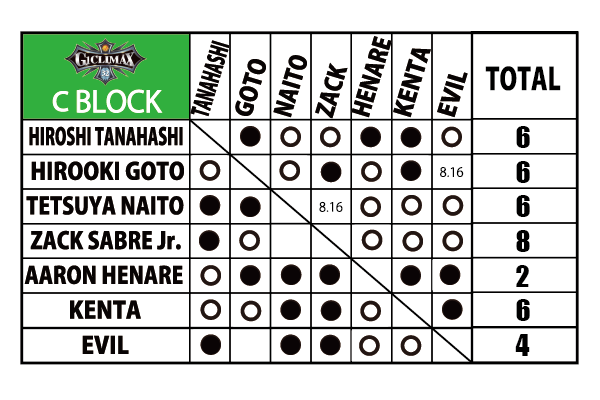 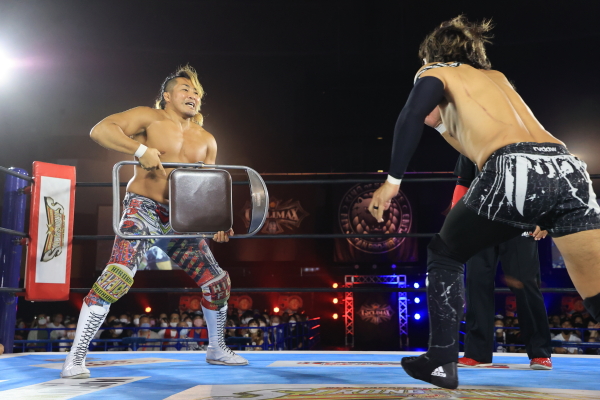 C Block saw the main event of the night, KENTA fighting to put Hiroshi Tanahashi out of contention. With a long and personal history, KENTA brought a chair into the ring as a ploy to bring Tanahashi out of his corner before taking control of the Ace with a painful kick to the spine. The powerful legs of the Ace did their job though, and a powerful push with the quads sent KENTA from the floor into the guardrails. After Tanahashi tried to keep the match inside the ring though, KENTA elected to push the envelope, pulling Tanahashi out to the hard floor before landing a DDT. 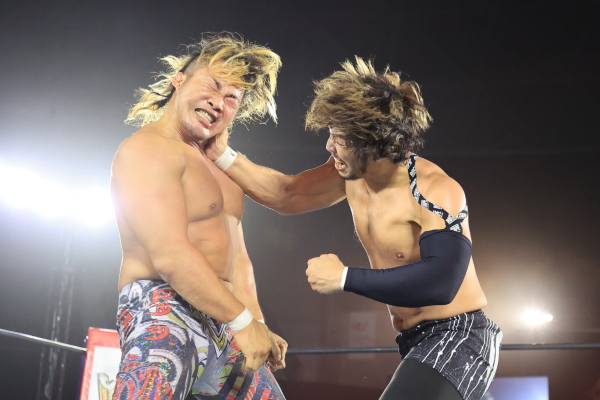 Tanahashi was controlled inside the ring and out by KENTA with body shots , before the Ace finally endured long enough to create an opening. A Dragon Screw and flying forearm scored, but KENTA responded with a powerslam. The BULLET CLUB member would try to draw Tanahashi into a standing exchange, but got perhaps more than he bargained for as Tanahashi battled back; as things got intense, referee Red Shoes Unno tried to step in between the two, but was inadvertently struck with a full force palm strike. 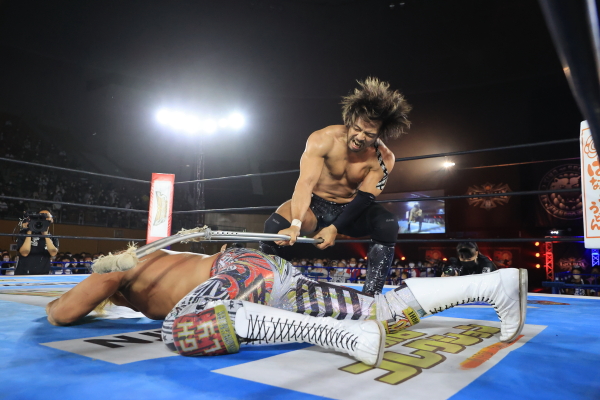 KENTA instantly took advantage of the situation, finding a crutch under the ring, and breaking it over Tanahashi. Delivering another DDT on the outside, KENTA set up a table at ringside; though a double stomp through the furniture was evaded by the Ace, the boots were buried into Tanahashi’s gut from the top rope in the ring instead. As Tanahashi kicked out, KENTA made sure the referee was once again downed as a result, and hurled the ringside table into the Ace’s head, but a Go2Sleep follow was countered with Twist and Shout, and then again with Slingblades in quick succession. 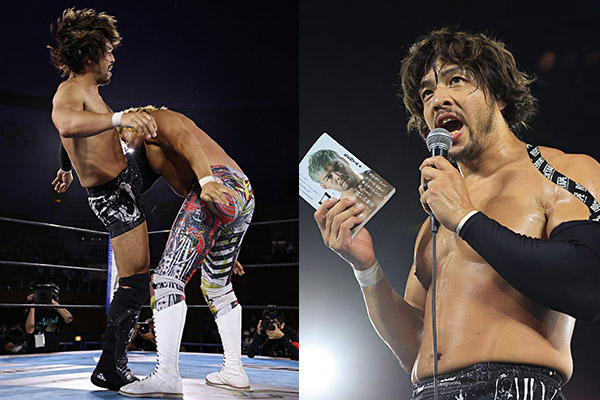 Tanahashi headed up for the High Fly Attack, but the High Fly Flow only found KENTA’s knees. KENTA created distance and scored the Busaiku for two; Go2Sleep was once again countered into a small package, but KENTA kicked out and reared back with overhand rights, a one-two and then Go2Sleep for the three count. 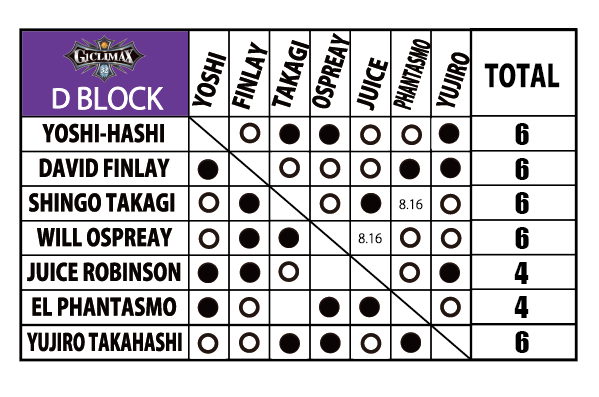 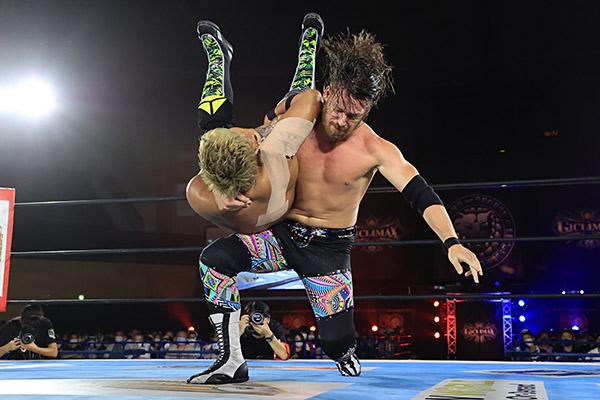 David Finlay started the day’s league action in shape to end D Block before it reached the Budokan if he was able to get a win over YOSHI-HASHI. Finlay would instantly target the injured right shoulder of the Headhunter, but YOSHI-HASHI would power through the pain to land his infamous chops. Finlay would soon land Divorce Court on the arm though, and dictated the pace going forward as the CHAOS member tried to come from underneath. 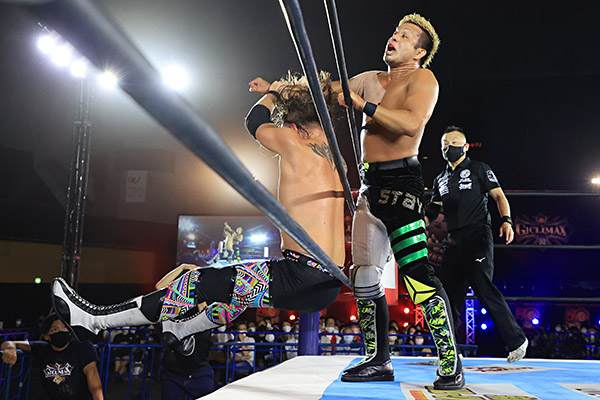 Finding a response with a dropkick, YOSHI-HASHI landed chops and the Headhunter, but couldn’t get Finlay up for Kumagoroshi, instead having to trade strikes with his bad arm. Giving up the standup advantage, the CHAOS member fell victim to a trio of Irish Curse backbreakers, but was able to prevent Trash Panda and get some space with a kick that sent Finlay sprawling to the apron. The advantage didn’t last as Finlay dropped his foe over the top rope shoulder first, and then landed Prima Nocta. YOSHI-HASHI twice bought space for himself, but couldn’t get Karma; instead a novel rollup would get a surprise flash pin three to keep him alive.