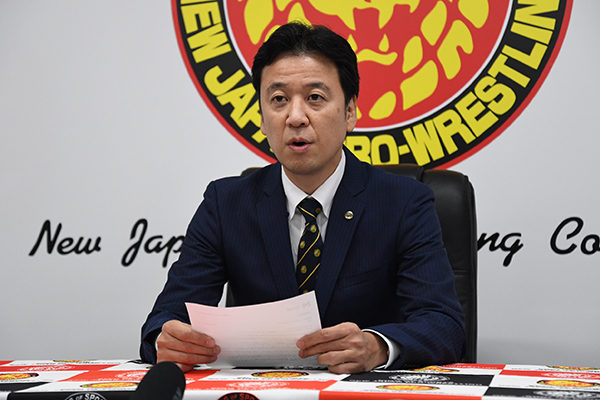 The post G1 Climax 32 press conference on August 19 saw Kazuchika Okada give his first address to the assembled media with the G1 trophy. Beforehand though, President Takami Ohbari had a special statement to make.

‘Hello everyone. Thank you for watching. Yesterday, the G1 Climax 32 series came to a close. 28 wrestlers from around the world competed across four blocks over a one month period across the country of Japan. Truly it was a tour that lived up to the tagline of ‘the toughest fight on record’. Ultimately, Kazuchika Okada was victorious over Will Ospreay in the final. It was a main event that more than lived up to the status and prestige of deciding the best wrestler of the summer.

We underwent the tour with a goal of bringing 50,000 spectators across our 20 events, and eventually achieved 96% of that goal. Over 48,000 fans attended G1 events this year, a 180% increase over last year’s G1. Thanks to all of you for being a part of G1 Climax 32. I myself met many fans who were coming to venues for the first time in two years or more. Many children were in attendance, and I even saw fans who were able to make the trip to see G1 from overseas. There were new fans, returning fans and international fans all experiencing the energy and power that the G1 creates. We all plan to bring that same energy with us through this 50th Anniversary year, right up until January 4 2023.

Finally, I want to make note of the fact that we were able to complete the tour without any cases of COVID arising. This is in no small part thanks to the efforts of all our great fans who were able to abide by our event protocols throughout the tour, and for that, and all your support, I thank you very much.’