Championship matches and a major homecoming set for Ryogoku

The National Sports Day holiday of the second Monday in October in Japan sees NJPW’s autumn Ryogoku event back in its rightful place in the calendar this year, harkening back to the 90s and early 2000s with Declaration of Power. With two title matches and the return of Ren Narita, drama is at every turn in Sumo Hall!

Watch Declaration of Power LIVE IN ENGLISH on NJPW World! 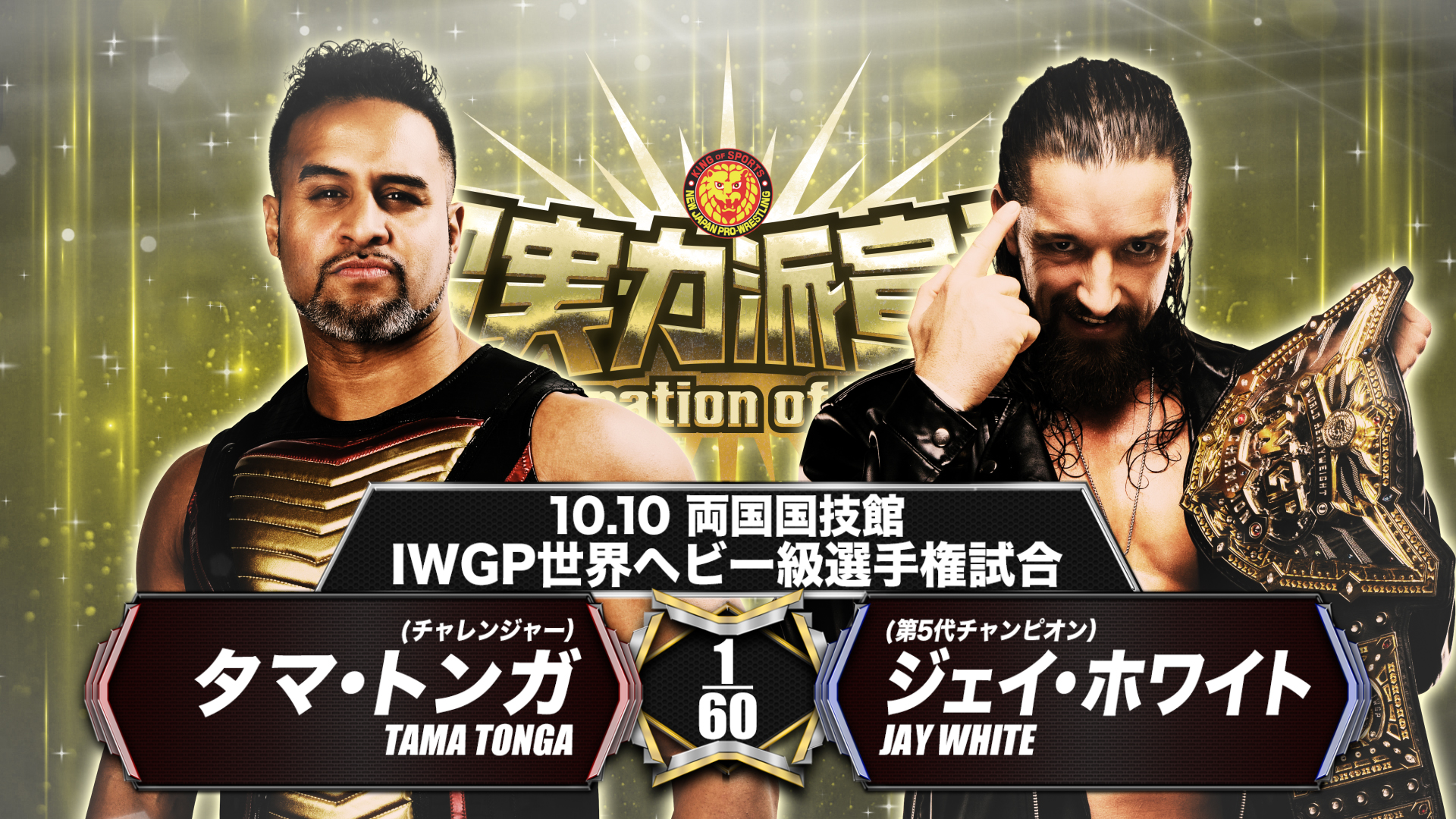 The main event of the evening sees Jay White look to defend the IWGP World heavyweight Championship for the second time against challenger Tama Tonga. It was back in February that a Bladerunner struck to remove Tama Tonga from BULLET CLUB, sparking a chain reaction that saw Tonga represent Hontai during the G1, fuelled with a burning desire for revenge as the former BC Kingmaker was driven to take down the King.

That he did on the last night of league action, and though Tama would fall to eventual tournament winner Kazuchika Okada in the semifinals, the statement was clearly delivered to the champion. Tama would ‘thank’ Jay White for letting him show the world that he can fly, and after an attack in Kobe, youngest brother Hikuleo would join the challenger’s side. After relieving White of his giant ‘Young Gun’ prospect, might he also relieve him of the world heavyweight title? 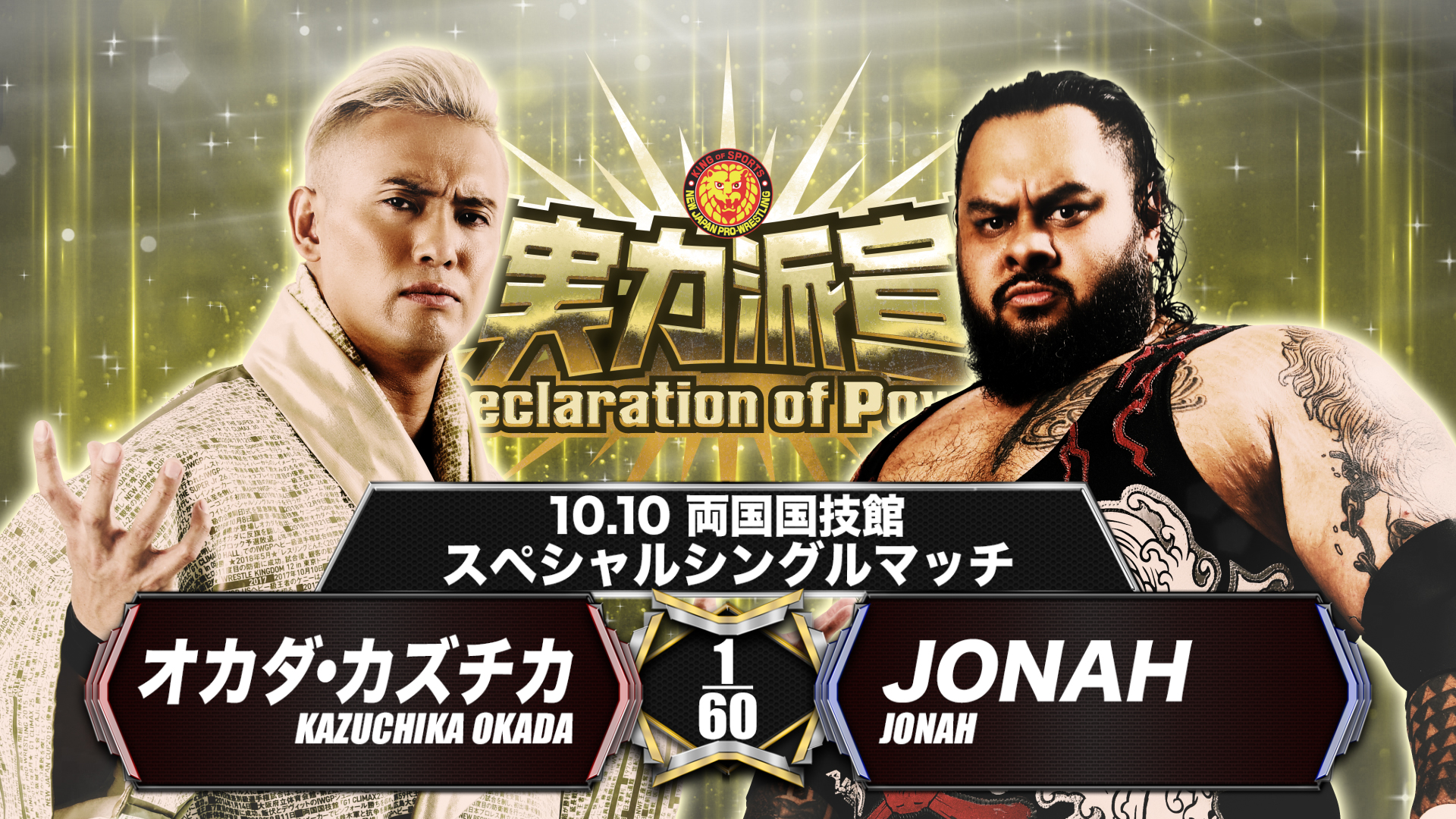 Kazuchika Okada’s second straight G1 Climax victory this summer in the Nippon Budokan saw even the best equipped fall to the Rainmaker. Yet a near flawless record had a sizable blemish when JONAH soared off the top rope to Okada in Osaka to stunned gasps of amazement. Unpinned and unsubmitted in a NJPW ring, JONAH has established himself as Top Dog in reputation if not status, and the latter will be assured if he can beat the CHAOS leader again in Ryogoku. Okada stated after winning the G1 that he wanted his spot in the main event at Wrestle Kingdom 17 assured, meaning the briefcase defences of old are gone this year. Yet should JONAH come out victorious tonight, he will be certainly able to call his own shots, suggesting in his comments of late that he wants to create a three way defence of the world heavyweight gold at the Tokyo Dome. As Wrestle Kingdom season approaches, can a big man make his way to the Big Egg? 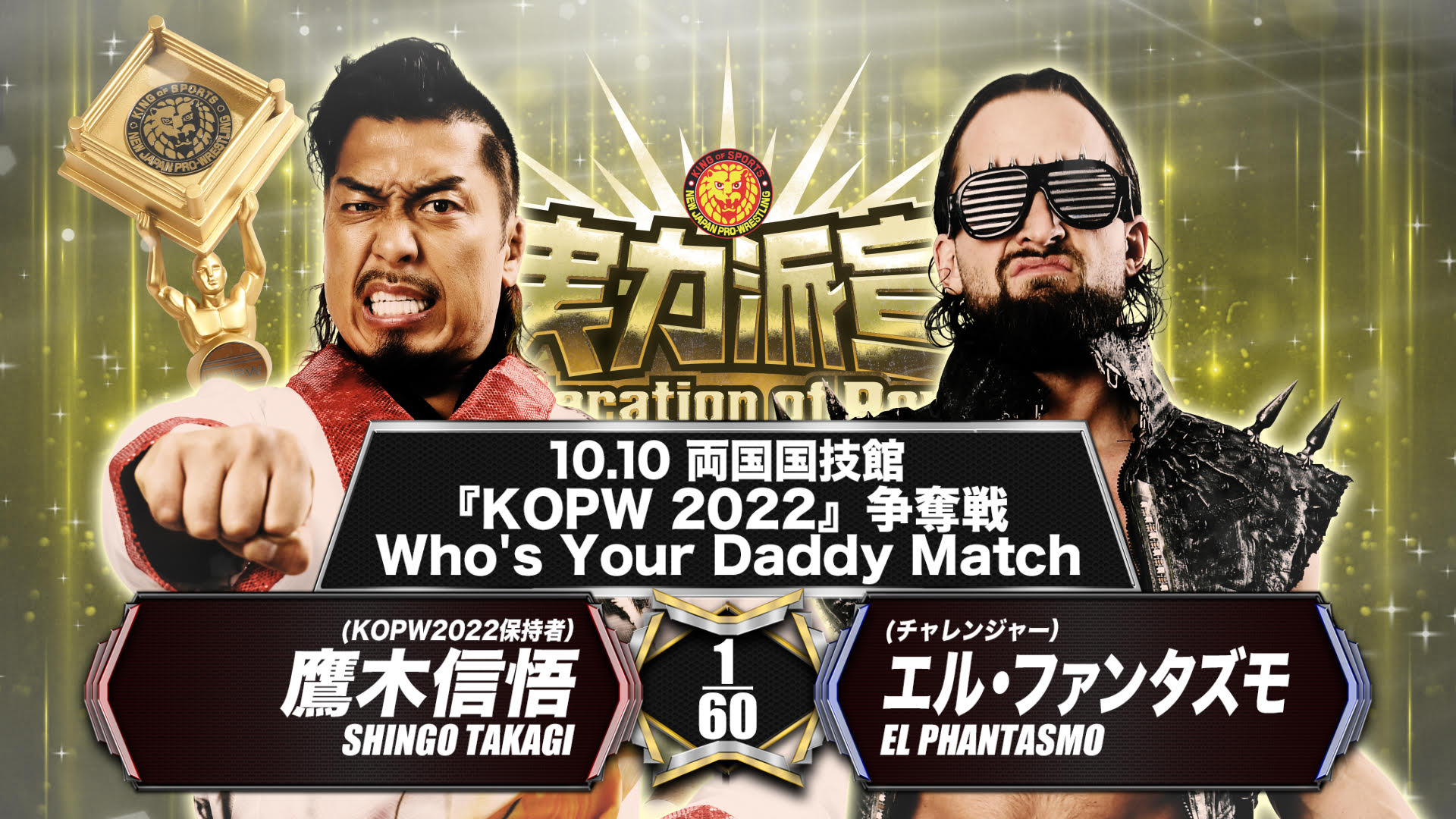 Another match established at the end of the G1 Climax, Shingo Takagi will defend his KOPW 2022 holder status, as he looks to erase a painful loss to El Phantasmo that eliminated him from the tournament’s D Block. If the loss itself wasn’t painful enough, ELP has rubbed salt in the wound on a consistent basis through the last tour, hailing himself ‘Shingo’s daddy’ and heaping embarrassment, and losses on his foe on a near nightly basis.

Takagi was able to turn the tide back in Kobe on September 25, as a debatable low blow followed by a Ground Cobra saw him grab a decisive, if controversial pinfall victory on Phantasmo. Post match, an argument erupted backstage that ended with a KOPW 2022 trophy defence made official. Both the trophy and pride will be on the line tonight, as the Who’s Your Daddy match will see the loser have to take an in ring mic and declare to the world that the winner is their ‘daddy’. 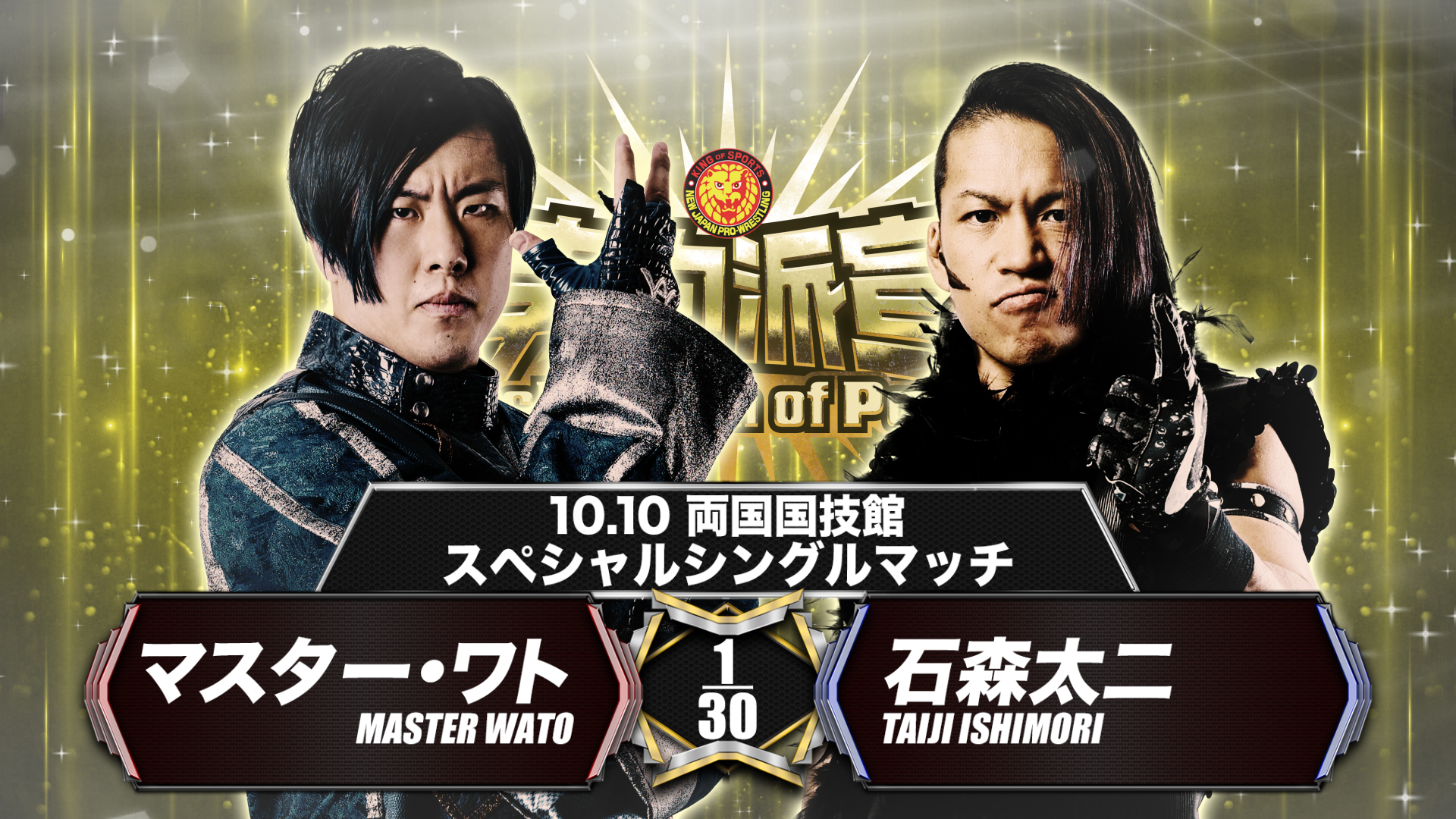 After making a surprise return to NJPW earlier this summer in Korakuen Hall, KUSHIDA had planned to challenge IWGP Junior Heavyweight Champion Taiji Ishimori right away, but the Bone Soldier was rather less than welcoming of the Timesplitter. Declaring that KUSHIDA had no right to ‘waltz into’ a title shot, Ishimori determined that the former six time title holder should be subject to an ‘assessment period’ during the Burning Spirit tour. Despite KUSHIDA’s activity in the US and Japan that included a direct pinfall over Ishimori at the G1 Climax final in tag team action, a last minute illness at the back end of the previous series saw him, in the champion’s eyes, ‘fail’ the assessment as laid out, and with his recovery continuing, a non title singles match was off the books for Monday night.

In KUSHIDA’s place stepped Master Wato, who offered the prospect of a ‘new assessment’. The blue haired prodigy has dropped his last two singles matchups with Ishimori, but feels he’s made significant growth through 2022, and will look to show the benefit of that progress tonight. Could he be looking at a future championship opportunity? 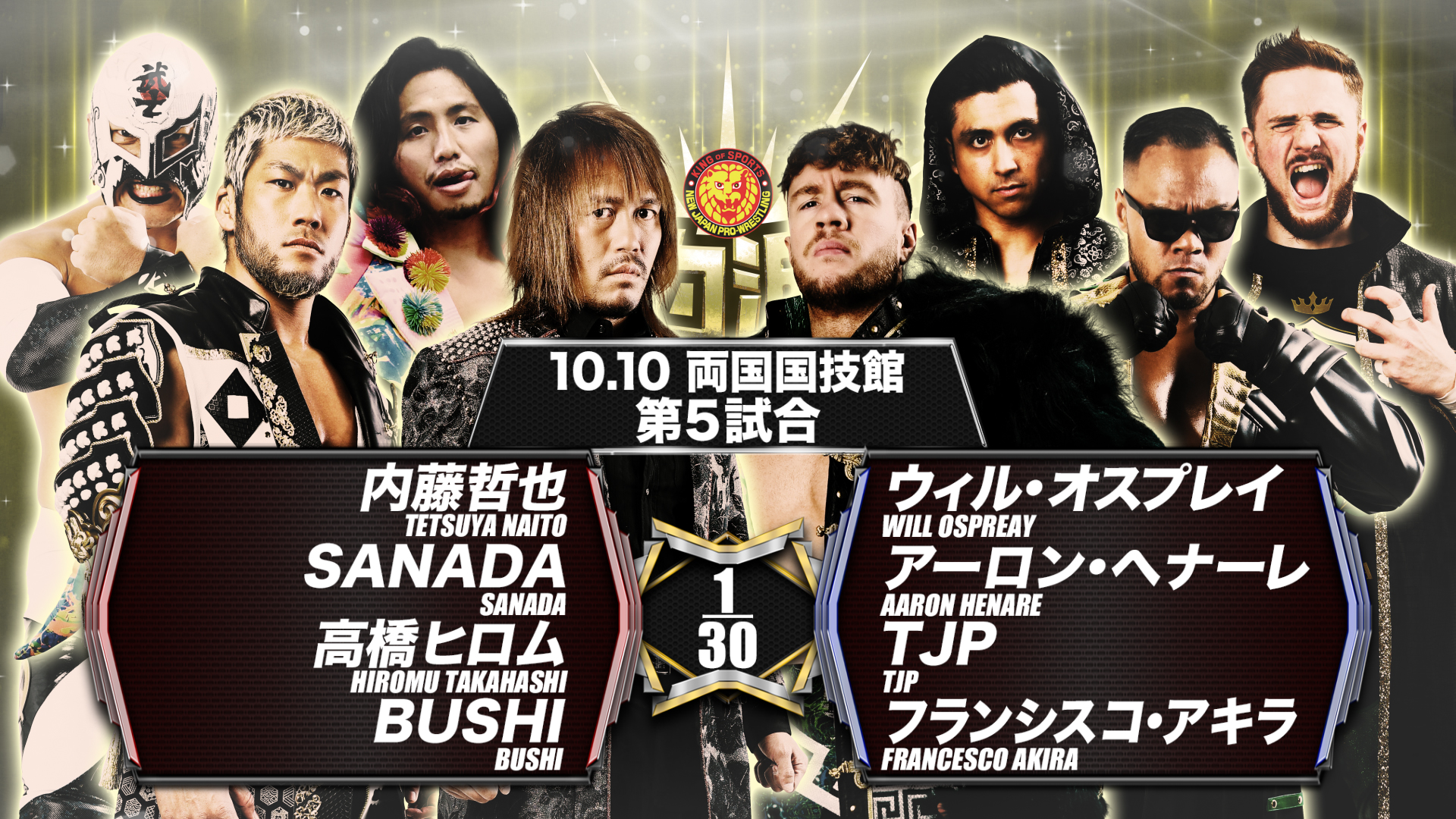 Following Burning Spirit in Kobe on September 25, Tetsuya Naito made an uncharacteristic appeal to the IWGP United States Heavyweight Champion Will Ospreay. While Naito’s eyes have never been on the red and gold US belt, a wrestler of the year front runner and the man that defeated him in the G1 Climax semifinals earlier this summer in an instant classic is certainly an attractive prospect, and after the events of Royal Quest in London adding further fuel to the fire, Naito wants to get back in the ring to get direct contact with the Commonwealth Kingpin in Ryogoku. Both Naito and Ospreay have won IWGP Heavyweight and World Heavyweight gold in Ryogoku; could this match get a glimpse into the future of the US title? 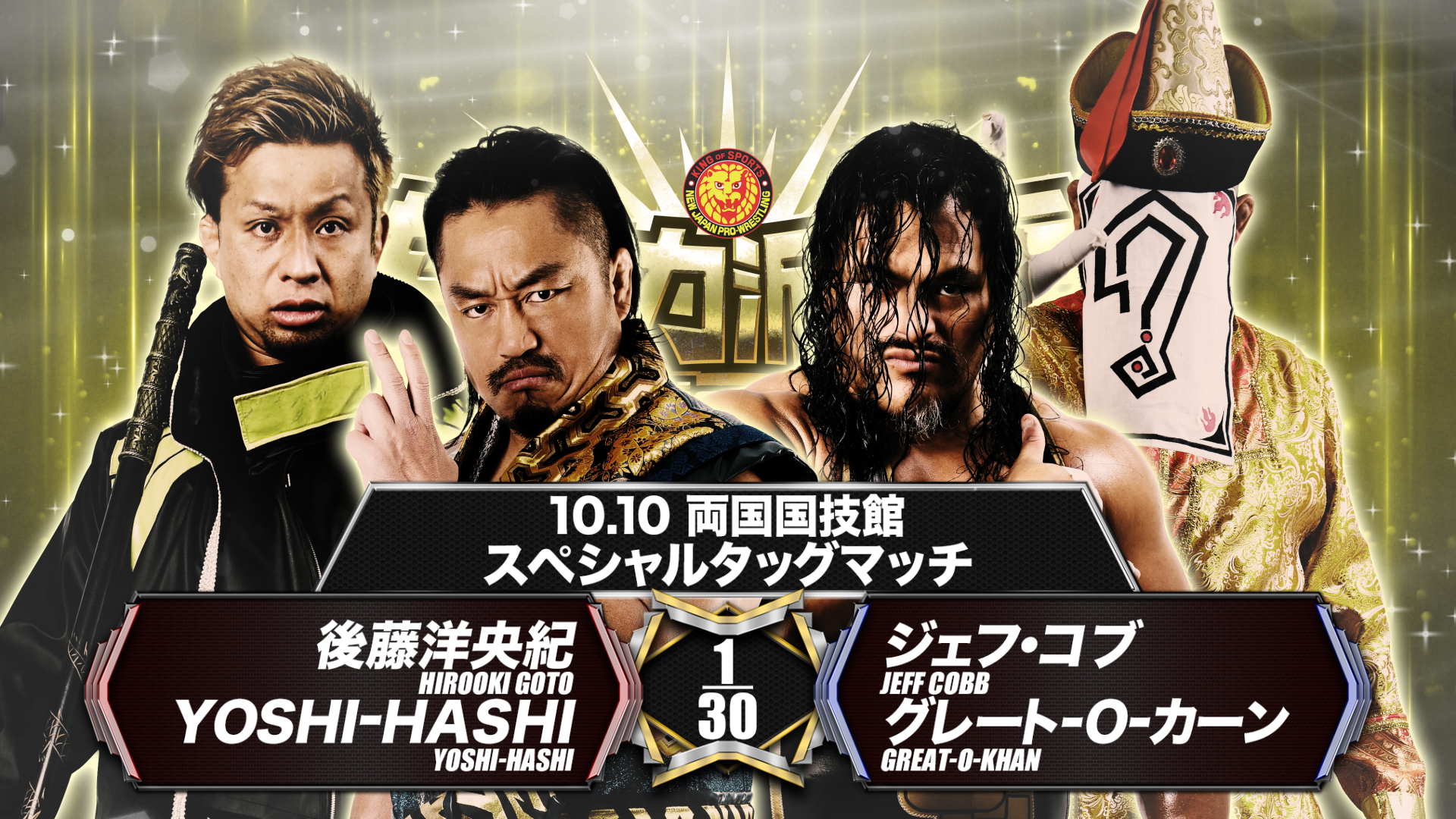 Ever since FTR won the IWGP Tag Team Championships in Chicago at Forbidden Door back in June, teams have been vying for a chance to bring the gold back to Japan. Former champions Jeff Cobb and Great-O-Khan moved to the top of the line when they defeated Bad Luck Fale and Chase Owens in Kobe, declaring themselves next to face the winner of FTR and Aussie Open from Royal Quest. Yet now the champions before them in Bishamon have stepped forth to stake their own claim. In April here in Ryogoku, Cobb and O-Khan defeated Hirooki Goto and YOSHI-HASHI to lift IWGP gold for the first time, but with a 1-1 record between the two teams, it’ll be the winner of this rubber match that likely will be next in line for the tag gold. 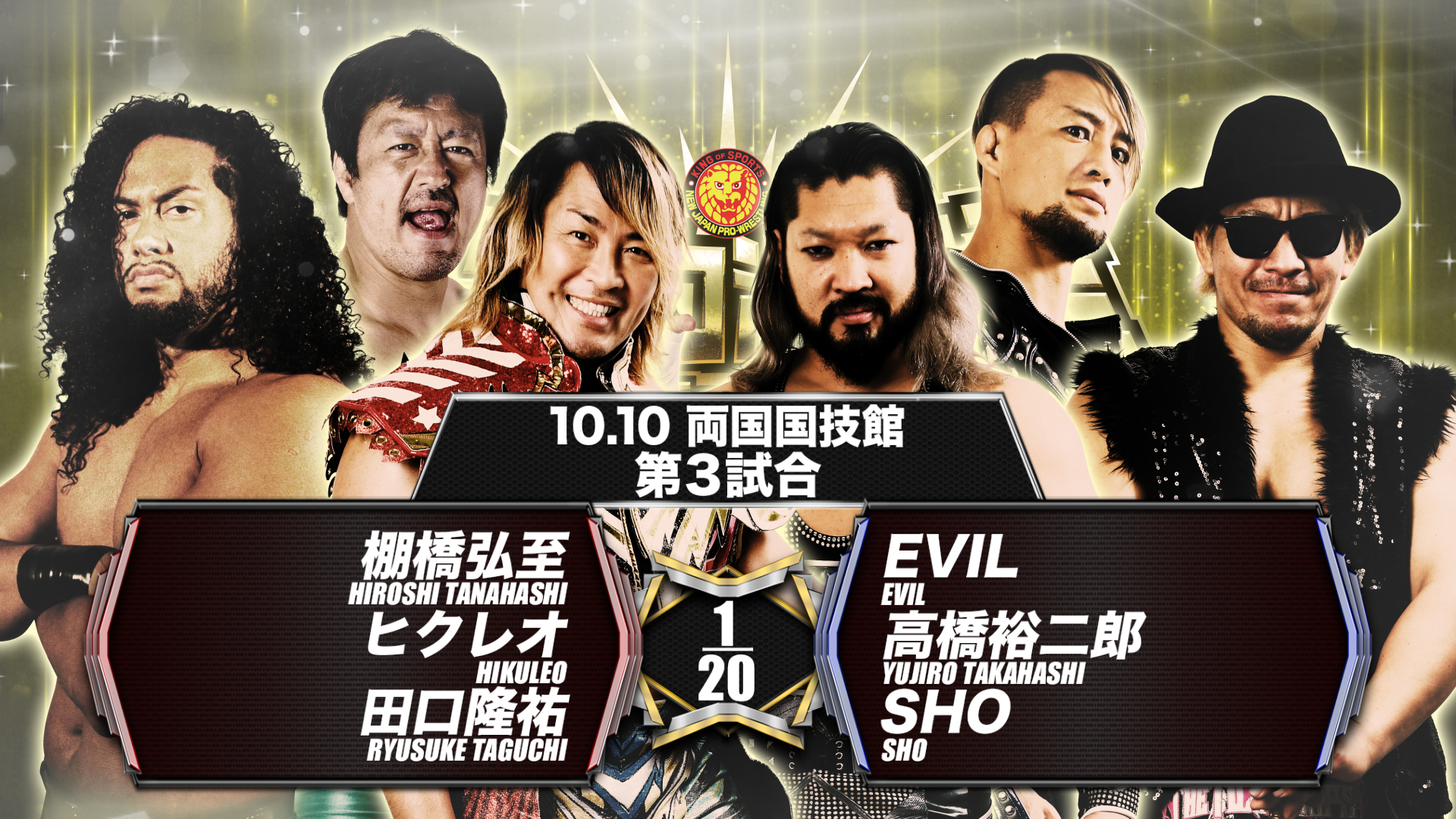 Shouts of delight erupted from the crowd in Kobe on September 25 when Hikuleo embraced his brother Tama Tonga center ring. Formerly BULLET CLUB’s Young Gun, Hikuleo had chosen to stay with Jay White in the group earlier in the spring even as Tama and Tanga Loa was turned aside, but he refused to lay hands on his family, even as Loa confronted his ‘big little brother’ in Washington DC earlier this year. As Hikuleo seemed to remain conflicted, he would make up his mind in Kobe, and joined Tama and Jado in tag matches in London. Now Hikuleo will join forces with the Ace and Arse Connection of Taguchi and Tanahashi to take on NEVER 6 Man Champions HOUSE OF TORTURE in non title action. 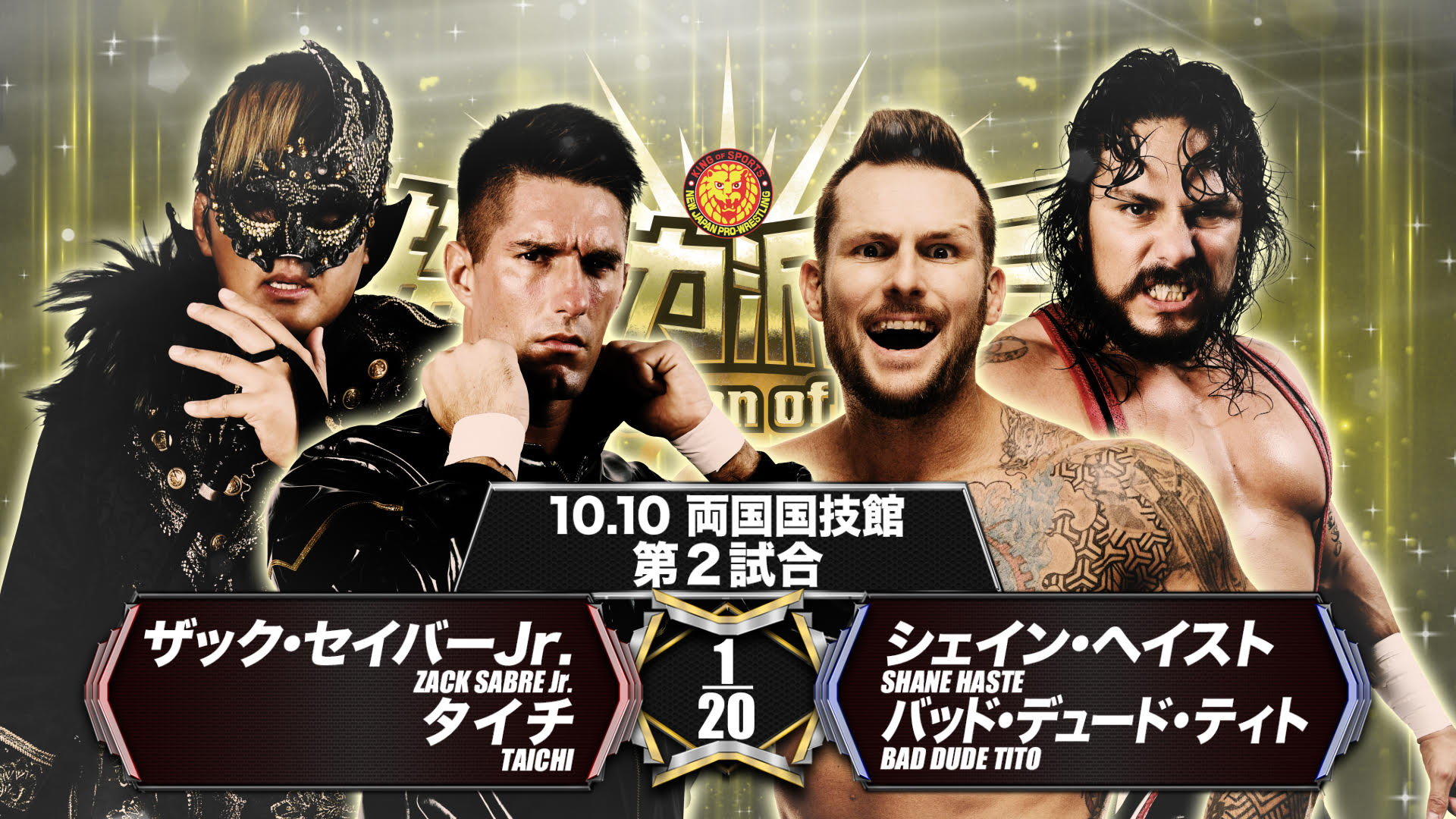 Tag team action in Ryogoku will see Dangerous Tekkers take on Bad Dude Tito and Shane Haste. With TMDK becoming a consistent force in NJPW in Japan as well as on NJPW STRONG, the factional power struggle in NJPW on both sides of the Pacific is becoming more intense. Tonight will see ZSJ and Taichi look to make a decisive statement on behalf of Suzuki-Gun, while potentially setting the scene for World Tag League in November. 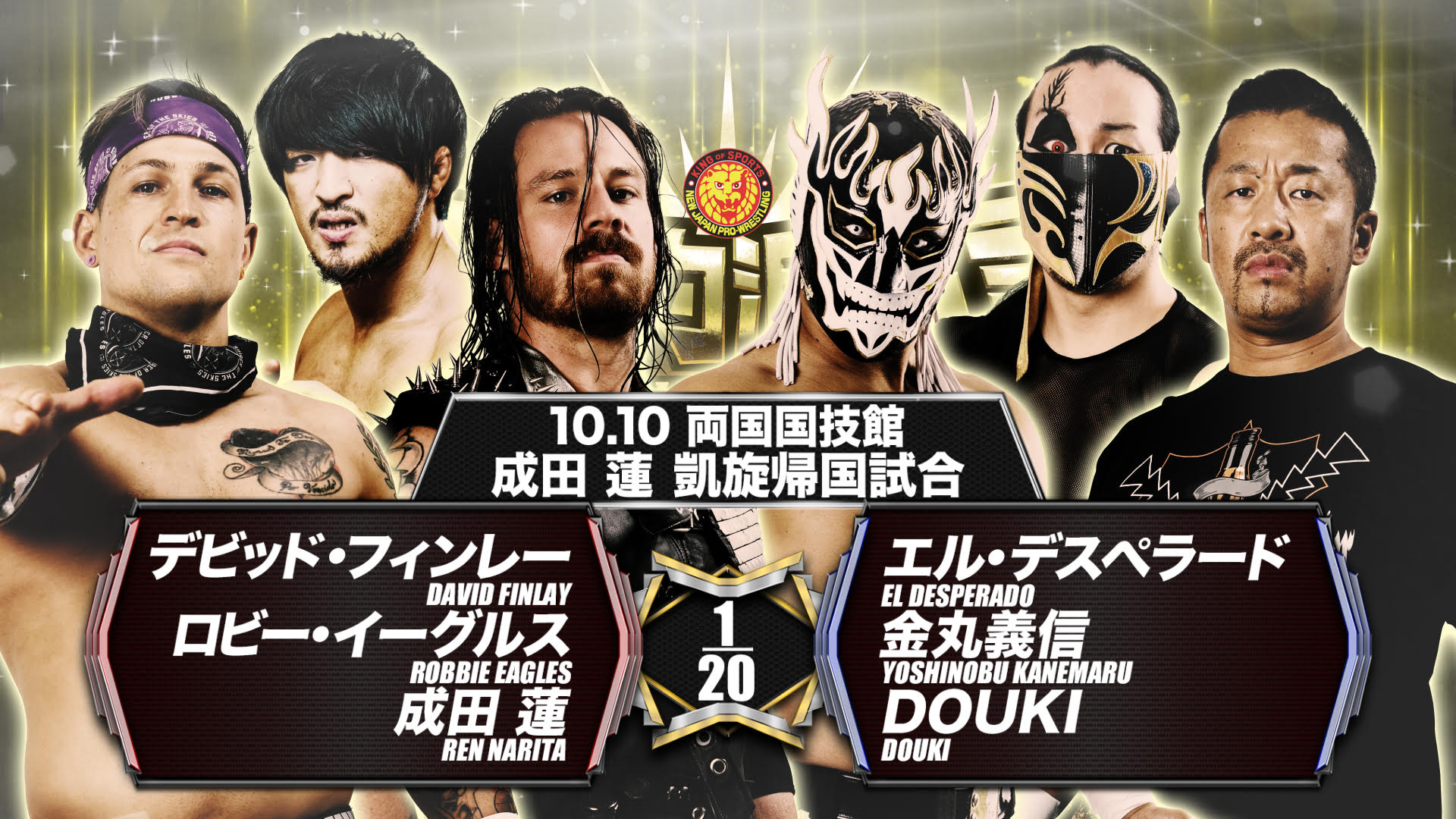 Action in Ryogoku will begin with Ren Narita making his return to consistent Japanese competition after a three year excursion. While fans of NJPW STRONG have seen his growth, now he truly begins his fight on the biggest stage, and does so on the Hontai/CHAOS side opposite a Suzuki-Gun trio.