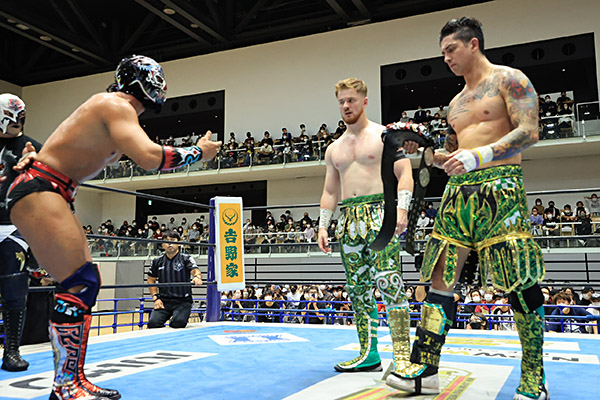 Another championship match has been added to the Battle Autumn tour closer in Osaka on November 5, as Titan and BUSHI will be challenging Francesco Akira and TJP for the IWGP Junior Heavyweight Tag Team Championships.

Titan joined Los Ingobernables De Japon with a surprise appearance at Declaration of Power that led to BUSHI getting a pinfall on Akira. The combination of BUSHI and Titan continued their momentum along with Tetsuya Naito across the first three nights of the Battle Autumn tour, with a pair of wins over Gideon Grey before their new Angel Immortal finisher finally connected on TJP Sunday in Nagaoka to cement this challenge.

Also confirmed to be in action in Osaka will be Tama Tonga, Jay White and Kazuchika Okada. With Okada and White’s IWGP World Heavyweight Championship match confirmed for Wrestle Kingdom, and an intense preview to hit New York City on October 28 as Eddie Kingston and Juice Robinson join the mix, what plays are to be made in Osaka? And with Tama Tonga coming close to the Switchblade in Ryogoku, what’s next for this Guerrilla of Destiny?