The full card has been set for Historic X-Over in Ariake Arena on November 20, as NJPW and STARDOM join one another for a first ever joint event that sees a first ever champion crowned in the headline match.

Either Mayu Iwatani or KAIRI will make history in the main event, as one will be crowned the first ever IWGP Women’s Champion. After a demanding single elimination tournament, Iwatani will represent the ‘domestic’ and, thanks to KAIRI’s huge global footprint, ‘international’ brackets respectively in what is more than a chance meeting in a tournament final.

Two of the ‘three daughters of STARDOM’, Iwatani and KAIRI, along with Io Shirai, helped define the promotion in a challenging period, and brought the group to global prominence in the mid 2010s. Certainly without the efforts of all three, STARDOM would not be where it is in the Ariake Arena on November 20; indeed, executive producer Rossy Ogawa has stated that without ‘The Icon’ Iwatani, there might not be a STARDOM at all.

As Iwatani and KAIRI faced off with the finals of the tournament set late last month, Iwatani would declare that this match will ‘blast away a five year void’ in their relationship, becoming their first singles encounter since 2017. As KAIRI furthered her career and women’s wrestling in general during her time in WWE, Iwatani stayed with STARDOM, and her position as Icon saw her become one of a select few women to compete in both the Tokyo Dome and Madison Square Garden. On November 20 a new chapter is written in a historic rivalry, and entirely new ground is broken in IWGP history.

After Will Ospreay racked up his third defence of the IWGP United States Championship against Tetsuya Naito in a phenomenal encounter at Battle Autumn in Osaka, he wasn’t ready to rest on his laurels heading into Wrestle Kingdom. Already having wrestled arguably the most intense schedule in all of professional wrestling in 2022, Ospreay issued an open challenge for Historic X-Over, one answered by the returning Roughneck, Shota Umino.

Umino embarked on his excursion to the UK in 2019, and almost immediately found himself embroiled in issues with Gideon Grey’s Legion, one which we now know is financially tied to the United Empire. Those ties became all the more obvious when Umino challenged for the Rev Pro British heavyweight Championship last autumn, feeling the full brunt of both the Commonwealth Kingpin and Aussie Open as well. Umino vowed to pursue Ospreay to the ends of the Earth, and took on the US Champion in non title competition at Royal Quest II, again coming up just short in controversial fashion.

As 12-6 elbows reigned down from Ospreay to Umino, referee (and Shota’s father) Red Shoes Unno very quickly called for the bell. Doubtless Umino was in a dangerous situation, but would be able to claim that he was not definitively beaten that night in London, and that he was deserving of another chance, one that presented itself to him November 5. Can Umino make the most of that chance in Ariake on November 20 and become the 17th US Champion?

The mystical demon that is Great Muta will appear in a NJPW ring for the final time in Ariake Arena on November 20, as he teams with Kazuchika Okada and Toru Yano to take on the United Empire’s Jeff Cobb, Aaron Henare and Great-O-Khan. It was during O-Khan’s NJPW World TV Tournament match with Toru Yano that Muta resurfaced for the first time in eight years at a Japanese NJPW event. Back in 2014, it was also alongside Yano, with whom Muta seems to have a strange connection, to take on Suzuki-Gun; now in 2022, it is against another powerful faction on the rise.

Yet Muta has a specific target rather than merely United Empire in general. Wrestling’s ultimate demon wants to tear apart Great-O-Khan specifically. After O-Khan teamed with Muta and NOSAWA Rongai in Pro-Wrestling NOAH in September, a sting in the tail saw Muta spray mist into the eyes of the Dominator after the match. Now with two blinding strikes, O-Khan is determined to get revenge, and United Empire will look to bring about Muta’s retirement a few months early in Ariake.

After Tetsuya Naito came up just short against Will Ospreay in Osaka on November 5, he must now create a new narrative heading into the Tokyo Dome on January 4, one that could revolve around World Tag League. Aussie Open seem near locks to be a part of the annual tag team tournament starting two days after historic X-Over, while the Catch 2/2 will be wearing the IWGP Junior Heavyweight Tag Team Championships into their own Super Junior Tag League the night prior. As KOPW 2022 holder Shingo Takagi also enters the fray, there are a lot of combustible elements in this ten man tag match in Ariake.

Mixed tag rules- a tag on one side necessitates a tag on the other. Women compete with women, men with men

Top of three mixed tags on the Ariake card, the ‘Itsuzai connection’ of Hiroshi Tanahashi and Utami Hayashishita compete against the traditional Japanese stylings and undeniable power of Maika and Hirooki Goto.

Still only 24 and just four years into her wrestling career, Hayashishita’s dominant reign with the World of STARDOM Championship in 2021 earned her the label of ‘itsuzai’, or the ‘master talent,’ one that Hiroshi Tanahashi has carried as ‘master of the century’ for many a year. Opposite Hiroshi and Hayashishita, Goto and Maika make the perfect combination; one that shares both a deep respect for Japanese tradition and heritage that’s seen through their ring gear, entrances and presentation, as well as a straight forward, no nonsense and very hard hitting in ring style. 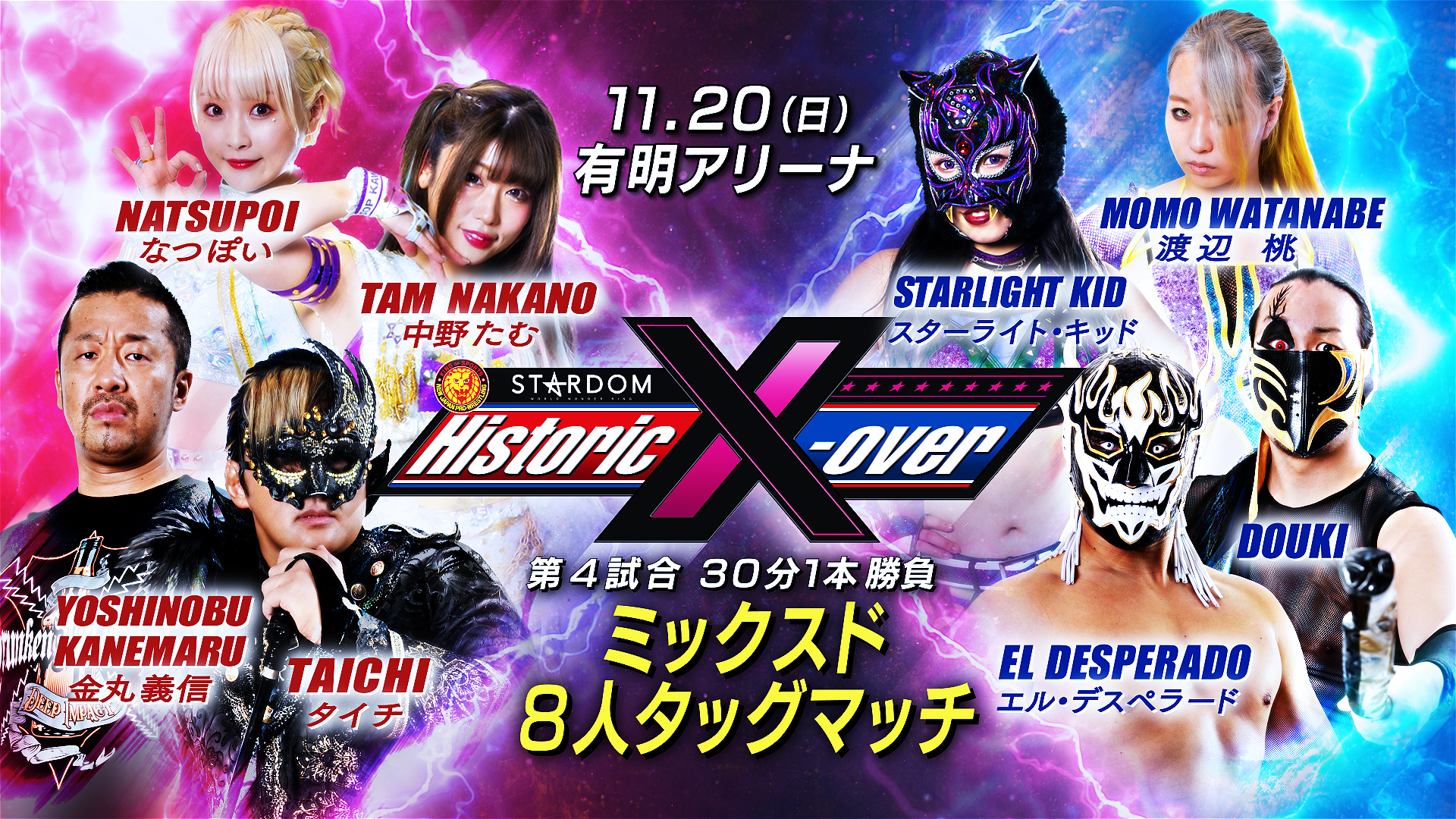 Just as World Tag League and Super Junior Tag League are about to kick off in New Japan, so to is STARDOM in the midst of their own Godesses Tag League at present. Formed earlier this summer through mutual respect after a vicious singles feud, Natsupoi and Tam Nakano’s MelTear tag team quickly seized the Godesses Tag Team Championships. Along with it came acknowledgement from Taichi, who participated in the title presentation to the duo at a STARDOM event earlier in the year.

El Desperado was also present that day, and made his own presentation to the Artist of STARDOM trios champions, two thirds of whom are the Black Desire combination of Momo Watanabe and Starlight Kid. Kid’s dark hearted charisma is one that shares a lot of common threads with El Desperado’s mentality, and made this pairing one fairly obvious to STARDOM and NJPW fans since Historic X-Over was first announced. The question though is just how this affects a bizarre one night only rift within Suzuki-Gun for this eight person tag, one that is guaranteed to have Suzuki-Gun in fighting at some point.

Mixed tag rules- a tag on one side necessitates a tag on the other. Women compete with women, men with men

On a surface level the first of three mixed tag bouts on the Historic X-Over card makes philosophical sense in and of itself. On one side, we have a pair of accredited mixed martial artists who have found success in the pro ranks, in former UFC competitors turned World of STARDOM and former NJPW STRONG Champions Syuri and Tom Lawlor. On the other, we have the British born Italian-Japanese Giulia with Zack Sabre Jr., both being huge international successes in Japan.

Yet while Syuri will celebrate her MMA experience with Lawlor, and while ‘Zack Sabre Giulia’ has an undeniable ring, for Giulia and Syuri this match represents something a good deal more personal. This will be a preview of STARDOM’s Dream Queendom event this December in Ryogoku, where Syuri will put the World of STARDOM Championship on the line against 5 Star Grand Prix winner Giulia. The women are former stablemates, friends and tag partners, but as Syuri won both the 5 Star GP and World of STARDOM gold this time last year, she expressed a desire to break away from Giulia and the Donna Del Mondo group, forming her own God’s Eye stable.

Feeling betrayed ever since, Giulia was determined to take the red and gold from Syuri, but fell short in March at Sumo Hall. Driven through an emotionally demanding 5 Star this year by the promise of taking the belt from her one time friend, Giulia will wear her heart on her sleeve in a tag bout that is more than a mere exhibition.

Six woman tag team action will see Donna Del Mondo and Queen’s Quest continue an ongoing rivalry in Ariake. One of the more intriguing tales during the Goddesses of STARDOM tag league has been the ‘My Fair Lady’ pairing of Mai Sakurai and Lady C, the two not exactly making the best of a cross stable tag team situation, and being at constant loggerheads. That will likely see some exciting sequences in this bout, while Himeka and Thekla will be targeting one or both of High Speed Champion AZM and the Wonder of STARDOM title holder Saya Kamitani as Dream Queendom approaches.

The main card on Novemebr 20 will start with Lio Rush teaming with CHAOS for the first time to take on HOUSE OF TORTURE. After Yujiro Takahashi and SHO looked to play typical H.O.T tactics in new York last week at Rumble on 44th Street, Lio Rush came to YOH’s aid, and made a pact to team with Direct Drive for Super Jr. Tag League. This will see a precursor of the action to come, and a long awaited Japanese New Japan debut for the Man of the Hour.

The second kickoff match at Historic X-Over will see the ever unpredictable STARDOM Ranbo. 15 wrestlers will participate in the timed battle royal with new entrants coming in every minute, and elimination via pinfall, submission or over the top rope. Who appears, and who comes out with the win?

The first kickoff match of the evening will see the NJPW debut for Oskar Leube. 201cm and 110 kg Leube hails from Hamburg in Germany, and joined the Fale Dojo in 2019 before the COVID pandemic saw him return to Germany to continue his training. Rejoining the New Japan fold, he entered the Noge Dojo in May, and has been working diligently to this debut match. Yet the LA Dojo quartet opposite him tonight know the benefits of hard work themselves, and Katsuyori Shibata’s fight team will be doling out some stiff lessons to kick off the evening.