Korakuen Hall saw the kickoff of Super Junior Tag League on November 21, as a vocal crowd watched the first five league matches, and given plenty of action to cheer.

The main event of the evening put YOH and Lio Rush opposite IWGP Junior Heavyweight Tag Team Champions Catch 2/2. Despite the swagger of TJP and the trash talk of Francesco Akira, the Korakuen crowd were behind the champions, as YOH and the Public Enemy traded holds, and Akira and Rush brought the pace. 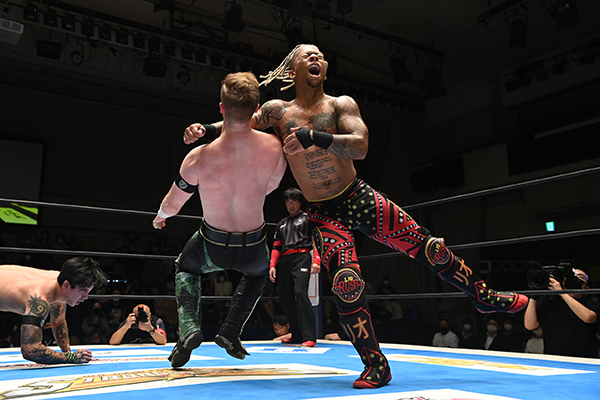 It would be TJP breaking the deadlock, baiting YOH into the ropes and then outside the ring, where Akira followed up with a plancha. That put YOH on the back foot, where he stayed for a long period of United Empire control until a neckbreaker brought Rush back in. A ball of energy, Rush still flew with grace and precision, and had the crowd, once for Catch2/2, chanting ‘Leo’ as a pair of lopes suicida connected to both champions. 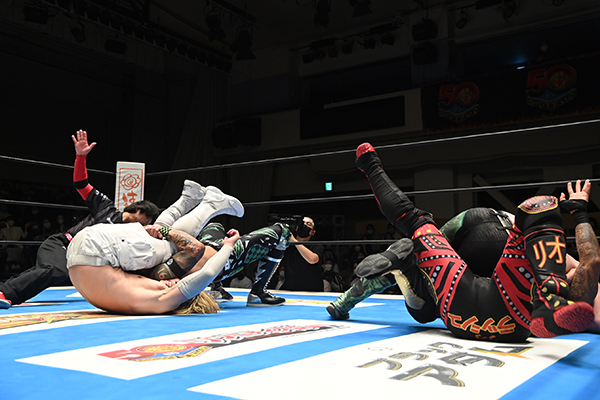 With YOH back inside, the three time Super Junior Tag League winner spiked Akira with a wheelbarrow German and then a perfectly timed thrust kick. His momentum would be curtailed though, as TJP thought fast for a blind tag, leading to the 2×2 and then a Mamba Splash onto YOH for a near two. 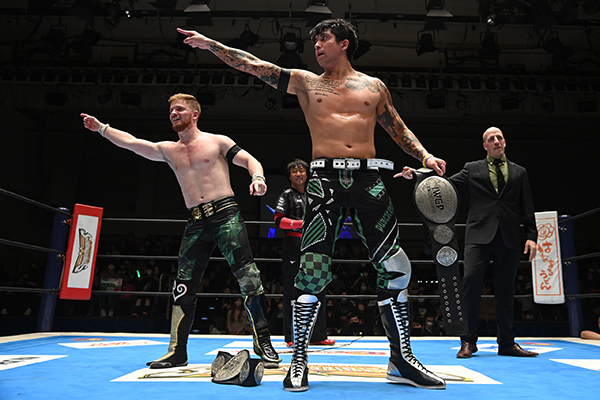 As the champions set for the Leaning Tower, a save from Rush almost led to a victory roll win for CHAOS. After a TJP kick out, Rush Hour and then the DNV drew another near fall on the Public Enemy, CHAOS set for 3K, but Akira re-entered the ring for a perfectly timed save, leading to a jackknife pin, Akira and TJP still undefeated in direct tag competition. 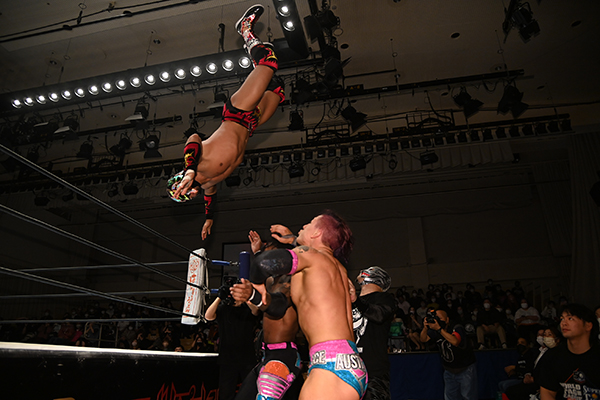 Another clash of two pre tournament favourite teams, Titan and BUSHI of Los Ingobernables De Japon faced IMPACT and BULLET CLUB’s Ace Austin and Chris Bey. Yet while Titan and BUSHI have been widely picked to win Super Junior Tag League, El Inmortal found himself punished for the bulk of the match as he laboured to escape the BULLET CLUB corner. 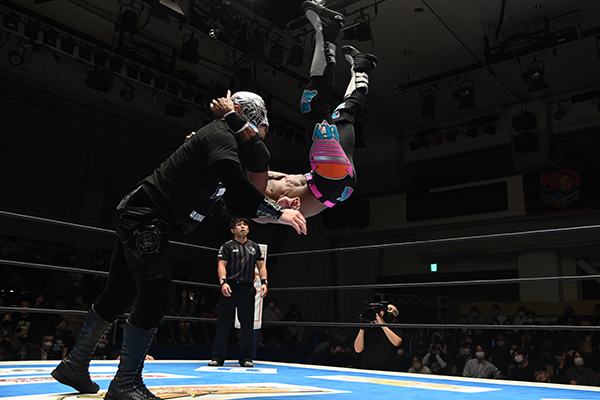 After Titan escaped a double team suplex though, he was able to elevate Bey over the top rope and create a tag to BUSHI. A string of BUSHI offence slowed the BULLET CLUB side and a stunning tope con giro saw the LIJ side take fuller control of Bey, but the Ultimate Finesser had an innovative escape for Angel Inmortal. As Bey landed a spectacular toBey con giro to Titan, Austin struck BUSHI with the Fold and served up his partner for the Art of the Finesse. 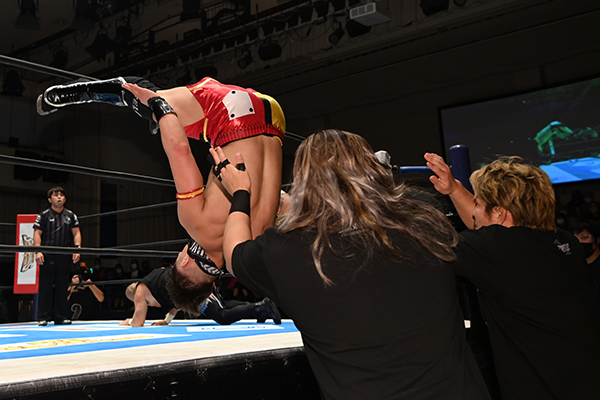 SHO and Dick Togo presented the darkest corners of BULLET CLUB as they represented HOUSE OF TORTURE against Robbie Eagles and Tiger Mask. Togo showed his expert ring awareness and slick counter attacking ability in flashes during the bout, but he was more keen to cut corners, and as the match entered its final phase, cut corners almost cut Flying Tiger off at the knees. 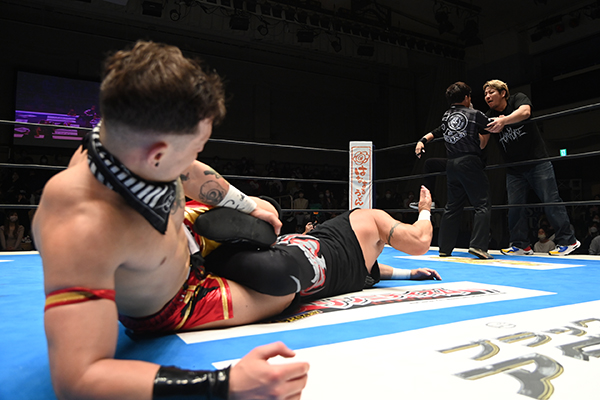 As Robbie Eagles applied the Ron Miller Special, EVIL and Yujiro Takahashi hit the ring to prevent the visible tap out. Though Eagles prevented SHO from using his wrench, Togo was able to hit a Pedigree and prepare for the Senton. Tiger Mask made the save however and hit a tope suicida to the invading SHO. As Robbie flew to EVIL and Yujiro, he quickly followed with the Ron Miller again to pick up the win.

Yoshinobu Kanemaru and DOUKI have a Dick Togo like knowledge of the dirtiest tricks in the book. They showed the benefit of that knowledge in controlling Ryusuke Taguchi for a large part of their bout with the Wild Hips combo of Taguchi and Clark Connors. DOUKI and Kanemaru combined for a British Fall and a double stomp on Connors, but the Wild Hips fired back, and a double Bummer Ye set up for the Trophy Kill and a Connors win. 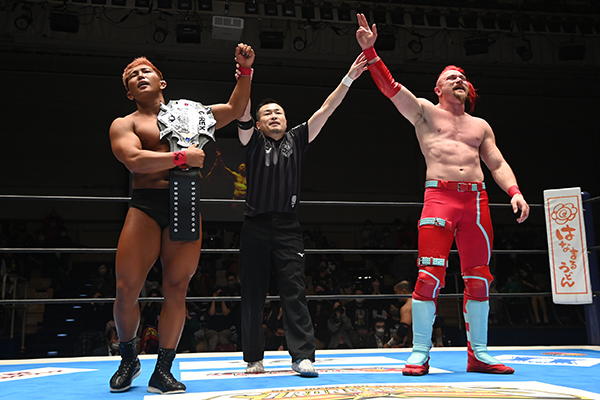 The first match of the league saw Kevin Knight and KUSHIDA face El Lindaman and Alex Zayne; red hair on the G-Rex Champion and wrist tape logos signifying Zayne’s entry to #STRONGHEARTS. In the big spot of his first direct tag match in Japan, Knight made a big impression with a huge assisted dropkick to Zayne, but despite the best efforts of KUSHIDA, the Jet would be left legal for a Kumagoroshi from Lindaman that set the table for the Cinnamon Twist and two points on the board.