First KOPW2022 defence outside of NJPW set for PPV event 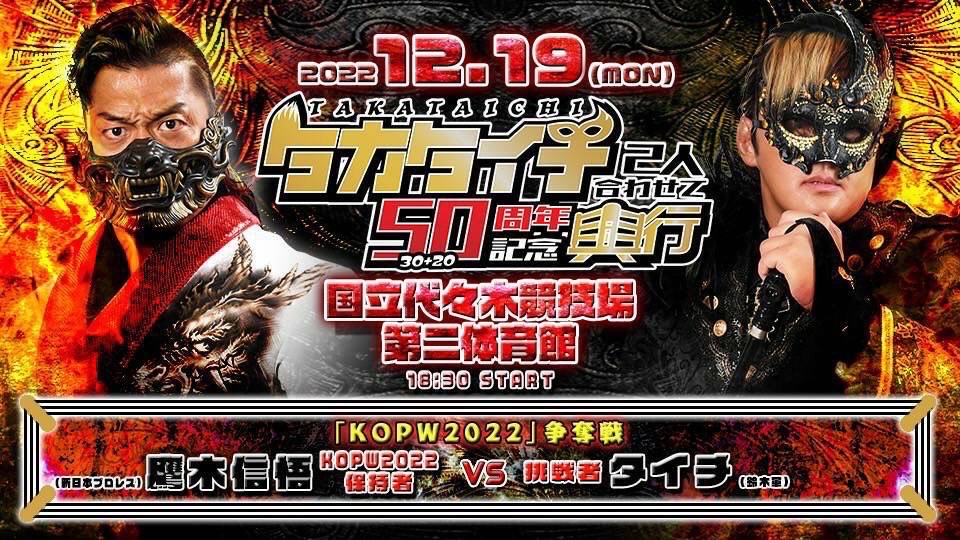 As 2022 comes to a close, so too is KOPW 2022. Every year, the KOPW trophy is defended through the 12 months, until resetting for the following year, meaning that Shingo Takagi is just five short weeks from being the KOPW 2022 champion.

Yet he has one more defence inbound, and Taichi has been eager to issue the challenge. After incredible 30 count and ten minute scramble matches between the two saw the perception of KOPW shift and attention gather in spades, Taichi wants one more shot at the Dragon. Yet Takagi was reluctant to offer the shot without an appropriate venue, and with December 14 in Sendai seeing either the World or Super Junior Tag League finals in the main event, Shingo suggested there was no grand enough stage.

Taichi replied that if there wasn’t an available date in NJPW, there might be one for his own promoted event. On December 19, TAKA Michinoku and Taichi mark a combined 50 years in pro-wrestling with cheering fans in Yoyogi, and after an intense war last night in Korakuen saw them both go to a countout in six man action, Takagi gave his go ahead to settle this score once and for all, making for the first ever KOPW defence not to take place in an NJPW ring.

What stipulations might emerge, and what will happen December 19 on PPV?