World Tag League 2022 got underway on November 22, the cheering crowds in Korakuen able to partake in a long awaited sign off for the victorious Tetsuya Naito and SANADA after the main event.

They had to work to victory over Great-O-Khan and Aaron Henare to do so, work started by Naito as he got in the head of O-Khan. After antics over O-Khan’s recently published book, Naito was able to force a tag to Henare, and he and SANADA took over on the Ultimate Weapon, until characteristic hard strikes turned the tide.

Naito would be in the wrong part of town until a single legged dropkick saw SANADA re-enter the fray. A rare Giant Swing struck O-Khan, and the subsequent disorientation for Cold Skull led to an inadvertent low blow on his stunned opponent, and though he and Henare were swift to regain control, much needed recovery time put Henare in charge on the United Empire side. 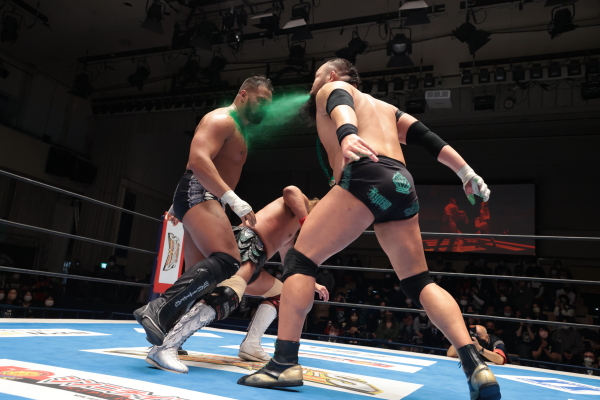 Henare was effective in the spot as he brought brutal boots and the Berserker Bomb for two. O-Khan re-entered to try for the Imperial Drop but a trip from SANADA took the Dominator out. Henare dropped Naito with the Rampage Tackle, and followed with the Ultima before O-Khan came in with evil designs on El Ingobernable.

O-Khan still with memories of Great Muta and Historic X-Over, wanted to spray green mist in Naito’s eyes, but only hit Aaron Henare. An assisted tornado DDT and a Destino later, and Naito was victorious, issuing that long coming roll call to celebrate. 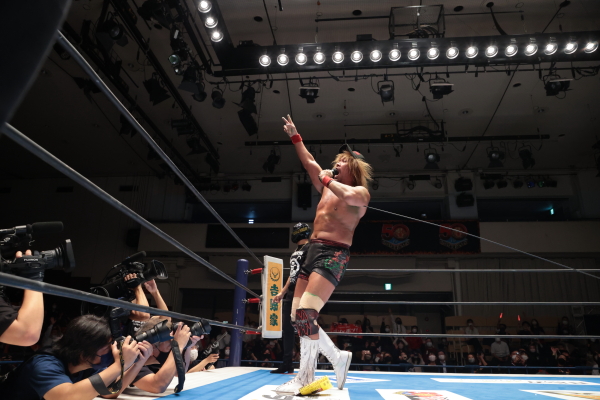 The night wasn’t entirely to United Empire’s deficit however, as Aussie Open picked up their first two points over Be-Bop Tag League. Extremely comfortable in the tag league environment, they would isolate Toru Yano for the bulk of the match. Though Hiroshi Tanahashi would hit the ring, Slingblade opening the door for some exposed ring buckle assisted offense from Yano, the master producer was left legal to taste the Dental Plan and then Corealis. 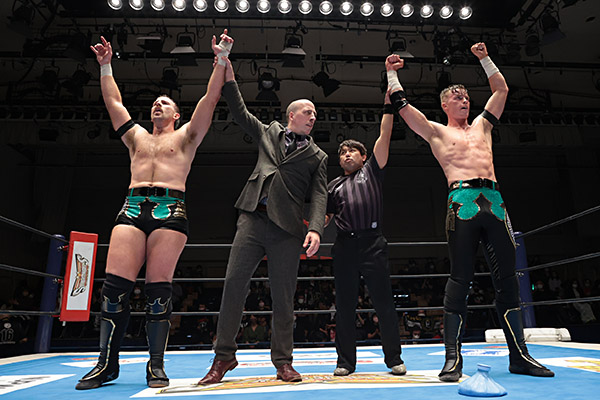 2021 World Tag League winners Bishamon adopted new tag team music and gear for the tournament, but it was all of CHAOS that was on the same page as YOSHI-HASHI and Hirooki Goto fended off EVIL and Yujiro Takahashi. As ever, Dick Togo was ringside with his charges, and was quickly involved.

When Bishamon tried for Violent Flash on Yujiro, EVIL cut off the move with a low blow, and the referee was knocked down soon after. That brought Togo and the ‘spoiler’s choker’ in the ring, but YOH would stunningly appear to cut Togo off. SHO made his own runin to give HOUSE OF TORTURE another advantage, but Lio Rush came to CHAOS’ aid, landing the 3K to ensure nothing got in the way of Shoto and a Bishamon victory.

It was a bad night not just for HOUSE OF TORTURE, but all of BULLET CLUB, as Chase Owens and Bad Luck Fale fell to Suzuki-Gun’s Lance Archer and Minoru Suzuki. The ring shook on multiple occasions when super heavyweights Fale and Archer collided; meanwhile Owens continued to labour under the misconception that he is wrestling’s greatest shooter as he took the fight to Suzuki- or at least tried to. One thing Chase did bring was sharp knees to Archer that nearly saw him to victory, but when Suzuki provided a rear naked choke assist, Archer’s Blackout sealed the deal. 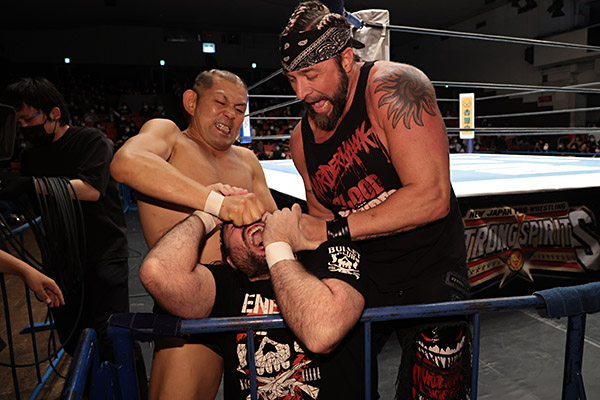 World Tag League got underway with Alex Coughlin and Gabriel Kidd facing TMDK’s Mikey Nicholls and Shane Haste. As TMDK, reunited for the first time since the early summer, showed zero sign of ring rust, they nonetheless had issue with Kidd’s stinging chops and Coughlin’s superhuman power. For Coughlin, maybe too much power surges through his circuits though; when he attempted to powerbomb Kidd onto Haste he only found the mat instead, and soon after the Tankbuster and then Thunder Valley scored for three. 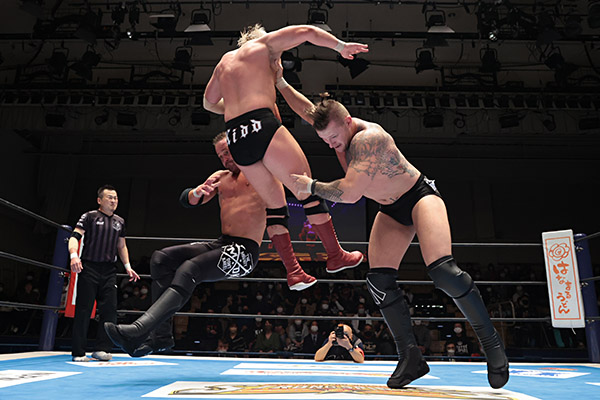