Super Junior tag League arrived in Nagano on November 28, the fifth night of the league seeing the tournament pass the midway point, with pressure on teams still behind to get on the board or face elimination. 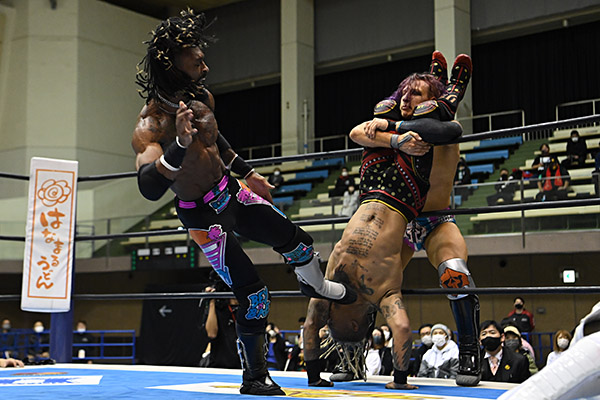 The main event would see the undefeated side of Ace Austin and Chris Bey looking to stay clear at the top in the face of CHAOS’ YOH and Lio Rush. Fighting to stop the BULLET CLUB hot streak and with a good deal to prove, Lio Rush would defuse Bey and Austin’s slick teamwork early to score with a lope suicida, but it would be Bey who put a stop to Rush’s forward momentum and brought him authoritatively in the wrong corner.

Cornered against two larger opponents, Rush was still able to hang on and get two for one on an enzuigiri to get YOH back in the ring, but he too would be under the collective BULLET CLUB thumb soon enough. A Falcon Arrow set up Rush for an explosive entry, but again double team momentum was denied, and Bey and Austin continued the CHAOS dissection. 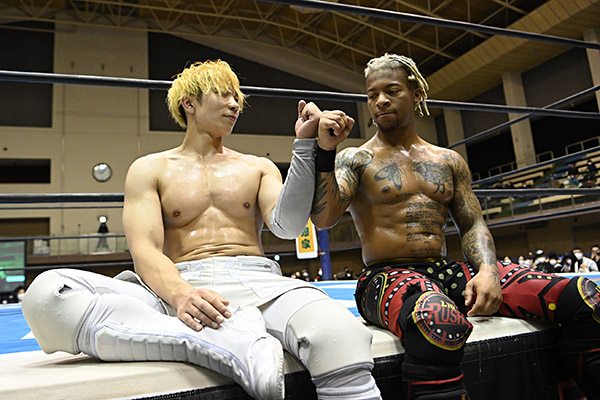 Rush would turn the match on a dime when he used Bey to catapult himself into a Stunner on Austin. After Rush Hour scored, YOH would use DNV and then Rush hopped up for Final Hour, putting the first blemish on the IMPACT side and creating a logjam at eight points. Rush declared after the match that he and YOH will continue to learn together as they take the top spot, and with YOH receiving the crowd’s affirmation with a fan poll, the CHAOS side made their victorious exit. 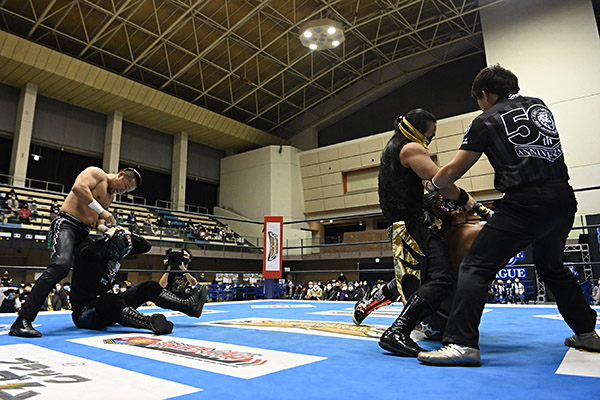 DOUKI and Yoshinobu Kanemaru were, along with HOUSE OF TORTURE, in the danger zone when it came to elimination in Nagano, and desperation clearly showed as they took legally questionable control of Titan in the early stages after a clean start. DOUKI attempted to remove Titan’s mask, and along with Kanemaru, piled on insult and injury until a well placed enzuigiri brought BUSHI inside. After a double tijeras, BUSHI would set for a tope suicida, but DOUKI would catch the masked man from behind, again putting LIJ on the back foot. 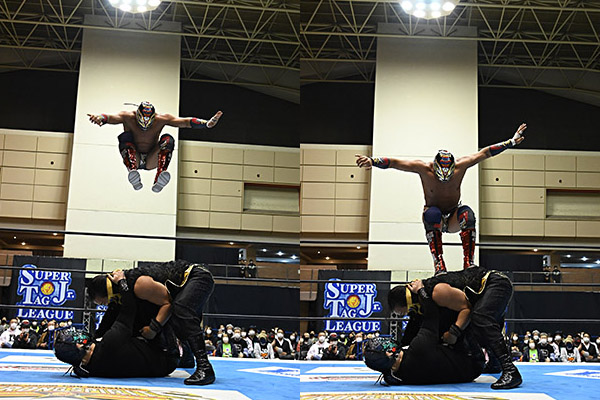 Titan’s furious feet would make the difference for his team, and a tope suicida landed with aplomb on DOUKI. Kanemaru was in just the right space to support his partner, and created an opportunity with a satellite DDT for the Italian Stretch #32; after a referee assisted break from BUSHI, Daybreak would score for DOUKI but BUSHI again prevented Suplex De la Luna, and after a tope suidida for Kanemaru, set up Angel Inmortal for the win. 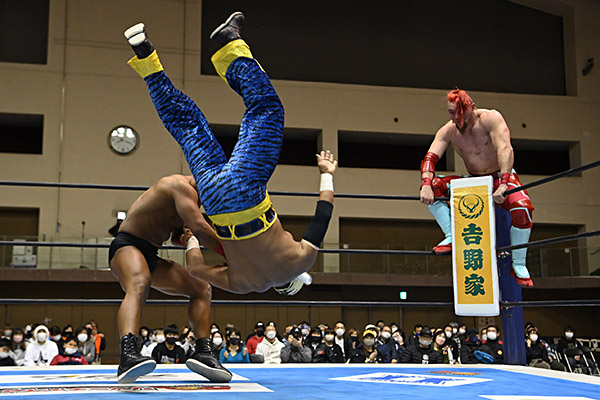 Tiger Mask and Robbie Eagles sought their third win against the SAUCEHEARTS combination of Alex Zayne and El Lindaman. Lindaman was upset at losing a tanning contest with Tiger Mask, allowing Flying Tigers to take an early advantage, but once tagged in, Zayne scored big with the Baja Blast for two on Eagles. The Australian would escape the Taco Driver to hit the pulse Drop and bring in Tiger Mask, who took advantage of an errant Zayne kick on Lindaman to land a Tiger Driver for two. Tiger primed for a top rope Butterfly, but Lindaman went on a hot streak of suplexes, who hit the Kumagoroshi on Tiger Mask and served the veteran up for the Cinammon Twist. 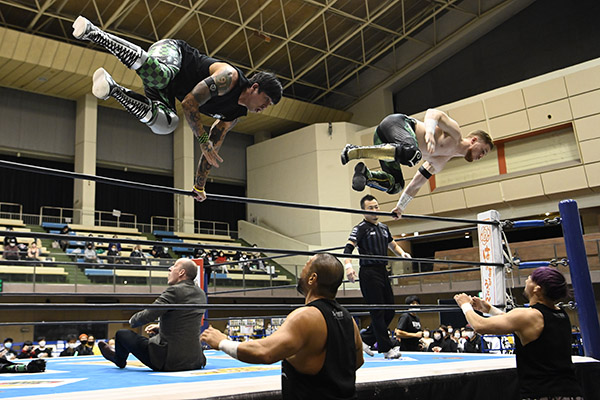 The still winless HOUSE OF TORTURE side of Dick Togo and SHO were in need of a victory or face practical elimination at the hands of Catch 2/2. A quick start from H.O.T defused, Togo would instead get the upper hand with an attack from the apron on TJP before keeping the Public Enemy in place on the mat. After a swinging DDT, Akira would come inside with a ton of pent up aggression, but fingers to the eyes threatened to put Akira’s fire out on multiple occasions. A blind tag and TJP almost put Togo away with a Mamba Splash, but it would be Togo with an admiral counter.

As the match escalated EVIL and Yujiro would make their customary appearance only to be taken out by Aussie Open,  and though SHO defused a Leaning Tower attempt on Togo, Akira would disarm the Murder Machine of his wrench. The 2×2 knees ringing off Togo’s head, Catch 2/2 picked up their fourth win, and put HOUSE OF TORTURE effectively out of the running.

First to do battle on the night were KUSHIDA and Kevin Knight opposite Wild Hips in a fight to reach four points. KUSHIDA had gifted Knight a new look in preparation for their match, and the Jet took to Taguchi with a rejuvenated attitude before he and KUSHIDA set to work on Clark Connors’ arm. An almighty Jeep Flip would clear a tag to Taguchi, and the pair would separate KUSHIDA until a drop toe hold sent Connors into a sensitive area for Taguchi. The Time To Fly elevated dropkick scored for Knight, but after Connors used his partner as a weapon, the double Bummer Yes connected. Connors went up for a superfly, and as Knight jumped to meet his opponent, was caught with a spear in midair and then the Trophy Kill.