Aussie Open alone at the top after Shizuoka

Cheering crowds in Shizuoka welcomed the fourth night of World Tag League action on November 30, with teams looking for control heading into the halfway point of the tournament and the new month. 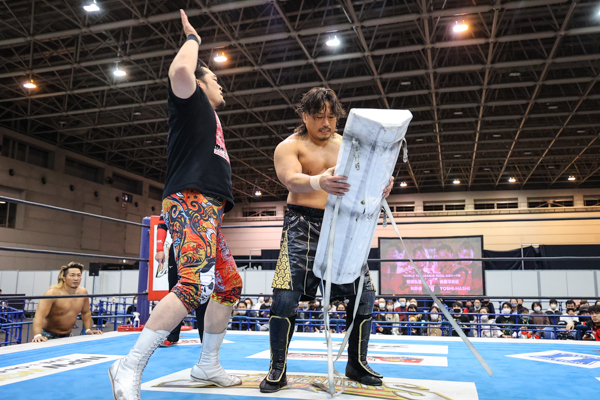 The main event would see Bishamon face Be-Bop Tag League. Toru Yano would show no compassion to his CHAOS teammates in Hirooki Goto and YOSHI-HASHI, as both tasted the exposed turnbuckle in the early going, while Tanahashi took advantage on the floor. A misdirection lariat would lead to a much needed tag to YOSHI-HASHI, and the Headhunter would trade heavy elbow shots with the Ace before being taken down to the mat with a Dragon Screw. 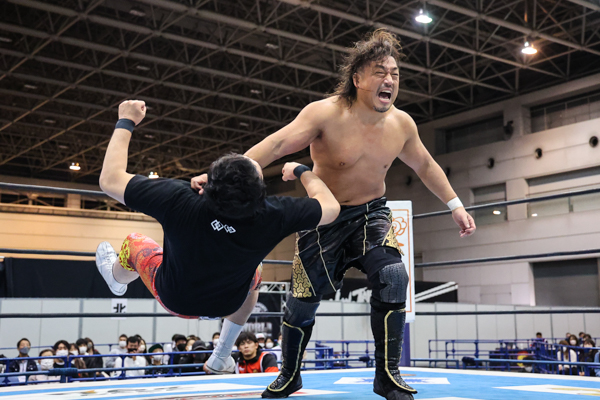 A recovered Goto would take to Toru and Hiroshi, and fought off the effects of a slingshot into the exposed corner to hit a double lariat. As the match reached the ten minute mark, YOSHI-HASHI tried for the Kumagoroshoi on Tanahashi, countered with a Twist and Shout; as Goto broke up the pin and Yano chased off Goto, the Ace went for High Fly Flow but only found YOSHI-HASHI’s knees. 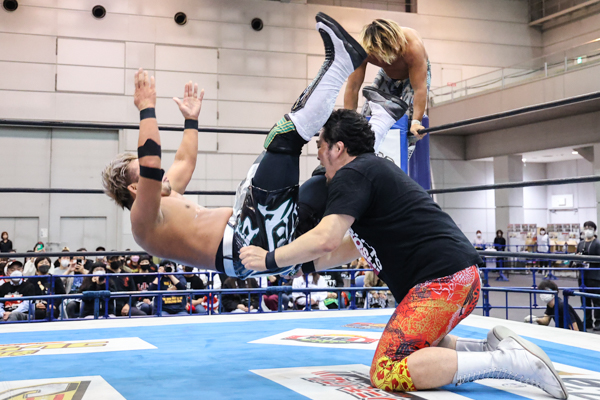 A left hand swat from Tanahashi slowed the Headhunter’s momentum, but didn’t stop Goto re-entering for the Violent Flash. Hiroshi would fight off Shoto though, and landed a Slingblade to YOSHI-HASHI; still he couldn’t get the decisive HFF as Goto stopped Tanahashi’s ascent. As YOSHI-HASHI fought to suplex Tanahashi off the top rope, Yano came in and delivered an Onigoroshi powerbomb before the High Fly Flow landed on the third attempt for the Be-Bop Victory. 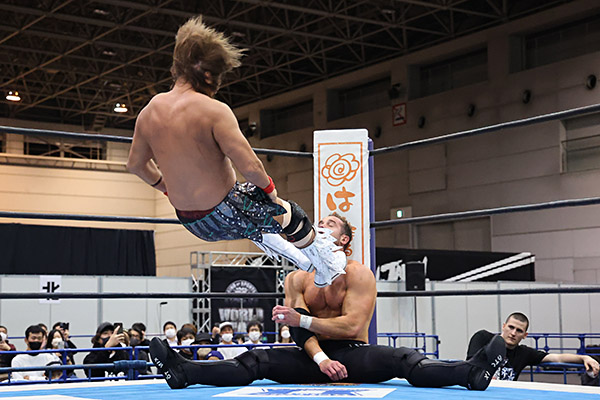 Both the LIJ side of Tetsuya Naito and SANADA, and the Mikey Nicholls and Shane Haste TMDK combination came into their Shizuoka match on four points and a 2-1 record. As Haste and Nicholls sought to show their tag team cohesiveness, they controlled Naito early after Nicholls planted El Ingobernable with a stalling suplex, but a trip from SANADA saw LIJ take advantage on the floor. Back inside, ‘Mad’ Mikey would be in the wrong part of town until a mighty lariat out of the corner led to a tag to Haste. 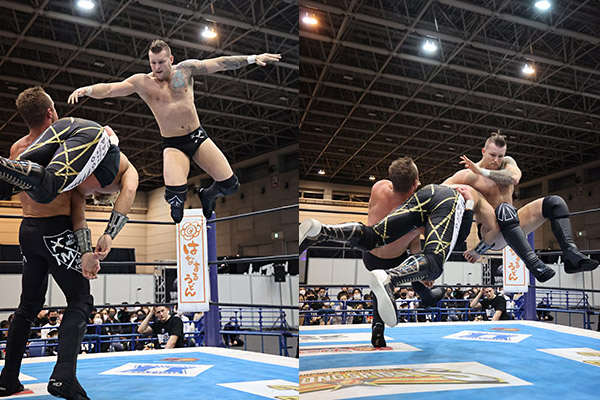 Impactful double teams would put Naito in a bad way until a swinging DDT brought SANADA in; a TKO landed on Nicholls and SANADA went for a Moonsault Press, but only found canvas as Haste hit the ring and the match broke down. Naito would be taken down, and then SANADA fell victim to the Tankbuster for the victory. 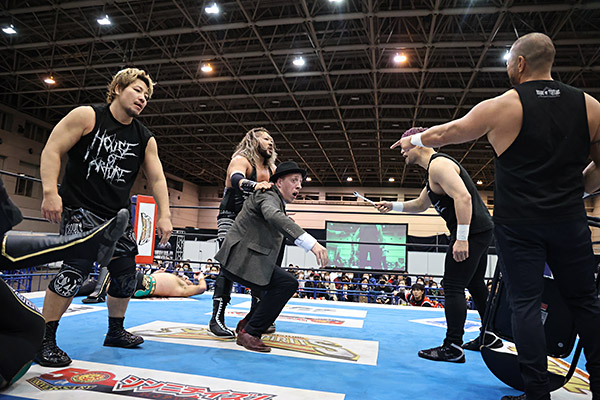 The increasingly desperate HOUSE OF TORTURE would show their hand right at the bell with Aussie Open, as they attacked Kyle Fletcher and Mark Davis at the bell, only to find their dirty tactics quickly defused. It would be in the ring that EVIL and Yujiro Takahashi had better luck, Fletcher controlled by Yujiro as EVIL sent Davis out over the timekeeper’s table. When Fletcher got low on an EVIL suplex though, Dunkzilla Davis came in, and the King of Darkness felt the brunt of Australian power- until being shot into an exposed turnbuckle. 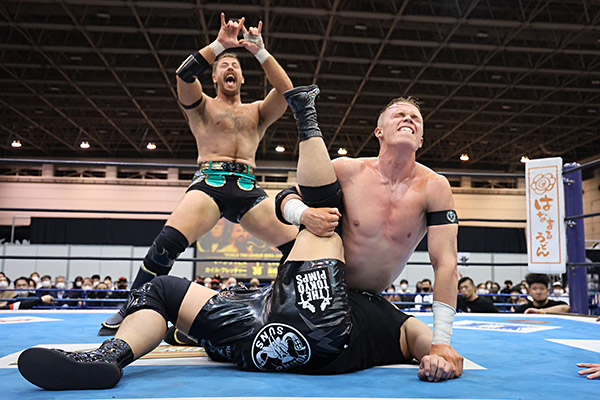 Fletcher and Davis wouldn’t be denied, as the Aussie Open provided the perfect support to Davis’ brute strength. Yujiro was victim to the Dental Plan, predictably bringing SHO to ringside as the referee was laid out, but Great-O-Khan would come to the aid of his United Empire teammates, and after a low blow from Gideon Grey, the Corealis struck Yujiro for the win. 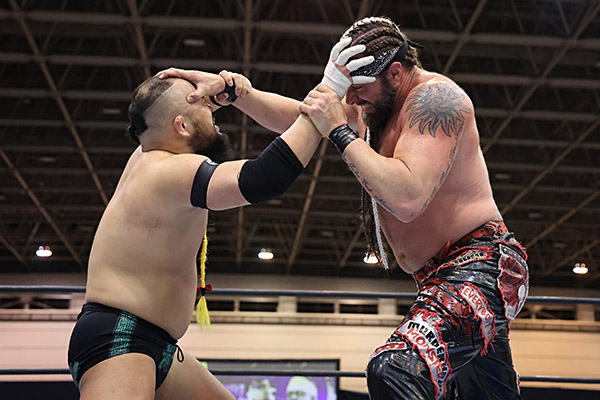 Great-O-Khan and Aaron Henare shared a four point position with Minoru Suzuki and Lance Archer heading into Shizuoka, and with a desire to set themselves apart, both teams started brawling at the bell with O-Khan emerging in control of Suzuki. The King would battle back as he targeted the arm of Henare before controlling the Ultimate Weapon; a heel kick would eventually bring O-Khan in but with heavy damage incurred. When Archer and O-Khan locked horns, a battle of the Iron Claws ensued before O-Khan went effectively down to the Achilles, and Archer would be struggling as he almost fell prey to the Imperial Drop, but after a Suzuki interruption and rising Archer knee, Blackout connected for Archer and two points. 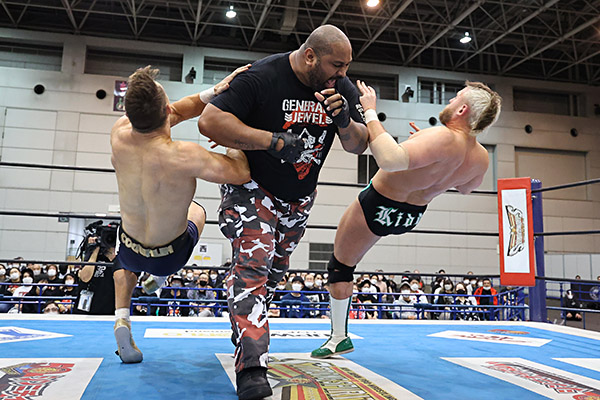 First to battle for points were Alex Coughlin and Gabriel Kidd opposite Bad Luck Fale and Chase Owens. Shizuoka was firmly behind Kidd, who took to Owens on the mat before allowing his robotic partner into the ring to hurl Chase for impressive suplexes. Fale would show the Briton the difference of size, and kept Kidd in the BULLET CLUB corner until a big Tenzan style brainbuster on Owens. Coughlin too would struggle against Fale and Owens, and was left alone as Kidd took a Grenade launcher, but a massive bodyslam scored to Fale. Sensing danger, the veteran Owens would quickly shut down the Android, quickly hitting a C-Trigger and then the Package Piledriver to end the match.