Kakogawa in Hyogo prefecture saw the sixth night of World Tag League action on December 3, with four league matches seeing the teams prepare for the final third of league competition. 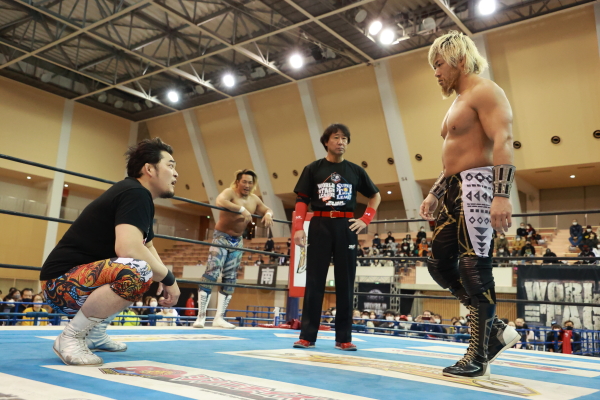 The main event of the evening would see Tetsuya Naito and SANADA take on the Be-Bop Tag Team of Hiroshi Tanahashi and Toru Yano. After considerable standing on ceremony, old enemies Tanahashi and Naito would finally lock up and then share a mutual hair pull, before tags both sides. While Yano’s attempt at a Paradise Lock did not work out, he was as slick as ever at removing the corner pad, and after countering a rolling cradle seemed to be in charge only for SANADA to put both Toru and Hiroshi in tandem Paradise Locks. 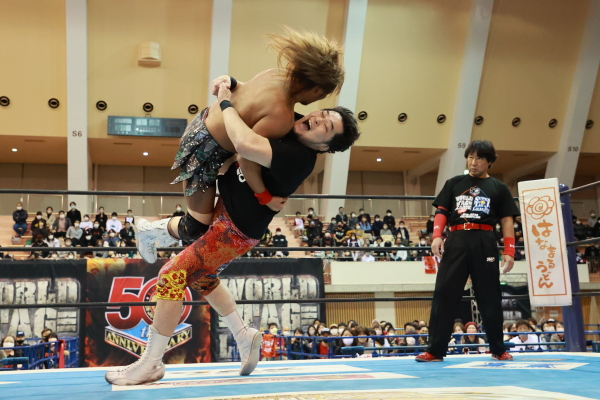 A hair pull would end a period of sustained control for LIJ and bring in Tanahashi with a series of takedowns, paused with a low then high dropkick from SANADA. When Cold Skull was tempted to dive to the floor though, the Ace would punish SANADA, with a series of Dragon Screws in the ropes, followed by the Texas Cloverleaf. As Naito broke Tanahashi’s focus, SANADA would hit a Dragon Screw of his own to tag out. 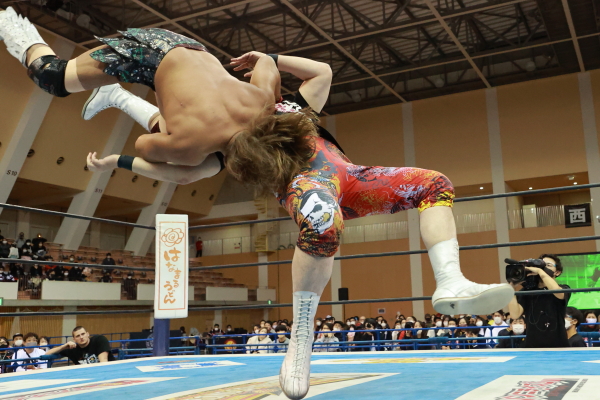 Naito’s momentum back inside would be stopped with a Tanahashi Slingblade, and a string of offence from Yano, who hit a suplex and then a shot into exposed steel before a rollup for two. With perfect non verbal communication, SANADA would come in to assist Naito, but Tanahashi was there for Yano in kind, a left hand swat leading to a chopblock and another Yano nearfall. Toru would try for the Demon Killer powerbomb, but was stopped by the LIJ duo, Naito able to ring up the arm on Yano for Destino and the three. 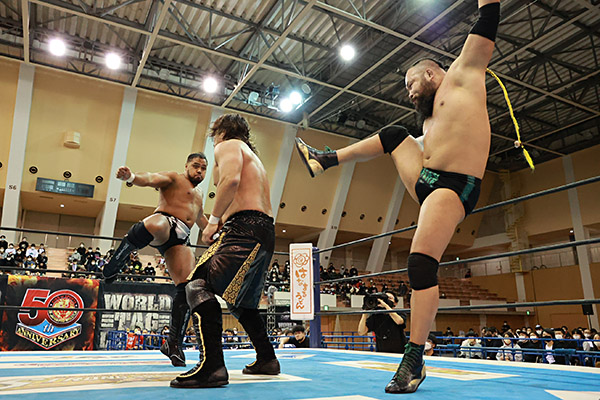 Furious at a fast, flash pinfall loss in Osaka Friday night, Suzuki-Gun were more than happy to meet EVIL and Yujiro Takahashi out on the floor for a lawless start to the semi main event of the evening. It would be HOUSE OF TORTURE in control back inside though, as Minoru Suzuki was kept under the thumb, boot and choking hands of his opposition. When H.O.T poked the bear a little too hard though, a big shot from the King brought in the Murderhawk Monster Archer, who used Dick Togo as a weapon on EVIL and Yujiro. 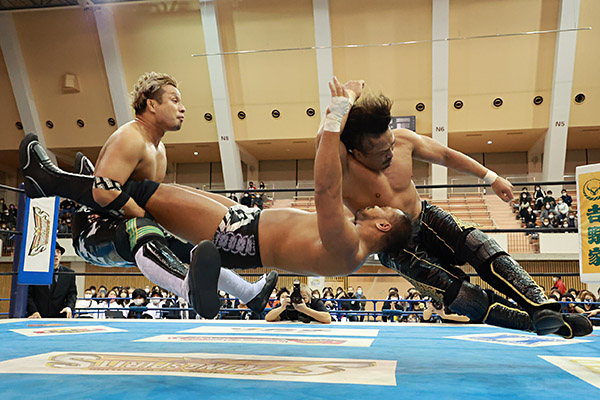 After being bounced from pillar to post, EVIL would eventually low bridge Archer to get Yujiro back in the ring, Takahashi ensuring the referee was laid out for a H.O.T mugging. Archer would take care of the interference and set Suzuki for the rear naked choke however; the Gotch Style Piledriver struck, but SHO made his entrance and pulled out the referee. With the full HOUSE OF TORTURE complement doing their dirty work, EVIL struck Suzuki and Yujiro was put on top for the pin. 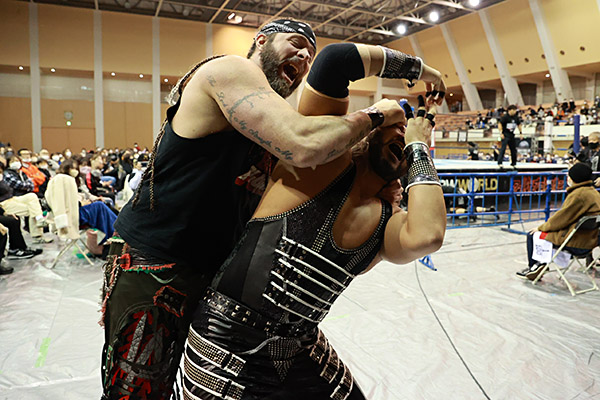 Bishamon took on Great-O-Khan and Aaron Henare with both teams having suffered two losses and ill affording a third. With the Kakogawa crowd behind the Dominator O-Khan started strong but was taken down by the CHAOS duo, Hirooki Goto and YOSHI-HASHI pounding the war drums on O-Khan’s back. With Henare’s help though, O-Khan would take control of Goto, painful and humiliating offense would punish the fierce warrior until a powerful lariat out the corner led to the tag. 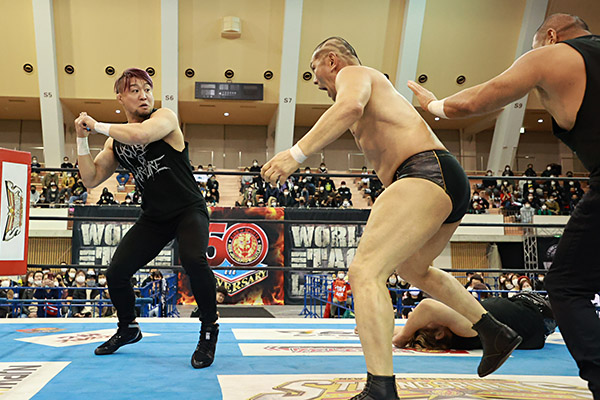 YOSHI-HASHI hit the ring with a Headhunter and vicious drop kick to a seated O-Khan, but a snap suplex set up Henare for a tag and elbow that rocked the CHAOS member. As the match hit the ten minute mark, O-Khan and Henare looked first for dual submissions and then a stereo Streets of Rage/Eliminator, but Bishamon escaped the predicament. Shoto looked to follow on Henare, but O-Khan made the save; the United Empire dropped YOSHI-HASHI and then Henare struck Goto with the Rampage Tackle but YOSHI-HASHI prevented the Imperial Drop and then followed with Violent Flash into Shoto. 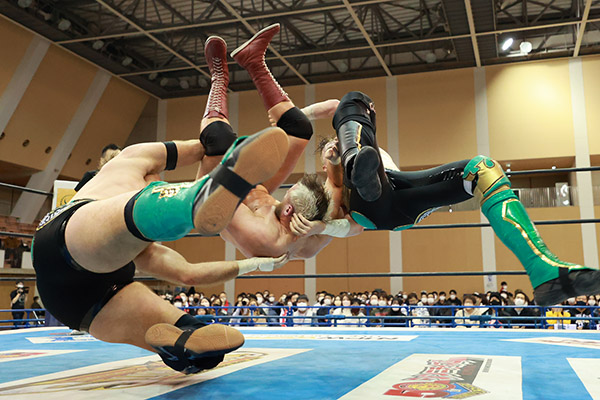 First was top of the table Aussie Open against league backmarkers Gabriel Kidd and Alex Coughlin. After being agitated on his manufacturing day by Gideon Grey before the bell, the Android Coughlin stormed into Kyle Fletcher ancd mark Davis, as Kidd joined the action with a quebrada to the floor. Moments later though the league leaders took control, slamming their opponents back to back, then on the apron and the ringside mats. With Kidd’s strikes and Coughlin’s suplexes, the LA side fought back; though Aussie Open blasted Kidd with the Dental Plan on the floor, Coughlin brute forced himself out of Corealis inside, but sandwich lariats and the Corealis scored on Kidd to put the Australians on 12 points.