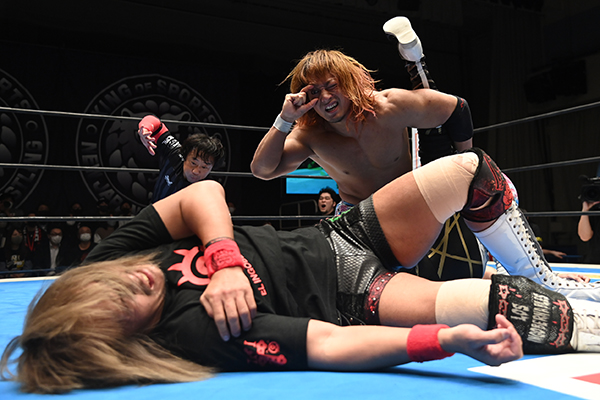 The main event of night one from Korakuen on the Road to New Beginning January 24 had a double preview of future main event matches. Shota Umino got a taste of Tetsuya Naito ahead of February 4 in Sapporo while Shingo Takagi tested Kazuchika Okada before their February 11 IWGP World Heavyweight Championship match, Toru Yano and SANADA rounding out the respective sides. 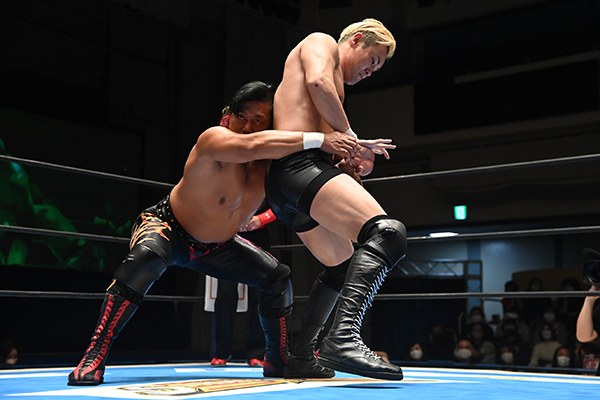 As Naito continued to flatly refuse contact from Umino, it was Okada and Takagi that started the bout, an exchange of holds seeing the world champ with a slight advantage before tags were made. Umino wanted the chance to battle Naito, but El Ingobernable urged tranquilo, bringing SANADA in to taste Shota’s boots before Yano failed in a follow up attempt at a Paradise Lock. 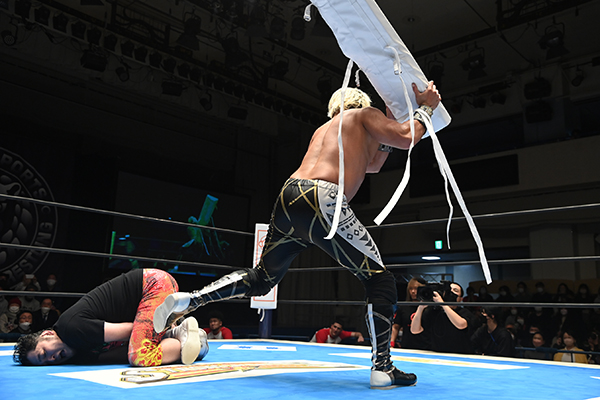 That put Yano on the back foot, much to Umino’s chagrin, until a handful of Naito’s hair led Yano to tag Okada. The Rainmaker came with an extra aggression in his stride and extral salt in his strikes after being embroiled in controversy for the past week, and directed his energy at first Naito and then Takagi; though his Osaka challenger unleashed a crushing suplex, the world champ landed a reverse neckbreaker to finally bring Umino legal.

The Roughneck absorbed a SANADA plancha but landed his exploder suplex variant as he continued to build steam, yet Naito, not SANADA was on his mind. Nearly costing himself the match to get a shot at the non legal Naito, ‘Shooter’ would nonetheless draw Naito into a Destino attempt, blocked and countered with a Death Rider. Moments later, SANADA tasted the same fate, and Umino locked his gaze on the now unconscious Naito as he racked up his first Korakuen Hall main event win in convincing form.