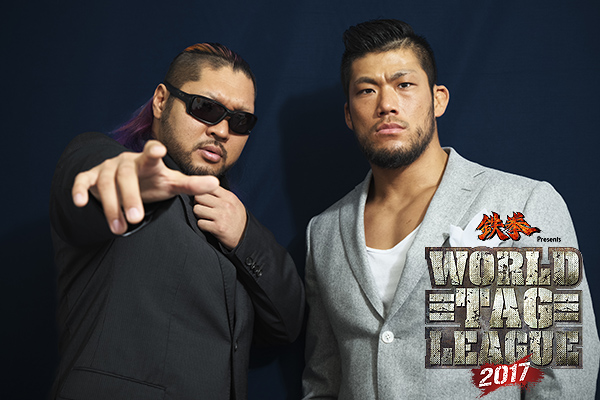 It’s not often that the darkest of horses are the favourites to win the race. Yet EVIL and SANADA are impossible to ignore as potential front runners in block A of the World Tag League. 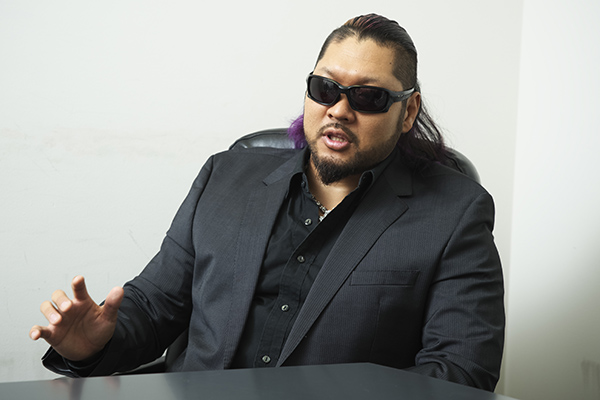 — EVIL, you said you would lead SANADA into battle in this year’s World Tag League to reform your team from last year. What are your goals for the tournament?

EVIL: (laughs) Well, I always say it, right? That I plan to seize control of the IWGP championships, and of New Japan itself? So when I declare that we will rule the World Tag League, my sights are set on the IWGP Tag Team Championships.

EVIL: And with that in mind, there was no better partner to choose than SANADA. It was an obvious conclusion.

— What about you, SANADA? How did you feel to be nominated by EVIL?

SANADA: Well, I feel if you look at LIJ, EVIL and SANADA is the pairing that gels the best. He’s easy to team with.

— You certainly had an impressive record last year in the WTL. You went 5 and 2, but unfortunately didn’t make it to the final.

SANADA: Right. We got all the way near the end, which meant not winning hurt all the more. It can’t go the same way this year.

EVIL: The past is the past. I haven’t given any thought to what happened last year; I’m focussed on this year. And SANADA and I have both improved, evolved since last year. 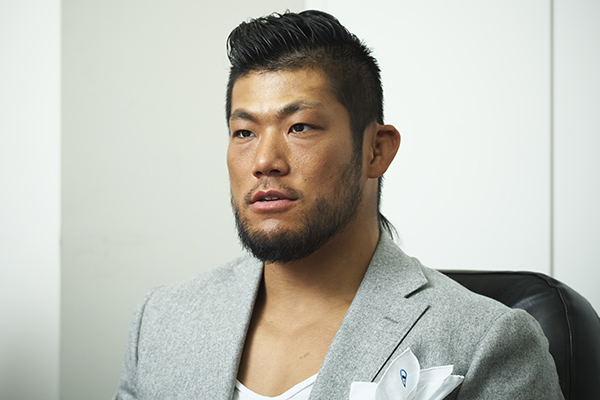 — You mentioned the IWGP Tag Team Championships. It seems in the tag division there’s a revolving door of teams being made and moving in and out..

EVIL: SANADA and I are both singles wrestlers, too. But the Tag Team Championships come with that ‘IWGP’ marking. I want to seize control of everything I can, and I’m interested in challenging for something I’ve never challenged for.

SANADA: And those other teams, they might be capable. They might be good, but they don’t have the ‘it factor’. None of the teams in the division draw eyes to what they do.

— The tag division is somewhat of an afterthought?

SANADA: Right. I want us to overthrow that. I want to improve the image of the tag division. Anyway, for all those guys in the division, it’s the same for them whether they’re tagging or whether they’re solo right?

— You think none of the tag wrestlers have had any success as singles wrestlers?

SANADA: Right. I don’t want it to be ‘those guys in the tag division should only do tags’. Wouldn’t it be cool for the Tag Team Champions to kick ass in singles matches, too? That’s what I want for us.

–That being said, it seems that the fans are expecting you’ll go far in the World Tag League this year.

EVIL: (laughs) Well, there’s no other team in the tournament that’s as noteworthy as us, is there? The two of us shine on every single tour, so it makes sense we take the spotlight as a tag team. 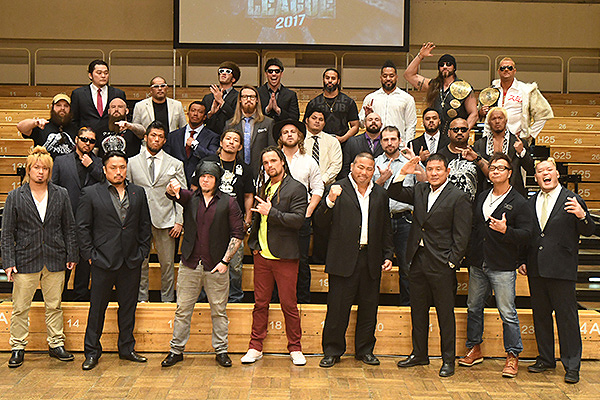 — On that note, and much to Tetsuya Naito’s chagrin, he, Kenny Omega, Hiroshi Tanahashi, and anybody with a match already set for Wrestle Kingdom 12 will not participate in the tournament.

EVIL: I don’t have anything to say about that. The only thing is, I was wondering who Naito’s mystery partner was going to be. And had he entered, there would have been the chance of seeing EVIL and SANADA vs Naito and ‘X’. No matter, because EVIL and SANADA will still be in the spotlight.

SANADA: Honestly, I feel sorry for those wrestlers that they can’t participate. It’s a prestigious tournament, it has a long history.

— You feel sorry for them?

SANADA: Right. The guys who aren’t entered are being told they can’t tag. There are a lot of wrestlers who are only effective on their own and fall apart in a team, aren’t there? Anyway, it’s a shame, I think.

— It seems like you two will receive the attention those wrestlers would normally get.

EVIL: We’re also getting closer to January 4. This is the World Tag League, but it’s also a ‘Road to the Tokyo Dome’ series in a way. With us in this tournament we have to distinguish ourselves. We have to say that this is EVIL and SANADA’s Tag Team tournament, and back that up. 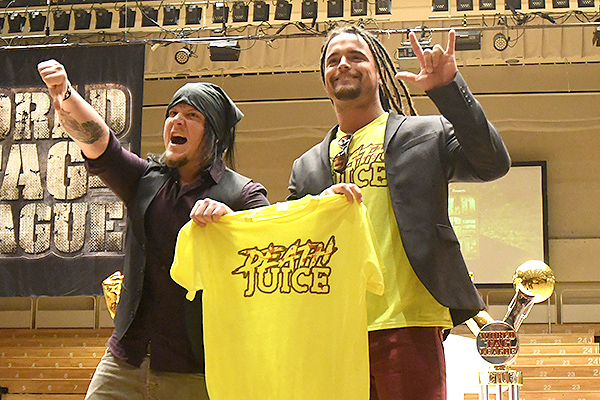 –Well your campaign gets underway with a main event in Korakuen against Juice Robinson and Sami Callihan.

EVIL: I don’t know about Callihan, but Juice has been teaming with Finlay for a long time. Now he’s picked Callihan and left Finlay to team with Kitamura. It feels like a strange choice, to throw away that relationship.

SANADA: I don’t know anything about the new guy Callihan. They were both in NXT, right? You’d think they’d be very American in style. But Juice has shifted and taken on a more Japanese approach lately. So I wonder how well those two will actually work together.

–Ah, they might not actually function well as a team.

EVIL: Well, for the main event on the opening night, we’ll let them step into the big leagues. Let’s see what they can do.

–November 23 in Kobe you face Suzuki and Iizuka. SANADA, you lost to Suzuki in the G1, but what do you think of this pairing?

SANADA: I’ll say this loud and clear; I don’t think they have any chance of winning the tournament.

–You don’t fancy their chances?

SANADA: I don’t see it at all. Can’t picture them on top of the block.

–Suzuki presents his own challenge, but then with Iizuka you have someone who doesn’t care whether he wins or loses, he just creates carnage. How do you feel about him having not faced him much before?

EVIL: I haven’t dealt with Iizuka before. But I will say they can cause as much carnage as they want. At the end of the day, just like in the G1, I will plunge the ‘King’ into darkness. 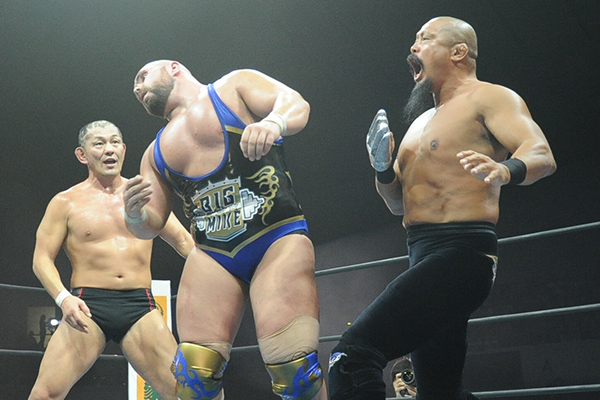 –SANADA, your thoughts on Iizuka?

SANADA: Hm, I think honestly his Iron Finger is the thing I’m most worried about this whole tournament.

–The Iron Finger scares you?

SANADA: Right. I’ve never taken that Iron Finger, so I’m going to be careful to avoid it. But personally, I’m looking forward to that match.

EVIL: With them, the match isn’t just in the ring. It’s all over the arena. In that match you’ll see a side to us you don’t normally get to. Maybe we’ll see SANADA’s crazy side..?